The case against Vladimir Putin 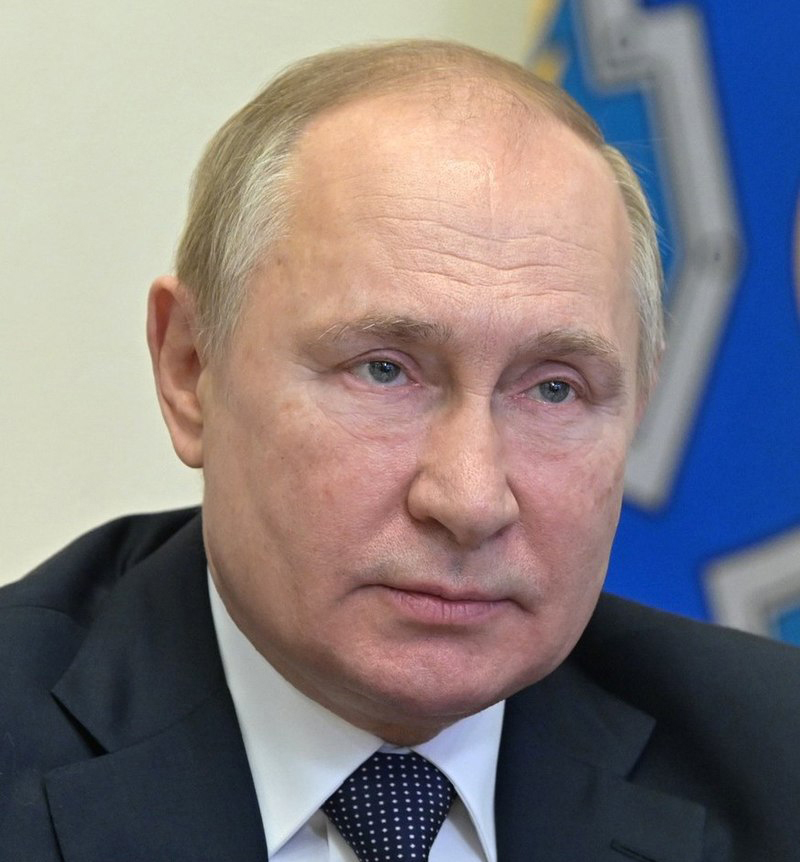 Russian President Vladimir Putin.
Wikimedia
On Feb. 24, 2022, Russian military forces acting on orders from President Vladimir Putin launched an unprovoked invasion of Ukraine, embarking on an indiscriminate campaign of destruction, taking out schools, hospitals, apartment buildings and, as of March 21, killing more than 900 innocent civlians in less than a month.

The invasion, which has also included attacks on nuclear power plants, has drawn international condemnation and unprecedented sanctions against Russia.

“I think he is a war criminal,” he said.

The matter of whether the conflict in the former Soviet republic-turned-bastion-of-democracy constitutes war crimes may seem obvious to most, but “war crimes” and “war criminals” are legal terms with specific standards that must be met before a case can even be tried.

Experts say establishing those standards and getting a case before a judge could take years. Representatives from the International Criminal Court (ICC) are already investigating Russian actions in Ukraine and U.S. officials quickly qualified Biden’s remarks, sticking with the talking point that they came “from the heart.” 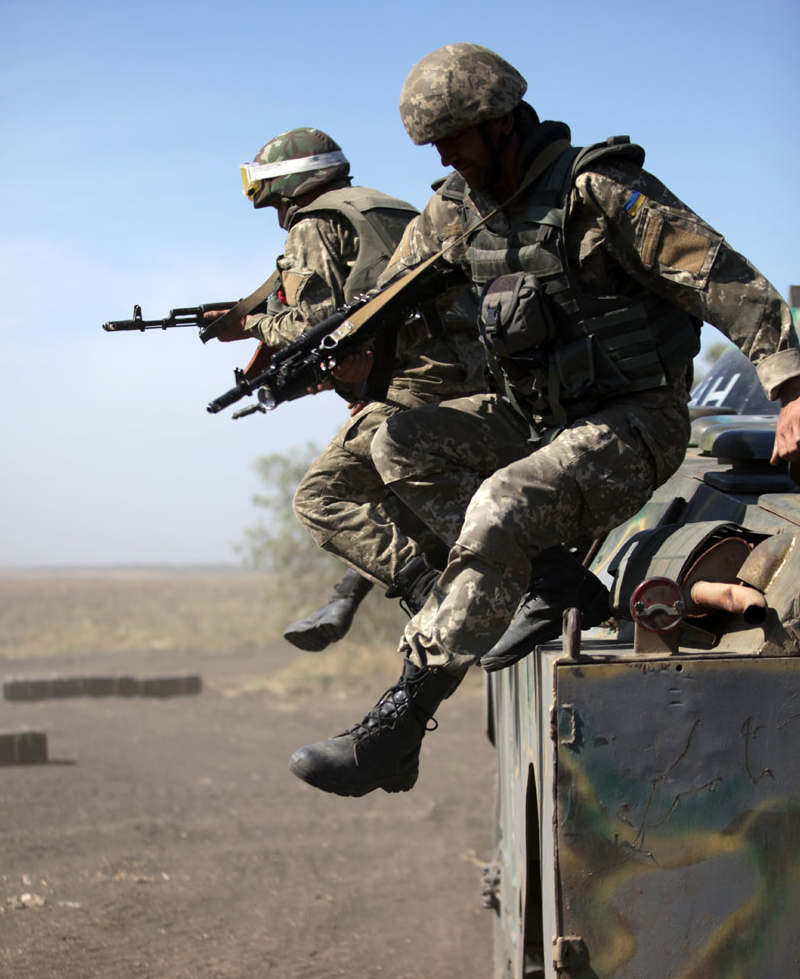 An anti-terrorist exercise in Ukraine, Sept. 12, 2015.
Wikimedia/Ministry of Defence of Ukraine
Created by a 1998 treaty known as the Rome Statute, the ICC operates independently. Many countries—124—are party to the treaty. But there are notable exceptions, including Russia, the United States and Ukraine.

The administration of former president George W. Bush withdrew the U.S. from the treaty in 2002, calling the ICC “fundamentally flawed” because it puts American service personnel at “fundamental risk of being tried by an entity that is beyond America’s reach, beyond America’s laws and can subject American civilians and military to arbitrary standards of justice.”

It is a court of last resort, inspired by the Nuremberg trials.

Though not an ICC member, Ukraine accepted the court’s jurisdiction over incidents on its territory starting in November 2013.

Based in The Hague the ICC’s slate of legislation on genocide, war crimes, crimes against humanity and the crime of aggression is based in existing international laws and agreements that dictate conduct in war, such as the Geneva Conventions.

It is a court of last resort, inspired by the Nuremberg trials, which convicted 161 war criminals—and sentenced 37 to death—after the Second World War. 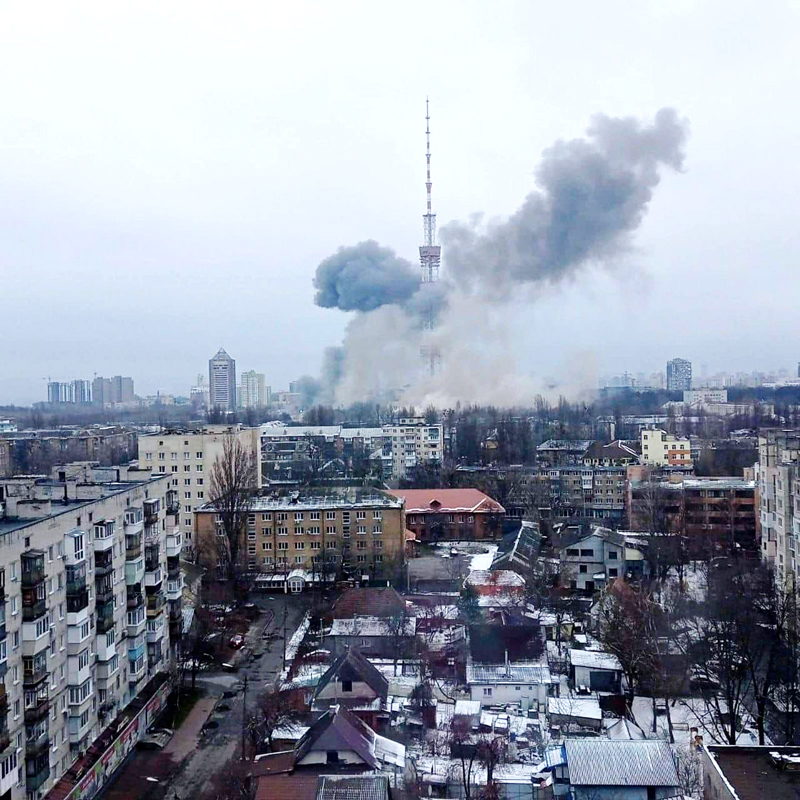 A bomb hits Kyiv during the Russian invasion.
Wikimedia
Serving nine-year terms, the ICC’s 18 judges try people, not countries. Most are leaders and senior officials. The ICC does not conduct trials in absentia and it does not have a police force; it relies on member states to make arrests.

So, even if he were to face prosecution, Putin would have to surrender voluntarily, be handed over by Russia or arrested outside the country—all considered unlikely.

The current probe into Putin’s action was launched at the request of 39 governments, including Canada. The ICC, which was already looking into crackdowns during Ukraine’s 2013-14 Euromaidan protests, has said it will investigate all actions in Ukraine since 2013, including Russia’s annexation of Crimea in 2014. 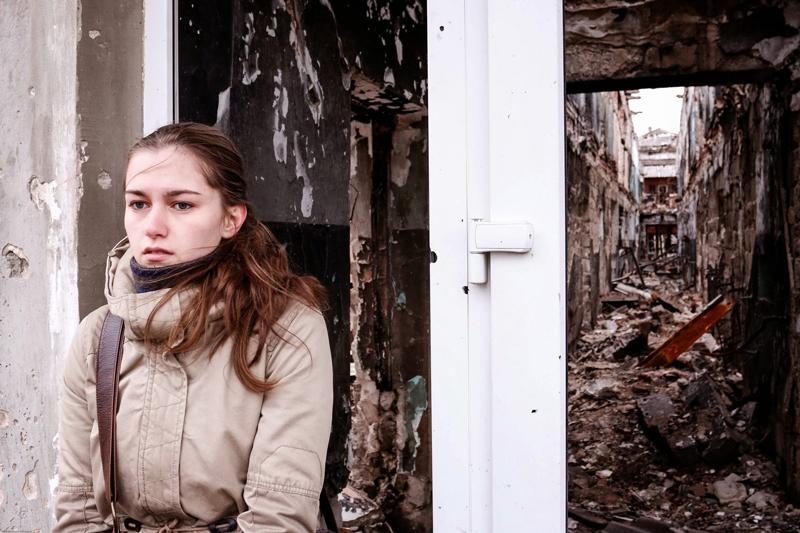 But the court’s impact is debatable. Its processes are excruciatingly slow and it has achieved only a handful of convictions—all of them from post-colonial Africa.

Still, experts insist the current situation in Ukraine is different, mainly because the international outcry is so strong.

“It’s hard to judge the ICC’s investigation based on past practice,” Ryan Goodman, a New York University law professor and co-editor-in-chief of the online forum Just Security, told CNN.

“In the Ukraine situation, the prosecutor is buttressed by an extraordinary outpouring of support from dozens of countries, which I expect will be followed by an infusion of resources.”

Backed by satellite, video and eyewitness evidence, outside experts and governments of NATO countries say Russian troops have violated bans related to attacks on civilians and the infrastructure vital to their survival. Russia also appears to have used cluster bombs and thermobaric weapons, known as “vacuum bombs.” 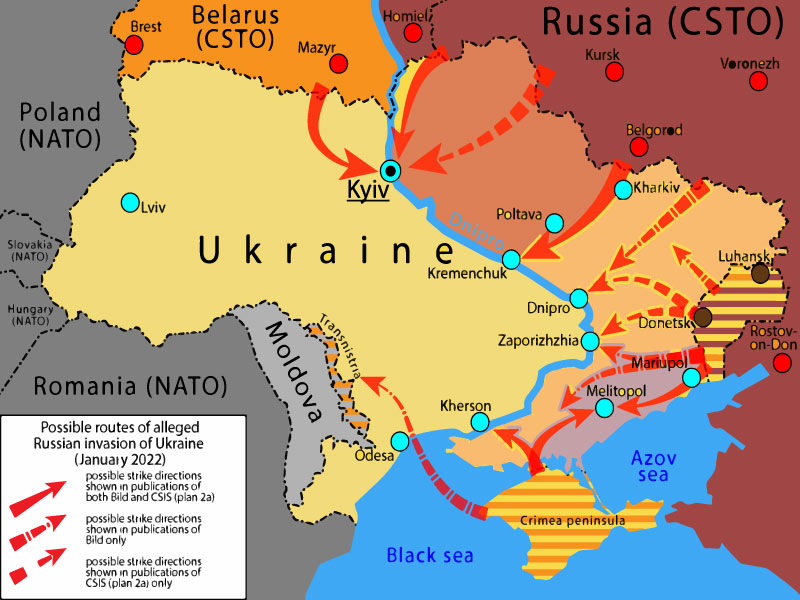 A map depicting possible routes for the Russian invasion of Ukraine from just before the war began.
Wikipedia.org modified by Mauricio Dimate
Neither Russia nor Ukraine has signed an international treaty banning cluster munitions, and thermobaric weapons that suck oxygen from the air are not formally outlawed. But the consensus of Western opinion is that Russia has used both weapons on civilians, which would be a crime.

There was evidence that Putin was even prepared to use chemical weapons, another no-no in international law.

In launching the ICC investigation on Feb. 28, the court’s chief prosecutor, Karim Khan, said that a preliminary assessment by his office, conducted mostly in 2020, has provided “a reasonable basis to believe that both alleged war crimes and crimes against humanity have been committed in Ukraine.”

But Bloomberg’s Erik Larson points out that the flood of video recordings and eyewitness testimony doesn’t amount to a hill of beans in the court’s eyes if the evidence can’t tie specific strikes to specific individuals.

Investigators are on the ground in Ukraine trying to do just that.

Putin and the Russian oligarchs who bankroll him are already paying a high price for the invasion. Sanctions against Russia have caused a 30 per cent drop in the ruble, restricted access to foreign accounts and international banking and, according to The Financial Times, are “blowing holes in the Russian economy.”

There are trade, transport and travel restrictions on Russians and Russian broadcasts have been shut down in many countries, including Canada.

The international community has taken a raft of measures against the oligarchs, freezing more than US$300 billion they had stashed away in foreign bank accounts and seizing more than $1 billion worth of their super yachts among them.

Then there are the costs to Putin’s military in lives and equipment. This week, the pro-Kremlin Komsomolskaya Pravda newspaper quoted the Russian defence ministry as saying that 9,861 Russian soldiers had been killed and 16,153 wounded in little more than three weeks of fighting. The story was quickly taken down, but it appeared to be the first confirmation from Moscow that losses are much greater than Putin has been prepared to acknowledge.

Her maternal grandparents were born in Ukraine and she studied at the University of Kyiv as an exchange student. She launched her journalism career there and later became The Financial Times’ Moscow bureau chief.

As a journalist, Freeland didn’t hold back in her frequent, biting criticisms of Putin, describing the Russian leader as an authoritarian, an autocrat and “really dangerous.”

When she was named among 13 Canadians barred from entering Russia for supporting sanctions relating to its 2014 annexation of Crimea, she tweeted:

“Love Russ lang/culture, loved my yrs in Moscow; but it’s an honour to be on Putin’s sanction list….”

She has called the invasion an atrocity and told a news conference in early March that the Ukranians have shown themselves to be “a very, very determined people who have decided they’re willing to fight and die for democracy and for freedom.”

“Seeing the Ukrainians stand up and say, ‘We may be smaller than you, you may have a fierce army that is bigger than ours, but we will not submit.’

“I think that is what has been transformative, and I’m very proud of them. I’m very inspired by the people of Ukraine, and I think the whole world is.”