He could be blunt, bombastic and cringingly irreverent. He was also smart, generous, and always, always interesting.

Like virtually all of the most talented, committed and absorbing people I’ve known, Matthew Fisher was a human full of quirks and contradictions. He died in Ottawa on April 10 after a short battle with liver disease. He was 66. 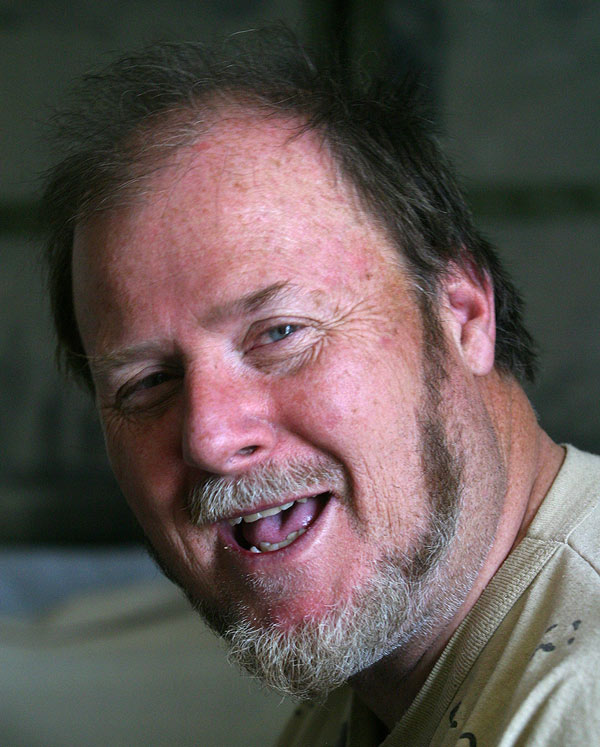 Matthew Fisher in Kabul in 2003.
Stephen J. Thorne
He was without doubt Canada’s most travelled and seasoned foreign correspondent of the past half-century—he’d been to 170 countries (only 193 exist) and covered 20 wars in 35 years.

Like my dear friend Garth Pritchard, who died a year earlier almost to the day, Matthew did not suffer fools gladly, and he wasn’t afraid to say so. Interestingly, he and Garthy, who’d seen more than his share of war zones, shared a grudging respect but, beyond that, they did not get along all that well.

Folks either loved or disliked Matthew—mostly the former; there was no middle ground. When I asked all the former winners of the Ross Munro Media Award for defence reporting to endorse my nomination of him for the 2007 prize, only half did. He won it, and there was no one—except maybe Garth—more deserving.

His late mother Barbara was there at the Vimy Gala in the Canadian War Museum’s Lebreton Gallery, surrounded by tanks and trucks and artillery pieces, when he received his award for a career of inspired, courageous reporting.

She had joined the navy during the Second World War, serving in London as a coder/decoder for the transatlantic convoys bringing men and materiel to Britain and Russia. Back in Canada, she was a librarian and English language teacher, and was involved in her husband’s political work.

His father was the late Doug Fisher, a WW II veteran and CCF and later NDP member of Parliament for Port Arthur, Ont., in the late 1950s and ’60s. He went on to become the NDP’s deputy leader before leaving politics to write political columns. He was known as the dean of the parliamentary press gallery.

He picked up languages by a sort of osmosis and loved to show them off.

Matthew became the quintessential foreign correspondent, a sartorial disaster who sacrificed everything—relationships, stability, a family life—for his craft. He never married, but cherished family: his parents, his four brothers, their families.

Over the years, he lived in Moscow, Jerusalem, Hong Kong—wherever the four winds, and the stories, took him. In an age when overseas reporting by Canadian media has become less and less common, Matthew had the most impressive passport I’ve ever seen, bulging with extra pages filled with stamps. 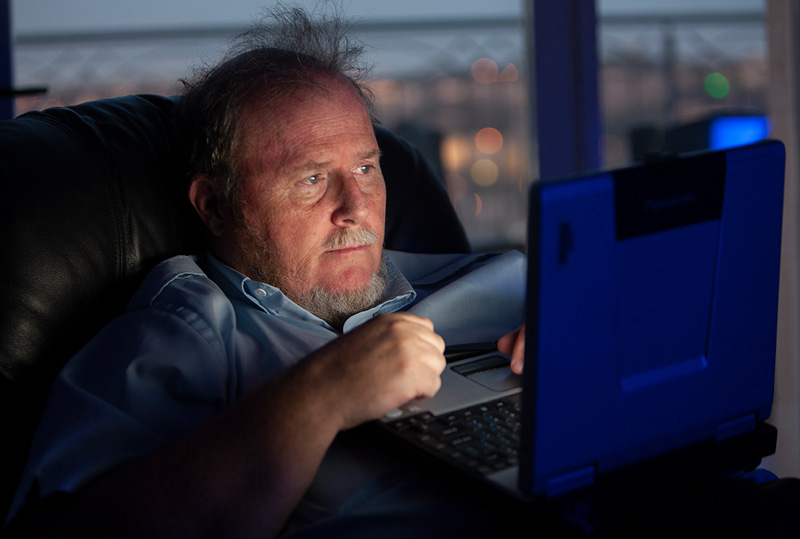 Fisher at work in his apartment just outside the walls of Old Jerusalem in 2008. Office ergonomics were not his forte.
Stephen J. Thorne
He picked up languages by a sort of osmosis and loved to show them off. Dinners out with Matthew were always an experience. The food was exotic, the stories absorbing, the names impressive. He would chat with servers, often in their native tongue, engaging them, bursting with personality and warmth.

“He would ask the waiter his name, talk to him in whatever language happened to be prominent, order for you, and then tell you everything you needed to know about the world. And then some,” wrote the Toronto Sun’s Steve Simmons.

We were bunkmates over several years in Afghanistan, trading information, sharing resources, bitching and complaining, laughing and working.

He acted as my host and guide when I visited Israel in 2008. He was living opposite the old city of Jerusalem, just a few hundred metres away from its walls, with a spectacular view of the Dome of the Rock. We spent days exploring places most visitors wouldn’t go and visiting his favourite haunts, eating and listening to his stories. 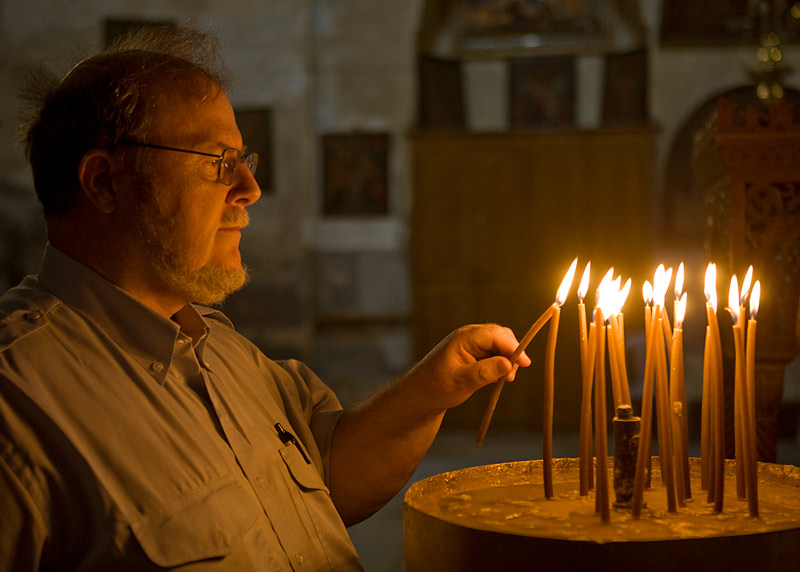 Fisher at the Church of the Nativity in Bethlehem in 2008.
Stephen J. Thorne
“He had a knack, something between coincidence and luck, for being in the right place at the right time, from a journalist’s perspective,” his long-time employer, the National Post, reported. “He was on vacation in Los Angeles in 1989 when freeways collapsed in an earthquake, and on vacation in India in 1984 when Indira Gandhi was assassinated. He was in Washington, in a hotel near the Pentagon, when it was hit by a plane in the 9/11 terror attack.”

He joined The Globe and Mail in 1984, was posted to Moscow and covered the collapse of the Soviet Union and the fall of communism in Eastern Europe. He reported on Nelson Mandela’s election in South Africa and the funerals of Yasser Arafat, Princess Diana and, a week later, Mother Theresa.

His father was chair of Hockey Canada’s board of directors from 1974-1977 and was instrumental in creating the Canada Cup, as well as the 1972 Summit Series between Canada and the Soviet Union. Matthew inherited his love of hockey.

He covered multiple Olympics, Stanley Cups, and world hockey championships. He reported his first war by happenstance in 1973 when, as a teenager, he diverted from writing about safaris to cover fighting in Mozambique’s war of independence.

He once interviewed a kidnapper on a park bench in Caracas.

He made numerous trips into Afghanistan and was embedded with a tip-of-the-spear unit of armoured U.S. Marines during the 2003 Iraq War. He received invitations to their annual balls each year since. 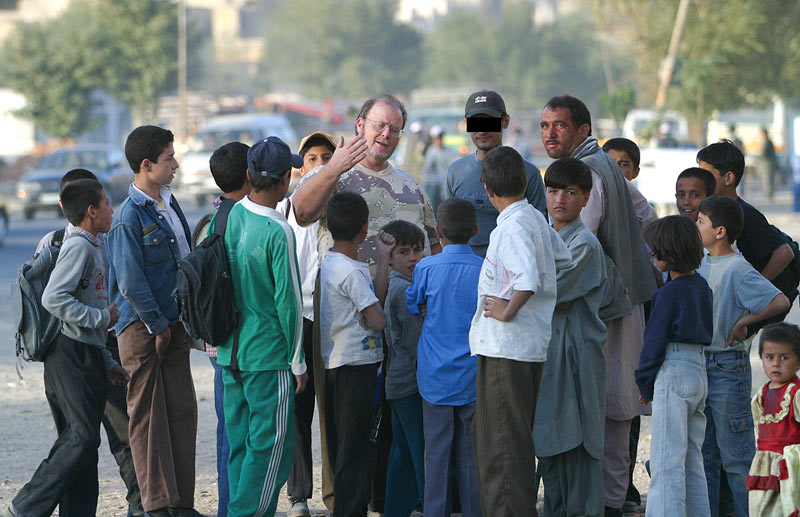 Fisher holds court on a Kabul street in 2003.
Stephen J. Thorne
“Fisher’s stories would arrive in the various newsrooms he served at strange hours, on some other time zone,” wrote the Post. “This created an allure among homebound reporters and editors, many of whom never met Fisher face to face, but knew his copy well, with those impossibly remote datelines, newsroom lingo for the place where a story is reported, stamped at the top.

“Exotic ones are a point of professional pride, and few reporters collected more. Fisher had filed from aboard the USS Abraham Lincoln and … HMCS Montreal, from Al Udeid and Kuwait City, Leeds and Karachi, Jerusalem and Ramallah, Jakarta and the North Pole. He once interviewed a kidnapper on a park bench in Caracas.”

His final National Post report was filed from the Philippines in 2017. It was dispatched from Iligan City, under martial law at the time.

“There has long been a sense of dread that the savage urban war might at any moment spill over into a broader conflict,” he wrote.

He worked for the Postmedia newspaper chain, its predecessor Canwest News Service, Sun Media, and others. A few years ago, he bought a house in Kanata, west of Ottawa, and joined the Canadian Global Affairs Institute.

At long last, it seemed, he would be able to indulge in the game he loved. For years, he’d held season-ticket packages to the Ottawa Senators, distributing them among family when he couldn’t make the trip to Canada for a homestand.

Even after his overseas career ended, however, freelance work still took him away on assignments. I don’t think he ever got his fill—of hockey or travel.

He called me up once and invited himself over for dinner, insisting he’d bring the food. I was at a low point and I think he knew it. He brought corn on the cob—bags of it—and taught me how to cook it in the microwave, in the husk.

We talked about journalism, he lamenting the state of Canada’s newsrooms and our respective places in, or out of, it. Despite his own bitterness and discontent as he confronted the end of his overseas career, he was encouraging and supportive.

Ever the ruthless political pundit, he was gearing up to contest the nomination for Conservative Party of Canada candidate in Kanata-Carleton when his health forced him to withdraw.

“Laureen and I are saddened to learn of the passing of Canadian journalist Matthew Fisher,” former prime minister Stephen Harper tweeted. “A great writer with a passion for covering complex international issues, his voice will be missed.

“Our prayers are with his family and loved ones during this difficult time.”

The Canadian Forces tweeted: “He went everywhere to tell the story.” Bob Rae called him a “fearless journalist.” Retired CBC correspondent Terry Milewski called him “the man who’d been everywhere.”

Toronto Star columnist Tim Harper described Matthew as a lone wolf who went his own way and did his own thing.

“He earned that right because he had an encyclopedic knowledge of the world and a spine that allowed him to wade into very dangerous areas, assess the situation and emerge unscathed with an exclusive story,” said Harper.

I knew him as a friend, a colleague, and an adviser—but most of all a friend, a good one with whom I’d laughed and argued, suffered and triumphed. He will be missed. 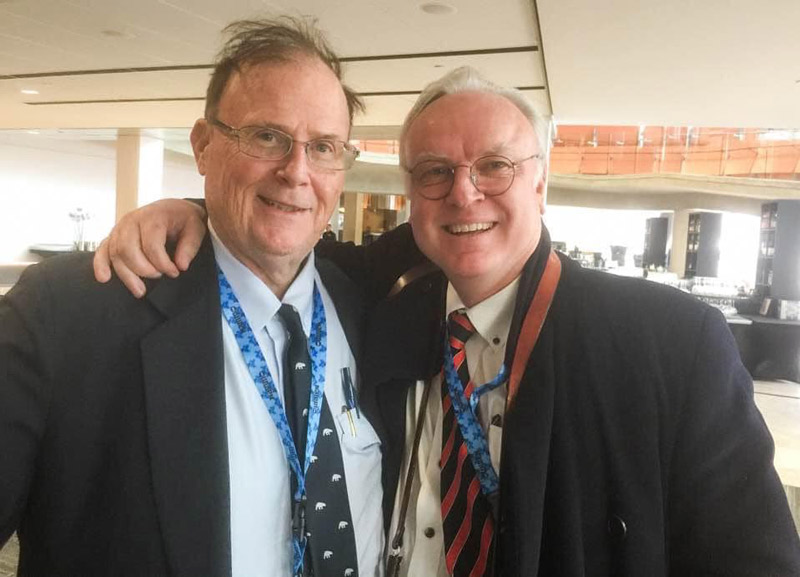 Fisher with the author in Ottawa in 2017.
Stephen J. Thorne