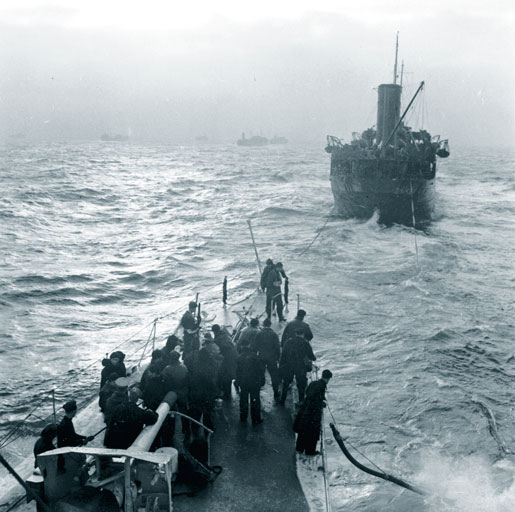 Through the crisis of the Atlantic war in 1942, the Royal Canadian Navy worked much harder than its British and American allies realized.

In fact, the RCN ran its escort fleet ragged trying to keep up with demands for more escorts and more convoy routes.

Had this been the RCN’s only problem in 1942 it might have muddled through. But the makings of a perfect storm of problems loomed on the horizon that spring. That storm would finally break over the RCN in the fall, with dire and lingering consequences.

Some evidence of the problem was manifested by the navy’s experience in the Gulf of St. Lawrence: not enough escorts, poor training, outdated equipment and no compensating U-boat kills. But this theatre was inconsequential to the larger war effort—however much it meant to Canadians. And in truth, the losses to local convoys were negligible, only 1.2 per cent of the ships in the QS-SQ series. Perhaps for that reason the collapse of the navy’s most prestigious effort in the mid-ocean, where losses to Canadian-escorted convoys were exceptional by the end of 1942, remained a secret for 40 years. Certainly they did not go unnoticed by our Allies, and they could not easily be explained away by problems of constricting geography and complex asdic (sonar) conditions. It was along the North Atlantic Run where the strain of 1942 fully manifested itself and where the reputation of the RCN among its Allies suffered its second and most serious blow.

The roots of this second operational crisis lay, of course, in the global crisis of early 1942. Indeed, ‘Taking a hit for the team’ was very much the theme of Canadian naval operations that year. It could hardly have been otherwise, and senior Canadian naval officers knew it. The whole Allied cause was in a tailspin. The RCN had nothing to throw into the maelstrom of the Pacific, so the best thing it could do was to ease the burden on the major Allied navies in the Atlantic. But like the other Allied navies, the RCN pinched and pared away at its mid-ocean commitment as well to meet these distant demands.

By the spring of 1942, the Mid-Ocean Escort Force (MOEF) was down to just 11 groups: six British, four Canadian and one nominally American. The regular track of this force cleaved tightly to the Great Circle route, the most direct and economical route possible. Fortunately, the U-boats were still busy elsewhere.

Leonard Murray, now a rear-admiral with the new title of Flag Officer Newfoundland hoped to use the quiet time to improve the efficiency of his fleet. He pressed for the modernization of his corvettes to equip them for the kind of war they now fought in the mid-ocean (Trying To Stay Ahead Of The Pack, May/June). However, this was not yet RCN policy, and so Murray’s poorly equipped short foc’sle Canadian corvettes carried on, plowing their way back and forth from St. John’s to Londonderry. Indeed, as the war expanded and the American contribution to the MOEF withered to barely a token force, Murray’s command worked harder to pick up the slack.

Destroyers remained his most significant escort shortage in 1942. The RCN never had many to begin with, but the change in the escort arrangements, which created the MOEF in February, reduced the number suitable for his command. As noted previously in this series, only the six surviving River-class ships and two four-stackers had the range. This left just enough destroyers for the RCN to meet its commitment of two for each of its four ‘C’ groups. However, there were no spares; nothing to cover refits, training, mechanical problems or damage. The British helped by assigning several of their own long-ranged Town-class destroyers to ‘C’ groups, although these were mechanically fickle.

Destroyers were essential to mid-ocean operations because they provided the only effective strike component for an escort group in an area where the absence of Allied air power permitted Wolf Packs to operate on the surface with impunity. 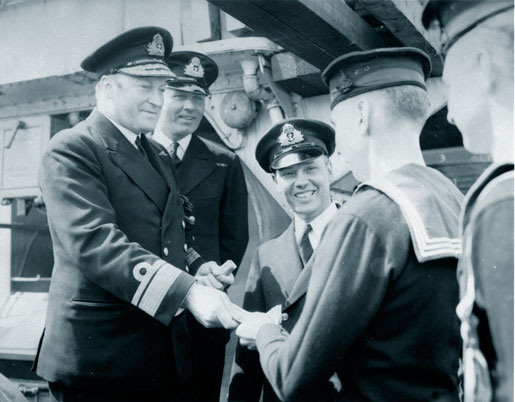 Rear-Admiral Leonard Murray presents awards to the crew of HMCS St. Croix for sinking U-90 in July 1942.
PHOTO: LIBRARY AND ARCHIVES CANADA—PA037456

Murray certainly understood what was happening in his theatre of war, and sought ways to reinforce threatened convoys, especially in the fog-shrouded waters of the Grand Banks. He and his officers were never short of ideas, but they lacked the resources and the clout to put them in place. Fortunately, plans for RCN “support groups” in the northwest Atlantic were never abandoned. Commander James D. “Chummy” Prentice was doing just that with his training group in September 1941 when it helped convoy SC-42, and sank U-501.

In the fall of 1941, Murray wanted to regroup his River-class destroyers into a support group for the western Atlantic, but the idea was abandoned when the British objected. The American commander of the northwest Atlantic, Vice-Admiral R.M. Brainard at Argentia, Nfld., also objected to Murray acting independently in an area over which he exercised operational control.

By 1942 no less than nine separate national and service commands overlapped in the northwest Atlantic; a situation that would eventually prompt a crisis. Murray’s problem was that he was simply a “force generator,” the British and Americans controlled operations—even those of the RCN off the Canadian coast. As American strength in the northwest Atlantic drained away in early 1942, most of what they commanded, including virtually all of the RCN, was non-American. The British attempted to reassert their operational control of North Atlantic convoys westward to Newfoundland when the MOEF was established, but the Americans refused to budge.

For the time being the USN ran the show, and Murray’s options for action were limited.

So Murray had to fudge a support force for his command by re-establishing Prentice’s training group in April 1942. During the next four months, Prentice trained 20 corvettes doing work-up training, and sailed in support of nearly as many convoys on the Grand Banks. The training group was a brilliant idea. The scheme prompted complaints about “freelance” operations from Brainard, but Murray ignored them. Only the further expansion of RCN operational commitments in August—the Canadian commitment to Operation Torch (the Allied invasion of French North Africa)—forced the abandonment of Murray’s support/training group once again. The need for it did not diminish, however, and eventually the Americans and British established the Western Support Force in the fall to do exactly what Murray knew had to be done a year earlier.

There was no question that RCN-escorted convoys needed all the help they could get. Not only did the ‘C’ groups suffer from a chronic shortage of destroyers and a lack of modern equipment, Canadian escort operations in the mid-ocean were still concentrated around slow convoys. This, too, was a legacy of arrangements made in 1941 that seemed good at the time.

When the USN entered the escort business in September 1941 their destroyers took on the fast convoys between Newfoundland and Iceland while the corvettes of the RCN escorted the slow ones. British escort groups then protected convoys of all speeds between Iceland and Ireland. When the MOEF was established in February 1942 and as the USN began to disappear from the North Atlantic, the American task of escorting fast eastbound convoys was largely picked up by the RN.

In the last half of 1942, for example, 80 per cent of the HX convoy series were British escorted although they made up only roughly 65 per cent of the mid-ocean force. The bulk of slow eastbound convoys over this same period, 14 out of 24 of the SC series, were escorted by the RCN. The British did escort more than their share of the slow westbound convoys (17 out of 21), while the RCN got the lion’s share of the nominally fast westbound convoys. In practice there was little to choose between westbound types, which all travelled in ballast against prevailing winds.

The net result was that the Canadians escorted the majority of the slowest and most vulnerable convoys on the North Atlantic run in 1942.

The lack of modern equipment, shortage of destroyers, the slaving of convoys to the Great Circle route because of the limited range of all escorts, the escorting the slow convoys, the continued absence of air cover in the mid-ocean, the blackout in Ultra intelligence on U-boat operations that started in February—not to mention the command muddle—all had the makings of a perfect storm.

But in early 1942, when so many things were going so badly around the world and things were so quiet in the mid-Atlantic, it would have taken extraordinary powers of perception to see where the RCN’s MOEF role was headed. Murray, certainly, was anxious, but in mid-1942 no one was willing to fix something that was not yet broken. And in the fair weather of a northern summer the ‘C’ groups of the MOEF initially did well when the Wolf Packs returned.