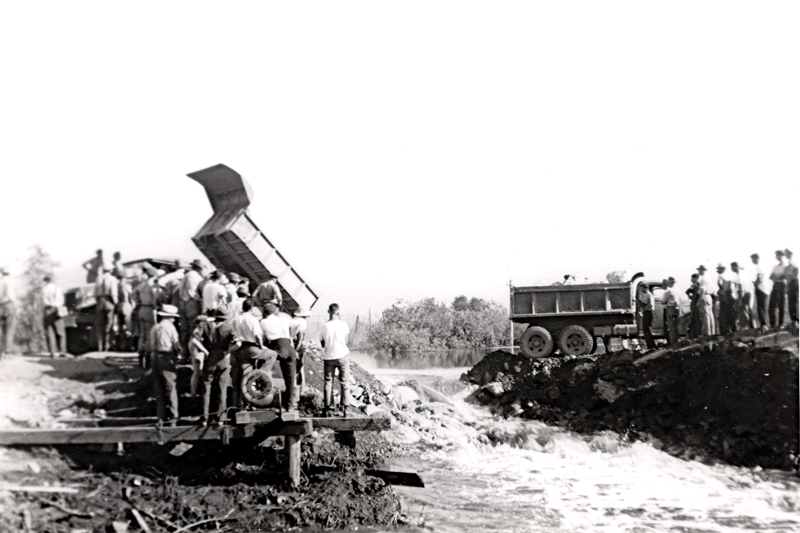 Volunteers repair the dike on Semiault Creek, a Fraser River tributary, during the 1948 floods in B.C
Photograph courtesy of the Chilliwack Museum and Archives/PP503666

Canada’s military faced its first modern mission in response to a domestic natural disaster during the 1948 once-in-a-century flood in southern B.C.

It is virtually a given that the Canadian Armed Forces will be on hand when disaster strikes at home. Whether it’s wildfires, crippling ice storms or massive flooding, all arms may be called to provide assistance and relief.

It has not always been so, but the Second World War was a training ground for more than just combat. The permanent and reserve units of the post-war era were equipped and trained for many tasks. They were flexible enough to help civil authorities in ways that would have been unimaginable in the 1920s and ’30s. Operation Overflow in 1948 was the first opportunity to show it.

The B.C. mountains came under an unusually heavy snowfall in the winter of 1947-48, while March, April and early May were unseasonably cool. In late May, southern B.C. experienced a heat wave accompanied by heavy rains. The result? Significant runoff fed swelling rivers. On the Columbia and Kootenay rivers, damage was isolated to the Kimberley, Trail, Castlegar and Creston areas. The rich agricultural Fraser Valley, however, bore the full force of the flood.

Army personnel were first to respond when, on May 23, civil authorities asked for assistance in the Kimberley area. Military support increased markedly from May 25 onward, with the Red Cross initially co-ordinating the response.

By May 31, the severity of the situation called for unified operations. Premier Byron Johnson empowered the commanding officer of the British Columbia area, Colonel Thomas E. Snow, to co-ordinate all response measures, using both civil and military resources.

By this point, the army had mobilized about 620 members of the active force and 682 reservists. The latter were drawn from many units, notably the Royal Westminster Regiment, Seaforth Highlanders and numerous artillery, engineer and signals units. The Forces’ contingent peaked at 2,987 personnel (active and reservists) on June 12. They worked alongside some 680 civilian labourers and 3,000 civilian volunteers.

Snow chose to divide the main flood area into seven sectors. Each sector was responsible for its own operations. The tasks included diking, evacuating people and livestock, providing shelter and food for evacuees, maintaining communications by radio and landline and even patrolling to prevent looting. Equipment ranged from earthmovers and trucks to more than 100 kilometres of telephone cable. Provisions were made, too, for vast quantities of tents, blankets and bedding. 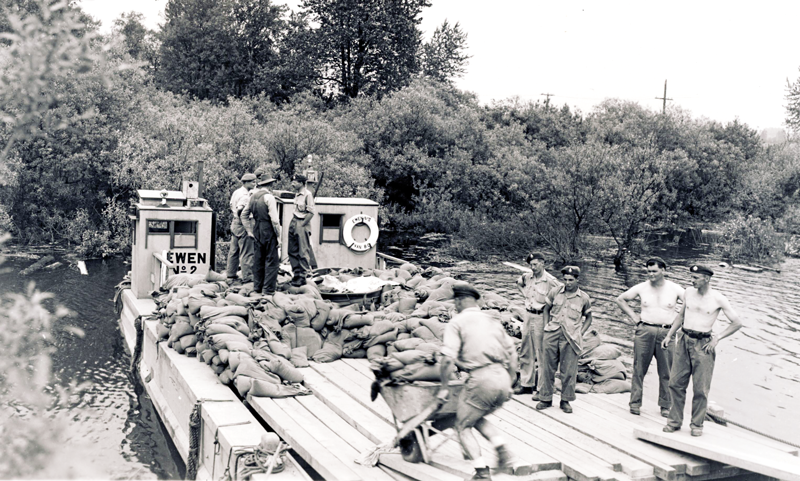 Operation Overflow was a tri-service undertaking, the defence minister having given Snow access to all military resources

Operation Overflow was a tri-service undertaking, the defence minister having given Snow access to all necessary military resources.

The navy moved HMCS Antigonish from Esquimalt to New Westminster as a command ship. A summary of navy resources listed 50 vessels. Most were auxiliary craft supplemented by three Royal Canadian Air Force vessels. They were used for police patrols, evacuations and to transport sandbags. Three vessels were in the Hatzic area transporting feed to livestock and maintaining the supply of milk to Vancouver.

Wartime landing craft found peacetime duties, too: a report noted “400 cattle and 300 sheep evacuated from Deroche area, where cattle are being rounded up and collected from flooded farms; milk is also being taken out by Auxiliary craft.”

In the same region, two river tugs cleared away a log-jam that was threatening the Dewdney bridge. When a radio transmitter at Sumas was flooded, the Esquimalt-based HMCS Ontario oversaw both naval and civilian marine traffic control, as well as commercial radio transmissions.

“If the flood was not such a tragedy, Operation Overflow could be considered as magnificent training operation.”

On May 25, the RCAF used two Canso aircraft to deliver tents and other supplies to Cranbrook. Airlifting of sandbags began on May 27—40,000 on the first day, 60,000 the next and thousands more daily until June 14. 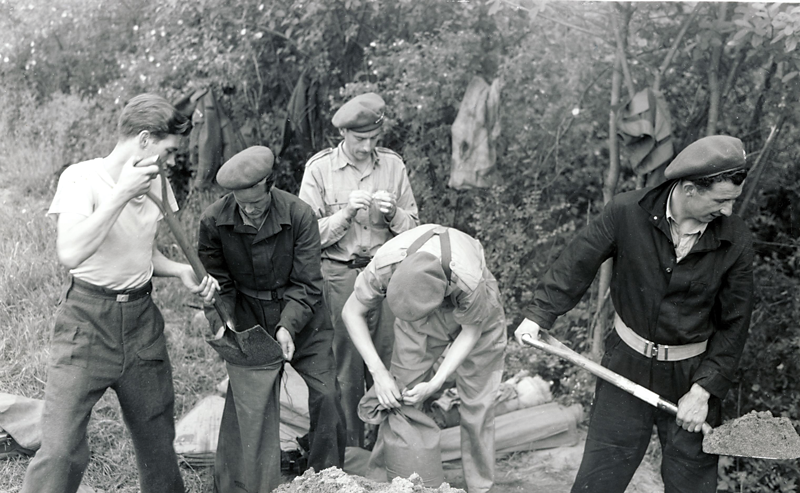 To meet the emergency, the air force cancelled all but its most vital flights. Older Dakotas and Lancasters, plus new North Star aircraft, were pressed into service after being drawn from across Canada. For instance, 103 Search and Rescue Flight in Nova Scotia offered its Lancasters until mid-June when the flooding began to ease. The RCAF’s No. 12 Group, commanded by Group Captain Z.L. Leigh, was responsible for most operations; he was able to call on resources from Air Transport Command (Rockcliffe) and Northwest Air Command (Edmonton).

Army specialists were airlifted into the area, along with radio equipment and medical supplies. In one day, aircraft dropped 2,500 pounds of food to Deroche; 3,000 loaves of bread to Hope; 12 tents to Agassiz; 1,000 sandbags to Barnston Island; and 2,000 sandbags and pumps to Keremeos. There would be many similar days, with bad weather in the mountains curtailing the work only once, on June 11.

Apart from transport operations, the RCAF also carried out aerial reconnaissance and
photography to guide support efforts. On June 3, for example, one Canso and one Dakota reconnoitred the Fraser as far as Hope. Ultimately, some 29 aircraft and 400 aircrew were dedicated solely to Overflow. Station Abbotsford became an evacuee centre; RCAF personnel estimated that they supported more than 1,000 evacuees, plus uncounted heads of livestock. 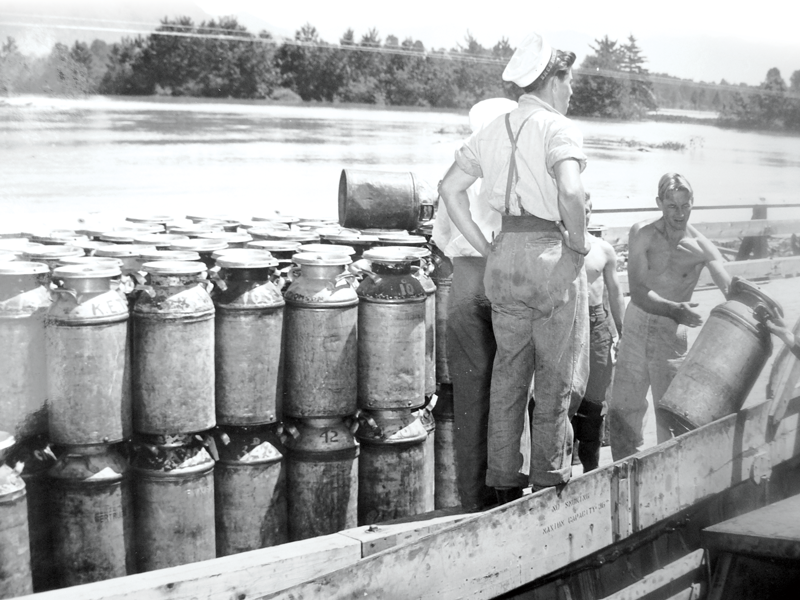 Milk cans are loaded onto a Royal Canadian Navy landing vessel near Deroche
LAC; Photograph courtesy of the Chilliwack

Not all support went smoothly. A naval officer in one sector reported that it took two days for the RCAF to conduct air reconnaissance of the flooded area and then to report only that they were successful in doing so—but not actually providing the information from the mission. Fortunately, noted the officer, commercial pilots offered to make reconnaissance flights between passenger trips, and they were much more valuable, ultimately confirming a section of river near Agassiz was not passable.

Once the flood levels began to drop, reservists were subsequently released. There had been pressure from their families and employers to return home as quickly as possible. In total, Western Command had dispatched some 471 personnel to B.C.; these came chiefly from the Princess Patricia’s Canadian Light Infantry and the Lord Strathcona’s Horse (Royal Canadians). Most had arrived by air and returned to their bases by rail. 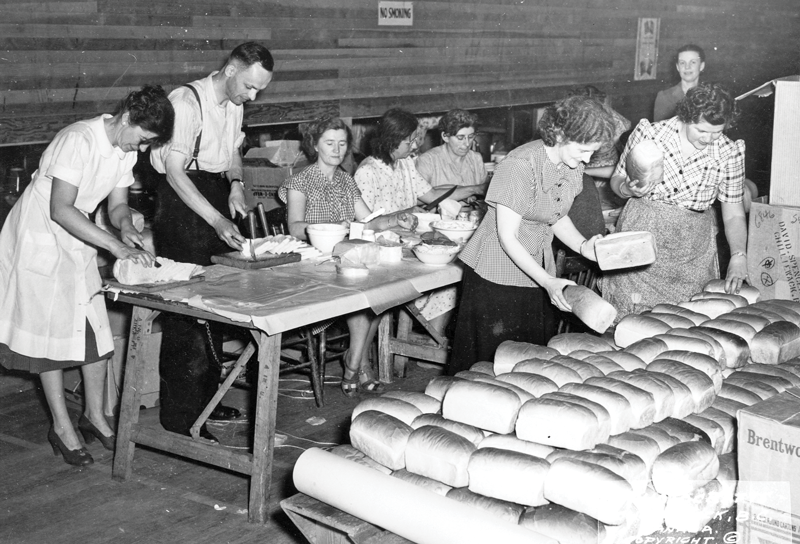 On June 29, B.C.’s attorney general announced that the flood danger had passed. The troops started to withdraw the next day. “If the flood was not such a tragedy,” said Lieutenant-Commander C.A. Law, “Operation OVERFLOW could be considered as a magnificent training operation involving both Three Services and Civilians co-operating together in an efficient manner.

“This brought out, as if in war, the true value of every officer and man. It made them develop their initiative and fend for themselves, their enemy being the flooding water of the Fraser.”

PrevPrevious ArticleThe Parliament bombing of 1966
Next ArticleWarfighting at Mont SorrelNext