Veterans’ beds are left vacant while government rules prevent other veterans in need of long-term care from using them, delegates to the 64th Newfoundland and Labrador Command Convention were told in St. John’s.

“Pavilions are open to First World War, Second World War and Korea War veterans only. Due to the depleting number of these veterans, pavilions are not [at] their full capacity,” Veterans Service and Seniors Committee Chair Frank Sullivan told the 75 delegates. “This is a major concern as there are other veterans who require long-term care and are unable to access it because of these restrictions.” 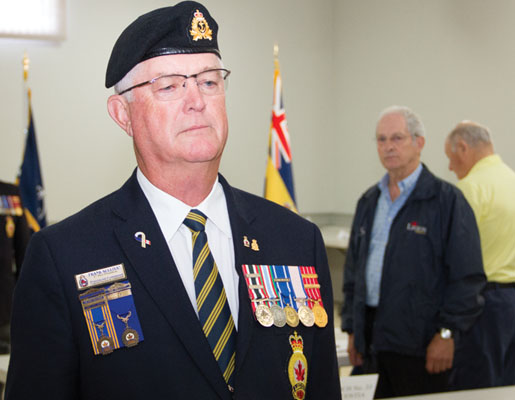 Newfoundland and Labrador has pavilions with long-term care beds contracted by Veterans Affairs Canada in St. John’s, Botwood and Corner Brook. Sullivan reported that, in March, all 28 of the veterans at the Caribou Memorial Veterans Pavilion in St. John’s were moved to the rooms in the two units on the second floor. This left the 21-bed unit on the third floor vacant. “It must be remembered that the room assigned to each veteran becomes their home and it was an emotional and difficult time for everyone involved,” reported Sullivan.

However, expressing that concern to VAC representatives proved problematic at the convention. Although Director General of Field Operations Charlotte Bastien
was present for the wreath-placing ceremony, she said she  was not allowed to address delegates because of the federal general election underway.

Opening ceremonies followed inside the branch where Fagan spoke of the Legion’s work. “The Royal Canadian Legion is a very, very important part of Newfoundland and Labrador. Looking after our veterans and seniors, looking after cenotaphs, the work of the Legion can be seen far and wide.”

In business sessions, Petten reviewed his term in his President’s Report. Among the highlights was attending the dominion convention in Edmonton as president, where a resolution from Newfoundland and Labrador Command was passed accepting RCMP members as veterans. This was following the death of three Mounties in Moncton, N.B.

He also praised the work of the ad hoc committee, formed after the 2013 convention in Gander, which looked into why Canadian Armed Forces members and veterans were not joining the Legion. “This committee did excellent work and compiled a well written report that was presented to command. This report has already been acted on. A new committee will be formed under the chairmanship of the president with funding that has already been budgeted. At the end of the day, it is hoped that more and more current and former members of the CAF will see the benefits that the Legion has to offer and become members of this great organization.” 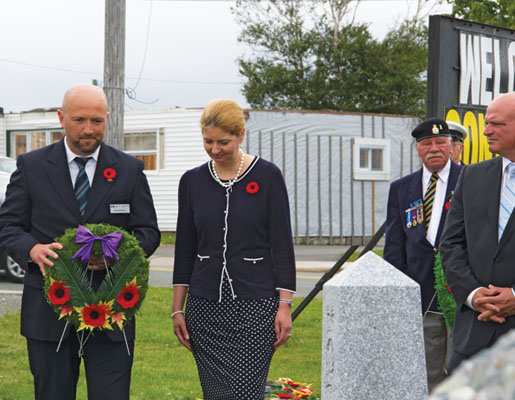 Moore spoke of concerns at Dominion Command, noting, “We are losing too many of the members who have already come through the door. Any man or woman who served in uniform should be welcomed at our branches and I’d like to see the person who didn’t welcome them put under Article 3 [complaints].”

Poppy and Remembrance Committee Chair Berkley Lawrence reported the poppy campaign was going well. The command held a Fly the Flag ceremony at the Confederation Building in St. John’s on the last Friday in October. Berkley, President Petten and First Vice Frank Sullivan were joined by Premier Paul Davis while the flag was raised by sea and air cadets and the Singing Legionnaires performed.

Much discussion was generated around the annual pilgrimage to Beaumont-Hamel and other sites where the Royal Newfoundland Regiment fought during the First World War. Delegates wanted to know why veterans were invited on the pilgrimage but not associate members. Lawrence explained that the pilgrimage was funded by the provincial government and it was its policy to invite only veterans along with youth delegates and other officials.

Lawrence, the command’s second vice, is chair of the Local Arrangements Committee for the 2016 dominion convention to be held in St. John’s. The convention will be held in the newly renovated and enlarged convention centre. Plans are being made for a Newfoundland Night at the convention, but it is not decided whether this would be one large event or split up among the branches in the area.

He showed delegates the logo for the convention with the theme, “Looking back to see ahead.”

The Legion’s work with the Royal Commonwealth Ex-Services League helping needy veterans in the Caribbean was explained by Moore and delegates raised $30,598.

Dominion First Vice Dave Flannigan, a former command president, made a plea to raise money to support the command’s participation in the Legion’s national track and field program. Delegates dug into their pockets and came up with $11,731.

Treasurer Ian Walsh reported that the command was in a good financial position. Although he didn’t ask for an increase in membership dues, he warned delegates that they should be prepared for one at the 2017 convention.

The only contest was for the position of second vice. Four delegates were nominated, Ed Fewer and Sy Thompson, both of Grand Falls Branch in Grand Falls/Windsor, Dave Johnston of Stephenville Branch, and Ron Earl of Labrador City Branch. After three ballots, Johnston was declared the winner. 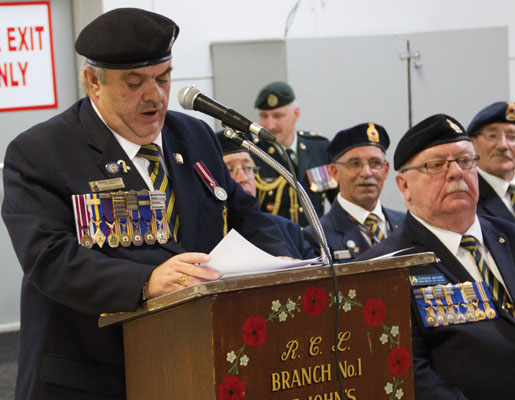 Honorary Treasurer Ian Walsh of Dr. William Collingwood Memorial Branch in Placentia and Chair Joe Kennedy of Grand Falls Branch were both acclaimed for another term.

At the banquet, guest speaker Gary Browne, an author and former member of the Royal Newfoundland Constabulary, made a passionate speech to have Lieutenant-Colonel Father Tom Nangle declared a person of historical significance.

Nangle was a Roman Catholic priest born in St. John’s who served as chaplain to the Newfoundland Regiment during the First World War. He was highly regarded for consoling and motivating the troops and comforting the families in the regiment. He, too, was wounded in 1917.

After the war, he was appointed by Newfoundland Prime Minister Sir Richard Squires to be Newfoundland’s representative on the Imperial War Graves Commission. He served as director of war graves, where he supervised the exhumation of known graves, the construction of Newfoundland’s 15 war cemeteries in Europe and Gallipoli and the five caribou memorials in France and Belgium. He also supervised the construction of the National War Memorial on Water Street in St. John’s, which was unveiled by Field Marshal Douglas Haig in 1924.

He later lived in Rhodesia, now known as Zimbabwe, where he died in 1972. “We hope in the period of 100th anniversaries, there will be some announcement on Tom Nangle’s importance in coming months,” said Browne.

was with Legion Magazine since 1989 and served as staff writer, assistant editor and news editor. Before joining the magazine, he worked for The Huntsville Forester, The Edmonton Sun and Maclean’s. He is also the author of plays, four books of poetry and “Canada and the Victoria Cross” in the Canada’s Ultimate Story series.
All Posts
PrevPrevious ArticleHumour Hunt
Next ArticleOmbudsman condemns handling of cadets after 1974 grenade accidentNext