From Dieppe to D-Day 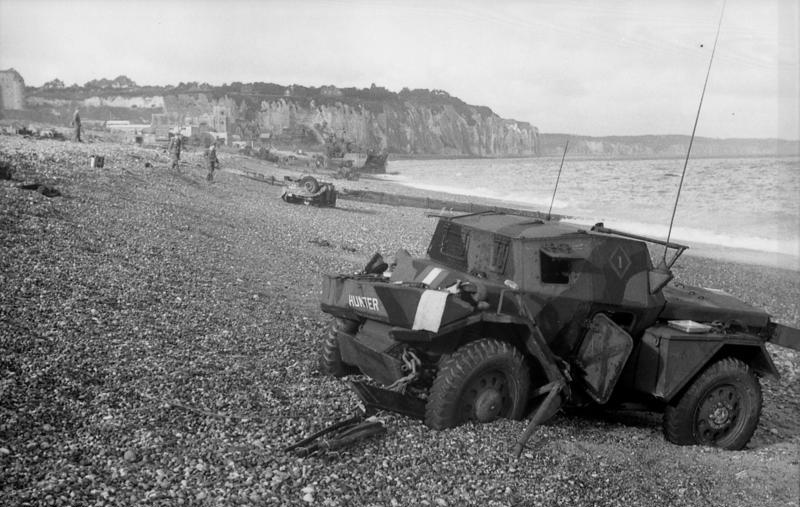 In his orders of the day on June 6, 1944, Lieutenant-General Henry D.G. (Harry) Crerar told some 14,500 Canadian soldiers destined for the beaches and drop zones of Normandy that their impending success was thanks largely to the disaster at Dieppe.

Almost two years earlier, 5,000 Canadians, 1,000 British and 50 U.S. Army Rangers launched an ill-planned and poorly supported raid on the French seaside town northeast of the D-Day beaches. They were under orders to seize and briefly occupy the port, to prove it was possible and to gather intelligence.

Withdrawing troops were to destroy coastal defences, port facilities and strategic buildings on the way out. But for more than half the troops involved, there was no way out. The operation ended in abject defeat: 3,367 soldiers were either killed, wounded or captured, most of them Canadians.

“Plans, preparations, methods and techniques which will be employed are based on knowledge and experience, bought and paid for by the 2nd Canadian Division at Dieppe,” the Hamilton-born Crerar told the Normandy invaders 22 months later.

“The contribution of that hazardous operation cannot be overestimated. It will prove to have been an essential prelude to our forthcoming and final success.”

Historian Jack Granatstein called the August 1942 raid at Dieppe “an object lesson on how not to mount an amphibious assault.” A doubtful British General Bernard Montgomery had suggested abandoning the operation altogether.

Historians do, however, tend to agree that the debacle contributed to the D-Day success, though the degree to which it did is a matter of debate and the question of whether it was worth the cost remains still very much in the air.

In 1943, The Globe and Mail broke ranks in calling the raid “a fiasco of the first order; a tragedy of military blundering without parallel in this war.” Granatstein agreed. “The blunders at Dieppe were and remain inexcusable,” he wrote in 2014.

“Too big for a raid, too small for an invasion…what were you trying to do?” one German interrogator asked his Canadian PoW. 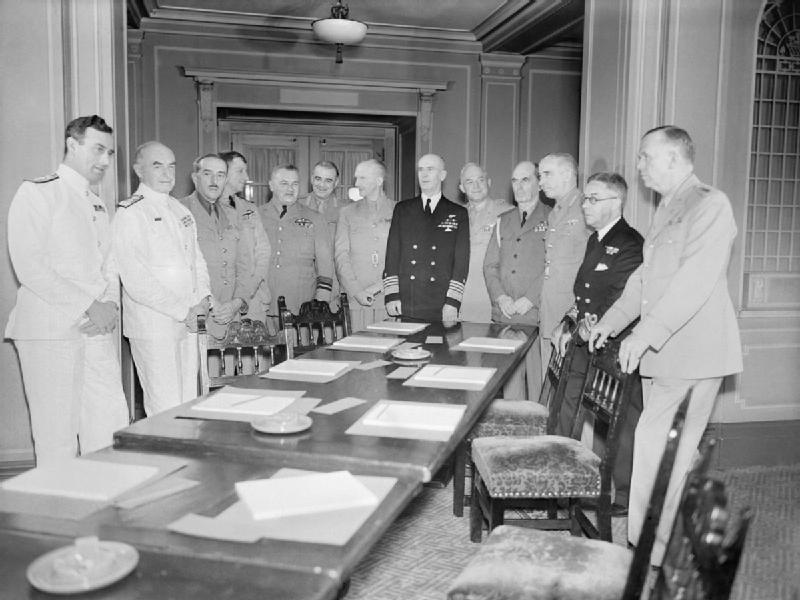 Granatstein said some have considered Mountbatten “utterly unqualified for his role, a man protected by his royal connections and public relations minions.”

Dieppe did focus the brass hats on the need for better planning and a clear chain of command, which came to pass in spades leading up to the D-Day invasion, dubbed Operation Overlord.

“There was heavy bombing,” Granatstein wrote, “though it was not hugely successful in destroying beach defences. There was massive naval gun support, which was successful.

“There were better landing craft and specialized armoured vehicles, and the assault troops were far better trained. All of those things would likely have happened even without the Dieppe raid.”

The beaches at Dieppe were narrow, stony and flanked by high cliffs.

“Having served as a Commando soldier, my main impression after studying the landing beaches…was one of amazement that anyone with the slightest knowledge of amphibious warfare could contemplate such a place,” the late military historian Robin Neillands wrote in his 2005 book, The Dieppe Raid.

Instead of landing at a fortified port like Dieppe, D-Day invaders crossed open beaches. The Allies even brought along their own pre-fabricated ports, the Mulberry harbours.

Carleton University historian John Maker has said one would be better advised to look at the 1943 invasion of Sicily and operations in North Africa in 1942 for lessons that informed the D-Day operation.

In Sicily, he said, the Allies gained valuable experience in joint planning and amphibious assault.

“Canadian commanders gained much experience on the ground in Sicily and mainland Italy that they brought back to Northwest Europe for the Normandy campaign,” Maker said in a 2014 interview.

“So, I think those are better exemplars than Dieppe.”

Still, Dieppe reinforced the notion that surprise was key, he added.

“In Dieppe, surprise was lost in the early hours of the raid, so the Germans were pretty sure that an invasion was coming, which obviously didn’t bode well for the attackers,” said Maker.

“But in Overlord you see some really, really complex operations going on to try and deceive the enemy and maintain that element of surprise.”

Indeed, D-Day planners ordered a massive diversion campaign on the Kent coast, called Operation Fortitude, which included fake army camps, dummy airfields and inflatable tanks and equipment, all designed to convince the Germans that an invasion force would land somewhere other than Normandy.

Among the unanticipated problems at Dieppe were the softball-sized stones on the beaches, which got caught up in tank tracks, slowing them to a lethally vulnerable pace and disabling some. Tanks that made it past the beach and onto the promenade at the edge of the town were stymied by man-made barriers.

D-Day planners subsequently seized on the need for specialized armour to help overcome obstacles Allied forces would face in the Normandy campaign, both natural and otherwise.

British Major-General Percy Hobart was chosen to come up with adaptations to the Allies’ existing fleet of tanks. His creations were dubbed “Hobart’s Funnies.”

Hobart had engineered Britain’s transition from mounted cavalry to armoured tanks after the First World War. Later, he raised and trained the 7th Armoured Division in North Africa—best known as Montgomery’s Desert Rats.

Ingenious as he was, the acerbic Hobart was a polarizing figure in the ultra-conservative world of the British Army, whose envious and scornful hierarchy seized on his role in the divorce of a fellow officer whose ex-wife he had married.

He was forced into retirement in 1939, incredibly winding up a lance-corporal in the Home Guard.

Once Winston Churchill got wind of it, however, Hobart was reinstated. Assigned to the 79th (Experimental) Armoured Division, he was ordered to devise and develop specialized armour for the Normandy beaches and beyond.

His inventions included amphibious Sherman tanks and Shermans with spinning flails to clear minefields, Churchills with flamethrowers and mortars, and a tank with a powerful searchlight partly designed to blind enemy gunners after dark.

Notably, he produced the bobbin—a three-metre-wide reel of canvas cloth reinforced with steel poles. It was positioned up front of a tank and unrolled onto the ground to form a path so that vehicles, including the tank itself, could traverse sand or soft earth without sinking or getting stuck.

Hobart’s bridging tanks were among his most effective, including modified Churchills called Armoured Vehicles Royal Engineer, or AVREs. The AVREs had several designs for a multitude of roles, including bridging.

“Hobart’s Funnies ultimately proved their worth in the Normandy invasion and helped the Allied forces grab a foothold on the continent that they never relinquished,” wrote historian Jon Diamond. 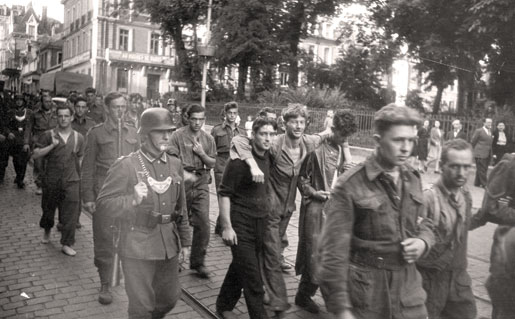 Captured Canadians are marched through Dieppe.
PHOTO: CANADIAN WAR MUSEUM/19900076
The Canadians’ sacrifice at Dieppe earned them the right to do it again, only now they would traverse open beaches at Courseulles and Bernières, suffer D-Day’s second highest casualty rate, yet penetrate farther into France on Day 1 than any of the Allied invaders. Some say revenge for Dieppe motivated their success.

But it was Mountbatten himself who provided the most famous post-facto justification for Operation Jubilee when, echoing Wellington’s words about Waterloo, he stated that the battle of D-Day was won on the beaches of Dieppe.

Prior to the 70th anniversary of the Dieppe raid, James Dunning, a former sergeant-major in No. 4 Commando of the Royal Marines, heartily disagreed. Dunning was involved in the only part of Operation Jubilee to attain in its objectives—a flanking attack to take out a German coastal battery at Varengeville-sur-Mer.

“A load of balls that was,” he said of Dieppe, calling it a costly lesson and crass stupidity to think that an enemy-held port could be taken by frontal assault. “I think it was one of the biggest cock-ups of the Second World War and it never should have happened.”

This is the last of three special columns on the D-Day invasion.

PrevPrevious ArticleJames Strachan: Old enough to die; too young to drink
Next ArticleGeorge Alfred Newburn: A soldier of the First World WarNext