Home » Military History » Army » In The Footsteps Of War

In The Footsteps Of War

The beach at Pourville, France, where Canadians came ashore as part of the August 1942 Dieppe Raid.
PHOTO: SHARON ADAMS

As the battle of Normandy ended in the last days of August 1944, the soldiers focused their energies on the pursuit of the German army and the liberation of northern France.

It was left to the war correspondents to make sense of the confused, bloody campaign that had ended so quickly after weeks of apparent stalemate. Newspapers carried stories, the first draft of history that was to constitute the beginning of our collective memory of what had happened and why it happened.

For Canadians, who were largely ignored in the world press, war correspondents Ross Munro, Greg Clark, Ralph Allen, Charles Lynch, and CBC radio reporters, especially Matthew Halton, provided an overview that stressed the achievements of the Canadians. Ross Munro, the Canadian Press correspondent who had been with the troops at Dieppe, Sicily and Normandy, published a book-length survey titled Gauntlet to Overlord which won the Governor General’s Award for non-fiction in 1945.

Munro had spent enough time close to the sharp end to realize that the ambitious plans outlined by generals and staff officers in press briefings seldom survived contact with the enemy and it would not have occurred to him to criticize the soldiers for failing to reach objectives outlined on a map. Munro and his colleagues believed the Canadians faced the toughest enemy troops in Normandy and had beaten them in battle. They told a story of heroic achievements which fascinated Canadians. 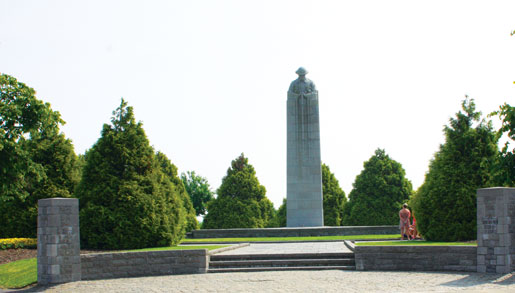 Sixty years later, when Saving Private Ryan was filling theatres across Canada, another journalist commented that if the film had been made in this country, “the Allies would never have got off the beach. Private Ryan himself would have been flattened by a German Tiger tank and the rescue squad dead to the last man.” This approach had been dominant in Canadian universities and military colleges since 1960, the year C.P. Stacey published The Victory Campaign, the official history of the Canadian Army in Northwest Europe. Stacey’s book was strongly influenced by British military writers, especially Liddell Hart and Chester Wilmott, who had established an interpretive framework contrasting the “superior generalship” of Lieutenant-General Bernard Montgomery with the constant interference from Hitler that paralyzed the German command. They drew an equally sharp contrast between the Allied soldiers—American, British and Canadian—and their German counterparts, arguing that the performance of the latter was greatly superior. The old cliché, “lions led by donkeys” might, Liddell Hart argued, need to be reversed when the “poor performance” of the Allied troops in Normandy was considered.

Stacey concurred with these views, attributing the Allies’ success to “numerical and material superiority,” the paralyzing effects of Allied air power, and superior generalship—especially that of Montgomery, whose “grip of the operations was firm and effective.” Overall victory was won despite failure on the battlefield. The theme of failure on the battlefield dominated historical writing about the war until the 1990s when American, British, and Canadian historians began to raise new questions. 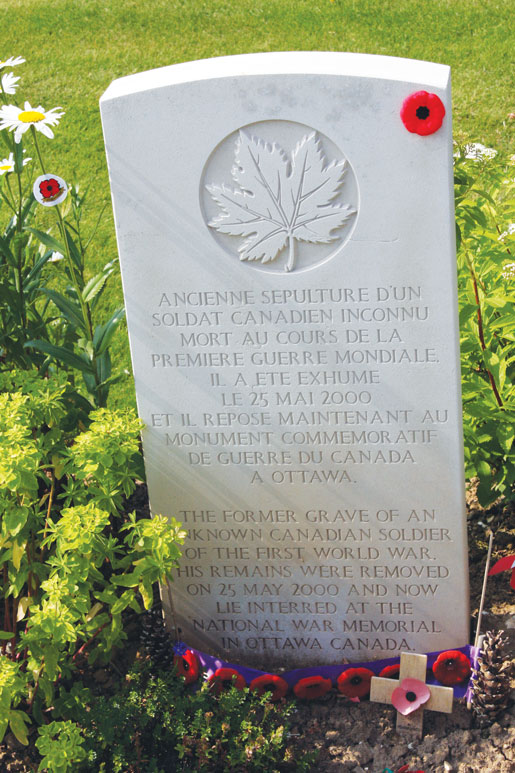 A marker identifies the former grave of the Unknown Soldier who now rests in a tomb in front of the National War Memorial in Ottawa.
PHOTO: SHARON ADAMS

This series of Legion Magazine articles on Normandy, which began in the September/October 2010 issue, presented this new approach to the campaign, emphasizing the challenges the Canadians and other Allied troops had to overcome in close combat. The essays have stressed the limitations of Allied weaponry—especially tanks—and demonstrated that while the Allied air forces maintained complete air superiority, they were unable to play a decisive role in the land battle.

The destruction of two powerful German armies in just 76 days was one of the greatest military victories in modern history and the Canadians played a role in the victory that was out of proportion to their relative strength among the Allied armies.

As we approach the 70th anniversary of D-Day and the battles of 1944, more and more Canadians are travelling to Europe to explore the sites of war and memory hoping to gain a better understanding of the achievements and sacrifices of their countrymen. I have been bringing groups of Canadians to these battlefields and memorials for close to 20 years and have co-authored battlefield guidebooks on the Canadian role in both world wars. Today, I thought it would be useful—and timely—to begin a new series of articles that will offer suggestions on how to get the most out of a visit to Normandy and the First World War sites in northern France.

Most visitors will want to combine visits to the most important First World War sites with a trip to Normandy, especially in the years 2014-18, the 100th anniversaries of key events in the Great War. Assuming you will have 10 days to two weeks available, the following itinerary is suggested:

Fly to Paris, Charles de Gaulle Airport and plan an easy jet-lag day. The groups I travel with book an airport hotel for the first night, then spend part of the first day in Paris before gathering for dinner at the hotel. In 2014 you may want to use the first day to visit Meaux, the town on the Marne that provides a focal point for those interested in the decisive battle of 1914–The Miracle of the Marne. There is an excellent museum, Musee de la Grande Guerre, that offers an overview of the war and specific exhibits on the two great battles fought on the Marne in 1914 and 1918. Described as “a total immersion in history,” the museum is close to a memorial at Villeroy which offers the best view of the battle terrain. There are hotels in the area which is close to Euro Disney, but Meaux is also a short drive from the airport.

Rental cars equipped with GPS can help solve navigation problems while conventional maps help provide an overview of where you are going. Charles de Gaulle Airport can be confusing, but if you follow the signs for “Autres Directions” you will find the exits for the airport hotels at Roissy and the A1 highway without difficulty. 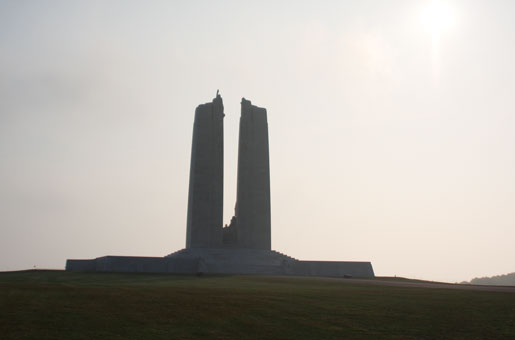 The Canadian National Vimy Memorial. Unveiled in 1936, the memorial is inscribed with the names of 11,285 Canadian soldiers who were posted as “missing, presumed dead” in France.
PHOTO: SHARON ADAMS

To head north to Meaux, the Canadian battlefields of the Great War, or Dieppe as a starting point for a Normandy tour, take the A1 north “Direction Lille.” The A1 is a modern toll road with service centres (Aire de Service) along the way. We suggest driving to Ypres, sign posted Ieper in Flemish, as your first stop. You may wish to take a break at Péronne where a second interesting war museum is located. L’Historial tells the story of the war but the emphasis is on artistic and cultural artifacts. The trench drawings of Otto Dix are just one of the outstanding exhibits. Ypres is roughly 90 minutes from Péronne.

The 1st Canadian Division was sent to the Ypres Salient in late March of 1915 and tasked to take over positions on the eastern face of the salient. You will want to visit Vancouver Corner at St. Julien to see Canada’s famous Brooding Soldier memorial. The In Flanders Fields Museum in the restored Cloth Hall in Ypres and the Last Post ceremony at the Menin Gate are must-sees.

If you have time, the German cemetery at Langemarck presents a stark contrast to the Commonwealth cemeteries. To the west of Ypres, John McCrae’s Essex Farm Dressing Station is worth a visit. To begin to get a sense of the 1917 battle of Passchendaele, the Tyne Cot Commonwealth Cemetery and Memorial museum in Zonnebeke are recommended.

The next day, Vimy is just over an hour away. The Vimy tunnels, interpretation centre and the memorial itself will absorb the rest of your day so it is best to have a reservation at one of the hotels in Arras. I suggest you begin your visit to Vimy at Notre Dame de Lorette, the French military cemetery north of Souchez off the D937. From the viewing platform you can see the entire Canadian Corps battlefield and the ridge. On a clear day the Canadian National Vimy Memorial gleams in the distance. 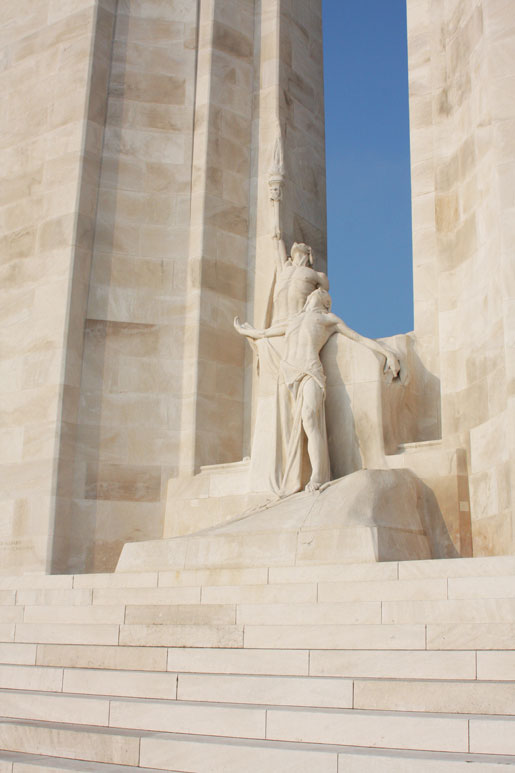 The Canadian National Vimy Memorial sculptures. Unveiled in 1936, the memorial is inscribed with the names of 11,285 Canadian soldiers who were posted as “missing, presumed dead” in France.
PHOTO: SHARON ADAMS

On day four, Beaumont Hamel, Courcelette and the Amiens battlefield in the Somme can be visited before driving to Dieppe where you can begin experiencing the Second World War battlefields. Consider driving to Dieppe using the D920 which brings you to the north side of the city with easy access to Puys, or Blue Beach where the Royal Regiment of Canada landed on Aug. 19, 1942. This small village with high cliffs and narrow beach exit was the scene of the most costly part of the raid and has to be seen to understand the challenges confronting the Canadians on that fateful day. You may wish to watch a “decision-making exercise” on Dieppe available at canadianmilitaryhistory.ca before your visit. 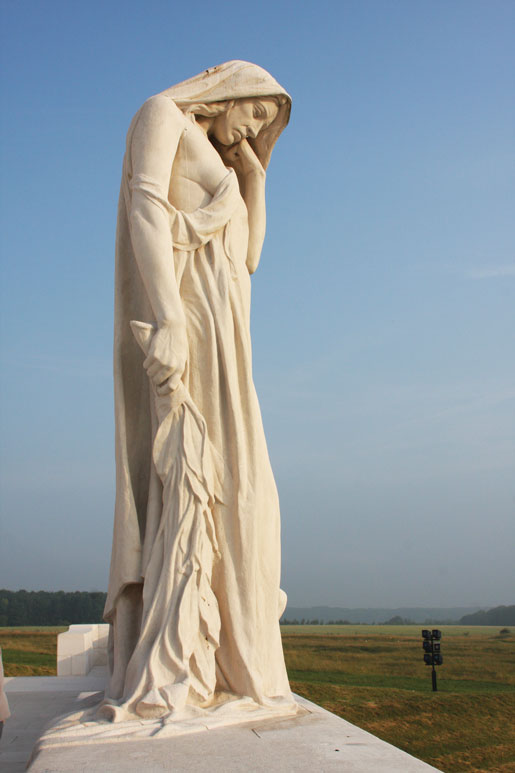 The Canadian National Vimy Memorial sculpture. Unveiled in 1936, the memorial is inscribed with the names of 11,285 Canadian soldiers who were posted as “missing, presumed dead” in France.
PHOTO: SHARON ADAMS

Driving from Puys to the beachfront hotels in Dieppe is easy and you avoid the heaviest traffic. The one-way signs direct you in a loop around the harbour to the beach area. There are good restaurants in all price ranges at Dieppe. The next morning the best way to see the ground is to walk out to the end of the pier where you can look back into Puys, survey the main beach, and see Green Beach at Pourville to the west. There are a number of memorials and plaques at the main beach on the esplanade. Among them is the recent Essex & Kent Scottish memorial designed so that the morning sun on Aug. 19 shines through a hole and illuminates an engraved maple leaf. A visit to Pourville and the Dieppe cemetery is also a must.

Look for ideas about touring the Battle of Normandy sites in the January/February 2014 issue. The guidebooks available directly from canadianmilitaryhistory.ca are another good source. All proceeds from sales are used to support student and high school teacher study tours in Europe.