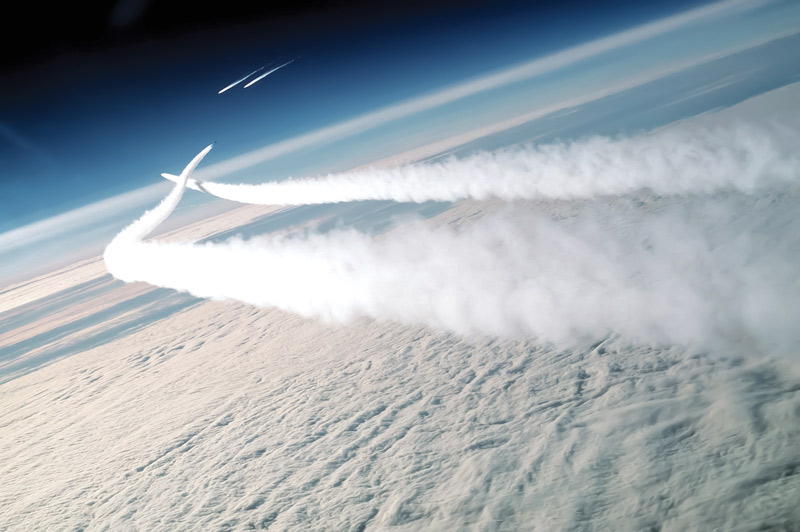 Two Soviet MiG-29 aircraft, on their way to participate in an air show in British Columbia, are intercepted by American F-15 Eagles over the Arctic on Aug. 1, 1989.
Wikimedia

This year marks the 20th anniversary of the terrorist attacks on the World Trade Center in New York and the Pentagon in Washington, D.C., on Sept. 11, 2001. The day will no doubt be marked by sombre reflection on what happened and grief for the victims.

But will anyone think of that day as marking the greatest failure of the North American Aerospace Defence Command?

Norad is responsible for protecting North American airspace against attack, but it responded only after the fact by closing U.S. airspace and ordering all operating aircraft to land at the nearest airport. Even today, Norad has no recourse against another 9/11-type attack except to shoot down a hijacked airliner.

There is a lot of discussion in the United States and Canada these days about Norad modernization. The radar and computer systems that form the heart of Norad have been updated several times, but new threats—hypersonic cruise missiles and cyberattacks on vital companies or government institutions—give rise to the need to revitalize North American defences.

In recent defence conferences, Canadian and American defence experts have revealed, for example, that the civilian air traffic control network and Norad computer systems cannot readily talk to each other. And the warning time for hypersonic cruise missiles fired at North America is now down to five to 10 minutes. So, what can be done to strengthen the air and maritime defences of North America?

Any attack on North America will be met with massive retaliation.

Anything that improves computer and communication systems inside Norad and between Norad and the air traffic control network should be done. Artificial intelligence systems are needed to detect attacks and determine where they are coming from and who launched them. Why? To enhance deterrence, which is still the best protection for North America by far.

Take, for example, current anti-ballistic missile systems that have been installed by the U.S. on the Pacific coast and at sea. The success rate in tests is still no more than 50 per cent. They may offer a modicum of protection against a small salvo, but that is it.

The real protection against an intercontinental ballistic missile or a hypersonic cruise missile is the certainty that any attack on North America will be met with massive retaliation from land, sea and air-based missiles.

It is possible that in the not-too-distant future China will begin regular patrols with missile-carrying submarines in the Arctic Ocean. Such a submarine just outside Alaskan or Canadian territorial limits could put missiles down on virtually any target as far as the U.S. Midwest in minutes.

How can Norad protect the U.S. or Canada against such a threat? And how long will it be before North Korea acquires or builds a submarine with nuclear missile capability?

Missiles—ballistic or hypersonic—have been a weak point in Norad defences since the 1960s. And the rationale remains the same: certainty that any country launching an attack against North America would be well and truly devastated in a massive counterattack.

The evolution of hypersonic weapons does not change the basic equation of deterrence. Nor do cyberattacks, unless an enemy is capable of developing an attack system so sophisticated that North American air and maritime defence networks all crash at the same time. But Norad must develop backup systems that go online instantly in case of a computer attack, at least to tell us where to aim the massive counter blow that would, in the words of Curtis LeMay, former chief of staff of the U.S. Air Force, blast the attacker back “to the Stone Age.”

Norad is important. It allowed the U.S. and Canada to build the systems that put mutually assured destruction on the table during the Cold War with the Soviet Union. But Norad will not hermetically seal North America off from harm, no matter how sophisticated it gets. So let’s put some of our faith in Norad, but let’s also make sure we keep our powder dry.

PrevPrevious ArticleAfghanistan goes to the Taliban
Next ArticleEarly days: Canadian troops in Afghanistan 2002-2004Next