War Of 1812 Trek Celebrated In Dozens Of Communities

Cars honked, dogs barked and people waved as soldiers from local militia units in Ontario and Quebec carried a replica of a 200-year-old flag along the roadside. It was all part of a commemoration of the gruelling 1,100-kilometre trek from Fredericton to Kingston, Ont., undertaken by the 104th Regiment of Foot in the midst of winter 200 years ago during the War of 1812.

Cars honked, dogs barked and people waved as soldiers from local militia units in Ontario and Quebec carried a replica of a 200-year-old flag along the roadside.

It was all part of a commemoration of the gruelling 1,100-kilometre trek from Fredericton to Kingston, Ont., undertaken by the 104th Regiment of Foot in the midst of winter 200 years ago during the War of 1812. 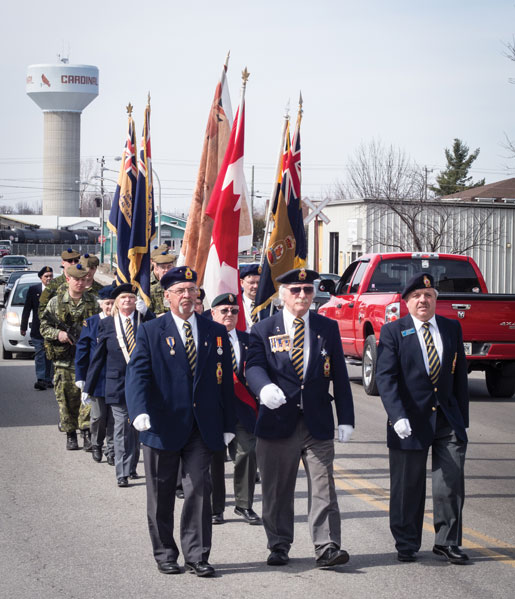 “Fall behind and you’re rations,” warned Lieutenant-Colonel Shawn Herron of the Brockville Rifles to the media representative who wanted to march with the soldiers. Once out on the road the soldiers were cheered and applauded.

In Ontario, they were welcomed into Legion branches who offered them either a light lunch or hearty end-of-the-day meal depending on what time of day they passed the branch. “We were contacted about a month [before]. We were asked to provide a light lunch since I am told it is not a good idea to march on a full stomach,” said Fort Wellington Branch President Frank Murphy.

The 104th Regt. of Foot, a British regular force unit raised in New Brunswick, set off initially for Quebec City on Feb. 16, 1813. With only mail routes to follow, the troops often donned snowshoes and walked up the frozen St. John River. When they reached Quebec City they were given a two-week break and then told they were needed in Kingston, where the British Navy was establishing a base in an attempt to gain control of the Great Lakes.

The idea of recreating the journey began with the St. John River Society in New Brunswick which received a grant from the Department of Canadian Heritage to organize events in various communities to commemorate the march. “We had a series of celebrations on successive weekends all timed to be held in the actual communities where the regiment passed,” explained Molly Demma, the society’s executive director. 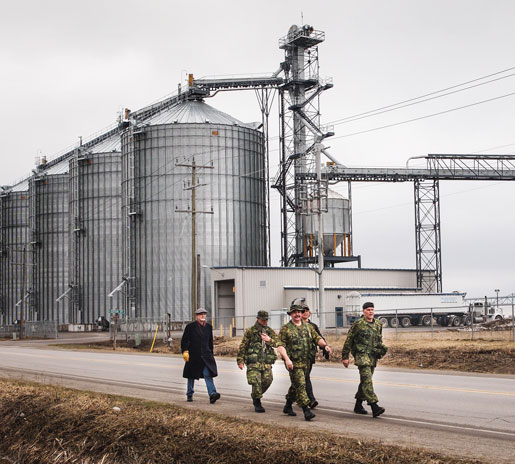 Having gained support from the 2nd Battalion, Royal Canadian Regiment from Canadian Forces Base Gagetown and the Royal New Brunswick Regiment, the regiment which perpetuates the battle honours of the 104th, the commemoration kicked off Feb. 16, 2013. “We started from the Officers’ Square in Fredericton in the exact place from which the original group started on the exact date 200 years earlier,” said Demma.

In each community, participants were encouraged to walk five kilometres to the ceremony, often on snowshoes. Local militia and cadet groups set up current-day snow shelters. “We encouraged the cadets to stay in overnight to get a feel of the hardships that the soldiers faced,” said Demma.

Unlike in Ontario and Quebec where the colours were carried the actual distance, no one was carrying the flag the whole way in New Brunswick. “Each province did it its own way,” said Demma.

To make sure the whole distance was walked, Brian Macdonald, a member of the New Brunswick Legislative Assembly and former Canadian Forces troop commander in Bosnia, personally walked the distance within the province between the weekend celebrations in New Brunswick, using much of the TransCanada Trail.

The original colours of the 104th Regt. were discovered in an attic in Britain in the 1940s and later restored and donated to the New Brunswick Museum. For these celebrations, Demma said a high-resolution photograph was taken of the flag and printed on nylon to create a replica to be carried during the recreation. 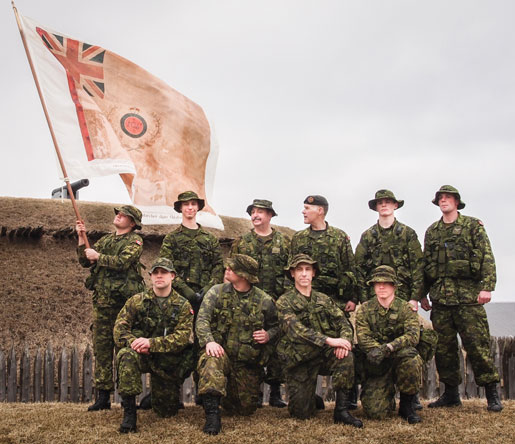 In Quebec the commemoration was organized by Les Voltigeurs de Quebec Museum. “At first we were going to do the whole thing but then we thought, ‘Let’s share this project,’” said the museum’s Mike Reshitnyk. So the museum contacted various military units to carry the replica flag across the province.

A ceremony was held March 10 at the Fort Ingall Historic Site in Cabano, Que., to hand the flag over to the Sherbrooke Fusiliers. The Voltigeurs and the Royal 22nd Regt. took over the ceremony as it approached Quebec City. “We took the flag on the ferry from Levis to Quebec City. The original regiment crossed there over an ice bridge,” said Reshitnyk.

A special ceremony attended by Veterans Affairs Minister Steven Blaney was held on the Plains of Abraham in Quebec City.

In Montreal, the colours were accepted by the Black Watch (Royal Highland Regiment) of Canada and the Fusiliers Mont-Royal. “We got the colours in the St. Patrick’s Day parade where there were thousands and thousands of people watching. It was good exposure for the military,” said Reshitnyk.

The Stormont, Dundas and Glengarry Highlanders, based in Cornwall, took over carrying the colours in Ontario after a handover ceremony at Bainsville, Ont., on the Ontario-Quebec border on April 6.

Events in Ontario were organized by the St. Lawrence War of 1812 Bicentennial Alliance. Local militia were asked to carry the flag from the Quebec border to the final destination at Royal Military College (RMC) in Kingston. Alliance member Michael Berk walked the entire Ontario portion of the journey. 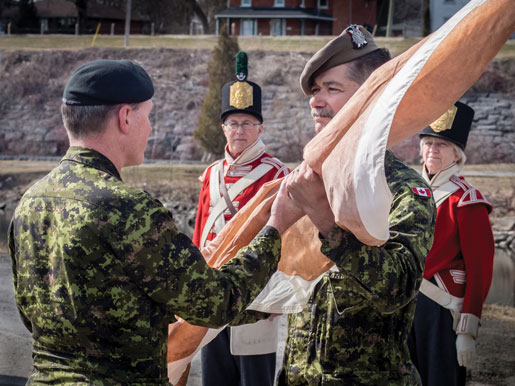 The SD&G Highlanders presented the colours to the Brockville Rifles.
PHOTO: DAN WARD

The Glens carried the flag over three days between Bainsville and Cardinal with stops at Claude Nunney VC Memorial Branch in Lancaster, John McMartin Memorial Branch in Cornwall, Long Sault Branch, Morrisburg Branch and Iroquois Branch. At Cardinal Branch, which is right on the St. Lawrence River, there was a ceremony at the end of the day when the colours were turned over to the Brockville Rifles.

The Brockville Rifles took the flag from Cardinal to Fort Wellington Branch in Prescott and on to a ceremony at the Brockville Armoury attended by members of Brockville Branch. The next day the flag was carried to Col. R.H. Britton Branch in Gananoque where it was received by the Princess of Wales’ Own Regiment.

While the marchers had enjoyed nice spring weather during most of the Ontario portion of the trip, winter bit back on the final day. The PWORs walked through snow and high winds to deliver the flag at RMC.

“Because of the weather the reception was held indoors. We had the regiments that had carried the flag [in Ontario] there and the Stormont, Dundas and Glengarry Highlander Pipe Band. The cadets from RMC were all in uniform on the upper level. It was a very colourful event,” said Alicia Wanless of the Alliance.

“The journey ended April 12, 2013 in the exact spot and on the exact day as the original journey 200 years ago,” said Demma who, along with Macdonald, was in Kingston for the final ceremony.

was with Legion Magazine since 1989 and served as staff writer, assistant editor and news editor. Before joining the magazine, he worked for The Huntsville Forester, The Edmonton Sun and Maclean’s. He is also the author of plays, four books of poetry and “Canada and the Victoria Cross” in the Canada’s Ultimate Story series.
All Posts
PrevPrevious ArticleHousekeeping Changes Raise Concerns For Legion
Next ArticleManitoba Player Defends His Cribbage TitleNext