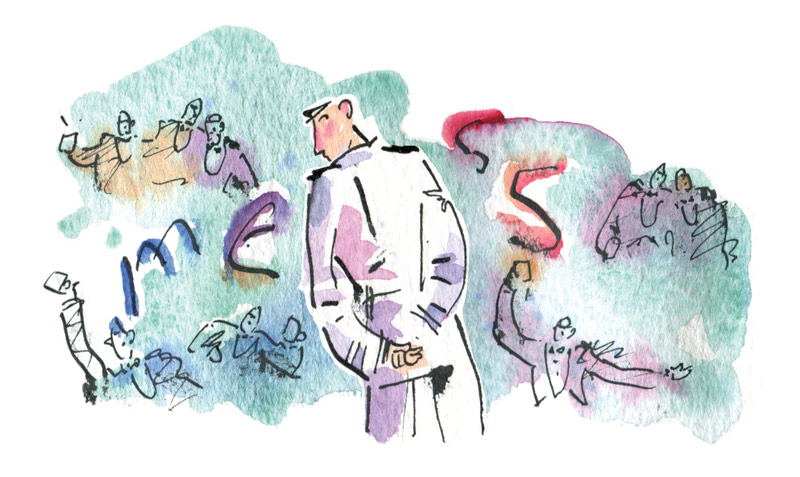 Peter Magwood of Dartmouth, N.S., recalls when he was a petty officer aboard HMCS Annapolis on a port visit to Rosyth, Scotland, during a NATO deployment in 1974. The coxswain, Chief Petty Officer Guy Joudry, noticed that the frigate HMS Jupiter was moored across the jetty. Prince Charles was serving as Jupiter’s communications officer.

Joudry, Magwood and some other petty officers were chatting when Joudry had a brainstorm: invite the prince aboard for a drink.

A suitable letter of invitation was drafted and Magwood was delegated to call on Jupiter and deliver the invite.

He tells what followed:

“When I arrived at the brow of the frigate, I was asked by the quartermaster what my business was. I gave the reason and soon heard the pipe: ‘Inspector MacKay is requested to the quarterdeck.’”

The inspector—the prince’s bodyguard—arrived and invited Magwood below for a pint. Magwood explained his errand and the policeman disappeared briefly.

“Moments later, Inspector Mackay returned, not smiling, and we both went to the wardroom flats where I was told ‘stand there and come to attention when he comes out.’ I heard some chat in the wardroom, a princely chuckle and soon out came Prince Charles, a tanned, handsome young man, looking every bit like his pictures, with Inspector Mackay in tow.”

Magwood introduced himself and handed over the invitation.

“I’m sorry, I can’t today,” said the prince. “Would Wednesday be all right?” Magwood said that would be fine.

“On the appointed day, Charles and his bodyguard appeared at the brow of Annapolis and were escorted by the [coxswain] to Three Mess where he spent a memorable two and a half hours, enjoyed…by the 50 chiefs and petty officers and Charles who exchanged stories about their families and respective navies with laughter, candour and abandon.”

The event was not without repercussions, Magwood says.

“Years later, I learned from an officer serving in Annapolis that the captain excoriated members of the wardroom and the entertainment officer for not inviting the Prince of Wales over first. ‘He went into Three Mess!’ the captain was said to have exclaimed, as though Charles had entered a den of iniquity.

“Prince Charles, the model of decorum…went where he was invited: to the chiefs’ and petty officers’ lounge.”

A fellow I worked with many years ago served in the Royal Canadian Air Force during the Second World War and was stationed in England in 1944, when the German V-1 buzz bombs appeared. He recalled an incident with one of them.

He and his mates were sitting around one evening when a calm announcement came from the control tower over the airfield public address system.

“We have been advised that a V-1 is approaching the field. You will be told in plenty of time in case it is necessary to seek shelter.”

At that moment, the flaming exhaust of a V-1 roared out of the gathering darkness over the trees at the end of the field.

“And here comes the son-of-a-bitch now,” the announcer screamed. The speaker forgot to turn off the mic and the listeners were treated to the crash of tables and chairs toppling in the tower and the pounding of heavy boots descending the stairs.

The bomb hit the ground and blew up an empty shack, with no casualties.

A lot of ordinary words and phrases originated with the military.

For example, a loose cannon today is a troublemaker who won’t follow the rules. In the days of sail-powered warships, it really was a literal loose cannon: a two- or three-tonne piece of naval ordnance that broke its lashings in a storm or heavy sea and was rolling back and forth on the gun deck like some mad juggernaut.

A blockbuster, which is now usually a hugely popular movie, was once a three- or four-tonne aerial bomb big enough to take out a city block.

A flash in the pan now refers to a brief fad or short-lived popularity, but it used to mean a misfire in a flintlock musket in which the gunpowder in the priming pan failed to ignite the main charge in the weapon. There was a flash of flame in the pan, but no bang from the barrel.

“Never forget, your weapon was made by the lowest bidder.”

“When a fight is going incredibly well, you’ve forgotten something.”

“If at first you don’t succeed, call in an air strike.”