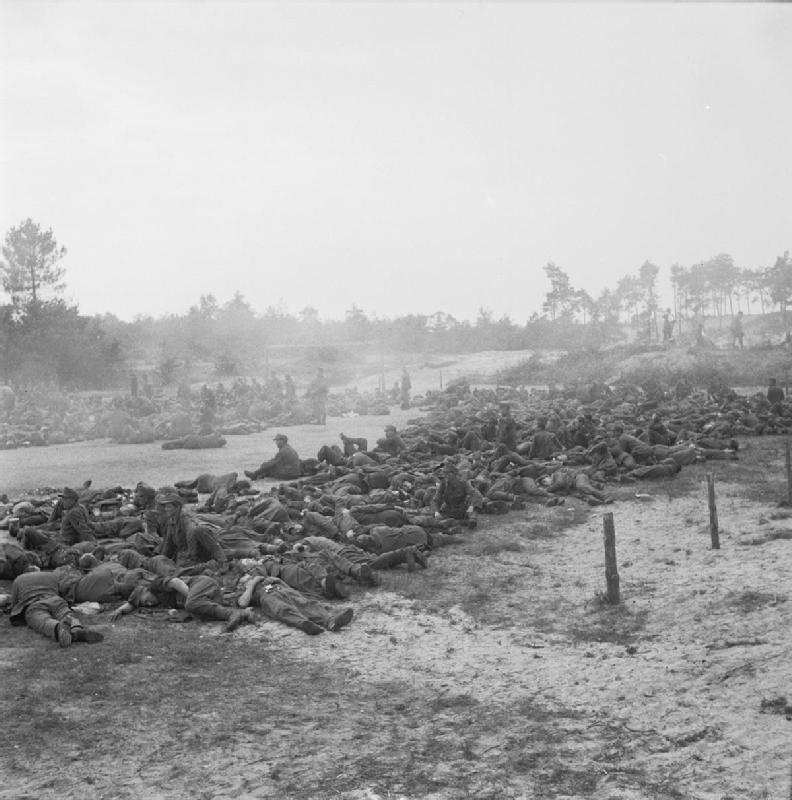 Operation ‘market Garden’ (the Battle For Arnhem)- 17 – 25 September 1944 Nijmegen and Grave 17 – 20 September 1944: A large group of German soldiers who have been taken prisoner in Nijmegen and the surrounding area by American paratroopers of the 82nd (US) Airborne Division.
IWM
Operation Market Garden was a plan to create a route for an Allied invasion of northern Germany by capturing key bridges over the Rhine and its tributaries in September 1944.

The bridge at Arnhem, Netherlands, on the lower Rhine, was key to the plan. At this crossing, the Allies planned to push south into the Ruhr valley, Germany’s industrial heartland, choking off production of materiel and ending the war before 1945.

The Allies were unable to get reinforcements and supplies to forward troops, particularly to the outnumbered and outgunned forces holding one end of the bridge in Arnhem, who were overrun on Sept. 21.

Between 15,000 and 17,000 Allied troops were killed, captured, or wounded in Operation Market Garden. Nearly three-quarters of the British 1st Airborne Division’s 10,600 men were casualties or captured.

The British were trapped in German-occupied territory north of the river, surrounded by the enemy on three sides.

RCE commander Major Michael Tucker and Lieutenant Russell Kennedy located areas where storm boats could be launched at Valburg, near Arnhem. A convoy carrying the boats arrived that afternoon.

“The 23rd Company had no training in manhandling the boats,” wrote David Bennett in an article in the Winter 2005-2006 issue of the Canadian Military Journal. Normally a derrick was used to unload the boats, stacked in threes on trucks, but without one the engineers had to unload and carry the vessels “over a quarter of a mile (half a kilometre) in the dark and rain, through the mud and over two dykes, in terrain interdicted by artillery fire.

“Prior to departure, each boat had to be equipped, engine fitted and fuelled…,’ wrote Bennet. “Dry and empty, the stormboats officially weighed 500 pounds (226 kilograms), up to half as much again when wet and fully equipped.”

“It is estimated that approximately 150 boatloads were brought back by the stormboat crews and the average load carried was 16 passengers.”

An artillery barrage and feint were planned to distract the enemy as the extraction took place in the dead of night.

The enemy was not preoccupied enough, however. The trip across the river took only three or four minutes, but it was a lethal journey.

“There was a great deal of enemy fire during the night,” reported Tucker. “Machine guns set on fixed lines swept the river and beaches on both sides…. Mortar and 88-mm fire fell everywhere.” And there were snipers, two of which were “liquidated,” said Tucker, by airborne troops.

Only one of the first four boats managed to retrieve men safety. The other three were either holed by rocks, hit by a mortar or swamped.

Despite destruction and engine failure, the Canadians eventually had 14 boats working, launched at intervals. One boat evacuated nearly 500 men in 15 treacherous trips.

The rescue vessels were hard to manoeuvre. They had no reverse gear, no clutch and stalled easily. “In the rain, they were plagued by electrical failures which sometimes disabled the boats in mid-river, often under fire,” wrote Bennett.

Once stalled, a cranking rope had to be pulled to restart the engine, and not everyone had the knack. This was particularly dangerous because “the crossing, reception point and rear depot behind the dykes were under constant fire,” wrote Bennett. “The crossings and launch points specifically by machine-gun and mortar fire.”

“The night was intensely dark, but fires started by our bombers in the afternoon and the numerous flares sent up by the enemy must have revealed a great deal of our movement to him,” Tucker said in his report.

“These fires helped us greatly too, since they provided beacons by which our boat crews could direct their craft,” noted Tucker. Heavy rain was a boon, resulting in fewer casualties than if the night had been clear.

“It was impossible to regulate the number of passengers carried in boats at times. Men panicked and stormed onto the boats, in some cases capsizing them,” reported Tucker. “In many cases they had to be beaten off or threatened with shooting to avoid having the boats swamped. With the approach of dawn this condition became worse. They were afraid that daylight would force us to cease our ferrying before they could be rescued….

Tucker reported that his men also had to care for the wounded, meaning boat crews were driven to exhaustion before they could be relieved.

By 4 a.m., only two boats were still in service.

Lieutenant Russell J. Kennedy managed to get a stalled boat started and, aided by two men, set off for another rescue. “On the north bank they encountered an uncontrollable mass of men,” said Bennett. The boat sank and was re-floated after an hour and managed the return propelled by “two paddles and some rifle butts.” 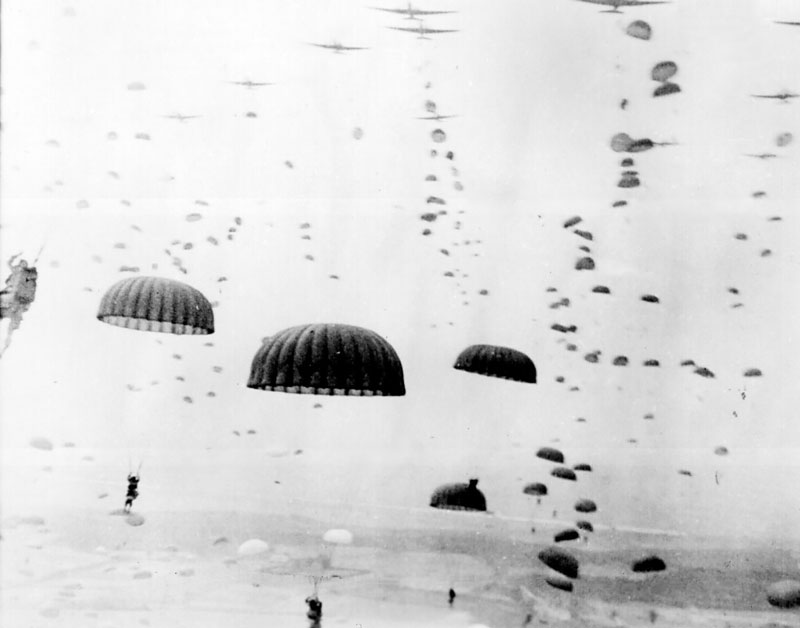 Parachutes open overhead as waves of paratroops land in Holland during operations by the 1st Allied Airborne Army.
U.S. Army / Wikipedia.org
Kennedy found another boat, filled it with people and set out again, towing two other fully loaded boats. In one, all but four men were hit by machine-gun fire. Kennedy’s boat landed at 7:20 a.m.

“Lieutenant Kennedy, in addition to making a recce, planning the operation and supervising the off-loading and delivering the stormboats to the launching sites, took command of a boat when these tasks were completed and brought off 125 men from the bridgehead under very trying conditions which prevailed with the advent of daylight,” wrote Tucker. Kennedy was awarded the Military Cross for his actions.

“All of the boat crews were magnificent,” said Tucker, “and only gave up their ferrying when their boats were no longer operable or else when they were exhausted and had to be ordered from the beach.”

Tucker also lauded the performance of Captain Jean Mongeon, a padre experiencing combat for the first time: “In addition to the normal duties of attending wounded and bringing courage and cheer to the exhausted men, he helped with the carrying of stormboats, carried petrol to the beach and seemed to always be present where he was most needed.”

“Our own RAP (regimental aid post) dressed 69 stretcher cases as well as attending to over 100 walking wounded,” reported Tucker. “Greatcoats and other clothing were used to improvise stretchers and were given to men who were in desperate need of cover from the elements.”

But the work of the 23rd Company was not over yet, wrote Bennett. After Operation Berlin, the engineers rescued evaders and ferried resistance members back and forth.

The 23rd Company’s work near Arnhem ended nearly two months after Operation Market Garden, when its men ferried 6,500 men of the 101st U.S. Airborne Division across the Waal River.

Concluded Bennett: “The performance of the Canadian engineers, particularly the 23rd Field Company in the Arnhem evacuation, was, by all measures, an outstanding small-unit action in the North-West Europe campaign.”

All Posts
PrevPrevious ArticleUnderstanding Ukraine
Next ArticleWindows to another timeNext