Home » Our Veterans » The Dieppe Mountie 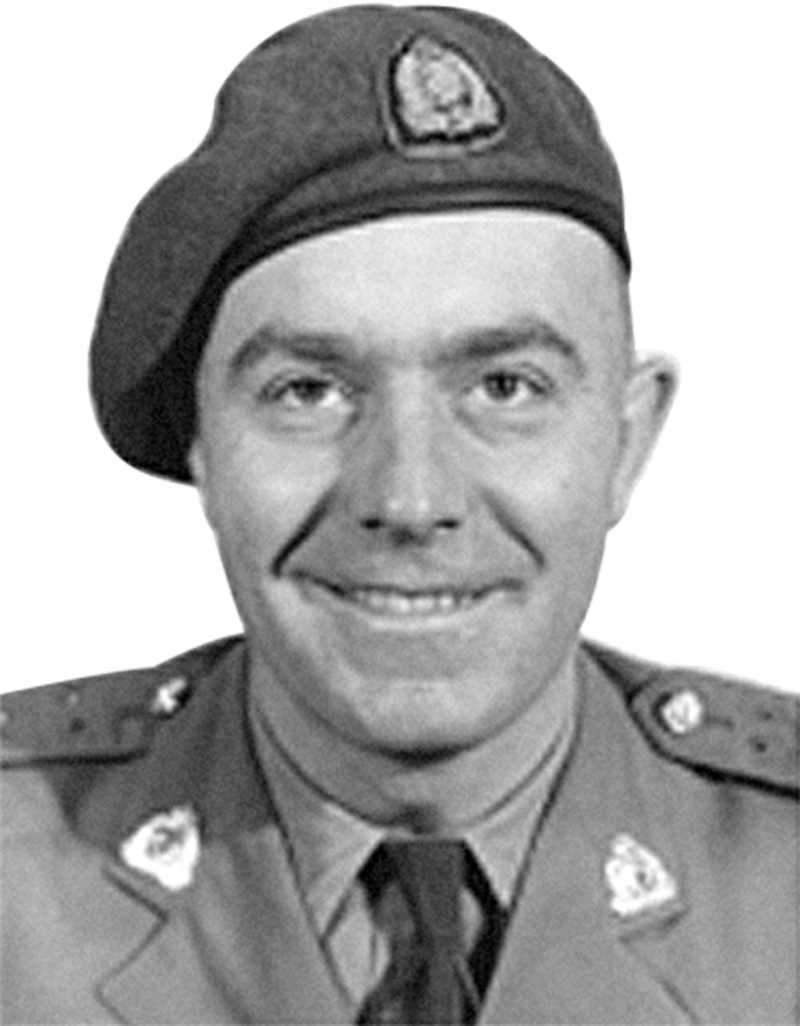 Captain Edward Hammond Stevenson commanded the Dieppe detachment of No. 2 Provost Company, a military police unit that was to help direct troops and keep the beach orderly during Operation Jubilee—until the raid went disastrously wrong. As a constable in Winnipeg, he had volunteered for service overseas, interrupting his career with the Royal Canadian Mounted Police from November 1939 to February 1946. He was discharged from the army with the rank of major and returned to the RCMP, eventually becoming assistant commissioner. After the war, he wrote this account of his experiences of that fateful day, Aug. 19, 1942. It is published here for the first time. 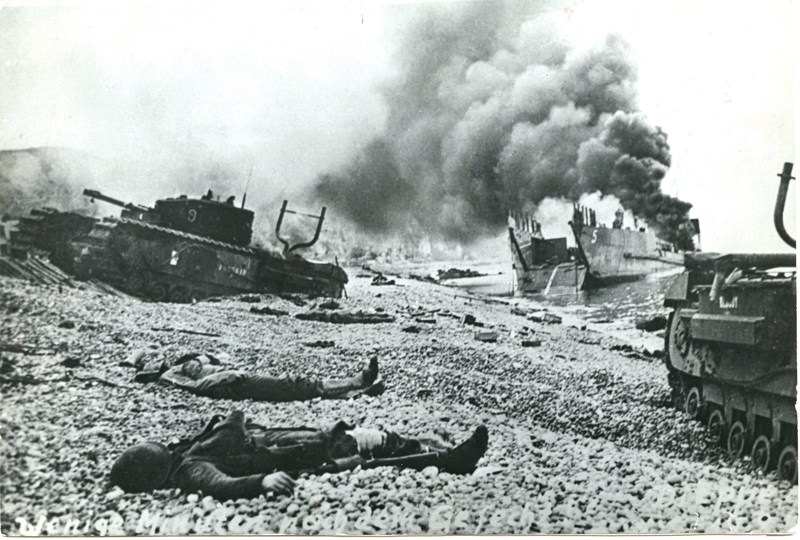 As the 2nd Canadian Division had been chosen for a “raid in force” on the French coast, it was only right that if provost were to be used, it should be the company’s own authorities. Early in 1942, I had been given command of No. 2 Provost Company with two other members of the Royal Canadian Mounted Police, second-in-command Lieutenant Peter (Pete) Oliver, and third officer Robert A. Ogilvie.

he No. 1 Provost Company in December 1939, including the author (highlighted near the centre) and Lieutenant Peter (Pete) Oliver (circled at the right). Oliver was the only provost killed in the Dieppe Raid.
LAC/3734904

This company had, almost since it landed in Great Britain, been officered by members who had previously been part of No. 1 Provost Company (RCMP), and so the policy of enforcing discipline came with them.

But No. 2 included men from all walks of life and very few members had actually been police officers previously. Consequently, the company had considerably more to learn than No. 1.

In May, men of the 2nd Division were dispatched to Britain’s Isle of Wight for intensive training and 20 members of No. 2 Provost Company, myself included, accompanied them. On our arrival, we were told that discipline and local orders were to be strictly enforced and, in addition to our regular functions, we were to take part in the exercises.

With the strict regulations and the censorship of mail, every man was aware that this was not just another exercise. And it looked as if the real thing wasn’t too far off. Morale went sky high and every man pitched in with his whole heart.

The men were stationed at Cowes, and their duties became so numerous that it was decided that more troops were needed. As a result, the parent company on the English mainland supplied a further 30 men, bringing the total provost in this special force to 50.

Day after day the practices went on—small scale exercises, weapons training and loading and unloading different landing craft. Given the scale of the operation and the fact one like it had never been attempted, many experiments were conducted, which often caused considerable hardships and many men received an icy bath in the English Channel in the early hours of the morning.

Finally, the day arrived when we were placed aboard various craft. As soon as everyone was on board, we were told the plan—to hit the Germans hard and fast.

Of the 41 men we started with, 19, including one officer, had been left in France.

We stayed aboard these craft for almost a week wondering what had happened and why the action was delayed. Then, to everyone’s dismay, we were returned to the mainland and back to normal provost duties in a divisional area in southern England. It was a real letdown and there was a feeling of having been misled.

About the middle of August, I was summoned to attend the general officer commanding’s conference where I learned the operation would go ahead. I was instructed to arrange a small exercise within my company. There were many details to arrange, and I took Oliver into my confidence to make plans for the forthcoming mission.

As the provost detail was to travel in tank landing craft, it was decided to split them up into five smaller parties in different boats. This way, if one boat got hit the whole detail wouldn’t be lost. The larger group consisted of two officers and 39 other ranks from the pick of the company.

Our aim was to go in with the early assault wave and assist in clearing the beach as soon as possible. All troops were to be directed off the beach and we were to assist engineers in moving equipment and ammunition from the shoreline as fast as possible. Once this had been done, we were to set up cordons above the beach in Dieppe and direct returning troops to the specific places where the heavier craft were able to land. This would prevent congestion and keep the beach clear and orderly. The provost would be the last to leave—surely an uncomfortable feeling and most certainly making us front-line troops.

The operation commenced in the early hours of Aug. 18. By afternoon, all units were aboard their various craft in different harbours. Everyone travelled light. No one had anti-gas equipment and the main concern was arms, ammunition and food, which consisted of bully beef and hardtack biscuits.

It was a beautiful afternoon, and the English Channel was like a millpond.

We moved out into the Channel and formed into convoys. Everywhere one looked there were groups of small boats—there seemed to be no end to them, which did give us a small measure of confidence.

We travelled all that night. In the grey dawn as we approached close to land all hell suddenly broke loose and we were “in it.”

It is hard to record my own reactions for everything happened so fast.

We glided up to the beach and started to unload. The shoreline was under heavy crossfire. The fire from the German 88mm guns and mortars were dropping into the boat and all around it. One after another, the sailors at the helm were killed at their posts until the boat was being steered by a sailor standing on the prostrate bodies of his comrades. I remember, too, the skipper of our boat and his second-in-command taking turns wearing the one steel helmet we had.

All the naval gunners were knocked out and some men took over their posts. While all this was going on, we were unloading three tanks. Unfortunately, they only managed to clear the ramp before they were all taken out. Then the company of infantry started off, but few of them got very far. Our captain pulled back from shore to get a breather.

We went in again alongside a destroyed ship where there were many wounded and dead. As we were of no use on the beach at this time, we helped the casualties into our vessel. We already had quite a few wounded on our ship and they were being looked after as well as possible under the circumstances.

We received instructions not to proceed inland, but to attempt to take as many soldiers as possible off the beaches.

I had no word on the remainder of my group, though I questioned many troops as they came aboard. Many of the provost had gone in earlier and when they found they could not function as originally planned, they manned machine guns whose gunners had been knocked out and assisted as best they could. 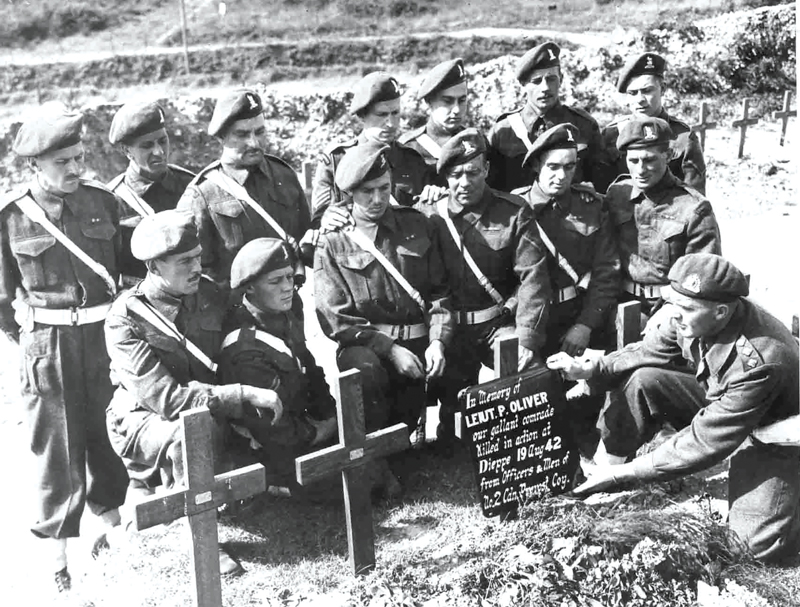 Canadian soldiers, including Captain Chris Forbes, hold a memorial service at the grave of provost Oliver in 1944.
Lieut. Ken Bell

The boat I was on returned to Britain, and since we had so many wounded aboard, we were allowed to go right into the harbour. It was a very welcome sight to see members of No. 1 Provost Company on duty.

I returned to my company’s headquarters where Chris Forbes oversaw the rear party and we started checking our numbers. This continued until we had located our wounded, or had at least accounted for all those who took part in the operation. Of the 41 men we started with, 19, including one officer, had been left in France. Of the remainder, seven had returned wounded.

We learned later that of the boys left in France, all but one was alive, the survivors prisoners of war, although several had been wounded. An eyewitness reported that Oliver had stepped off his boat onto the beach and was almost immediately hit by a mortar shell that killed him.

In the meantime, mail and parcels had accumulated for the PoWs. We wanted to assist these boys and do at least a little bit to ease their lot. Forbes found that all we could do was to send them cigarettes.

A company “smoker” was held where unclaimed parcels were unwrapped and auctioned off. The men of No. 2 Provost Company had formed a comradeship that was almost brotherly—ultimately collecting more than $200. This was placed in an account known as “No. 2 Pro Coy Prisoner of War Fund” and the smokes were immediately sent on their way to our boys in chains.

As a result of our part in this operation, our “stock” with other troops went up 100 per cent, causing them to take more interest in our work. The result was a much better understanding and a far higher regard for the Provost Corps.