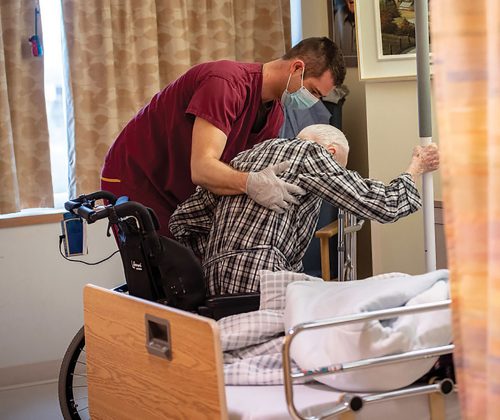 Veteran Fraser (Tommy) Gray, 88, a paratrooper with Princess Patricia’s Canadian Light Infantry in the Korean War, was among 300 residents and nearly 100 staff members who contracted COVID-19 in an Ontario long-term care home.

Hospitalized for weeks, Gray was fortunately not among the 78 residents of Orchard Villa in Pickering, Ont., who died. Outbreaks were declared at Orchard Villa’s long-term care and retirement homes in the first week of April and declared over June 11.

Orchard Villa was one of the worst-hit long-term care homes in Ontario, and among five to receive help from 275 members of Canadian Armed Forces medical teams beginning April 28. In mid-May, 1,400 CAF members were also in 25 facilities in Quebec. By the end of June, 55 of them had contracted the virus.

In late May, the CAF filed a disturbing report of observations by CAF members helping at the five Ontario homes.

Ontario Premier Doug Ford described the report as horrific, shocking and gut-wrenching. “This tragedy must serve as a wake-up call to our entire country…COVID-19 has exposed the deep, deep cracks in [the] long-term care system.”

The CAF report noted issues in both provinces caused by the pandemic itself—staffing shortages, inexperienced replacements and lack of personal protective equipment.

The report on Quebec homes was far less detailed than that from Ontario. But the Ontario report raised concerns about a history of poor medical practices, poor patient care, lack of access to supplies and poor communication among staff and with patients and their families—and concerns there may be issues across the country.

“It is absolutely scandalous,” said Jane Philpott, a physician and former federal health minister, on CTV’s Power Play. While some long-term care facilities are well run, she warned there must be more than just five bad apples. “Hopefully, this will be the one [report] that will trigger…a fully national inquiry—not just a localized, regional look.”

Gary Gray of North Bay, Ont., had concerns about understaffing before the epidemic, which were magnified when his father Fraser, an Alzheimer’s patient, transferred from the facility’s retirement residence into its long-term care wing. “The very first day my dad was in long-term care, he broke his back.”

No one had checked on him after supper. He was found on the floor at 2 a.m. The incident put him in a wheelchair.

Even before the pandemic, Gary had concerns about inadequate staffing and poor communication affecting his father’s nutrition, access to exercise, activities and ability to go outside. Also, “it’s not a cheery atmosphere.”

Although inspections by Ontario’s long-term care ministry had reported problems at these long-term care homes prior to the COVID-19 pandemic, Ford has said it took the CAF report to convey the magnitude of the problem. He called on the federal government for help. “No province can fix it alone. As Canadians, we need to protect these residents.”

“We need to do a better job protecting our elderly in long-term care homes,” Prime Minister Justin Trudeau said in a press conference, describing the CAF report as “deeply disturbing and extremely troubling.”

Veterans Affairs Canada [is] supporting 3,989 veterans in long-term care facilities across the country.

The CAF noted cleanliness was a concern at several Ontario facilities: an insect infestation; rotten food on stacked trays; and fecal contamination of a patient’s room.

Concerns about quality of patient care included aggressive behaviour by staff and use of demeaning language; force feeding or feeding patients without sitting them up; and ignoring patients’ complaints of pain during procedures. In one residence, patients were left in soiled diapers, in another staff was forbidden extra supplies to protect beds of residents who routinely soil themselves.

There were problems with communication, including inaccurate information to families about pain levels, nutrition status and physical condition.

As of March 31, Veterans Affairs Canada was supporting 3,989 veterans in long-term care facilities across the country, including four of the five mentioned in the Ontario report and at two Quebec facilities aided by the CAF.

VAC  reported June 22 that it was aware of 58 cases of veterans diagnosed with, and 18 deaths from, COVID-19. When VAC becomes aware of a confirmed COVID-19 case in a long-term care facility “we work closely with the veterans, their families and facility management to ensure that all the veterans’ needs are being met,” said Marc Lescoutre of VAC media relations.

But the department tracks only its own clients—mostly Second World War and Korean War veterans. There are thousands more modern veterans not supported by the department who are living in long-term care facilities across the country.

“Many of our veterans are in long-term care, and to know that some of them are being mistreated and ignored is shameful,” said Dominion President Tom Irvine of The Royal Canadian Legion. “The fact that our governments have known for a long time that some of our most vulnerable citizens are living in deplorable conditions during their final years of life, is disgraceful. We need a systemic overhaul–and now.”

“We have been shouting from the rooftops for many years,” said Dave Gordon, who chairs the Legion Ontario Command Veterans Services and Seniors Committee. “In most cases, if not all, many staff members at long-term care facilities are underpaid for the work they do.”

Legion branches and provincial commands across the country have donated millions to long-term care homes over the years and have long been advocating for better conditions in care centres.

In Canada to June 28, more than 80 per cent of Canada’s 8,522 deaths from COVID-19 were among residents of nursing, long-term care or retirement homes.

An independent commission into Ontario’s long-term care system is due to start this month. Advocates say a fully public inquiry would result in a more thorough examination because officials can be compelled to testify under oath and confidential documents being made public. The Ontario patient ombudsman is also investigating the province’s oversight of long-term care homes.

In Quebec, the coroner’s office has ordered a public inquiry, the ombudsman is investigating and three orders representing professional health-care workers are launching a joint investigation into quality of care.

Meanwhile, individual lawsuits and class actions against some Ontario and Quebec long-term care homes have been announced.