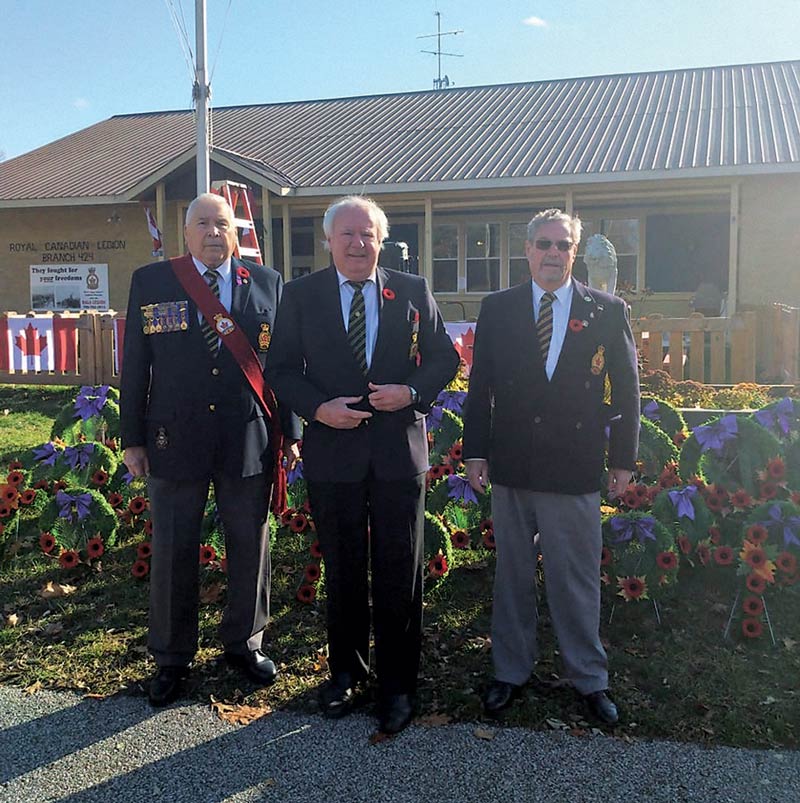 Bala Branch, a small Legion branch in the heart of the Muskoka district, has been reinventing itself for the new realities of COVID-19.

The branch is housed in a former public school in the village of Bala, Ont., in cottage country about 200 kilometres north of Toronto. It has some 170 members, most of whom joined in recent years.

Like many across Canada, the branch was shut down in March 2020, along with restaurants and bars across Ontario. It reopened in June, operating under all the health and safety guidelines, then closed again in December as COVID-19 cases surged.

“The biggest thing, though, is the mental health support we provide.”

President Dennis Mills, a former member of Parliament for a downtown Toronto riding, said the virus has changed the nature of the membership.

“It used to be 65 per cent of our membership was local, and 35 per cent were cottagers. However, being a cottager used to be a two-month thing then, it got to a four-month thing. Now with COVID, I would say at least a third of our cottagers are here year-round.”

“There may be only 15 people here at once [when open under COVID restrictions], but people come and go. That’s what the Legion is all about. We’re not shy about it.”

About five years ago, said Mills, “I was at the branch’s annual general meeting and I was nominated to become membership chair. I looked around the room and saw less than 20 people, and they were getting older. So I said, ‘OK, I’ll do it.’”

In a meeting with then-President Royce Jarick, it was decided that it was time to put some energy into the branch.

“If the Legion is going to survive, it has to become more welcoming to the young people in the community.”

The Bala community has a strong musical heritage. Since 1942, a large dance pavilion, The Kee to Bala, has featured Glenn Miller, Duke Ellington, Louis Armstrong, April Wine, Rush, The Tragically Hip and many others. So the logical place to start was a series of concerts. Tickets were $10 each, which didn’t even cover the cost for the bands, but the place was packed with 160 people, buying drinks and snacks. The first concert was a Roy Orbison tribute band. After that was a Beach Boys tribute.

Next, the branch started pool tournaments every Tuesday night, which brought in a younger demographic of people who weren’t familiar with the Legion.

“If the Legion is going to survive, it has to become more welcoming to the young people in the community,” said Mills. “We reinvented the demographic of who goes to the Legion branch.”

They approached community businesses to be sponsors. A local law office provided the branch with new kitchen equipment. The Beer Store donated a draft beer system.

“The greatest support we have gotten is from the Beaver Creek Institution,” said Mills. The medium- and minimum-security correctional facility is 30 kilometres away in Gravenhurst. “We have had work crews of about 10 people in here for 90 days in the past few years. They have painted the walls, fixed the ceiling, built us a shed for storage and cleaned everything. This is all work we could never have afforded.”

The branch’s big project is to create a 128-room veterans’ and seniors’ residence called Bala Legion Manor, to be built on the school’s former playground. Modelled on a Legion complex in Victoria, the plan is to build a four-storey structure adjacent to the branch. A medical clinic and perhaps a store are to be included. Rental revenue will help the branch’s financial picture.

was with Legion Magazine since 1989 and served as staff writer, assistant editor and news editor. Before joining the magazine, he worked for The Huntsville Forester, The Edmonton Sun and Maclean’s. He is also the author of plays, four books of poetry and “Canada and the Victoria Cross” in the Canada’s Ultimate Story series.
All Posts
PrevPrevious ArticleFind-Share-Discuss: March/April 2015
Next ArticleDigital democracy in actionNext