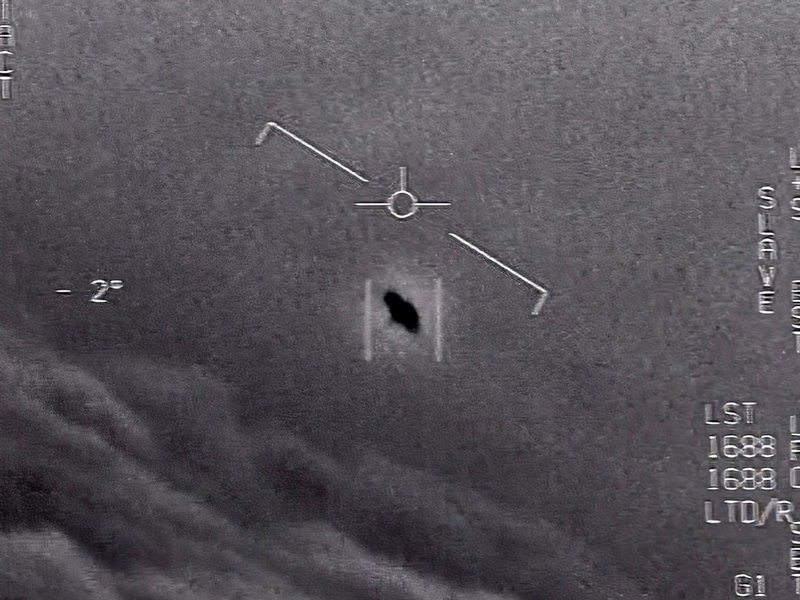 In an image from video footage from 2015, an unexplained object is seen at centre as it soars among the clouds, traveling against the wind. “There’s a whole fleet of them,” a naval aviator tells another, though only one indistinct object is shown.
Department of Defense AP
The U.S. National Aeronautics and Space Administration has launched a nine-month study into UFOs or, as the world’s leader in space exploration calls them, UAPs (unidentified aerial phenomena).

The 16-member team includes professors, scientists, an oceanographer and others who study space—former NASA astronaut Scott Kelly and science journalist Nadia Drake among them. Their work began on Oct. 24 with an eye to the future.

“The independent study team will lay the groundwork for future study on the nature of UAPs for NASA and other organizations,” the agency said in a statement.

“To do this, the team will identify how data gathered by civilian government entities, commercial data, and data from other sources can potentially be analyzed to shed light on UAPs. It will then recommend a roadmap for potential UAP data analysis by the agency going forward.”

Coming on the heels of the first public congressional hearing on UFOs in half a century, plus Pentagon plans to create an office to track UAP reports, the study will focus solely on unclassified data. A full report is to be released publicly in mid-2023.

NASA first announced the study in June 2022, saying the limited number of unexplained UFO sightings “makes it difficult to draw scientific conclusions about the nature of such events.”

“NASA believes that the tools of scientific discovery are powerful and apply here also,” said Thomas Zurbuchen, associate administrator for the Science Mission Directorate at NASA Headquarters in Washington. “We have access to a broad range of observations of Earth from space—and that is the lifeblood of scientific inquiry.

“We have the tools and team who can help us improve our understanding of the unknown. That’s the very definition of what science is. That’s what we do.”

The organization has said there is no evidence that UFOs are extraterrestrial in origin. A U.S. government report released in June 2021 said, “the limited amount of high-quality reporting on unidentified aerial phenomena hampers our ability to draw firm conclusions.”

The government document said there is no evidence of aliens, but acknowledged 143 UAP cases since 2004 that could not be explained.

Many were observed by U.S. military aircrew, whose onboard equipment recorded apparent objects moving with inexplicable speed, agility and acceleration.

In July, the Pentagon announced it was opening the All-domain Anomaly Resolution Office to investigate unexplained aerial threats.

While the June report was short on answers, it did offer a range of possibilities, including conjecture that UFOs could be part of a secret U.S. government or military project. It did not, however, cite any such cases.

Nor could it back up suggestions they could be products of clandestine programs in other countries with advanced aerial capabilities, such as Russia or China.

In July, the Pentagon announced it was opening the All-domain Anomaly Resolution Office to investigate unexplained aerial threats. In November 2021, the U.S. Department of Defense also created the Airborne Object Identification and Management Synchronization Group to “synchronize efforts … to detect, identify and attribute objects of interests in Special Use Airspace (SUA) and to assess and mitigate any associated threats to safety of flight and national security.”

The U.S. military has a lengthy history of chronicling and investigating UFO sightings. The first U.S. Air Force program to investigate UFO sightings was mounted in 1947.

Called Project Blue Book, it probed 12,618 reported sightings over two decades. By the time the project ended in 1969, around 700 sightings were still categorized as “unidentified,” according to the U.S. National Archives.

The conspiracy theory movement, arguably, took roots in Roswell, New Mexico, in July 1947, with the crash of an air force balloon that was being developed to spy on the Soviet nuclear program. The U.S. military quickly cleared the crash site and refused to explain the incident or the clandestine program responsible, Project Mogul.

Roswell has been the object of speculation ever since, with wild claims persisting to this day that the military base houses a recovered UFO and even the remains of its alien crew.

“Given the paucity of observations, our first task is simply to gather the most robust set of data that we can.”

Canada has also long maintained both military and civilian files on UFO sightings. Federal government officials agreed in June to share information about UFOs with their American counterparts.

“Given the shared priority for nuclear safety and security of nuclear facilities, and the growing interest in UAPs in both Canada and the United States, the [Canadian Nuclear Safety Commission] is committed to raising the issue with its United States counterpart and sharing any related information going forward,” the deputy minister of natural resources, John Hannaford, said in a letter dated June 6.

“We have reached out to counterparts in the United States Department of Energy regarding the Office of the Director of National Intelligence’s Preliminary Report on UAPs to learn more about its perspective in order to help inform analysis and action in Canada.”

“Given the paucity of observations, our first task is simply to gather the most robust set of data that we can,” said Spergel. “We will be identifying what data—from civilians, government, non-profits, companies—exists, what else we should try to collect, and how to best analyze it.”

NASA noted the importance of acquiring extensive data since they say UFOs are both a national security and an air safety concern and as such align with established agency responsibilities.

Said Zurbuchen: “Understanding the data we have surrounding unidentified aerial phenomena is critical to helping us draw scientific conclusions about what is happening in our skies. Data is the language of scientists and makes the unexplainable, explainable.”