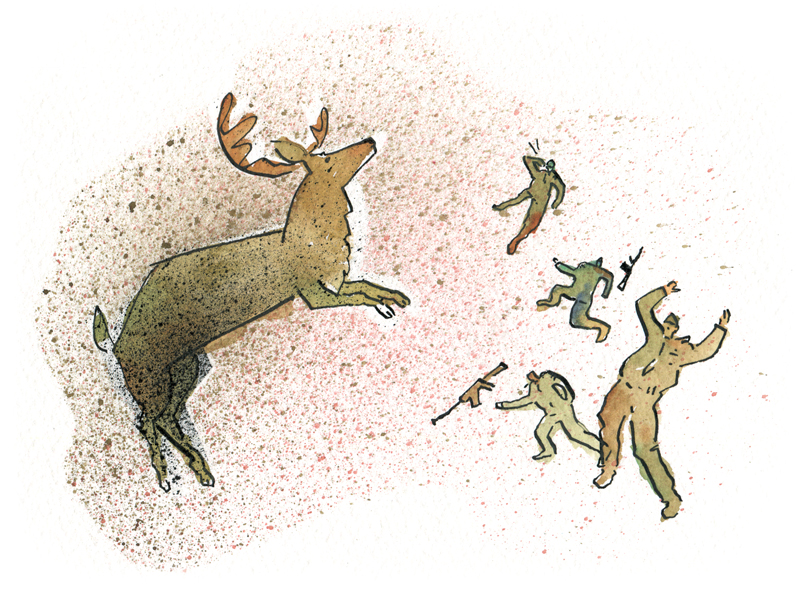 Alex Gauthier, a retired sergeant from the Governor General’s Foot Guards, recalls a reserves exercise at CFB Petawawa in August 1984.

As a corporal with two years of experience, he was surprised to be made a section commander for the two-week exercise.

To start, the troops dug in, rigged concertina wire, dialed in their support weapons and placed trip flares along the perimeter. But days and nights of routine soon faded to boredom.

“I tried to keep the troops motivated by saying: ‘Hey, we’re going to get bumped tonight guys, switch on.’ It never happened.”

Then, one night, a trip flare went off.

Gauthier looked out to see a huge whitetail buck, frozen in place by the bright flare.

“Somebody threw a thunder flash, then another. The whole company stood to and they were all shooting.

He crawled to the command trench and found the platoon warrant on the radio.

“I yelled in his ear that we are throwing a hell of a lot of the Queen’s ordnance on the plain all because of a bloody deer! The handset fell to his side and his mouth went agape. He looked at me for a few seconds and then huddled with the platoon commander.

“He came back, smiled and said: ‘Alex, let’s treat this as a contact, the guys need
to do their job.’”

Eventually, the commander pierced the
sporadic rifle fire with a whistle blast and things calmed down.

Despite the mistaken barrage, the incident helped the group bond as a team, which became more aggressive in its patrolling and “The platoon commander and warrant made the right call. They exploited an opportunity to train their team.”

Mascots have long been a part of the military life, although there are times when rules must be bent to accommodate them.

During the Second World War, the Calgary Highlanders were accompanied by an Aberdeen terrier named Heather. When it came time to cross the Atlantic in a troopship, the regimental band stowed Heather in the bass drum, safe from the prying eyes of officialdom.

During the Korean War, HMCS Cayuga had a ship’s dog named Alice. She was apparently fearless and went into the drink several times and had to be rescued.

It is said that the shout “Alice overboard!” drew a quicker response than the traditional “Man overboard.”

During a stint with the UN peacekeeping mission in Cyprus in 1974, the Canadian Airborne Regiment acquired a large white duck, which marched into its camp one
morning. Since it was clearly a waterfowl, it was signed on as a naval asset and dubbed Petty Officer Wilbur Duck.

The class finished with a jump. As he boarded a Chinook helicopter, a buddy asked for a favour: “Rosie, can you do a pivot exit and watch my exit?”

In a pivot exit, the jumper turns back to look at the aircraft.

As Rosie pivoted in the air, his goggles blew off. The slipstream blinded him completely.

On landing, his buddy asked how his jump looked.

“Awesome,” Rosie said. “One of the best dive exits I’ve ever seen.”

He has never told him he never saw a thing.

The handset fell to his side and his mouth went agape.

Louis Gelman of Toronto served in the army during the Second World War. He was wounded and taken prisoner in the closing months of the conflict. He was liberated on April 12, 1945, and sent to a hospital in Birmingham, England.

One day, he saw a young woman walking through the ward, wishing everyone well.

The nurse looked at me and said, ‘Sorry, can’t do that.’

‘What do you mean?’ I said. ‘I fought for your country, I nearly got killed, twice, you know. You’re telling me I can’t even go out with an English girl?’

•Since his last report, he has reached rock bottom and has started to dig.

•This officer should go far and the sooner he starts, the better.

• He has delusions of adequacy.

•This officer should not be allowed to reproduce.

•He sets low personal standards and then consistently fails to achieve them.

•This officer reminds me of a gyroscope; always spinning around at a frantic pace but not really going anywhere.

•This officer is really not so much of a has-been, but more of a definitely won’t-be.