Remembrance, which is two paintings, depicts a young girl walking through the ruins of a battlefield.
PHOTO: BRIAN LORIMER

Brian Lorimer paints big, vivid pictures and for the last two years he has dedicated himself to capturing and commemorating the First World War. He has titled this newest series Project Remembrance and it was completed just in time for the centenary.

Lorimer was born in Belleville, Ont., in 1961, studied at the Ontario College of Art and Design for three years and a decade later founded a studio focusing on mural design. He sold the business in 2002 and concentrated on his art. This artist has painted works as large as 76 feet long and Project Remembrance continues the tradition. It is made up of 36 canvases, most measuring five feet by six feet. But, it wasn’t enough to simply paint the war, the artist wanted to experience life in the trenches, albeit without the rats and artillery. Lorimer dug a 40-foot ditch on his land, “I needed to feel the trench, see it, make a connection with it to try and understand what I was about to undertake… Sitting within those tight confines made me just crazy enough to want to paint this painting (Winter Trench), plus 35 more.”

Then in the spring of 2013 he travelled to Belgium and France. “You can’t do a series of this magnitude without going there…it is amazing how close the lines are to each other,” he said. Inspired, he returned home and transferred those emotions into oil on canvas. Bold colour is splattered like blood over many of the compositions. The treatment works—it is energetic and raw—bringing to mind victims, violence and devastation. The colours in the painting Unknown Soldier give an unintentional nod to War Artist Eric Aldwinckle’s bold painting, The Survivor. Both artists rendered war in brash and splintered colour.

A percentage of the profits from Project Remembrance has gone to Support Our Troops, The Vimy Foundation and The True Patriot Love Foundation. Earlier this year, four of the paintings from the series were sold. On Nov. 5, 2014, the collection will be showing at the Metro Toronto Convention Centre, with 10 of the paintings up for sale. The artist has related items, prints and books, online at http://www.projectremembrance.ca.

These days, Lorimer paints full-time from his studio on the shores of Lake Mississagagon, Ont. 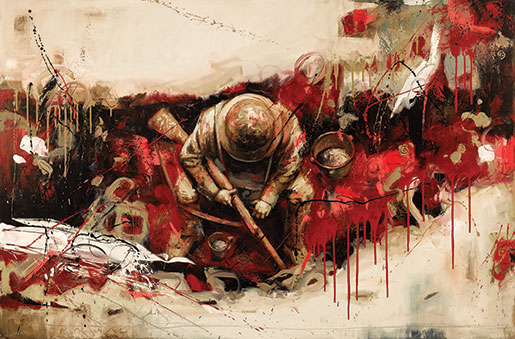 The painting Winter Trench resulted from Brian Lorimer’s experience in a trench he built on his property.
PHOTO: BRIAN LORIMER 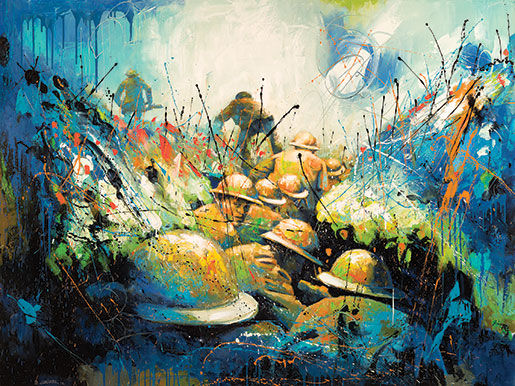 Over the Top depicts soldiers huddled in a narrow trench prior to an attack.
PHOTO: BRIAN LORIMER 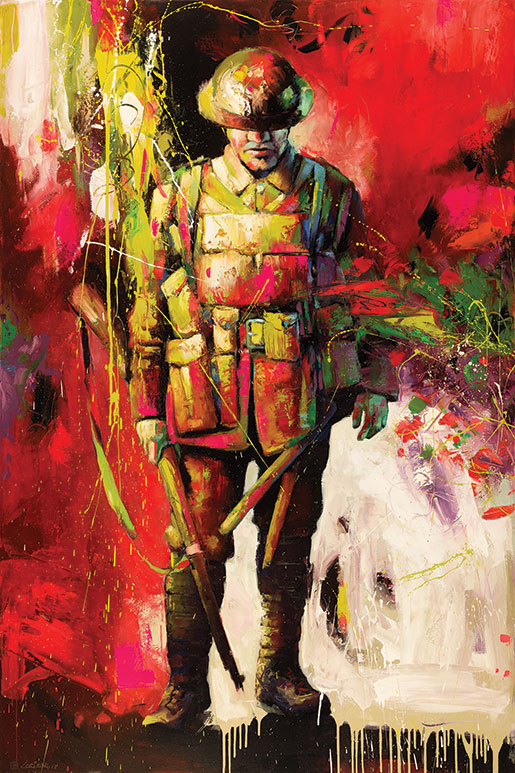 Unknown Soldier honours those men who never made it home.
PHOTO: BRIAN LORIMER