Bolting for the Baltic 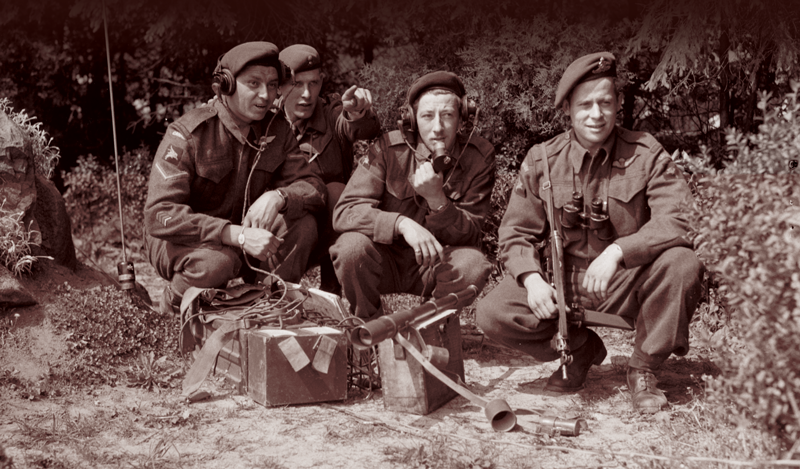 A forward observation group of the Royal Canadian Artillery were the first Allied troops to encounter the Red Army in the city
Charles H. Richer/LAC/53321/ 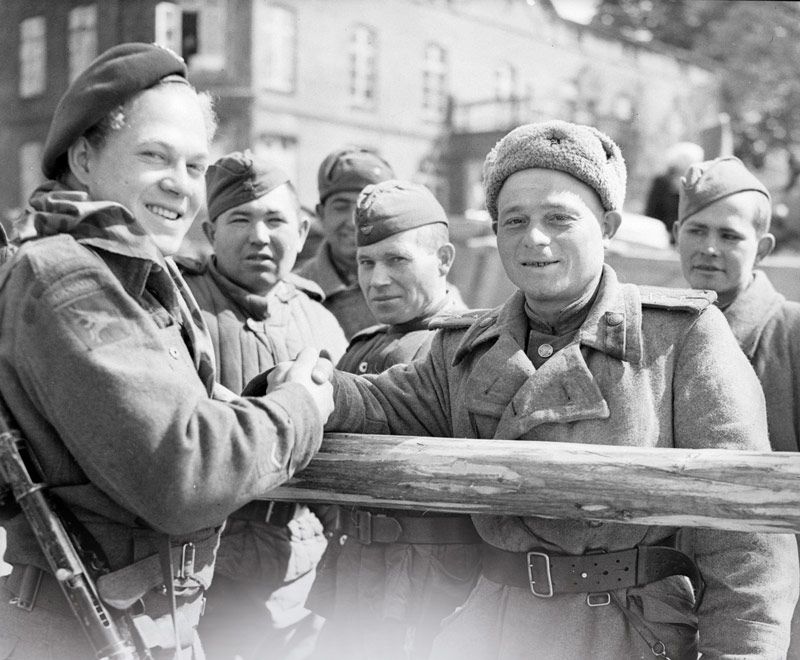 A Canadian soldier greets a Russian counterpart at a roadblock in Wismar, Germany, on May 4, 1945
Charles H. Richer/LAC/51509

Until Germany’s reunification in 1990, travel to Wismar was difficult for foreigners. It was located about 40 kilo-
metres behind the Iron Curtain, in what was then known as the Bezirk Rostock region of the Deutsche Demokratische Republik—or East Germany as it was known in the West. After the war, Wismar became one of the East’s largest ports with a well-developed shipbuilding industry. It was also a garrison town and home to two Soviet regiments from the 2nd Guards Tank Army. If the Cold War had turned hot, it was this force that would have thrust west across the North German Plain to capture Lübeck, then north toward Kiel and the Danish border.

The first meeting between eastbound Western troops and westbound Soviet troops occurred at the Elbe River near Torgau, Germany, on April 25, 1945. That American-Soviet contact was mainly a delicate tactical operation co-ordinated to avoid an inadvertent clash between the two Allies. On the other hand, the rendezvous of British and Soviet forces on the Baltic a few days later was governed by strategic military and political considerations. The British were keen to push north to Wismar to force the German Army Group northwest and the German military in Denmark to surrender to them rather than the Soviets. Plus, seizing the port city would also effectively block the Soviets from advancing into Denmark. Western Allies were fearful of communist expansion through Europe.

Recalled Eadie: “Waters was a Calgary boy. His cowboy instincts took over and he drove the tanks on at maximum speed.” 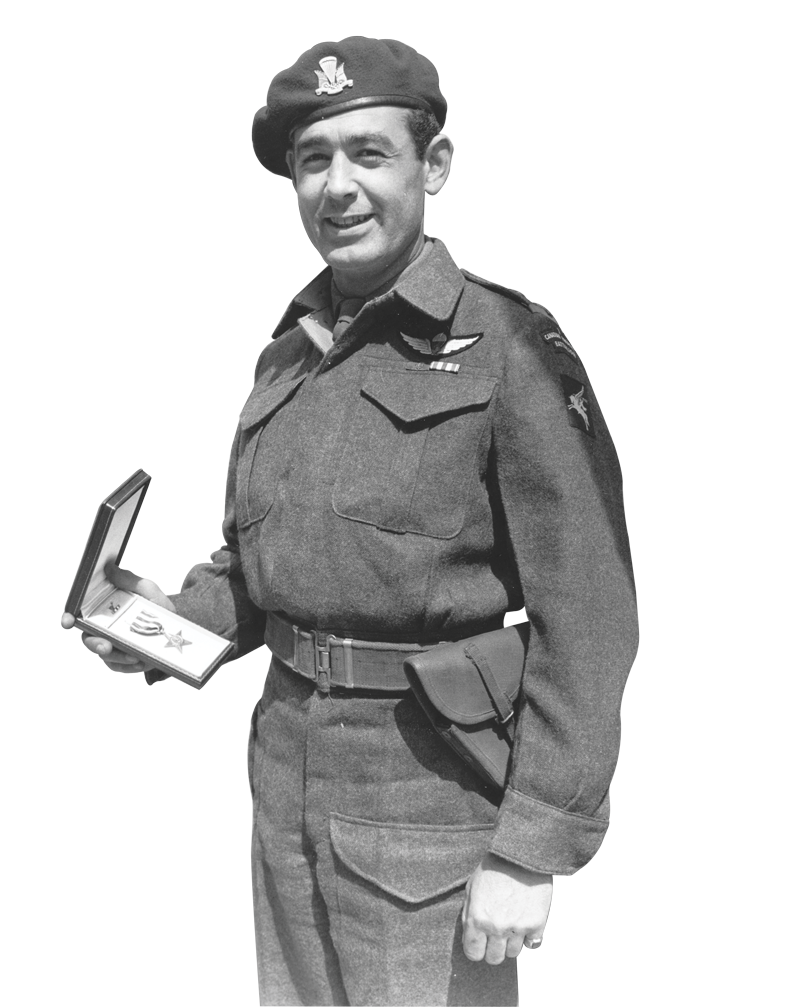 Following the March 24 Operation Varsity airborne assault—the largest air operation ever conducted in a single day in one location—Allied forces crossed the Rhine River to access northern Germany. In anticipation of moving farther north, the XVIII U.S. Airborne Corps, under command of the British 21st Army Group, formed a bridgehead across the Elbe to push north and east toward Wismar. Once across the Elbe, the British 6th Airborne Division was tasked to advance northeast as fast as possible to block the Russians.

“I followed immediately behind Stan’s tank in my Jeep,” recalled Eadie. “Stan Waters was a Calgary boy. His cowboy instincts took over and he drove the tanks on at maximum speed so that we cleared Wittenburg by 9 a.m.”

Quipped one Canadian paratrooper of the advance: “I never realised that a Sherman could do 60 miles an hour.”

The convoy met occasional pockets of resistance, but they were easily overcome with shellfire from the tanks.

In their dash, the Scots Greys and Canadians overran formations of fully armed German troops. “All resistance had collapsed because the Germans wanted us to go as far as possible,” wrote the Canadians’ war diarist. “Thousands of German troops lined the road and crowded the villages, some cheering us on, though most were a despondent-looking mob.” 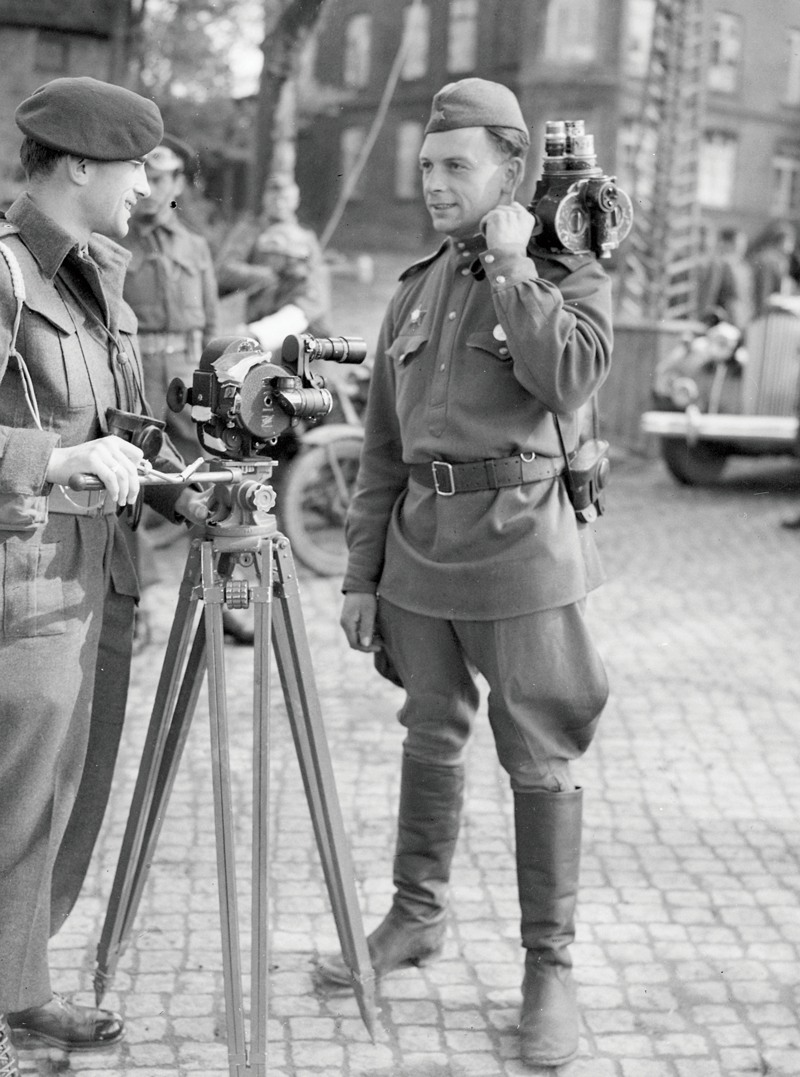 Lieutenant-Colonel Fraser Eadie, commanding officer of the 1st Canadian Parachute Battalion, with the American Silver Star he received in Wismar. Canadian and Russian cameramen in the city.
Charles H. Richer/LAC/3524328

At the end of the road lay Wismar, and the Canadians and Scots Greys entered the picturesque medieval town on May 2. They encountered some opposition at a roadblock where German troops had dug in but it was quickly overcome by ‘B’ Company who cleared the position while the Greys shot their way through the blockade.

Proceeding through Wismar, the Canadians quickly seized the bridges on the east side of the town. Companies were dispersed to ensure Wismar was securely in Allied hands. Several German destroyers and submarines were spotted in the harbour, but all escaped. There was little resistance. The Canadians and Scots Greys covered about 120 kilometres in the 12 hours before they arrived.

At 4 p.m., ‘C’ Company, which was covering the bridges on the east side of the town, met the first Red Army troops. The force belonged to the 3rd Tank Corps of the 70th Army of the 2nd Belorussian Front commanded by Marshal Konstantin Rokossovsky. One Soviet officer scouting ahead arrived with no idea that other Allied forces were in Wismar until he met the Canadians.

“He was quite put out to find us sitting on what was the Russians’ ultimate objective,” recorded the battalion diarist.

Initially, relations between the two Allies were cordial, despite the Soviet disappointment that their westward advance had been stopped. There was considerable “visiting” between Canadians and Russians. Indeed, the diarist noted the Soviets were the “most persistent and thirsty drinkers they had ever met.” The Canadians also recorded that the Russians were the “hardest looking bunch of toughs,” perhaps testament to the hard-fought campaign waged in the east to defeat the Germans.

On May 5, the Soviets established their own roadblock, 100 metres up from the Canadians. By May 7, the day that British Field Marshal Bernard Montgomery flew to Wismar to meet with his counterpart Rokossovky, the cordial relationship had broken down.

May 8 was VE-Day, and a week later the Canadians were leaving to start their journey home. On July 1, the remaining British troops departed. 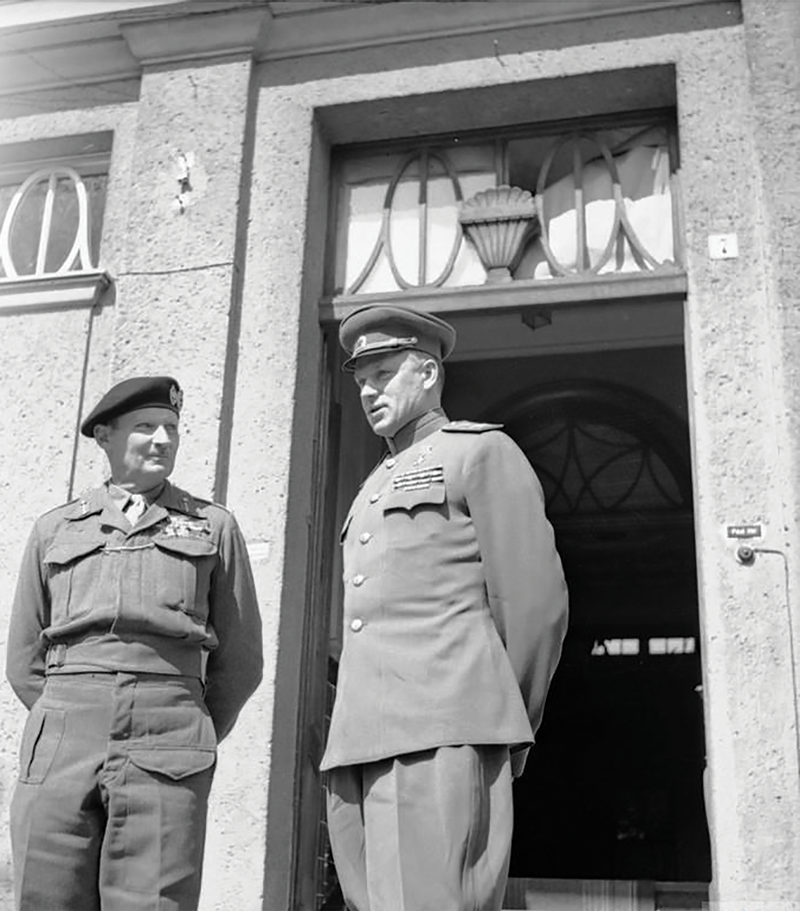 Wismar had been ceded to the Soviet Zone of Germany based on the occupation agreements of the Yalta Conference. As a result, the Russian troops soon took control of the city. But the brief occupation of Wismar by the 1st Canadian Parachute Battalion ultimately achieved its goal and helped limit westward Soviet advances.

The Fründt’s Hotel where the Allied battalion had established its headquarters looks virtually the same. 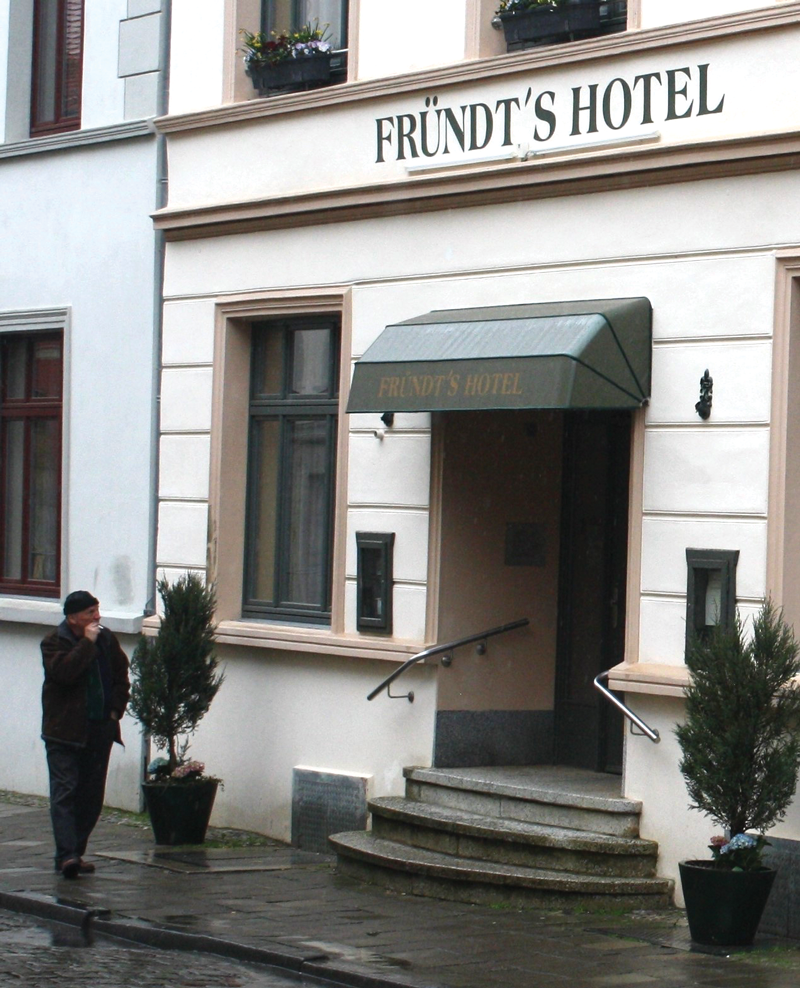 Those visiting Wismar today will find little has changed in the nearly 80 years since the end of the Second World War.

On their march into the city, the British and the Canadians had captured the Flugplatz Wismar, the aerodrome site about three kilometres northeast of downtown. Montgomery would land at the airport in advance of his meeting with Rokossovsky just five days after their arrival. Today, the small grass runway is used for light aircraft and gliders.

Meanwhile, the Canadians had set up a roadblock at the corner of Rostocker Straße and Gerberhoff, while Allied troops had paraded and held ceremonies in the Altstadt, the historic old town of Wismar and its Markt square, in the war’s waning days. The Markt’s Wasserkunst, a 16th-century water fountain designed by Philipp Brandin, and the surrounding buildings that figure prominently in the wartime photographs have changed little since 1945.

Likewise, the Fründt’s Hotel where the Allied battalion had established its headquarters looks virtually the same. And the large, stately house at the corner of Dr.-Unruh-Straße and Vogelsang where marshals Montgomery and Rokossovsky met on May 7
—which is only about a kilometre south of the Markt—remains unchanged, too, since the historic showdown.

Wismar has recognized the role Canada played during this final stage of the war with a small plaque on the side of the town hall (it stands in humble contrast to the large monument at Torgau, Germany, where the U.S. and Soviets met).

Few Canadians venture to Wismar to see the city where Canadian paratroopers met the Red Army, likely because many Canadians don’t even know about the encounter.

Colonel Charles
P. Stacey wrote in his book, The Victory Campaign, “It was fitting that the first Canadian unit to fight in Normandy should also be the Canadian unit to penetrate deepest into Germany.” 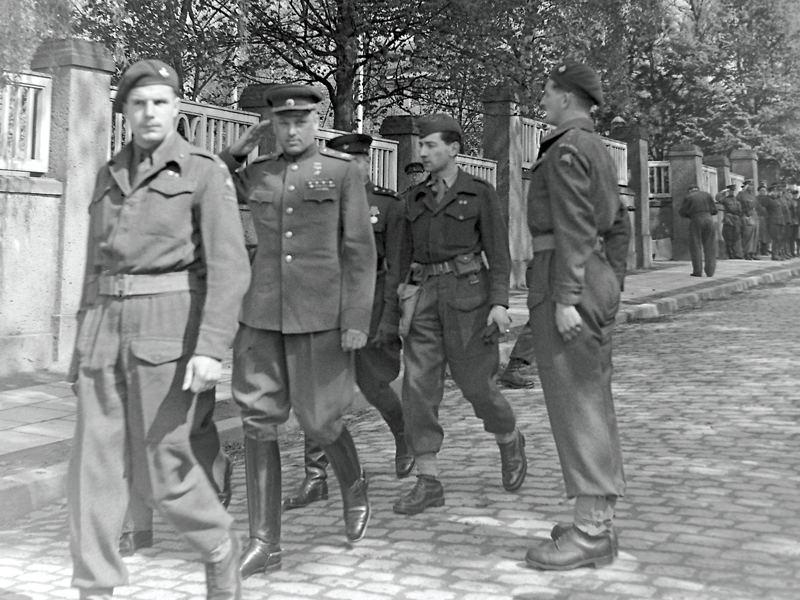 once the field headquarters of the 1st Canadian Parachute Battalion; Marshal Rokossovsky (second from left) and comrades walk along Dr.-Unruh-Straße near the British field HQ
LAC

PrevPrevious ArticleHMCS Uganda: the ship that voted its way home
Next ArticleOn this date: May 2022Next