Home » Military History » Military Milestones » Allies fight the weather, terrain and the Japanese in a battle for Pacific islands 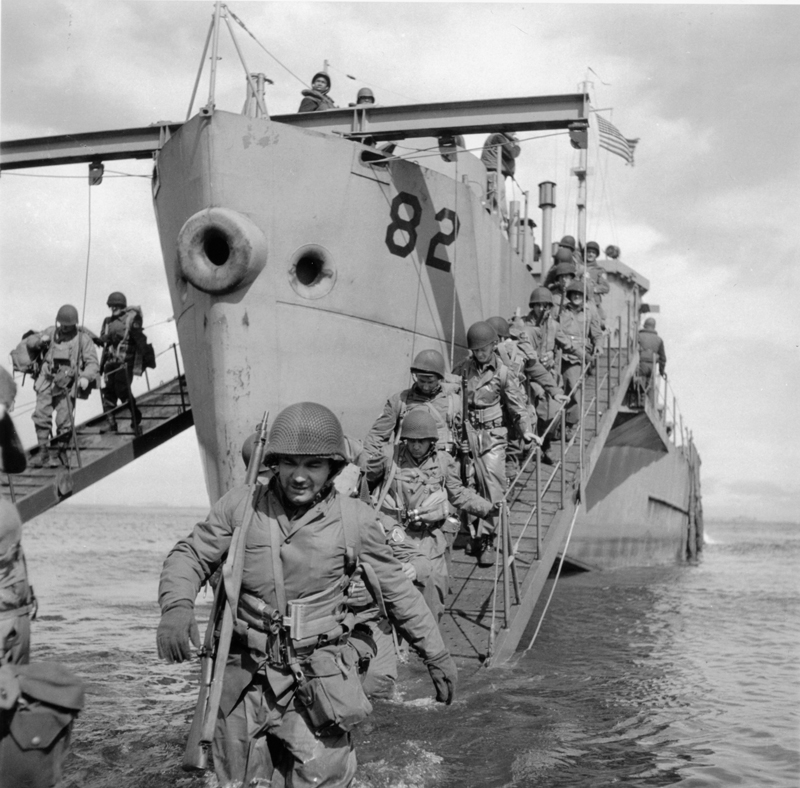 Canadian troops disembark in Alaska’s Aleutian Islands in the fall of 1943.
LAC-163409
Many today may not realize it or remember, but North America was invaded during the Second World War.

Six months after the attack on the U.S. fleet in Pearl Harbor, Hawaii, the Japanese set up shop in Alaska’s Aleutian Islands, which stretch like a long tail from the state’s coast 1,800 kilometres southwest into the Pacific Ocean.

The incursion on North America began June 3, 1942, with bombing of the U.S. naval base at Dutch Harbor on Unalaska Island.

About half the Japanese planes lost their way or crashed before the offensive, but 17 appeared over the base just before 6 a.m. looking for targets to destroy. They were met by anti-aircraft fire and unexpectedly, a short time later, U.S. fighters from the Fort Glenn Army U.S. airfield on Umnak, about 100 kilometres away.

The Japanese hastily dropped their bombs and beat it back to their aircraft carriers.

They returned the next day to finish the job. By the time the Japanese were chased off, they had hit the oil storage tanks, a hospital and damaged a barracks ship. U.S. fighters gave chase and attempted to sink the carriers, but lost the vessels when heavy weather set in.

The U.S. and Canada worried Japan could launch air attacks on major West Coast cities from the islands.

The Japanese might “get a very considerable foothold on parts of Alaska and even B.C.,” worried Prime Minister Mackenzie King.

There is still, however, debate about Japanese intentions. Was the invasion to establish airfields for bombing attacks on U.S. and Canadian mainland cities? Or to provide a base for a future mainland invasion? Maybe it was to prevent the Americans from using the Aleutians as a staging area for an invasion of Japan? Or simply a diversion to draw resources away from the Battle of Midway, which started June 4?

Whatever its motivation, Japan invaded Kiska Island on June 6, 1942, and Attu Island the next day. 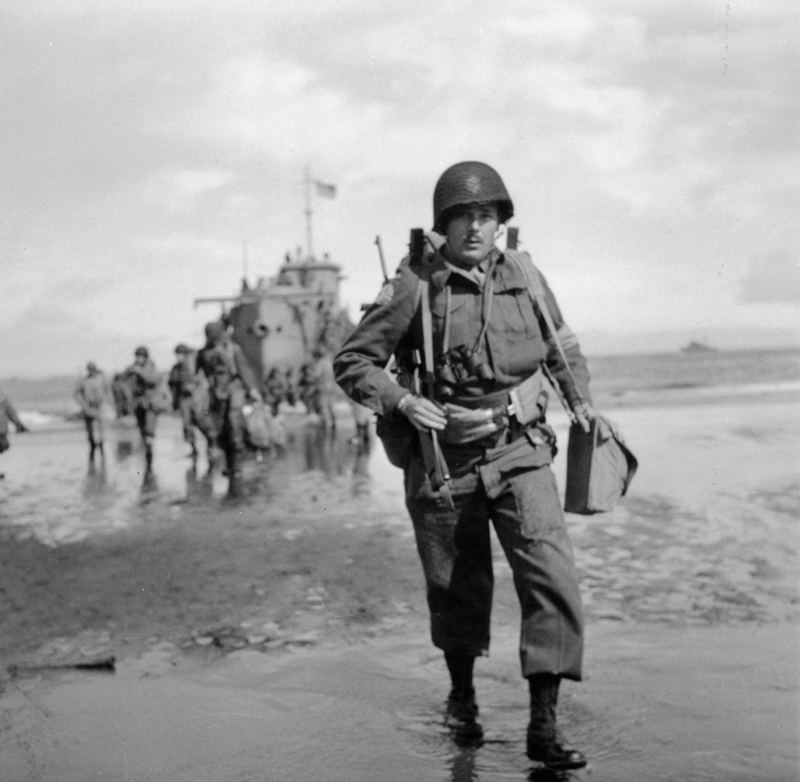 Canadian troops helped take back Alaska’s Aleutian Islands from the Japanese in the fall of 1943.
PA-163408

Confident in superior numbers, the U.S. expected it would take only a few days to dislodge the Japanese. They had not expected to be battling terrain and bad weather as well.

Considered remote today, Attu and Kiska seemed forbidding 70 years ago. The Aleutian archipelago’s 14 large islands, nearly five dozen smaller ones and many islets, separate the icy Bearing Sea from the Pacific. The islands are volcanic, part of the chain of volcanoes known as the Ring of Fire; some islands have active volcanos.

The weather in the region can be fierce. The sea is pocked by shoals. The land is unwelcoming, buffeted by high winds, persistently pelted by rain and snow and often concealed or partly covered by fog. Shorelines abruptly shoot up to steep mountains and what isn’t rock is covered by muskeg and mud.

In short, the Allies would need some planning before the islands could be reclaimed.

It was no easy life for the Japanese invaders, either. While they had been supported by the Japanese navy, in early 1943 the U.S. set up a blockade that choked off supplies.

Near the end of March 1943, Japanese supply ships were intercepted by U.S. patrols. The Battle of the Komandorski Islands ensued. U.S. ships suffered heavy damage during the fighting, but the Japanese disengaged after several hours, despite having superior numbers. They had run low on ammunition and fuel and were afraid U.S. bombers would find them.

Supplies to Japanese garrisons on Attu and Kiska had to be delivered by submarine. Belts grew tighter.

In late spring, the Japanese garrison on Attu was bombed and shelled by U.S. aircraft and ships, followed by the landing of 11,000 troops on May 11.

Confident in superior numbers, the U.S. expected it would take only a few days to dislodge the Japanese. They had not expected to be battling terrain and bad weather as well.

With no reinforcements, starving and practically out of ammunition, the Japanese staged a last charge. 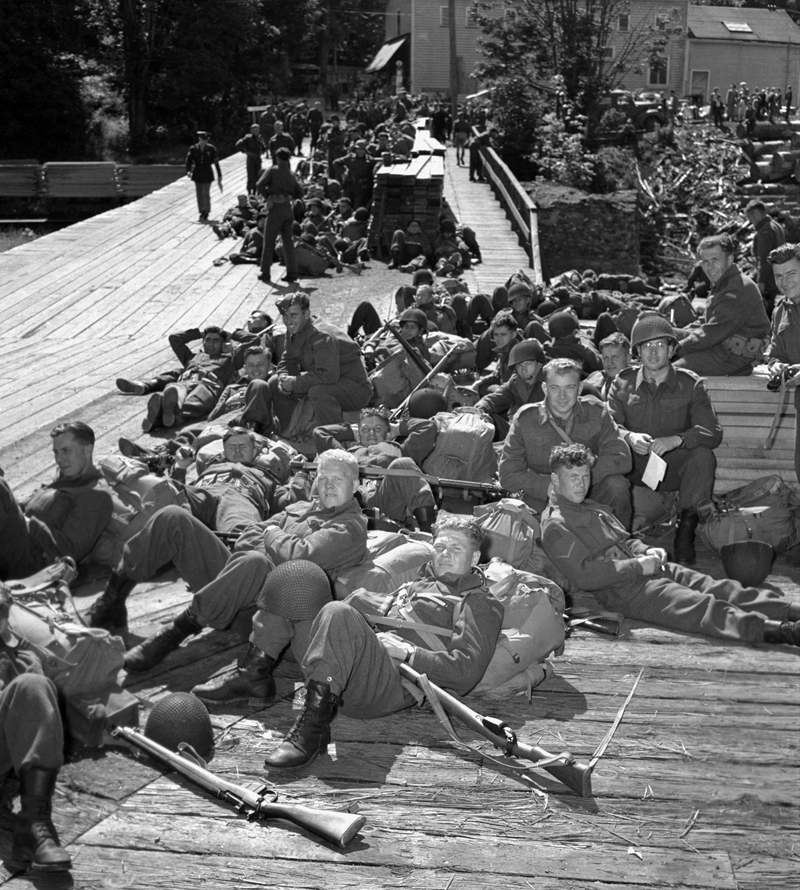 Infantrymen of Le Régiment de Hull wait to board ships taking part in Operation COTTAGE, the invasion of Kiska in the Aleutian Islands, in July 1943.
PA-168356
The Japanese withdrew to the heights to plot ambushes, leaving the Americans to tend to their frostbite, figure out how to move over muskeg and to deal with Japanese booby traps.

With no reinforcements, starving and practically out of ammunition, the Japanese staged a last charge, some holding grenades and pulling the pins as they met U.S. troops.

The Allies came better prepared to take Kiska on August 15, landing a force of nearly 35,000, including 5,300 Canadians, in the snow.

Along for the ride were 2,000 of the 1st Special Service Force, the U.S.-Canadian commando unit known as the Devil’s Brigade. They were divided into three regiments, one to storm ashore, a second to parachute where needed and the third in reserve for the second day of attack.

It was all rather anticlimactic. The Japanese had spirited their forces away under the cover of fog.

“We invaded the island without any resistance,” recalled Lucien Desjardins of the Royal Canadian Corps of Signals. “We knew the Japanese had left the island in haste early in the morning while fog covered the island. (Maybe the Japanese knew that French Canadian soldiers were coming and they did not wish to get into combat with us!)”

There was no battle, but retaking the island was not a bloodless affair. “The night of the invasion several soldiers shot themselves by mistake,” recalled Desjardin.