A lifetime of service 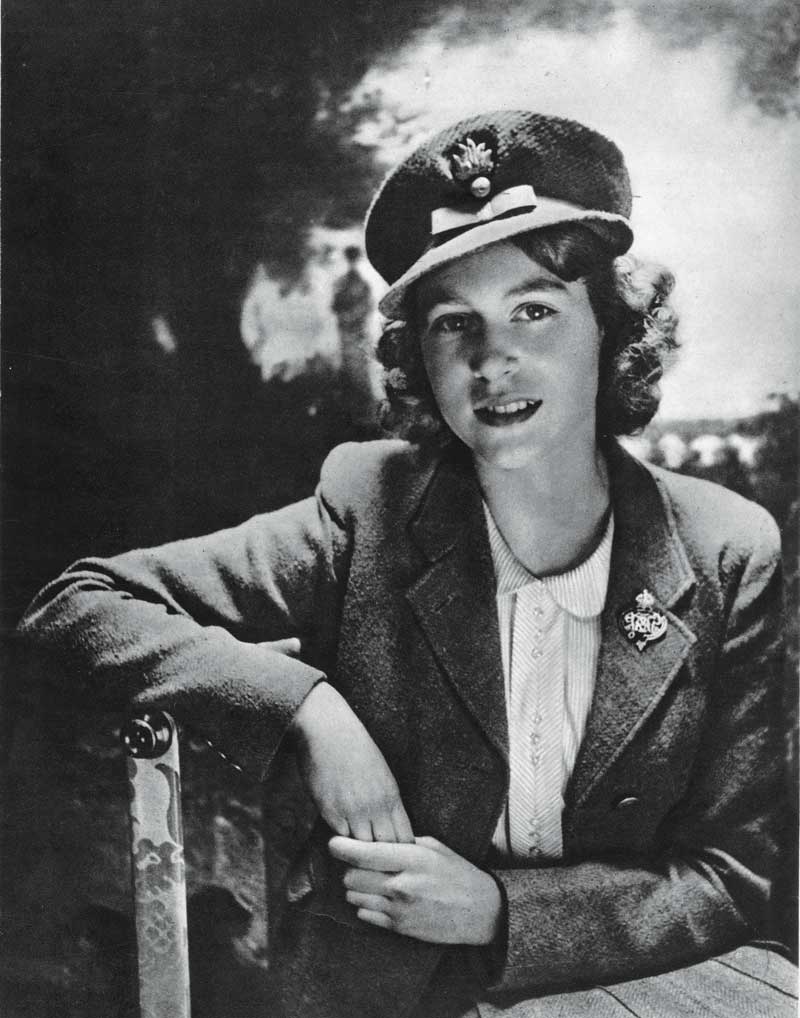 Princess Elizabeth was conferred the title of Honorary Colonel of the Grenadier Guards on her 16th birthday in 1942. Later that year, she posed wearing the famous regiment’s insignia.
Smith Archive/Alamy/2GC3XJ1

“For many of us, we have only ever known one Queen,” said Governor General Mary Simon after the death of Queen Elizabeth II at Balmoral Castle in Scotland on Sept. 8. She had been the Queen of Canada for 70 years.

“Queen Elizabeth II was a constant presence in our lives,” said Prime Minister Justin Trudeau. “Time and again, Her Majesty marked Canada’s modern history. Over the course of 70 years and 23 royal tours, [she] saw this country from coast to coast to coast and was there for our major, historical milestones.”

Indeed, the Queen marked many notable occasions in Canada, including: opening the St. Lawrence Seaway in 1959; commemorating the 100th anniversaries in 1964 of the Charlottetown and Quebec City conferences that paved the way for Confederation; Canada’s centennial and Expo 67 in Montreal in 1967; the 100th anniversaries of Manitoba and the Northwest Territories in 1970; the centennial of the Royal Canadian Mounted Police in 1973; the opening of the 1976 Olympics in Montreal; the opening of the Commonwealth Games in Edmonton in 1978; the proclamation of the Constitution Act in 1982; Canada’s 125th anniversary and the 40th anniversary of her reign in 1992; and the centennial of the Royal Canadian Navy in 2010.

Canada held a special place for the Queen. On her last visit in 2010, she told a crowd waiting for her in Halifax in the pouring rain: “My mother once said that this country felt like a home away from home for the Queen of Canada. It’s very good to be home.” 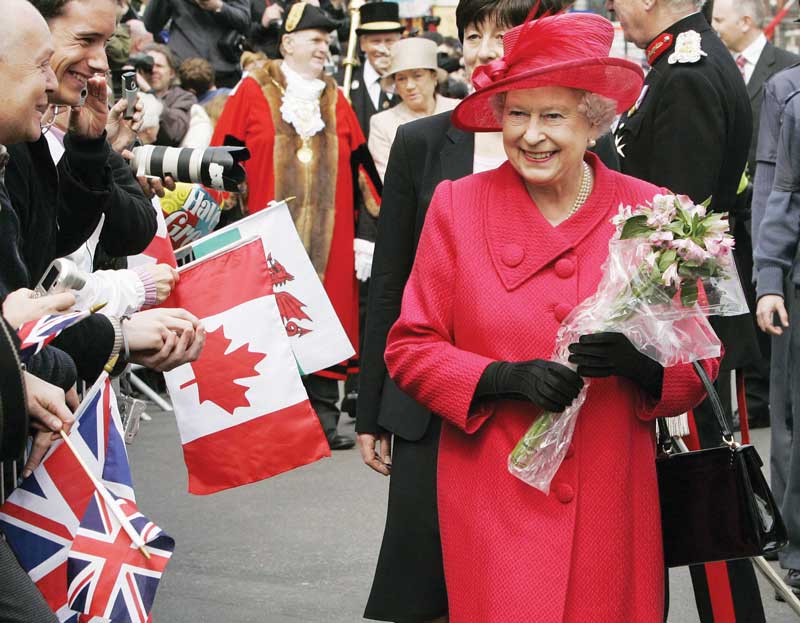 As Queen in 2006, Her Majesty greets well-wishers during her 80th birthday celebration in Windsor, U.K.
Kirsty Wigglesworth/Canadian Press/AP

Canadians got to know the young princess early. Elizabeth came to the fore of public attention on Dec. 10, 1936, when her father, the former Duke of York, became king following the abdication of his older brother Edward VIII. She was 10 years old.

At the time of her death, Queen Elizabeth II was the only remaining person in British public service who had served in the Second World War, noted former British prime minister Boris Johnson. During the darkest period of the war for Britain—the Blitz during the Battle of Britain—she and her sister, Princess Margaret, gave a radio broadcast addressing the children who had to be evacuated from the cities. It raised the morale of British subjects. That was Oct. 13, 1940. Elizabeth was 14.

As the war progressed, she joined the Auxiliary Territorial Service, training to be a mechanic and driver.

Canadians got their first glimpse of the future Queen, then the Duchess of Edinburgh, when she and her husband Prince Philip visited in 1951. She would return 22 times, but her next visit was as Queen Elizabeth II, the Queen of Canada.

Both she and Prince Philip took an active interest in Canada’s military. As Canada’s head of state, she was officially the head of the Canadian Armed Forces, and the title Commander-in-Chief was bestowed on her viceregal representative, the governor general.

At the time of her death, she was the only remaining person in British public service who had served in the Second World War

She also served as Air Commodore-in-Chief for the Royal Canadian Air Force. Her relationship with the RCAF goes back to her coronation on June 2, 1953. The RCAF, the Royal Air Force, the CBC and the BBC worked together, filming the occasion and presenting it in both Great Britain and Canada within 11 hours. Cannisters of film were flown by the RCAF across the Atlantic Ocean, allowing the CBC to broadcast the event 27 minutes before anyone in the United States saw it. 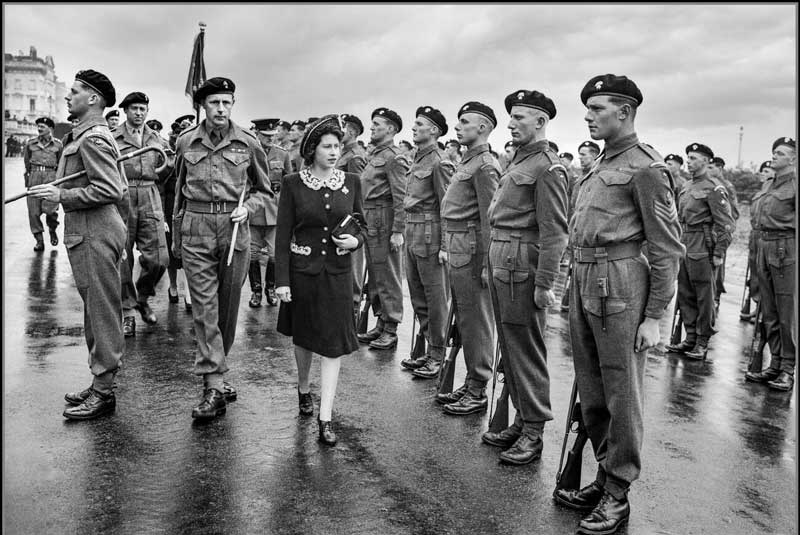 Princess Elizabeth inspects an honour guard of the Grenadiers on May 17, 1944, in advance of D-Day . Recording their first radio broadcast in October 1940.
Malindine/Shawshots/Alamy/2JTYY6G

The Queen had always also taken a great interest in veterans and their needs—they always had their own place in most public gatherings to see her. She would usually make it a point to personally greet some of them. For many years, Prince Philip served as the grand president of the British Commonwealth Ex-Services League, later the Royal Commonwealth Ex-Services League, which provides financial assistance to Commonwealth veterans from outside Britain who served in the military, then returned to their impoverished homelands. 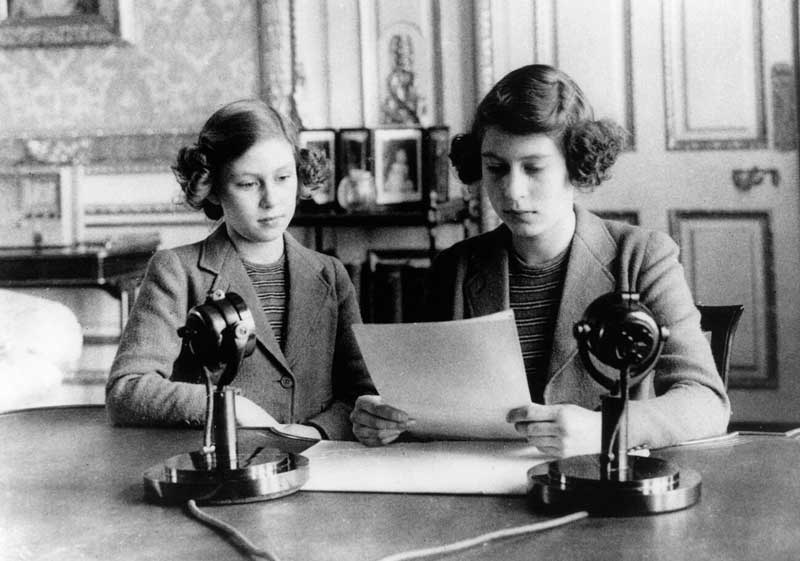 “We will never forget her generous patronage and what her support has brought to our organization,” said Royal Canadian Legion Dominion President Bruce Julian.

In 1961, the prefix “royal” was added to the organization’s name with the Queen’s consent. Julian said that with the accession of King Charles III, the Legion’s ties to the monarchy and the Commonwealth will remain strong and will be embodied in Governor General Simon, the organization’s current viceregal patron.

The Queen also took a great interest in the Royal Canadian Mounted Police, where she served first as Honorary Commissioner and then, in 2012, became Commissioner-in-Chief. The RCMP gave the Queen eight horses over the years. Most were born in the RCMP stables in Saskatchewan and trained in Ottawa. The first, named Burmese, became her favourite and she often rode it during the annual Trooping of the Colour parade in London.

During the parade in 1981, a lone shooter fired six shots—proved later to be blanks—at the Queen. The attack caused the Horse Guards she was riding with to close ranks around her until the culprit was apprehended. Burmese mistook the action and, fearing for the safety of its master, charged at the guards. An excellent equestrian, the Queen soon had Burmese calmed down. 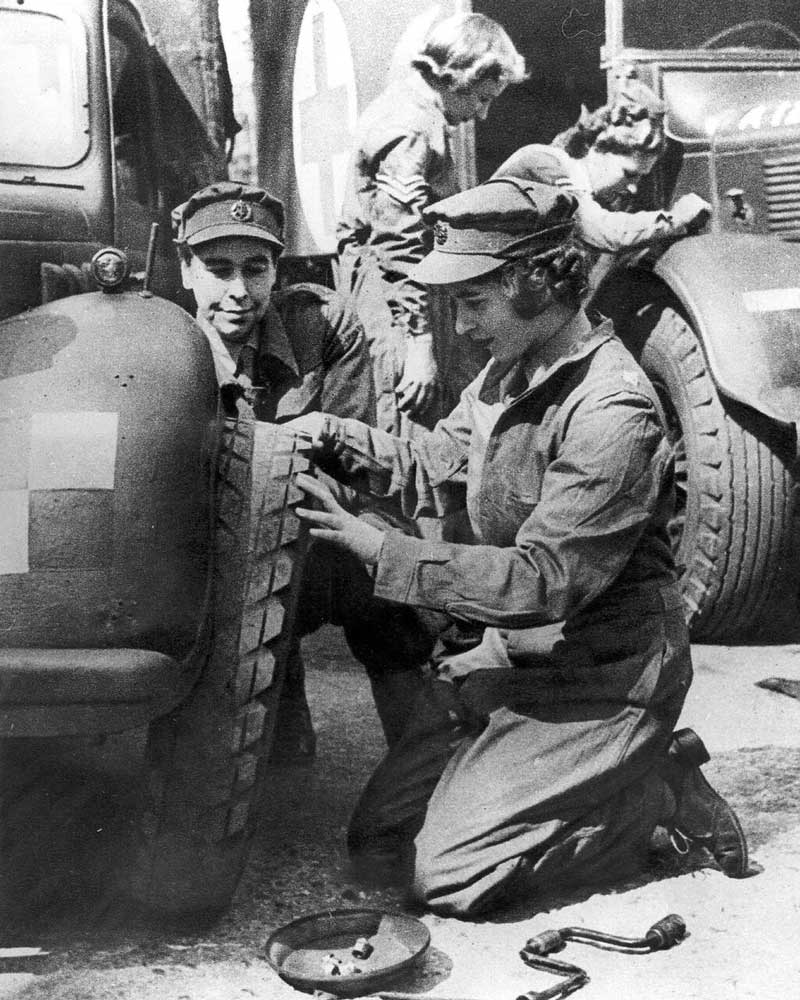 During the Second World War, the princess trained to be a mechanic and driver with the Auxiliary Territorial Service.
Smith Archive/Alamy/2GC322J

Later, the RCMP also presented her with a horse named Centennial. In 1992, the Queen was again in Ottawa to unveil a statue on the lawn of Parliament Hill of herself riding Centennial. The statue was created by West Coast artist Jack Harman. It has since been moved to outside Rideau Hall as a temporary measure while extensive restoration work is done on the Parliament Buildings.

During her 2010 visit to Canada, she and Prince Philip inspected Canada’s warships as part of an International Fleet Review to mark the Royal Canadian Navy’s centennial. It is a royal tradition, dating back to the end of the Seven Years’ War. 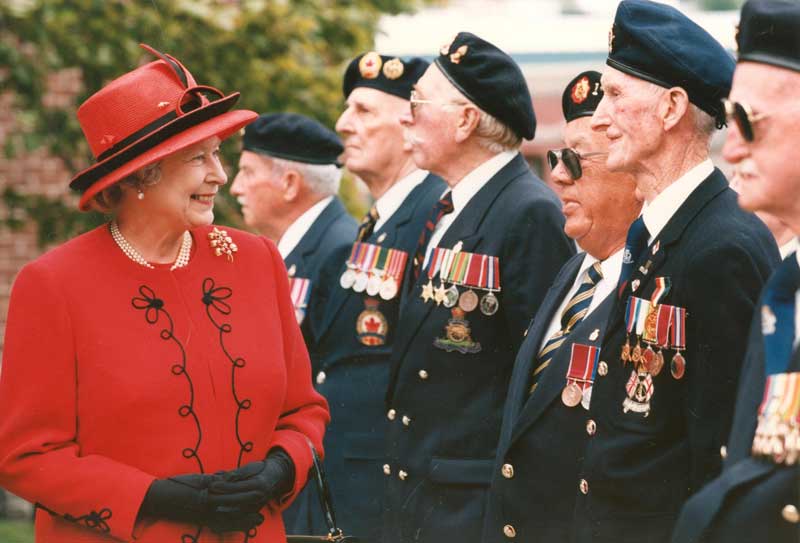 The Queen greets Canadian veterans in Ottawa in 1992.
Content courtesy of the Department of Canadian Heritage/© All rights reserved

In a constant drizzle, she and Philip boarded HMCS St. John’s, one of Canada’s frigates, to cruise Halifax Harbour visiting many Canadian navy ships, which had been joined by several others from allied countries. Among them were the Royal Navy’s aircraft carrier Arc Royal, the United States navy’s Wasp, an amphibious assault ship, and USS Gettysburg, a guided missile cruiser. Other vessels from Brazil, Denmark, France, Germany and the Netherlands were also on hand.

With flags and pennants flying, the crews in each ship lined their decks, shouting three cheers for the Queen. At the end of the inspection, HMCS Athabaskan (3rd) gave a 21-gun salute.

Canadians had no way of knowing it would be her last trip to Canada as age and health required her to abandon all overseas travel. Still, she continued a busy schedule of appearances and meetings until the week she died.

During pandemic related lockdowns in 2020, she reassured members of the Commonwealth everywhere. Most notable was her television address on April 5, 2020, which was seen by nearly 24 million viewers around the world. At its conclusion, she noted: “We should take comfort that while we may have more still to endure, better days will return; we will be with our friends again; we will be with our families again; we will meet again.”

The last phrase is from the chorus of a wartime song popularly sung by Vera Lynn that became a favourite among those serving in the Second World War and their loved ones. 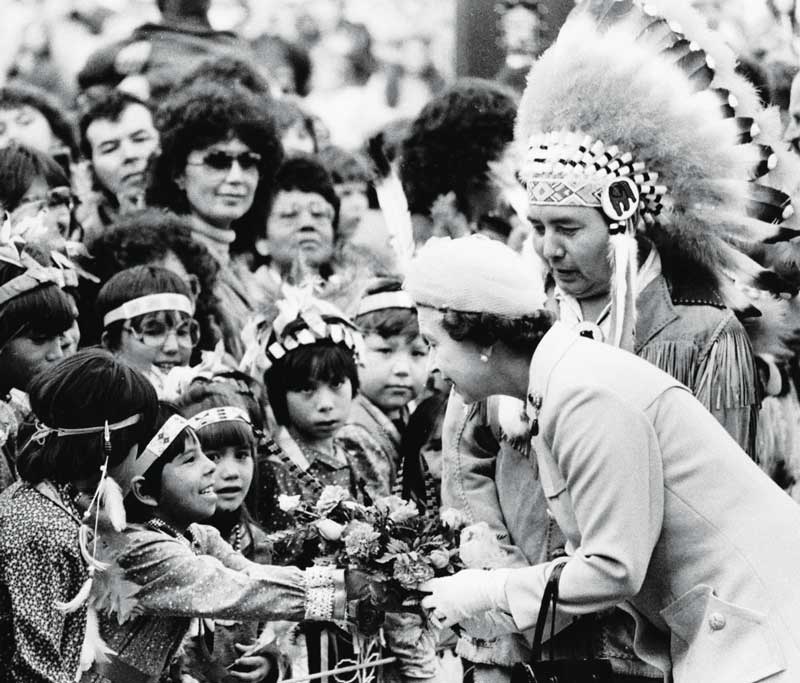 First Nations children in Brantford, Ont., in 1984.
Reproduced with the permission of the Minister of Canadian Heritage, 2022

Though she has not been in Canada since 2010, she made sure she was represented in the country during important occasions. This past May, Prince Charles, now king, and his wife, the Duchess of Cornwall, toured Canada to celebrate the Queen’s Platinum Jubilee, her 70th year as monarch.

In those seven decades, she brought a monarchy—filled with traditions that are centuries old—into the 21st century. The Queen was quick to adapt to new media, from radio and television to social media, including Twitter, Instagram and Facebook. 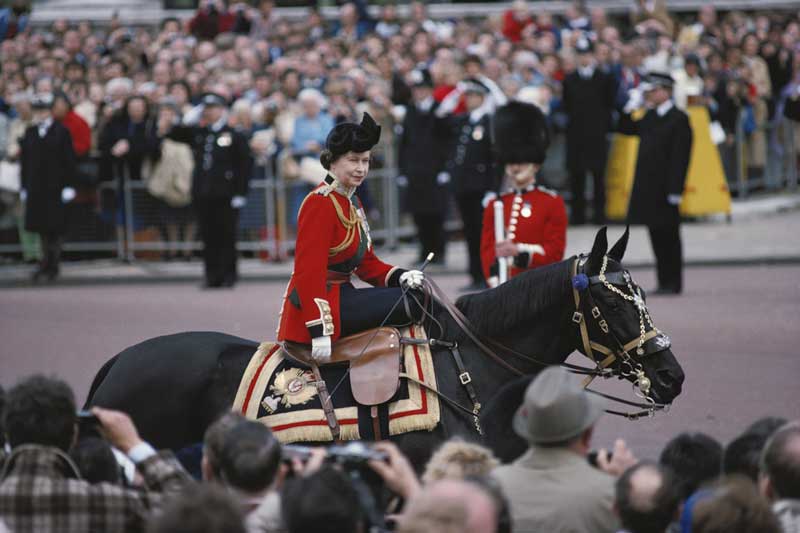 Her Majesty rides Burmese, a horse gifted to her by the RCMP, during the Trooping the Colour ceremony in London in 1979.
Tim Graham Photo Library/Getty Images

“She made sacrifices for duty,” said her son, King Charles, during his inaugural address as sovereign. “In her life of service we saw that abiding love of tradition, together with that fearless embrace of progress, which makes us great as nations.” 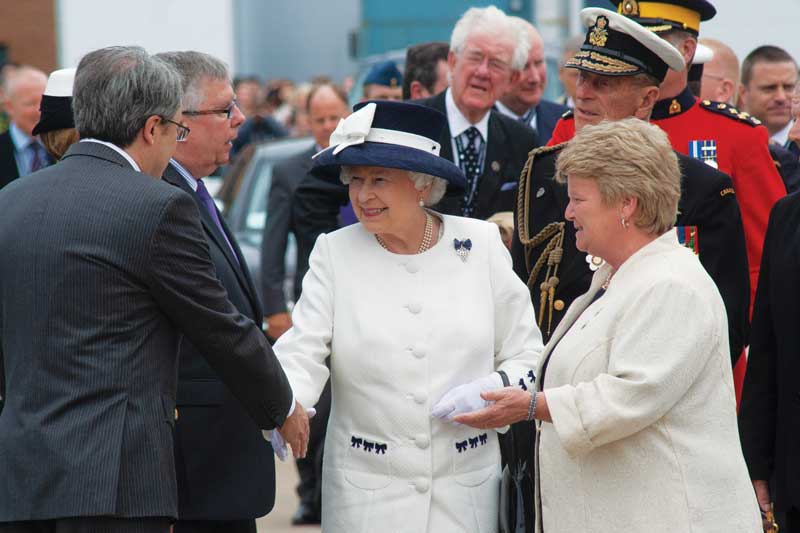