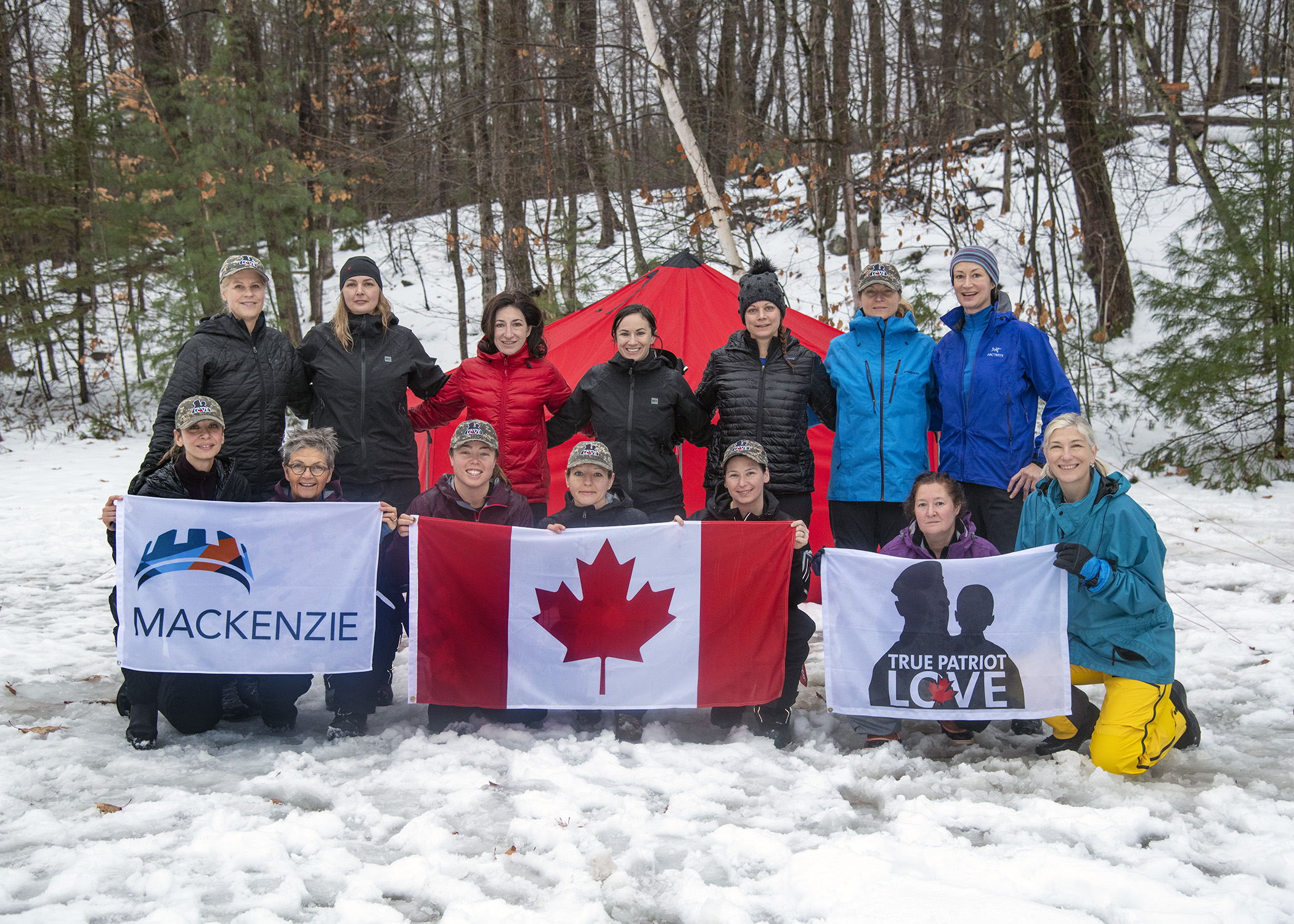 Participants in True Patriot Love’s 2019 expedition at a recent training camp. Next month’s Baffin Island trek will be the organization’s first all-female expedition. It aims to raise $1 million for women’s programs supported by the charity.
TRUE PATRIOT LOVE
As vice-president of training, learning and development at Mackenzie Investments, Libby McCready spends her days in meetings, on the phone, corralling e-mails and delivering presentations.

If all goes as planned, in a month’s time she will be completing a 100-kilometre trek across Baffin Island in Nunavut with 24 other women, seven of them currently serving in Canada’s military. Four guides, two Inuit, a military doctor and a photographer will complete the lineup.

The expedition aims to raise $1 million for women’s programs supported by True Patriot Love, a charity devoted to bridging gaps in government funding for serving military, veterans and their families as well as backing related health research.

The 58-year-old executive is the oldest of 12 business mentors on the week-long snowshoe trek. She will be one of two civilians mentoring, and mentored by, Military Police Sergeant Nicole Laidlaw, an Afghanistan veteran based in Borden, Ont.

“It’s an adventure,” says McCready. “I’ve never done anything like this before. 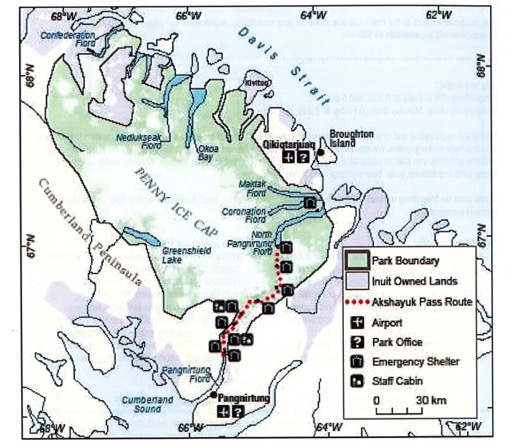 The 2019 expedition leaves North Pangnirtung Fiord on April 4, travels the Akshayuk Pass, descends the frozen Weasel River and passes Windy Lake before crossing the Arctic Circle. It is to arrive at Overlord Peak on April 10. Inuit guides will take the terkkers by snowmobile to Pangnirtung. They return to Ottawa on April 14.
COURTESY TRUE PATRIOT LOVE
“I’m an older person in a very young sales organization, so I never would have assumed that anything like this would have been available to me. But, being an all-women’s expedition, it became available and I thought, ‘why not?’”

McCready has been working with a trainer. On weekends, she hauls a tire-laden sled around her cottage in Gravenhurst, Ont., declining offers from locals for a ride to the dump. She is in the best shape she has ever been, despite the aches and pains. “A lot of the training is really about getting myself stable and strong and flexible.” 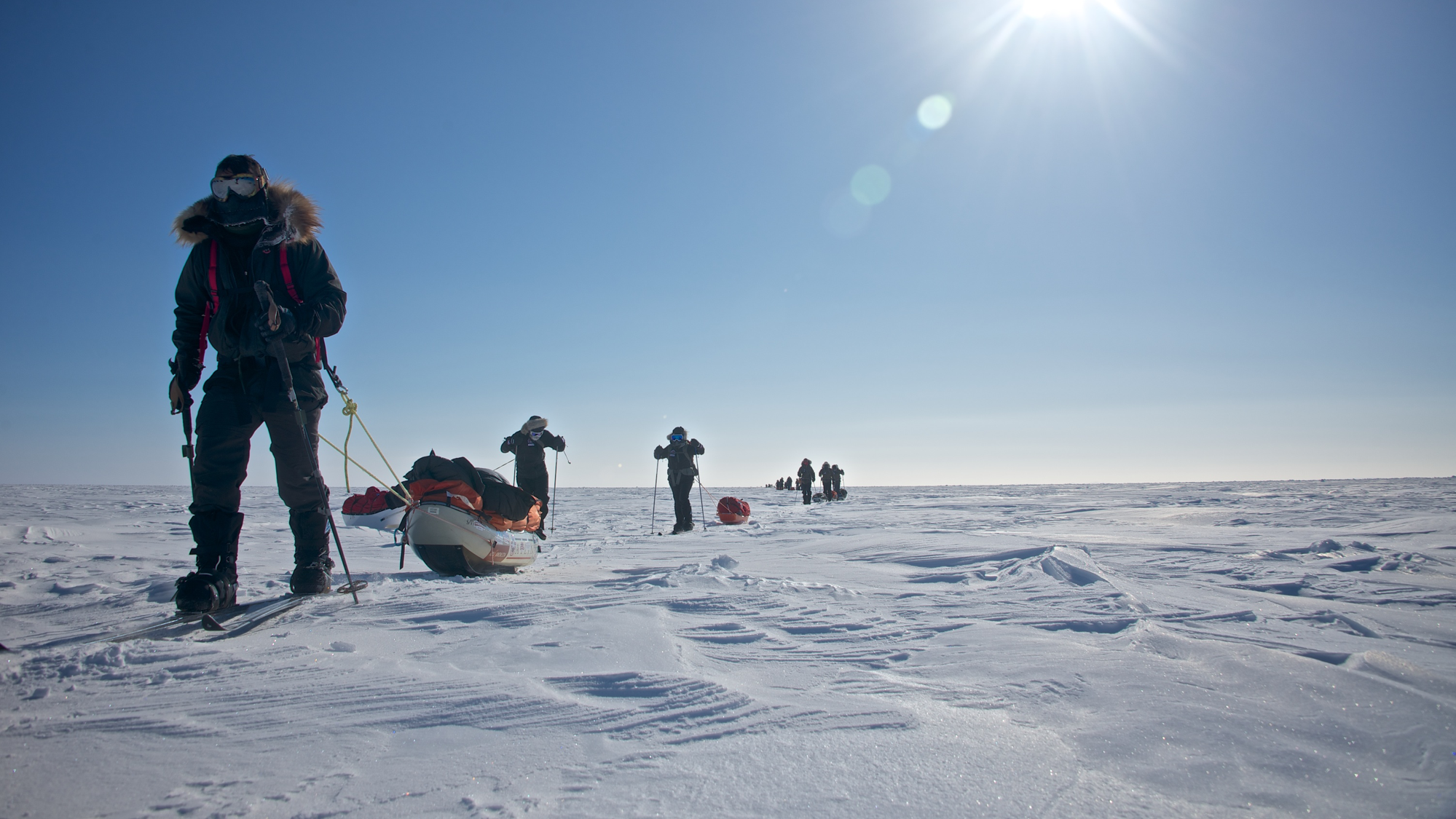 Participants in the 2014 trek to the north magnetic pole haul their sleds laden with supplies across the frozen landscape of the Canadian Arctic. This year’s all-woman expedition will travel 100 kilometres across Baffin Island.
COURTESY TRUE PATRIOT LOVE
The group has had three training camps—one of them hosted by McCready—and is already forging strong ties. True Patriot Love has launched numerous expeditions worldwide, always mixed-gender.

“We saw this as an opportunity to really shine a light on some of the unique challenges that women who serve face,” said Laura Hearn, a team mentor and the organization’s vice-president of corporate partnerships, marketing and events.

“We also had this strong contingent of civilian women who wanted to do something with other women and really wanted to support them in a unique way,” she said.

“I think having an all-women group allows the team to bond in a way that may be different and tell that story of the challenges that not only women who serve face, but also women who are trying to manage successful civilian careers in balance with family and travel.”

All the military team members have been injured either physically or mentally as a result of their service. Laidlaw’s 13-year career included a seven-month tour in Afghanistan in 2008-09, where she lived outside the wire, conducted regular foot patrols and trained Afghan National Police recruits.

She suffered a compressed disk and partially torn Achilles tendon in the course of her service but says the nature of the expedition—pulling a sled—will exact less of a toll on her back than a rucksack.

She says she looks forward to “building valuable relationships with strong women” on the expedition. The military, she suggests, is still very much a man’s world despite efforts to boost the number of women in the services.

“I personally love [the military life] and the people I work with,” said Laidlaw. “They’ve always referred to me as ‘one of the guys’ and, though I don’t mind that, I also want to be seen as a strong female.” 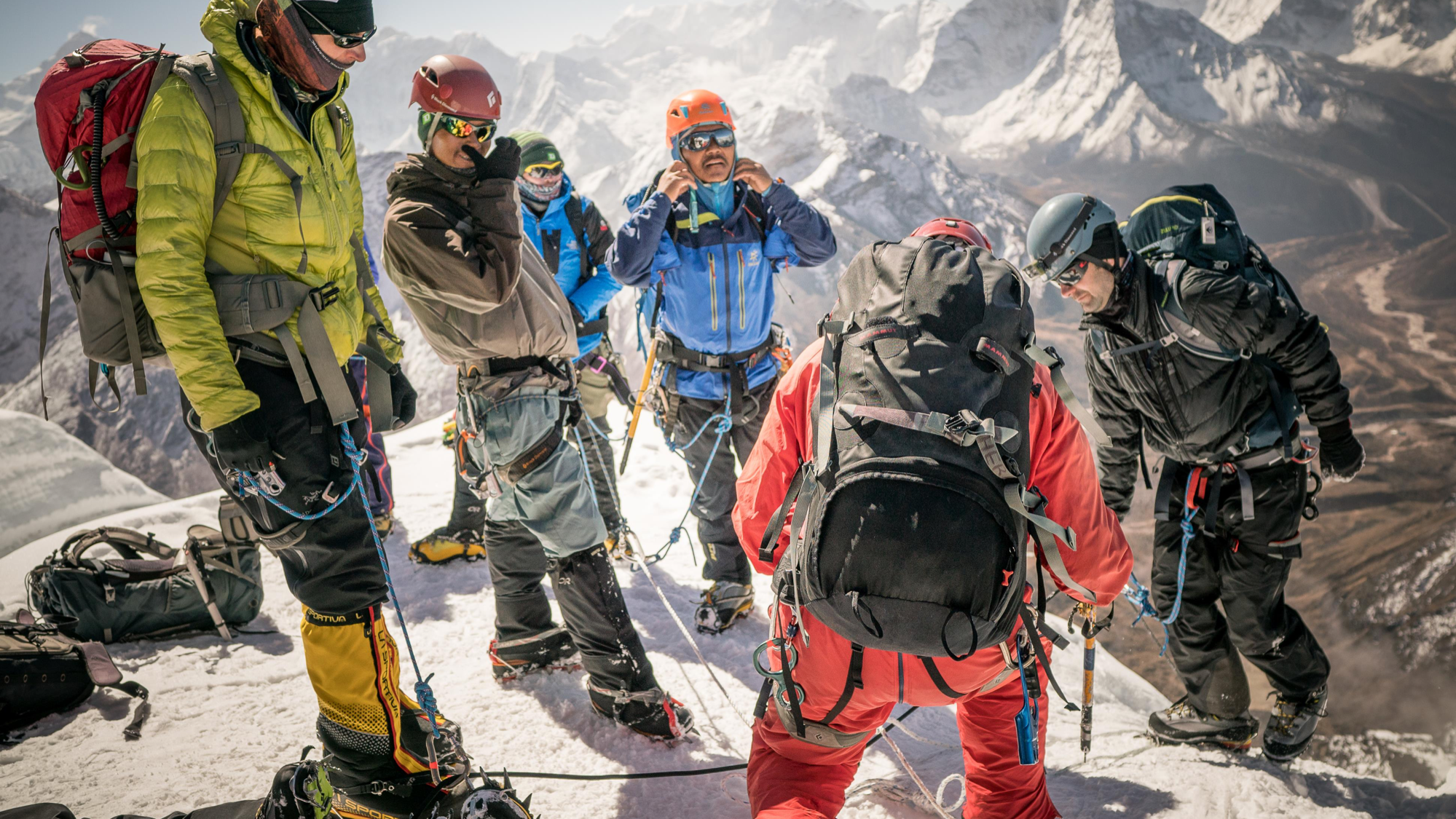 In 2018, a 17-member expedition sponsored by True Patriot Love successfully trekked 17,600 feet up to Everest Base Camp in Nepal, with some going on to summit the nearby 20,000-foot peak of Lobuche East.
COURTESY TRUE PATRIOT LOVE
Corporate mentors are committed to fundraise between $50,000 and $100,000 each. Military team members must come up with $2,500 in donations.

Laidlaw, a 33-year-old wife and mother of three, did that on social media with family and friends in less than a week, so she doubled her commitment to $5,000 and, by early March, had already raised $4,200 of it.

They are to set out from North Pangnirtung Fiord on April 4, travel southward through the Akshayuk Pass, descend the frozen Weasel River and pass Windy Lake before crossing the Arctic Circle. They are to arrive at Overlord Peak on April 10. Inuit guides will take them by snowmobile to Pangnirtung, where they will have a celebratory dinner on April 11, then visit with the area’s Canadian Rangers. They return to Ottawa on April 14. 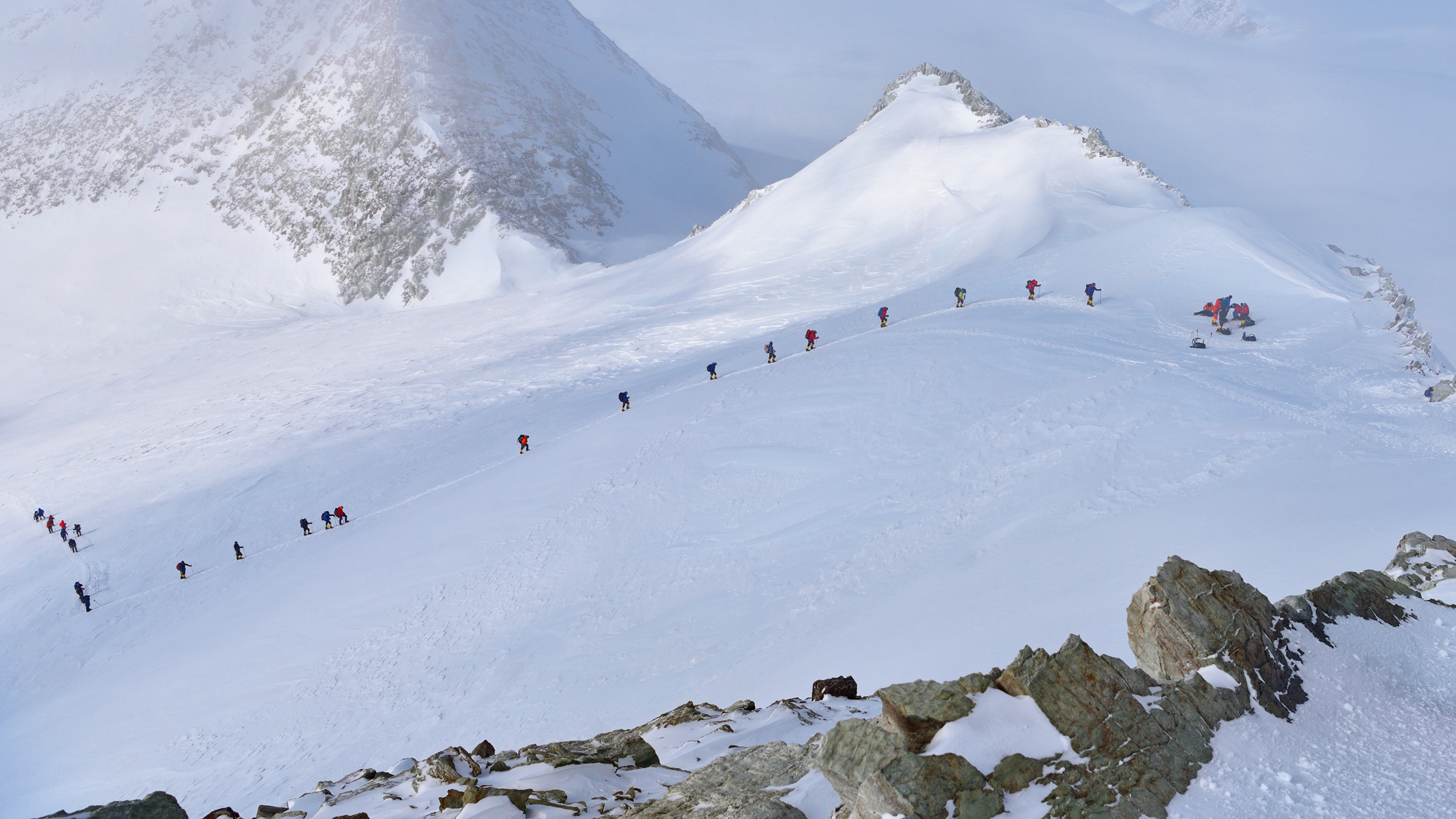 In 2016, a TPL expedition trekked to the top of Antarctica’s highest peak, the 4,892-metre Vinson Massif.
COURTESY TRUE PATRIOT LOVE
The group will average about 15 kilometres a day; their longest single-day trek will run about 20 kilometres. They will be pitching tents for each cold-night’s sleep.

“Together, we can really accomplish anything,” said Laidlaw. “We’re strong, we have the ability, and one thing I learned from the military [is] mission success. There is no failing. Together, we will conquer Baffin.”

True Patriot Love has provided $25 million for innovative research and support to 750 community-based programs across the country since 2009.