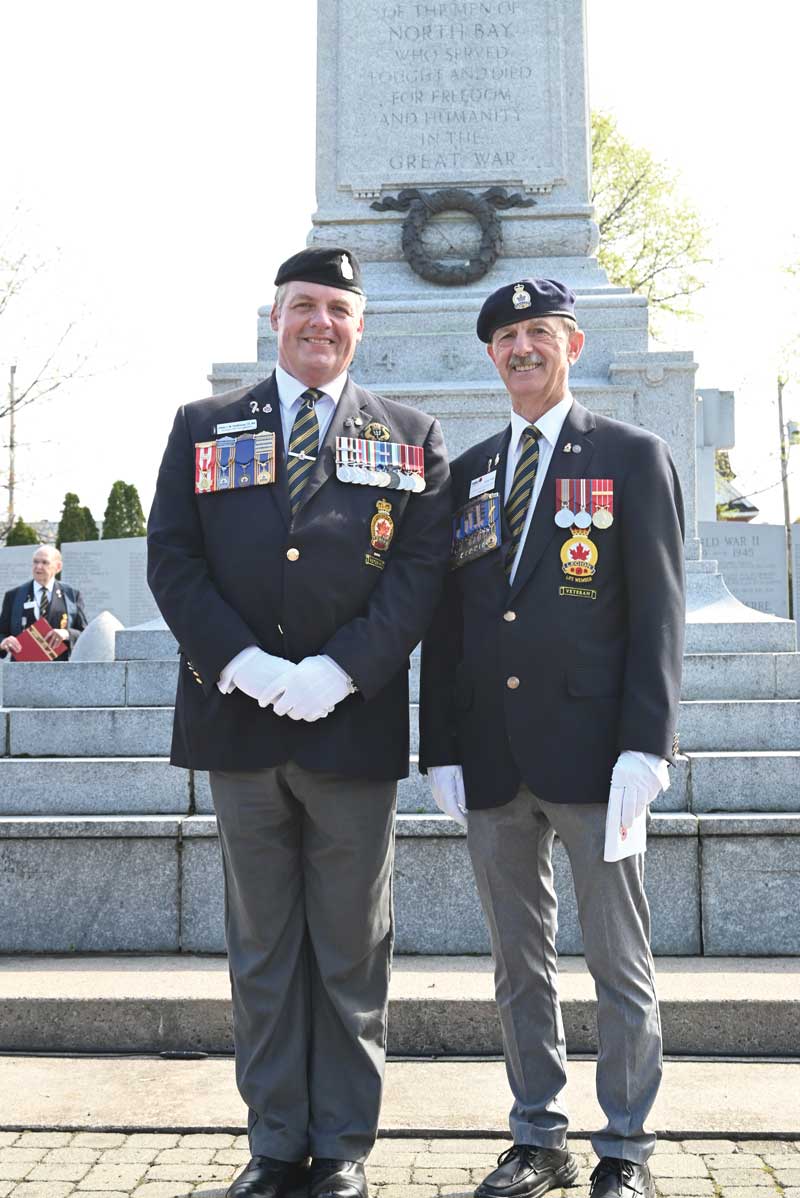 Delegates then moved to Nipissing University’s Robert J. Surtees Student Athletic Centre, site of the convention, for the opening ceremonies. Peter Beaucage of the Nipissing First Nation conducted a cleansing ceremony and Chairman Ron Goebel welcomed delegates, who then heard from guest speaker Jolette of 22 Wing. The gathering then got down to its business agenda.

Pond reported on several highlights from his three-year tenure, which largely coincided with the COVID-19 pandemic. He emphasized the work of Ontario Command’s homeless veterans program, which has helped more than 1,000 individuals to date, as well as Operation Service Dog, which pairs specially trained four-legged friends with veterans in the province dealing with post-traumatic stress disorder (PTSD). Branches in Ontario donated $400,000 to the program in 2021.

“I feel so proud of the incredible job that our branches, our zones, our districts did, and how every single Legion member helped us get through COVID-19,” said Pond. “We’re not all the way through it yet, but my faith in The Royal Canadian Legion and our survival has been doubled because of your response to this challenge.”

In the Constitution and Laws Committee report, vice-chair Aubrey Callan presented a wide range of bylaw amendments, the vast majority of which were straightforward. One change, related to provincial command approval of branch clubhouse rules, however, generated much discussion. Many delegates expressed concerns about the rationale behind rejected branch policy documents. Pond ultimately promised the committee would look closely at the situation and fix it.

Terry Jacobs then presented both the Treasurer’s and the Ways and Means Committee reports. A reduction in expenses because of the close of normal operations connected to the pandemic allowed Ontario Command to reimburse two years of per capita branch fees equaling $11 per member per year, a total of more than $2 million. Jacobs noted that while the recent relaxing of pandemic restrictions has resulted in increased command activity, expenses remain below those budgeted. The Ways and Means Committee recommended no per capita increase over the next three years. 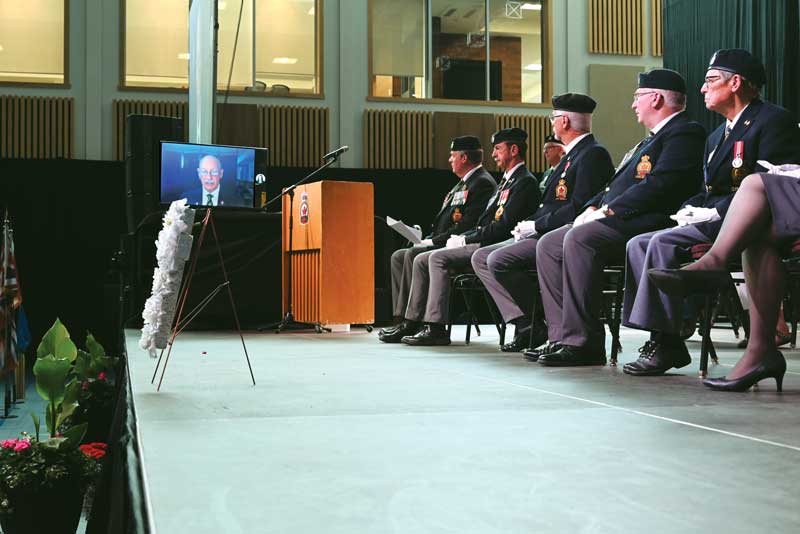 Pond presented the Membership Committee report on behalf of its chair Derek Moore, who was absent having had major surgery just days earlier. Membership in Ontario dropped by about 8,000 in 2021 to stand at 85,114. “This long-lasting COVID pandemic certainly didn’t help that situation,” wrote Moore in his report, “but I might add, not as badly as I thought it would.”

Indeed, there was good news presented on national numbers for 2022 at the conference: total membership was up nearly eight per cent, renewal rates had increased by 10 per cent year-over-year, and new or reinstated members had increased by 6,500 over 2021.

“This is the first time in over 30 years that we’re going to see growth in numbers,” said Pond.

The election for the honorary treasurer position pitted incumbent Terry Jacobs of Kanata Branch against his predecessor Ed Pigeau of Thessalon Branch, with the latter reclaiming the role. Ron Goebel of Carleton Place Branch was acclaimed for another term as chairman, while the vice-chair position was hotly contested, taking three ballots to ultimately re-elect Ron Crown of Grand Bend Branch over Eric Ross, Greg Kobold of Brighton Branch and Patricia Thompson-Perry of Pte. Joe Waters Branch in Milton.

Beyond election excitement, other highlights of the convention included: a speech by Phil Ralph, director of health services for Wounded Warriors Canada, which, in partnership with Ontario Command, oversees the Operation Service Dog program—“Let’s get some more dogs out there!” said Pond afterward, and branch representatives responded with nearly $100,000 in donations; an address by Veterans Ombudsperson Nishika Jardine; a primer by Rose McGuire on Ontario’s new Soldiers’ Aid Commission, which provides financial assistance to veterans in need (and their families) in the province; a pair of powerful presentations by Darren Reid, the Ontario representative in the Legion’s Operational Stress Injury Special Section, on veteran suicide, homelessness and related issues and programs—“I’m not looking for medals, I want hugs because it means they’re still here,” concluded Reid of his work with fellow vets. In total, branch donations to provincial programs totalled nearly $600,000. 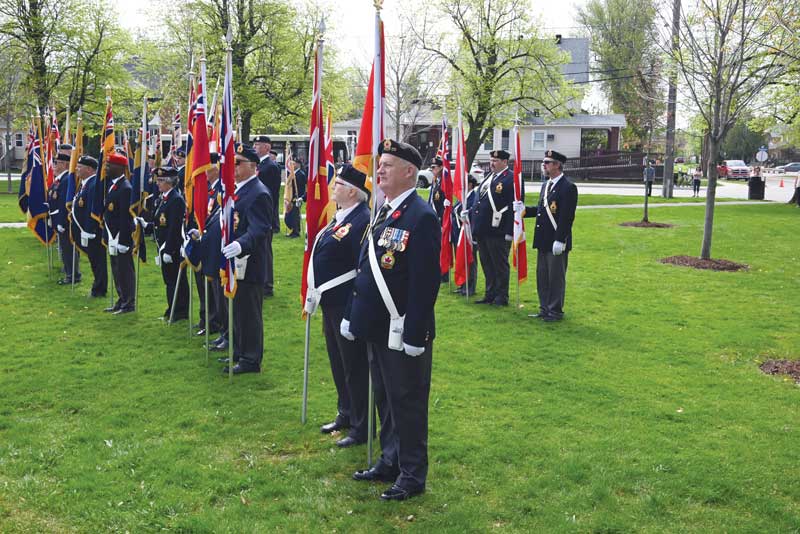 Meanwhile, Parkhouse brought updates from Dominion Command, notably declaring that advocating for a national volunteer strategy is a personal priority. He detailed the latest national membership numbers (noted above), and highlighted the forthcoming biodegradable lapel poppies and wreaths, and growth of the poster and literary contests. He noted, too, Dominion advocacy in dealing with sexual misconduct in the military, fighting to end veteran disability claim backlogs and supporting Afghan refugees. He summed up the work succinctly: “We touch so much in this country at the Legion.”

Following the installation of new officers, Goebel introduced a recorded video message from incoming President Moore. “It was a huge disappointment to my wife Patricia and I that we weren’t able to attend this very special Ontario Command provincial convention,” said Moore.

“A return to normal is around the corner. It is my desire to complete what the prior administration was unable to do due to the COVID-19 pandemic,” he continued. “Our theme for this convention is working together. I plan on encouraging that throughout this term, because without it we will not be able to reach our goals.”