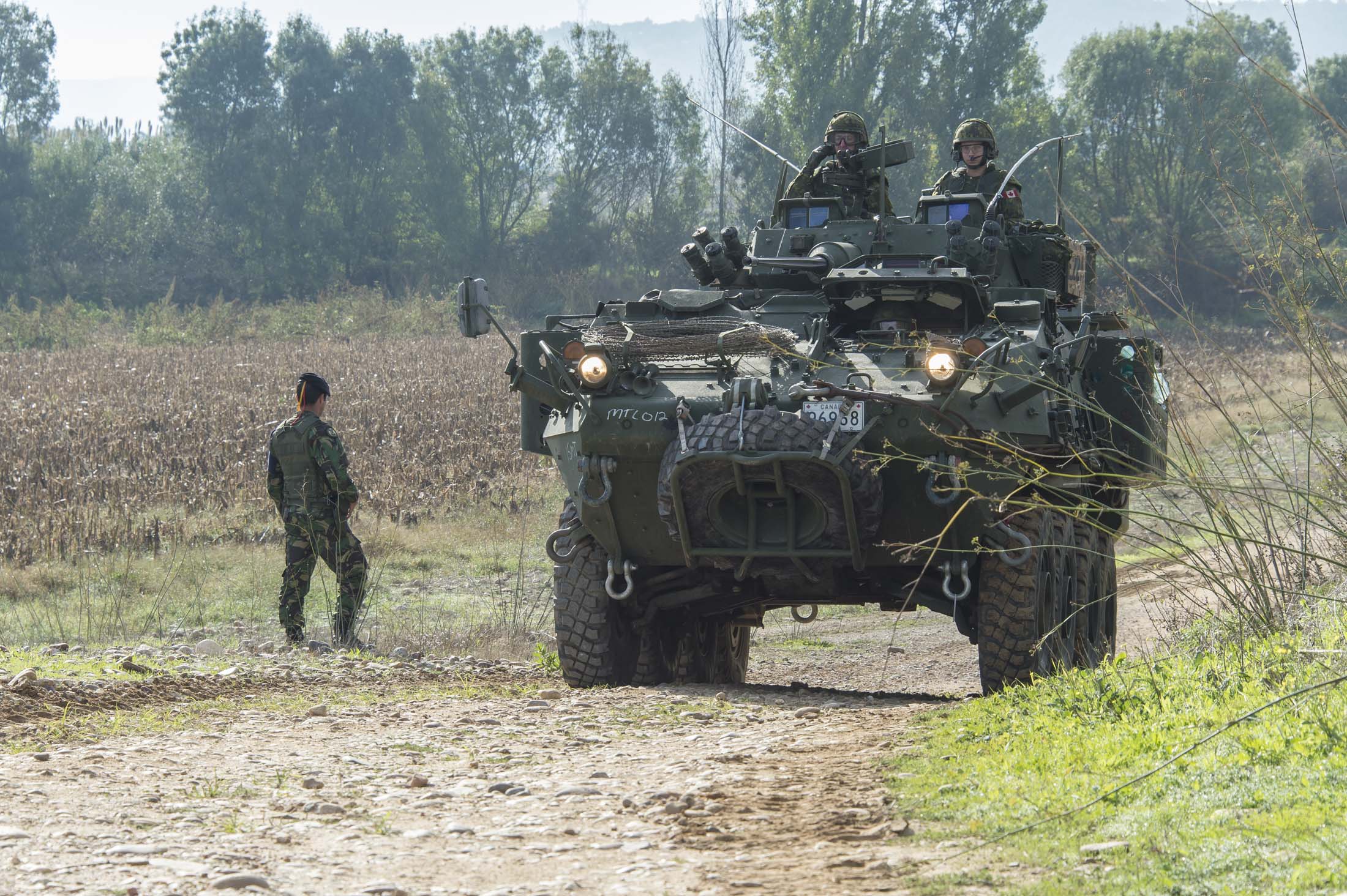 Canada is selling some 900 modified versions of the LAV-III to Saudi Arabia.
Master Corporal Jonathan Barrette/Canadian Forces Combat Camera
Canada has been selling armoured vehicles to Saudi Arabia, and as a result has been included on a list of countries called out by a United Nations panel for perpetuating the war in Yemen.

The three-member panel says third-party states continue to profit from the unrelenting fighting, despite previous admonishments. It’s the first time the experts have named Canada in their annual assessment.

“Notwithstanding the strong recommendations by the Group [of Eminent International and Regional Experts] in its previous reports, third States, including Canada, France, the Islamic Republic of Iran, the United Kingdom of Great Britain and Northern Ireland, and the United States of America, continued their support of parties to the conflict including through arms transfers, thereby helping to perpetuate the conflict,” said the report.

In almost four pages of conclusions and recommendations, however, the panel devoted just one line to the role of third-party states in perpetuating the conflict.

They should “take all reasonable measures to ensure respect for [International Humanitarian Law and International Human Rights Law] by all parties to the conflict; in particular, by refraining from providing arms and military support to the parties,” the panel urged in a 55-page report, its third, to the UN Human Rights Council filed Sept. 9.

Yemen is one of the world’s poorest countries. At its core, the nine-year-old civil war pits Houthi rebels, supported by Iran, against the Saudi-backed government of Abdrabbuh Mansour Hadi. 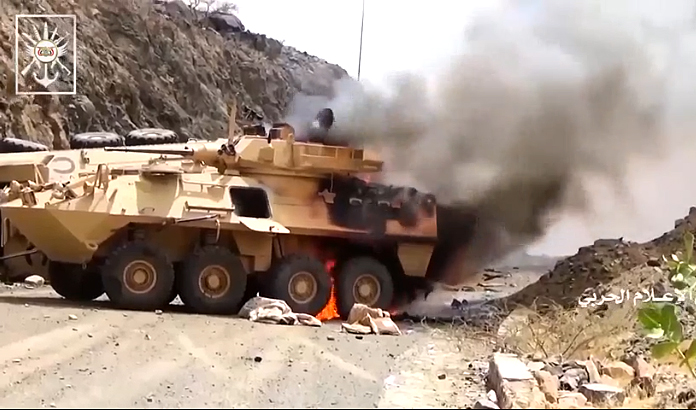 A Canadian-made LAV-25 is seen burning in a still image released by Houthi rebels in Yemen.
Houthi military handout
The particularly brutal conflict has been marked by indiscriminate killings, disappearances, torture, child soldiers and enforced famine—war crimes in the panel’s words. Some 112,000 people have reportedly died in the fighting.

Ardi Imseis, a law professor at Queen’s University in Kingston, Ont., was appointed to the panel in December. He told a news conference that Canada was added to the list of named countries because of a marked increase in arms sales in 2019.

“Given Canada’s historical commitment to the rules-based international order, including the need to ensure protection of civilians in armed conflict, it is imperative that Ottawa review its ongoing flow of arms to parties to the conflict, namely Saudi Arabia and the United Arab Emirates,” said Imseis.

“Providing the instruments of war to any side in the Yemen conflict will only serve an enabling function, thereby continuing the conflict to the great detriment of civilians in Yemen.”

“It is imperative that Ottawa review its ongoing flow of arms to parties to the conflict.”

Canadian sales of military goods to Saudi Arabia span governments in Ottawa, and they have all steadfastly refused to cancel the contracts in the face of widespread calls to do so. To the contrary, the sales—almost all light armoured vehicles (LAVs) manufactured in London, Ont., by a subsidiary of U.S. defence contractor General Dynamics Corp.—hit a record $2.9 billion in 2019, under a $14-billion contract brokered by a federal Crown corporation.

The deal to sell Saudi Arabia more than 700 LAVs was first announced by the then-Conservative government in 2014. The contract was later approved by the Liberal government.

Canadian-made vehicles operated by Saudi soldiers have been filmed in purported skirmishes across the Saudi-Yemeni border, including in footage provided by Houthi rebels in October 2019 of LAVs captured in a battle with Saudi forces.

Taxpayers face stiff financial penalties if the contract is cancelled.

The current government has refused to end the sales to Saudi Arabia despite pressure from human-rights advocates. It has said taxpayers face stiff financial penalties if the contract is cancelled.

The UN panel has repeatedly cited the contributions of third-party states to the war in Yemen, although its admonishments of any contributors other than the principals typically lack punch and are couched in the language of UN diplomacy.

“The onus is also on the international community, especially those States that have influence over parties to the conflict, to both condemn and take appropriate steps to prevent the violations and to assist Yemen in ensuring that the perpetrators of crimes are held to account,” the panel said in its September 2019 report.

“Moreover, the continued supply of weapons to parties involved in the conflict in Yemen perpetuates the conflict and the suffering of the population.”

In a memo released in April 2020 following a review of Saudi trade deals sparked by the murder of Saudi journalist Jamal Khashoggi, Global Affairs Canada said it was closely monitoring the situation in Yemen and Saudi Arabia: “The Department assesses that, overall, Canadian exports of military goods and technology to [Saudi Arabia] contribute to regional peace and security.”

While missiles and bombers would likely be used in Yemen “to commit or facilitate violations” of humanitarian law, the memo said: “As regards other military items—including LAVs—the Department concludes that there is no substantial risk that these items would be used for any of the negative consequences specified” in the Export and Import Permits Act.

“As Canada cannot enforce its export controls legislation extraterritorially, many of the mitigation measures…may require consent or co-operation from the government of [Saudi Arabia], and therefore may not be feasible in the current context of the bilateral relationship.” 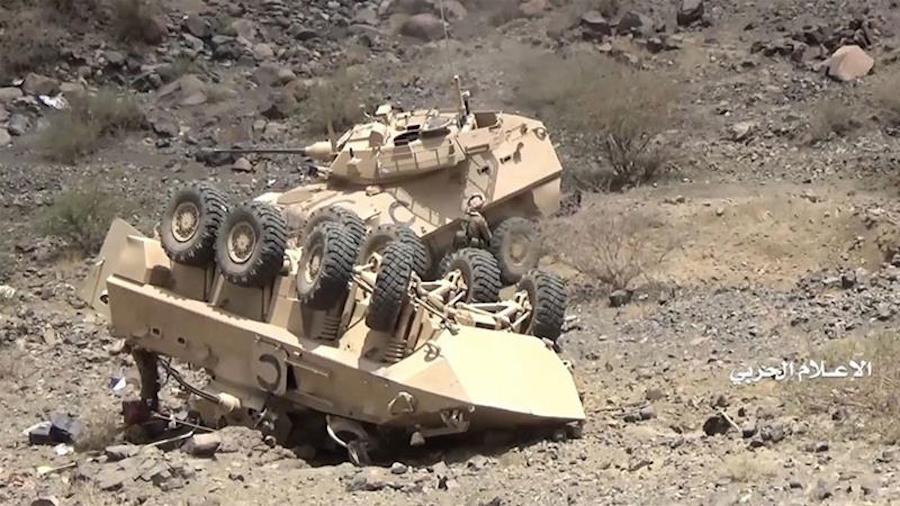 A screen grab from a video by Yemen’s Houthi movement allegedly shows two Canadian-made Saudi light armoured vehicles destroyed by the group.
Houthi military handout
Saudi Arabia shares a 1,500-kilometre land border with Yemen, it noted, and Yemen sits at the intersection of the Red Sea and the Gulf of Aden, “a major transportation corridor for Saudi and international shipping.”

“As with any State, [Saudi Arabia] has a legitimate security interest in protecting its territorial integrity and protecting itself from terrorist attacks,” said the memo.

“Instability in Yemen poses a direct threat to [Saudi Arabia] in terms of attacks on its territory by the Houthis as well as the potential that Yemen, as a failing state, could provide a safe harbour for terrorist organizations, such as Al-Qaida in the Arabian Peninsula (AQAP) and Daesh.”

The memo noted that previous reports by the UN panel of experts on Yemen had not faulted Canada for arms exports to combatants, even though they “explicitly questioned the legality of arms transfers by France, the United Kingdom and the United States.”

“The Department concludes that there is no substantial risk that current Canadian exports of military goods and technology to [Saudi Arabia] would undermine peace and security, either nationally or regionally.”

The UN panel said in its report that there is no end in sight to Yemen’s multiparty war.

“Whether through ongoing airstrikes, the crippling blockade, indiscriminate artillery attacks, impeding humanitarian relief supplies and access to food and healthcare, harm from landmines, arbitrary detention, torture and enforced disappearances, widespread displacement, assaults on civil society and minorities, recruitment and use of children, gender-based violence, and endemic impunity, Yemen remains a tortured land, with its people ravaged in ways that should shock the conscience of humanity.”