The taking of Monte la Difensa 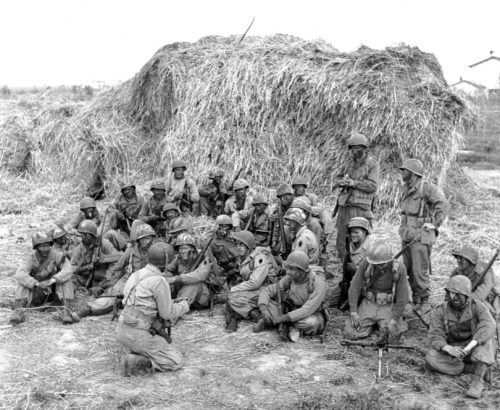 Members of the First Special Service Force prepare for a combat patrol in Italy in 1944.
DND
Lumberjacks, mountaineers, construction skywalkers, hard-rock miners, wilderness prospectors—only the hardiest men were sought for the First Special Service Force, a Canada-U.S. joint venture to deploy troops against the highest odds in the toughest terrain of the Second World War.

Recruits’ mettle was severely tested even before tasting combat. They earned their parachute badges in the first week of training. They learned how to survive knife fights and, blades unsheathed, bayonet attacks. They mastered unarmed combat and the art of silent killing.

They became adept at skiing, rock climbing, arctic survival skills, handling weapons and blowing things up. They had to complete 97-kilometre marches in 20 hours, ski cross-country in formation through the night. They were trained to be human pack horses, going where animal and machine could not, carrying 45-kilogram packs.

They were issued stickers—to leave on the enemy’s gear during surreptitious patrols—sporting the brigade’s insignia and the words, in German, “The worst is yet to come!”

After a year, 1,400 hard-bitten commandos emerged from this rigorous training, 697 of them Canadian—the Devil’s Brigade.

They were trained to be human pack horses, going where animal and machine could not.

In early December 1943, they were tasked with capturing Monte la Difensa in Italy.

Thousands of men had already died trying to break through the fortified barrier meant to stop the Allied advance to Cassino and on to Rome. Dug in on the heights, the Germans rained down destruction.

“We camped at the foot of the mountain and then after dark we climbed these ropes…with all our gear,” recalled Alan Edgar Blackwell in one of several Memory Project interviews quoted here. At midnight, in freezing rain, they were climbing the final 300-metre cliff.

“At daylight…we were on top of the mountain behind the Germans,” said Blackwell. They were supposed to hold fire until 6 a.m., but the Germans, alerted by the sound of falling gravel, sent up flares. “Then all hell broke loose. We had one hell of a fight, lost a lot of men, but in five hours, we had the mountain.”

“We were given what was thought to be an impossible job, and we accomplished it in 48 hours,” said William McGee. It was initially estimated it would take at least a week.

The brigade had a short break for resupply, which included condoms (to keep the barrels of their guns dry) and whiskey (to lubricate the victors).

“From there, we went on to other mountains,” said Tom O’Brien.

The taking of Monte la Difensa is immortalized in the 1968 American film The Devil’s Brigade.