The prince with a common touch 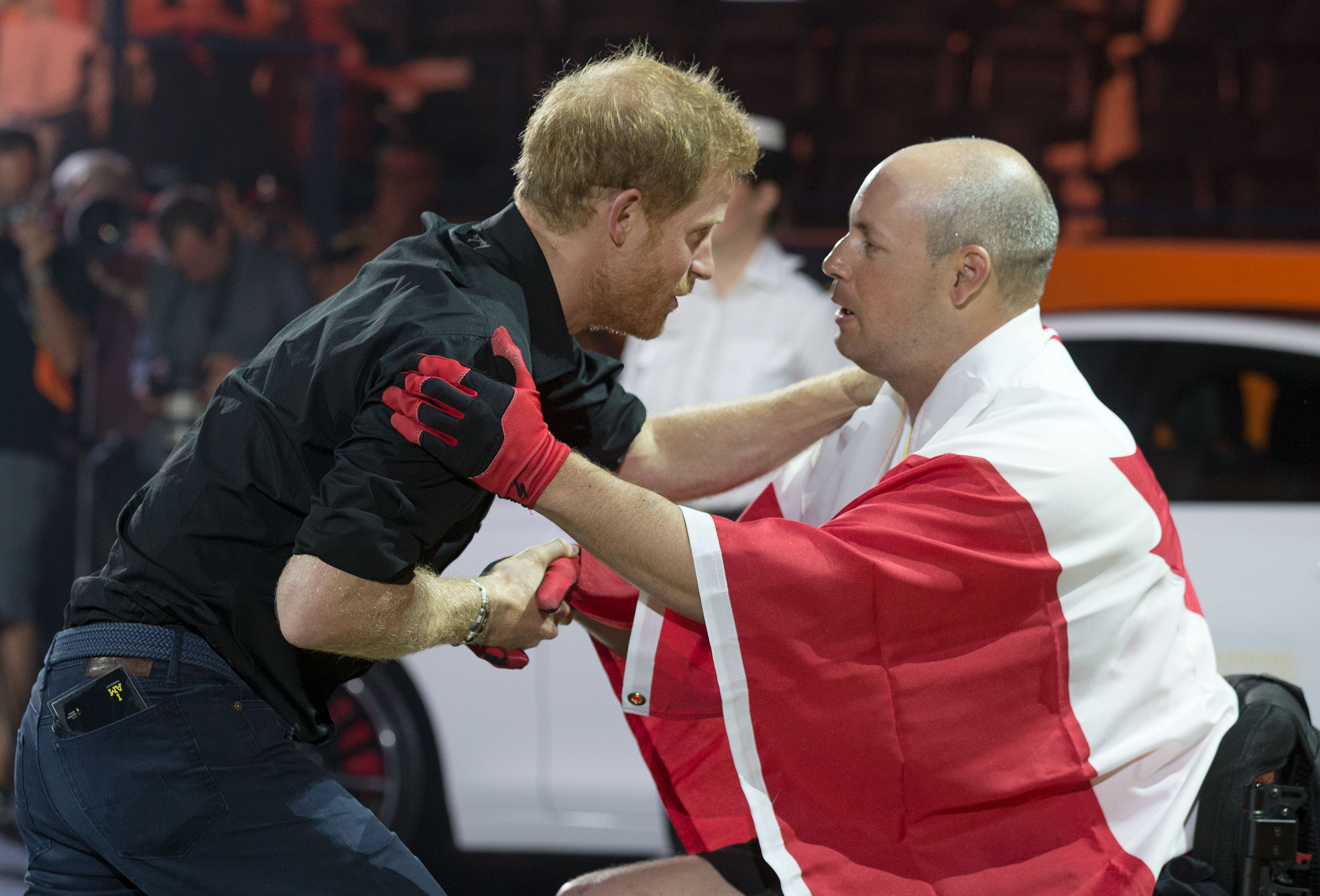 Prince Harry congratulates Mike Trauner after presenting him with one of his two gold medals in indoor rowing.
Stephen J. Thorne/Legion Magazine
Mike Trauner was a prisoner in his own home until a few inspiring words from Prince Henry of Wales, better known as Harry, set him free.

As a master corporal with 3rd Battalion, Royal Canadian Regiment, Trauner lost both legs and sustained other major wounds in a 2008 double bomb blast in Afghanistan. In May 2016, he was recovering from yet another surgery when he met Harry at the official launch leading to the Toronto Invictus Games.

Trauner had been “trapped” at home since his last operation—one of 18—and, after a long year of slow recovery, was feeling frustrated and depressed. Then 2017 Invictus Games CEO Michael Burns invited him to Toronto.

Prince Harry, founder of the Invictus Games and himself a war veteran, approached Trauner at a reception, introduced himself and asked the Canadian for his story. When it became clear Trauner wasn’t ready to compete at the 2016 Games in Orlando, Florida, the prince issued him a challenge.

“This is what I want you to do,” he told the retired infantry soldier. “I want to see you on the team for the next Games in Toronto. I personally challenge you to come out and do your best. Pick your sport.” 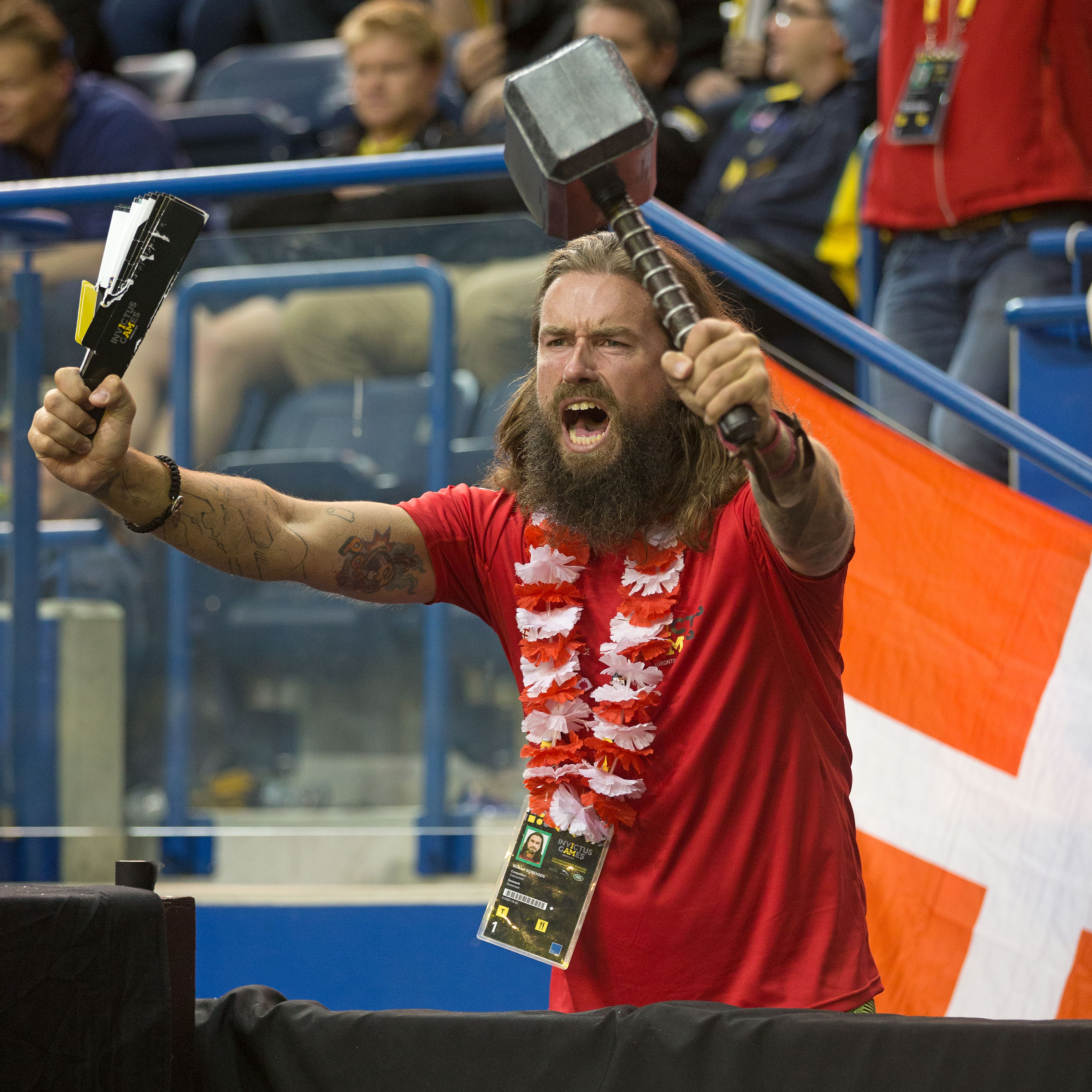 Danish athlete Michael Sorensen, cheers on his teammates in the wheelchair rugby final. Denmark defeated the U.K. for the gold, 23-18.
Stephen J. Thorne/Legion Magazine
That, and the inspiration he gleaned from seeing wounded, injured and ill comrades rise from the ashes through Invictus training and competition, set him on a 500-day quest, give or take, that brought him back to Toronto last month, where he competed in two sports and earned four medals.

Trauner’s hardware included two gold medals in indoor rowing events, one of which a clearly pleased Prince Harry himself placed around Trauner’s neck. The broken man who was confined to a wheelchair when they met was now confident, bulging with muscles and walking on two prosthetic legs.

“It was pretty humbling to meet Prince Harry,” says Trauner. “But it’s not like one of these things where people meet somebody who’s famous or somebody who’s important and they go goo-goo-ga-ga over them or they’re star struck. With Harry, it feels like you’re talking to another soldier.” 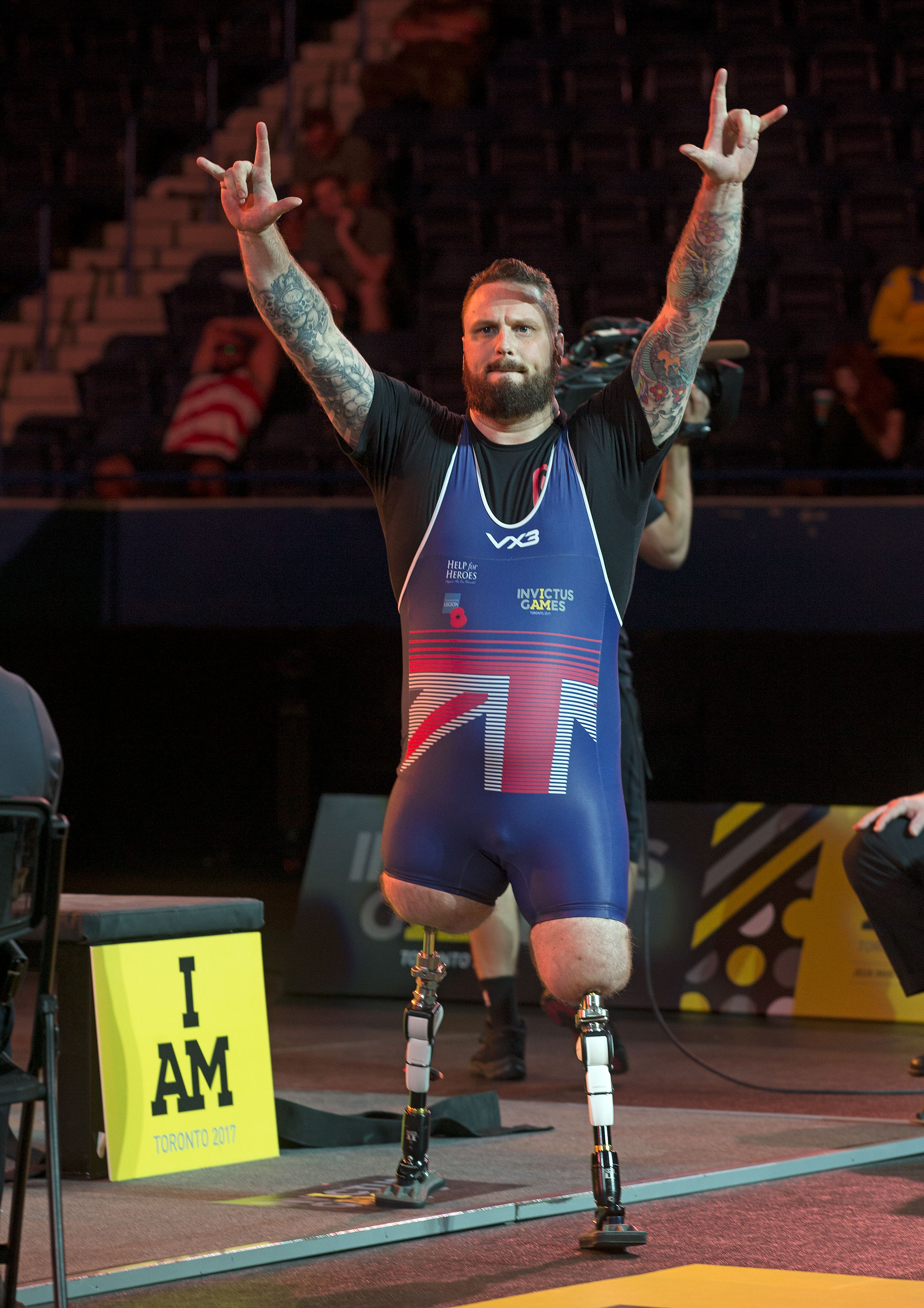 Clive Smith of the U.K. acknowledges fans after his lift in the men’s midweight powerlifting final.
Stephen J,. Thorne/Legion Magazine
Indeed, Harry is another soldier. As a lieutenant in the Blues and Royals (Royal Horse Guards and 1st Dragoons), he trained alongside Canadian troops at CFB Suffield in Alberta in 2007 before deploying on the first of two tours in Afghanistan. He served as a forward air controller in volatile Helmand Province, where he helped Gurkhas repel an attack by Taliban insurgents.

On his return to the United Kingdom, Harry earned his helicopter wings, and in 2012 deployed again, this time on a five-month combat tour as a co-pilot and gunner aboard an Apache attack helicopter. He would eventually earn his Apache command stripes.

During the Games’ opening ceremony in Toronto last month, Harry described how his first trip home from Afghanistan left a lasting impression, one that would eventually lead to the creation of the competition for wounded, injured and ill soldiers. 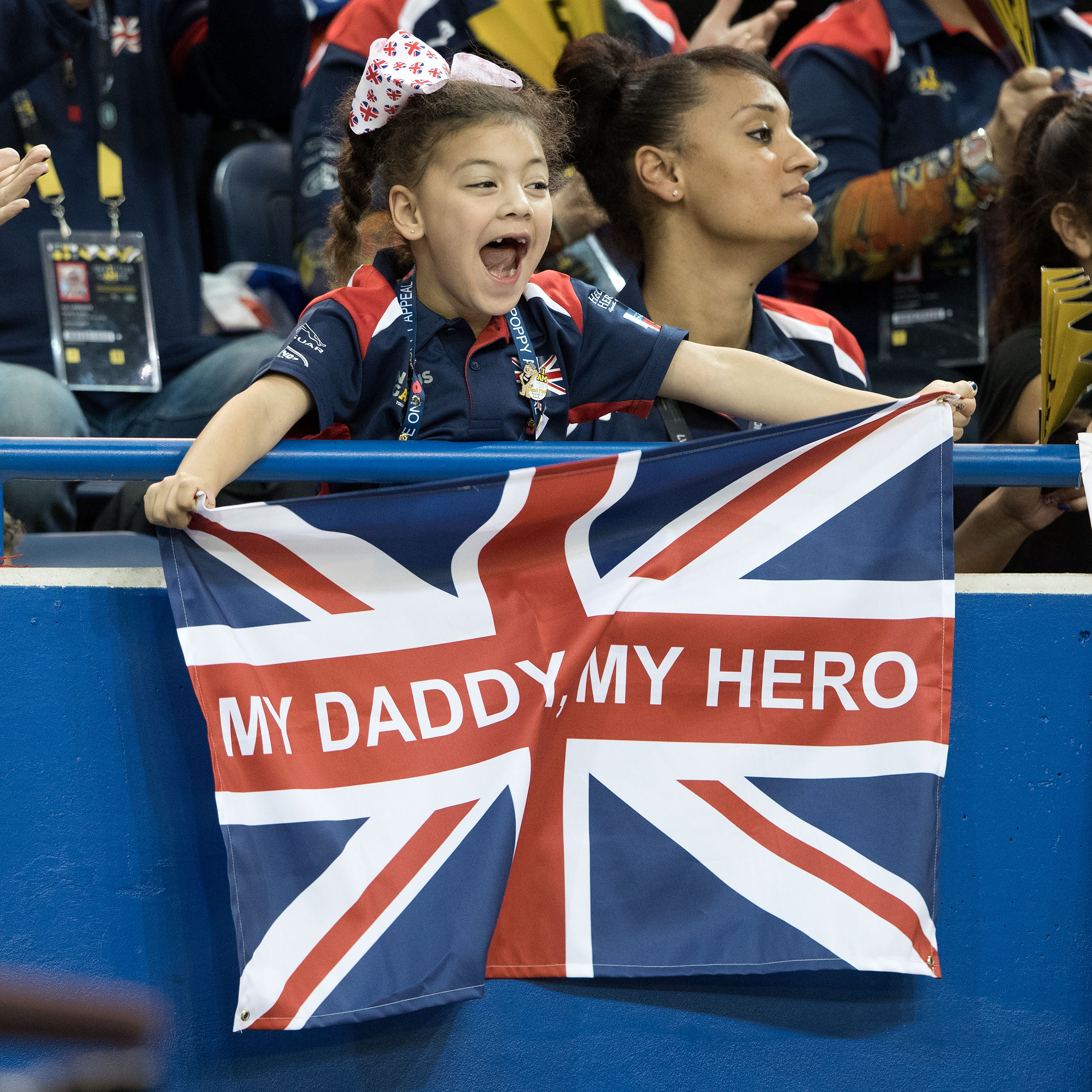 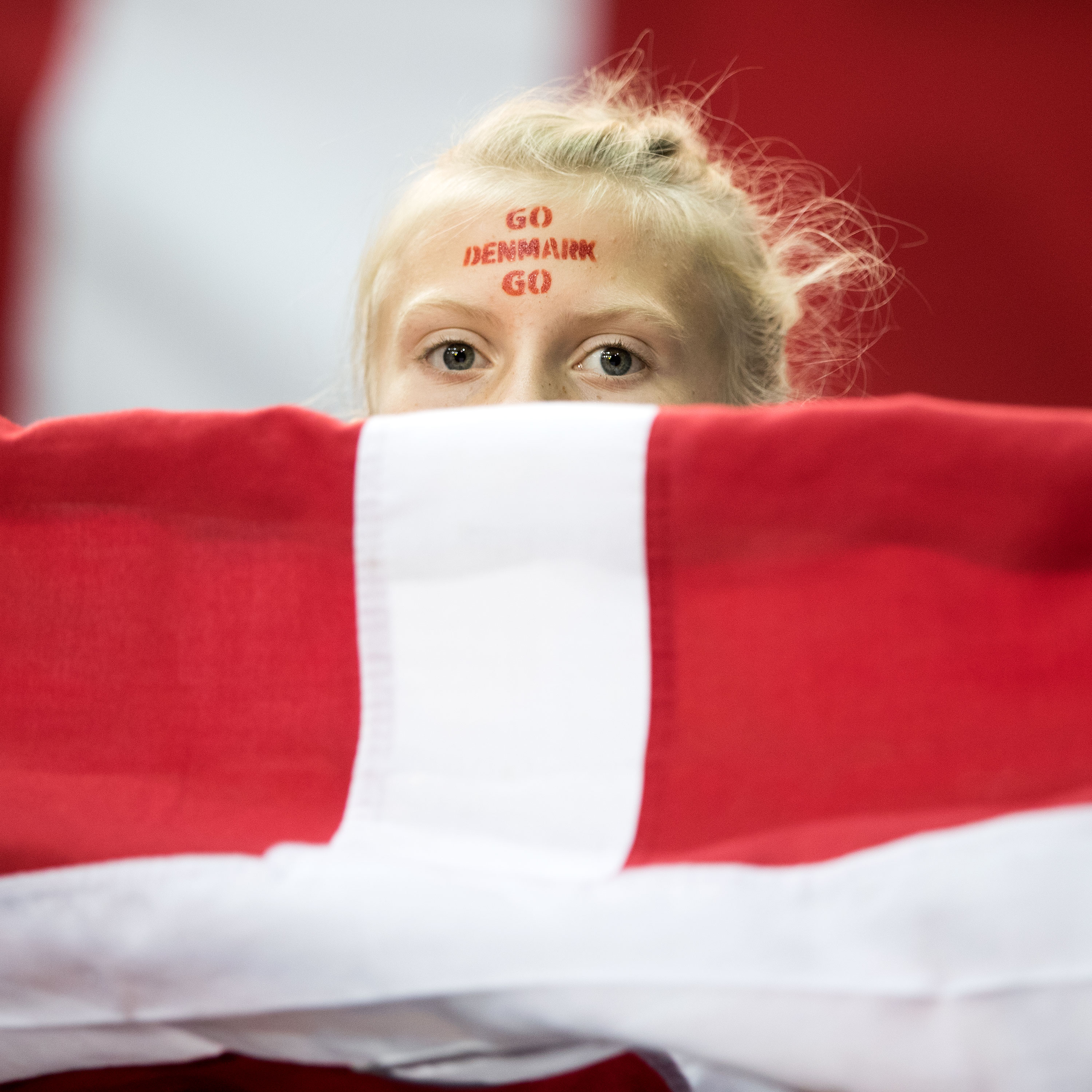 Denmark supporter at the wheelchair rugby final.
Stephen J. Thorne/Legion Magazine
It was 2008 and as Harry sat aboard the plane that would take him on the first leg of his long journey home, Danish soldiers loaded the coffin of a comrade.

“Once on the flight, I was confronted with three British soldiers, all in induced comas with missing limbs and wrapped in plastic,” said Harry. “The way I viewed service and sacrifice changed forever, and the direction of my life changed with it. I knew that it was my responsibility to use the great platform that I have to help the world understand and be inspired by the spirit of those who wear the uniform.”

On March 6, 2014, the Invictus Games were born, and Harry, whose army career ended in June 2015, has been the linchpin ever since, helping lift those who are down to new heights and giving them new purpose.

Following in the footsteps of his late mother, Diana, Princess of Wales, whose hands-on work on behalf of AIDs sufferers, landmine victims and others earned her the affection of people the world over, the 33-year-old redhead has attended all three of the Invictus Games so far, and it’s not just a token appearance. 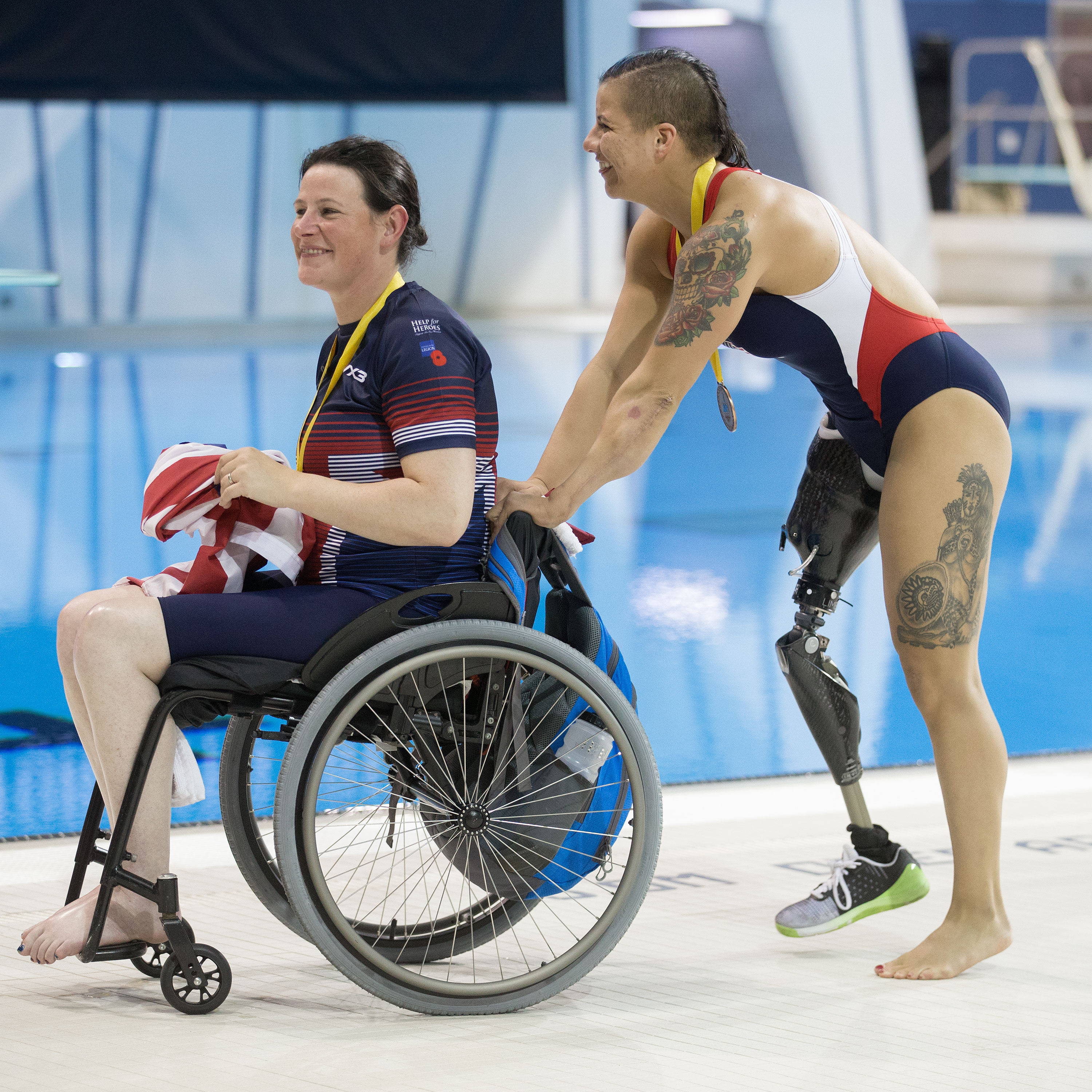 America comes to the aid of Britain after a medal ceremony at the pool.
Stephen J. Thorne/Legion Magazine
He stays for all of it, mingling with the athletes, many of whom he has come to know personally, handing out medals, watching competition from high up where the lights don’t shine, attending associated conferences, and working behind the scenes to better the veterans’ plight and the public’s understanding of the issues they face.

He does this with grace, authenticity and no apparent pretence. He readily embraces his comrades in arms, and they embrace him. The formalities of royal protocol give way to the warmth and mutual respect of a band of brothers and sisters who have been to hell and back.

“I got this right from him: he likes to hang out with the soldiers,” says Trauner. “Harry likes to feel like one of the guys. He’s more comfortable with the soldiers and he does miss it. He really does miss serving his country. I think that’s why a lot of soldiers can relate to him so easily—because he’s not Prince Harry from the Royal Family. He’s one of us.” 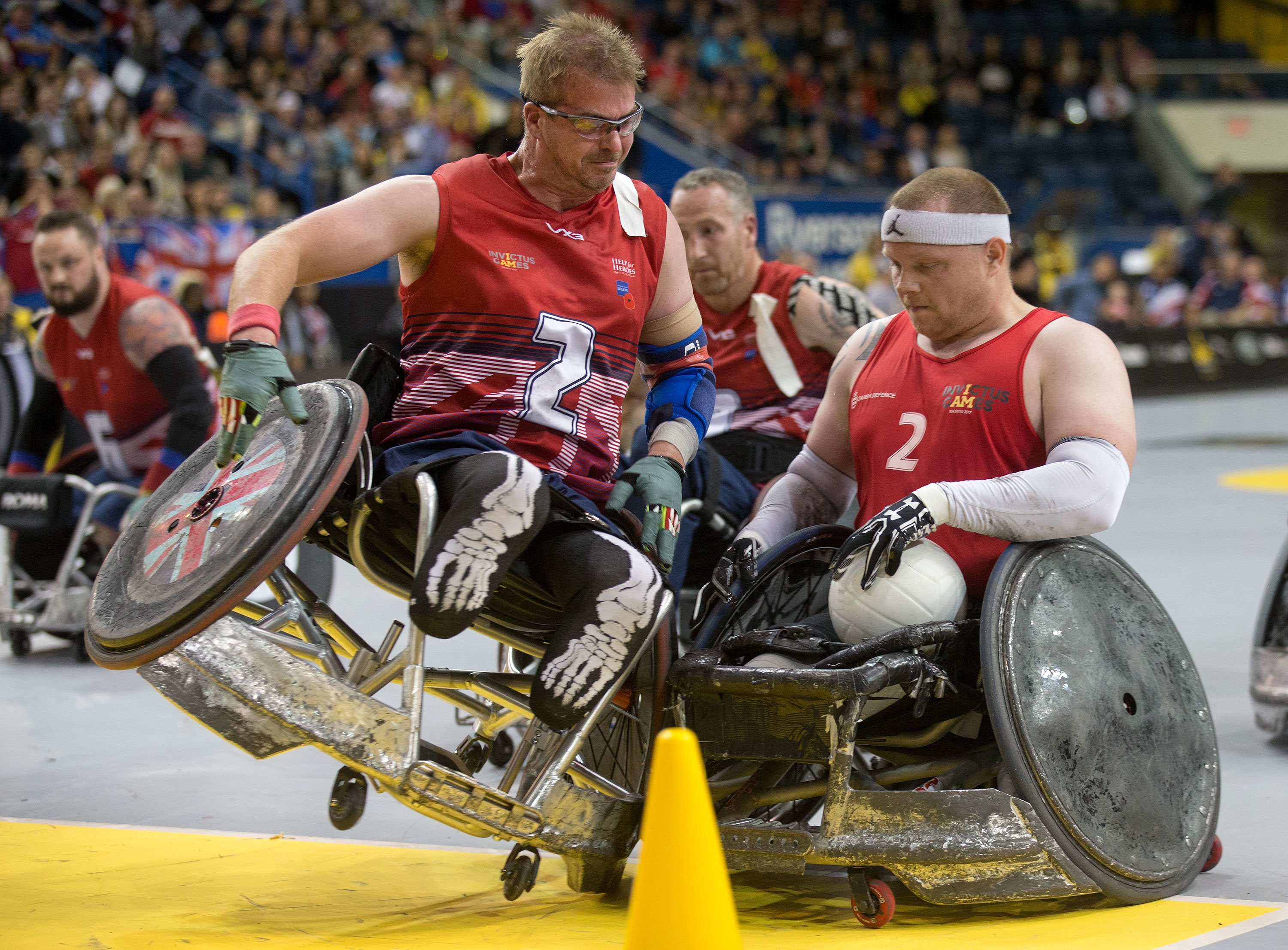 Competition between Britain and Denmark in the wheelchair rugby final.
Stephen J. Thorne/Legion Magazine
Harry’s presence never distracted from the athletes except, perhaps, when he arrived at a tennis event holding hands with his girlfriend, American actress and Toronto resident Meghan Markle—their first public appearance together amid rumours of an impending engagement.

Dressed in jeans, he didn’t arrive inside venues with a splash or a readily visible phalanx of security. He instead slipped into a seat somewhere inconspicuous and watched the action with rapt attention. He sat alongside colleagues and athletes, munched popcorn, carried on with kids, kissed the shaven heads of medal winners, posed for selfies, chatted with participants, all the while seemingly oblivious to the legion of long camera lenses pointed in his direction.

At medal ceremonies, he would make his presentations, pose briefly with the winners, then sink back into the recesses and watch with the affectionate eye of a proud papa as these once-broken, forever-changed men and women basked in the glow which he had magnified, never stolen. 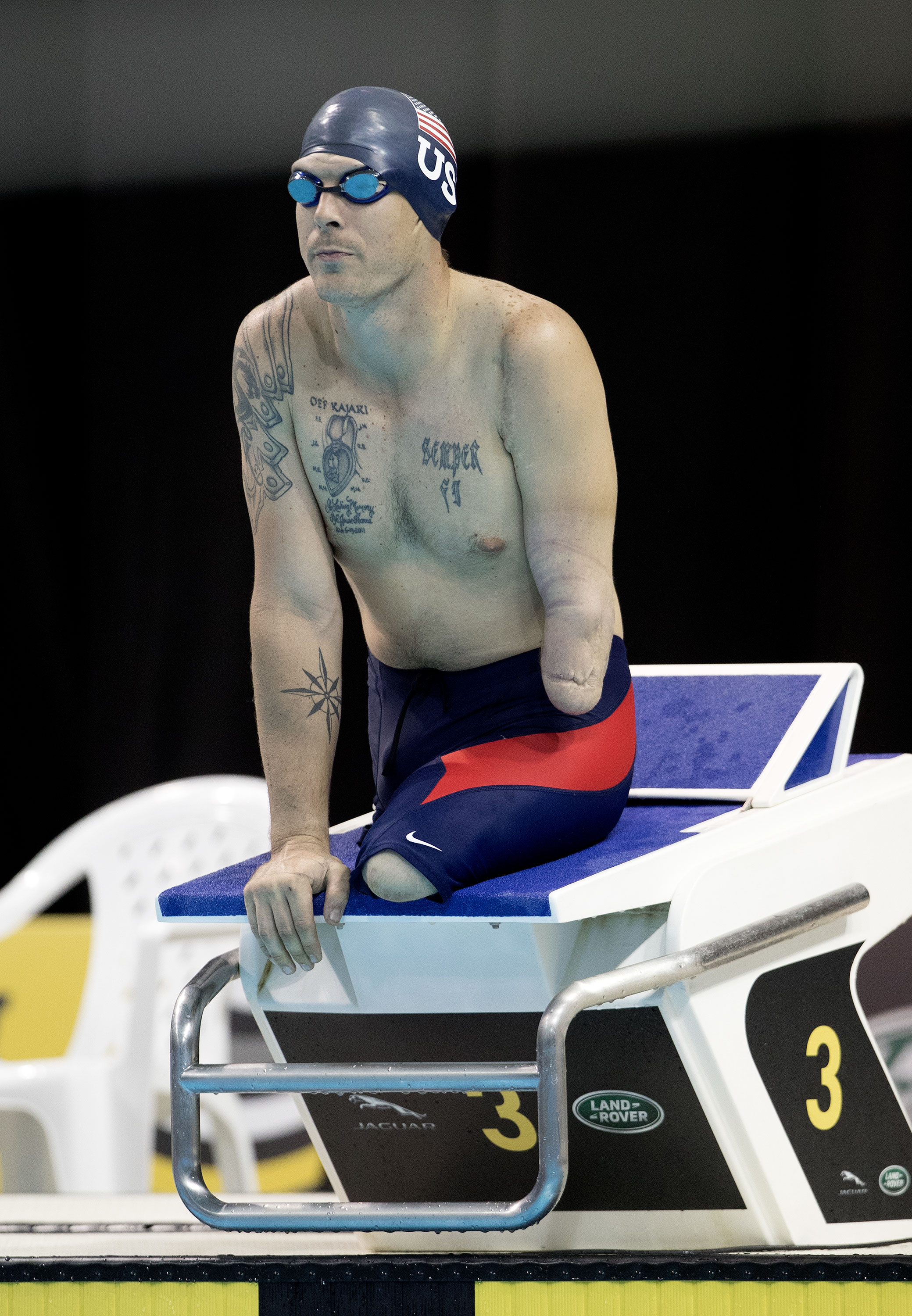 American Michael Nicholson prepares for the men’s ISA 50-metre freestyle final. He won silver.
Stephen J. Thorne/Legion Magazine
His respect for and connection with them were evident. They felt it, and returned it. The Games, after all, had transformed their lives, even saved some.

Trauner and his wife Leah Cuffe—his rock—saw Harry almost every day of the Games. The couple appeared alongside him in interviews and at symposiums, and bumped into him at events and on the medal podium.

“It’s incredibly important, what he has done,” said Trauner. “From my own personal experience, look where I was. I was trapped in my house and I wasn’t able to leave or do anything. 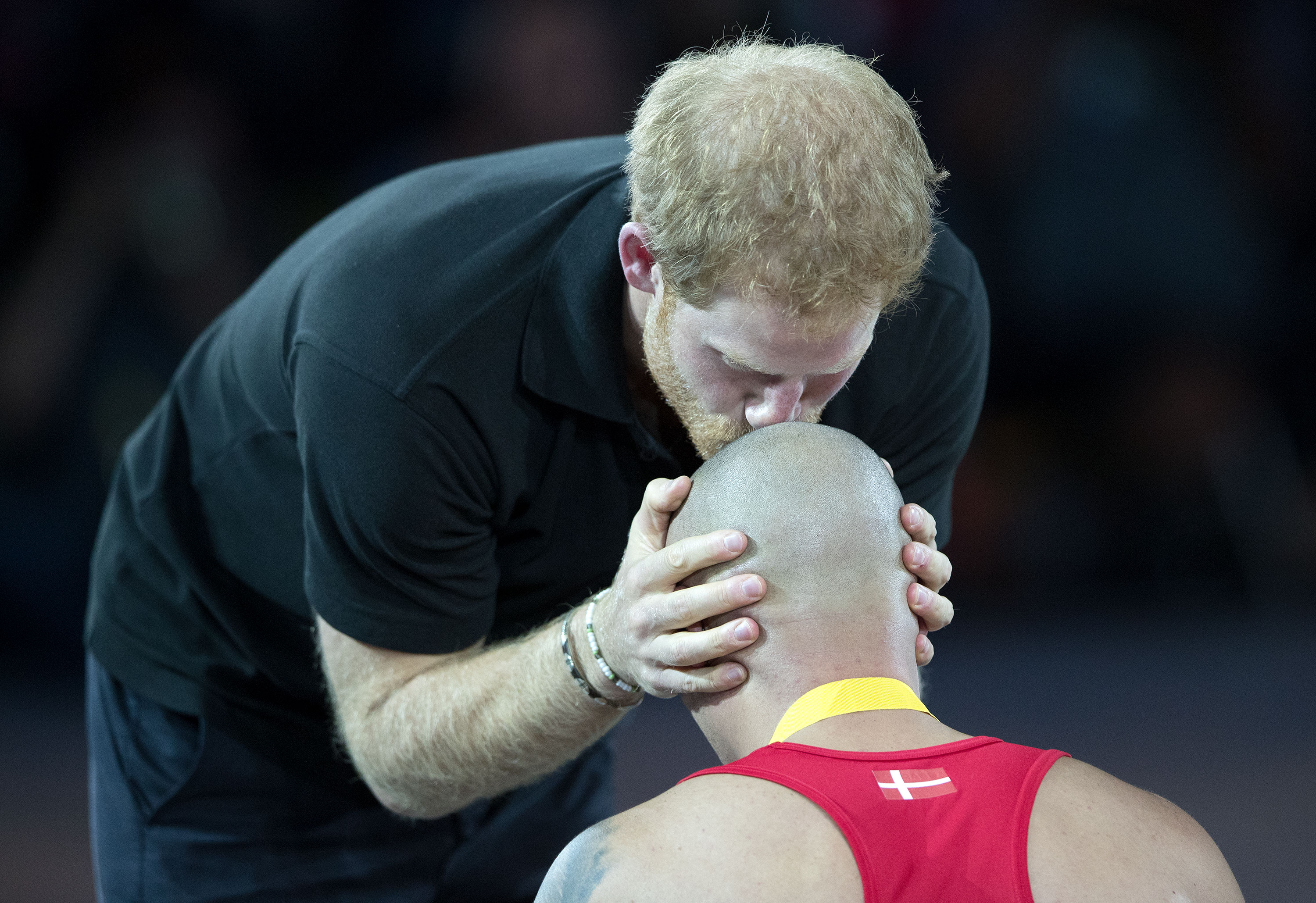 Prince Harry kisses the bald head of a Danish gold medallist after Denmark defeated the U.K. in wheelchair rugby at the 2017 Invictus Games.
Stephen J. Thorne / Legion Magazine
“The Games basically got me back out there, got me able to do things again. They showed me that just because you have an injury, it doesn’t mean you have to stop. If anything, it does the opposite. It gets you off your ass, it gets you motivated. To say the Games are important, that’s an understatement.”