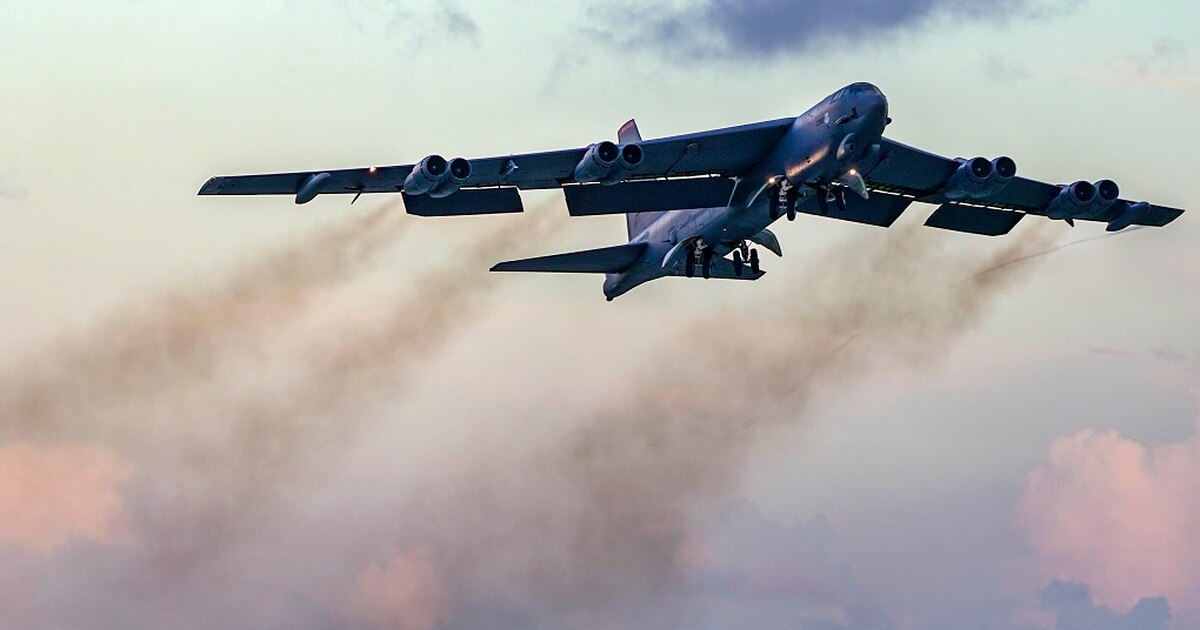 An American B-52 Stratofortress of the type that conducted bombing operations over Afghanistan.
Defense News

A series of reports produced by the Costs of War Project says the American military is contributing significantly to climate change, emitting more greenhouse gases than some developed countries and compromising national security in the process.

The United States Department of Defense is “the world’s largest institutional user of petroleum and correspondingly, the single largest producer of greenhouse gases in the world,” according to Pentagon Fuel Use, Climate Change and the Costs of War, a report by Neta C. Crawford, a co-director of the project, based at Brown University’s Watson Institute.

The figure is equivalent to the annual emissions of 257 million passenger cars, or double the number of existing cars in all of the United States.

So how could this undermine the military mission?

Scientists and security analysts have warned for more than a decade that global warming is a potential national security concern.

“They project that the consequences of global warming—rising seas, powerful storms, famine and diminished access to fresh water—may make regions of the world politically unstable and prompt mass migration and refugee crises,” writes Crawford, a professor of political science and department chair at Boston University. “Some worry that wars may follow.”

In Canada, the melting of Arctic ice has opened the Northwest Passage to sea traffic for the first time in recorded history. Russian cruise ships routinely sail the Canadian-claimed waters, while foreign submarines—including American—patrol the depths, all without regard for Canada’s claimed jurisdiction. Multiple countries claim swaths of the Arctic as their own, and the issue is becoming more contentious as the region becomes more accessible. 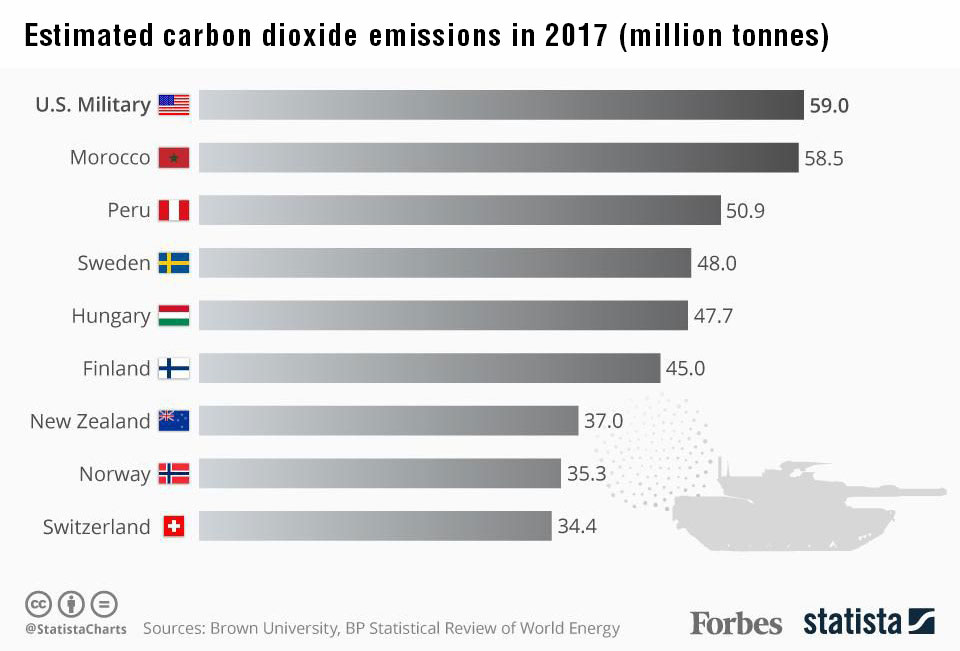 The above graph compares U.S. military CO2 emissions to those of entire nations (not their militaries).
Brown University, BP Statistical Review of World Energy
As early as 2007, the U.S.-based Center for Strategic and International Studies was warning that, even under conservative global-warming estimates, national security implications could include heightened internal and cross-border tensions caused by large-scale migrations; conflict sparked by scarcity of resources; increased disease proliferation; and economic consequences. There would be “some geopolitical reordering as nations adjust to shifts in resources and prevalence of disease.”

“Across the board, the ways in which societies react to climate change will refract through underlying social, political, and economic factors,” the centre reported.

Indeed, American military and intelligence “act as if the negative security consequences of a warming planet are inevitable,” says Crawford’s report. The Defense Department has studied the problem for decades and it has already begun adapting its plans, operations and installations to deal with climate change.

The report points out that military force requires lots of energy, most of it in the form of fossil fuel.

“Energy is the lifeblood of our warfighting capabilities,” the report quotes former general David Petraeus, who served 14 months as director of the Central Intelligence Agency.

War-related emissions—including those in Afghanistan, Pakistan, Iraq and Syria—generated more than 400 million tonnes of CO2 equivalent, says the report. That is roughly a year’s worth of emissions by almost 85 million cars.

The largest sources of U.S. military greenhouse-gas emissions, the report says, are buildings and fuel. The U.S. Defense Department maintains more than 560,000 buildings at about 500 installations at home and abroad, accounting for about 40 per cent of its emissions.

The rest comes from operations. In fiscal 2016, for instance, the U.S. military consumed about 86 million barrels of fuel for operational purposes.

“The U.S. military is preparing for threats of attack from human adversaries,” says the report. “The threats of terrorism, Russian, Iranian, Chinese or Korean aggression are all real, but terrorists and these countries are not certain to attack [America]. Arms control and diplomacy can de-escalate tensions and reduce threats.

“Economic sanctions can also diminish the capacity of states and non-state actors to threaten the security interests of the U.S. and its allies,” it adds.

“Global warming is the most certain and immediate of any of the threats that the U.S. faces in the next several decades…. If the U.S. military were to significantly decrease its greenhouse-gas emissions, it would make the dire climate change-caused national security threats the U.S. military fears and predicts less likely to occur.”

The Costs of War Project can be found at https://watson.brown.edu/costsofwar/.

An award-winning journalist, editor and photographer. He has reported on the downfall of South African apartheid and from war fronts in Kosovo and Afghanistan.
All Posts
PrevPrevious ArticleU.S. has spent $5.9 trillion on wars since 9/11, report says
Next ArticleHitler, Raeder, and the demise of the Kriegsmarine Next