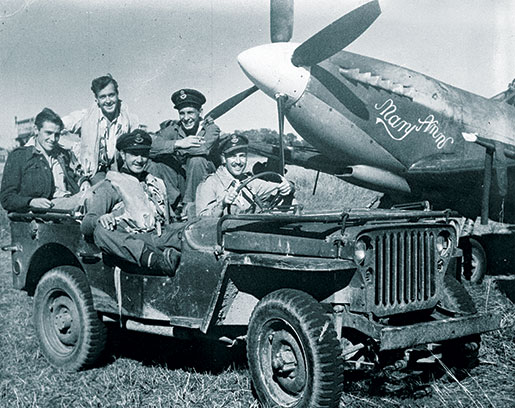 Squadron Leader Robert Day behind the wheel of a jeep, joined by other Far East personnel.
PHOTO: LIBRARY AND ARCHIVES CANADA—e011086438

By the monsoon season of 1942 the Japanese had taken as much of Burma (now Myanmar) as they wanted. They had achieved their primary goal of cutting off the land route to China, and it would be many months before they attempted to advance on India itself, and then primarily to forestall British efforts to recapture Burma.

In the meantime, Canadians continued to arrive in the theatre of operations—some to No. 413 Squadron but most to Royal Air Force units. A routine muster dated Jan. 7, 1944, listed 48 Royal Canadian Air Force officers reporting to the Indian theatre in the previous week. Only four were headed for No. 413 Sqdn. Eight had not yet been assigned to a unit and 14 were being sent to training units. The balance was being sent to RAF flying boat, fighter reconnaissance and bombing squadrons. The Canadians were well and truly mixed in with their British comrades. Flight Lieutenant Nathan Levitin, a navigator from Ottawa, arrived in Ceylon (now Sri Lanka) in December 1943 as the only RCAF crewman of a Catalina.

The atmosphere was surreal.

The Indian Army was the largest volunteer army in the world and still loyal to the Raj.  Nevertheless, much of that nation was sullen. There were occasional violent flare-ups as the Congress Party waged a “Quit India” campaign directed at the British.

On Aug. 13, 1942, Pilot Officer Joseph H. Smith of Kamloops, B.C., was murdered as a hostile mob attacked a train at Futwak, northeastern India. Members of the fighting forces were more or less quarantined from India’s upheavals, but even walls of censorship and discipline were porous.  Canadians serving alongside Royal Indian Air Force (RIAF) personnel were aware of tensions with British officers and between Indian communities. On the other hand, some RCAF officers and non-commissioned officers spent time instructing RIAF personnel in technical trades.

The Canadians were scattered throughout the RAF, from offices to radar posts to every imaginable type of operational squadron, sometimes in aircraft types utterly foreign to RCAF units elsewhere.  Moreover, they encountered conditions that were both exotic and uncomfortable. Officers found themselves with Indian servants who seemed straight out of Kipling. They were described as doing everything but take their masters to the bathroom. 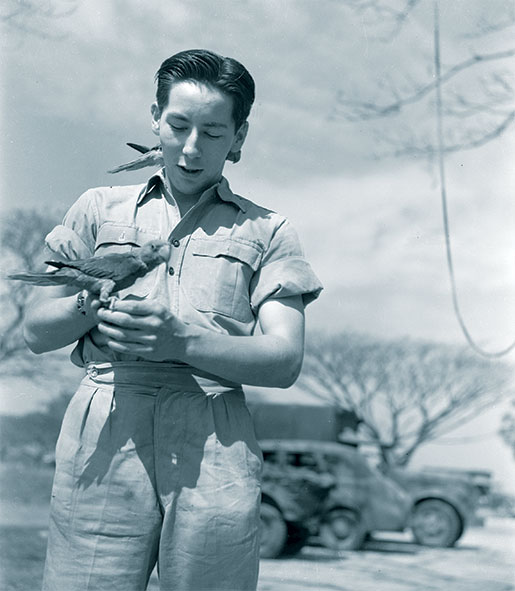 An RCAF report from Calcutta offered the following: “Duties – to wake the officer in the morning with tea, draw a bath, arrange and put out his clothes for the day, shine shoes and buttons, etc. Clean up the rooms on departure of the officer to work. He is on hand again at noon for any odd jobs. Similarly after work at 6 o’clock, brings tea, puts out clothes for the evening, draws bath, etc.  Arranges for laundry to be sent out, arranges mosquito nets for the night. In between times he pinches cigarettes, suggests things that an officer should purchase on which he always receives a fair “commission” which he judges and pockets for himself, and lets you know how dishonest all the other bearers are. He is usually quite a fellow, speaks enough English for you both to get along on and very helpful to officers taking the trouble to try and learn Hindustani.”

Such luxuries, however, vanished in the field. A report on No. 81 Sqdn., which flew Spitfires, in February 1944 noted that personnel drew their water from a single stream. Along the banks were signs which read, in descending order, Men Drinking, Men Washing, Mules Drinking, Mules Washing, and finally Socks Washing.

Families back in Canada were advised not to send parcels containing tea or soft chocolate. More advisable were hard candies and fruit powders, packed in tin cans. Tinned goods were also welcome (peanut butter, pickles, sardines—even Spam). Soap and toothpaste was available locally; razor blades were not. Reading material was always welcome, but what personnel particularly missed were Canadian sports pages and the funny papers.

The climate also affected operational matters. Electronic equipment, notably radar sets, was difficult to maintain in damp conditions. When Mosquito aircraft appeared in the theatre, their plywood and bonding construction proved susceptible to deterioration; this resulted in delayed retirement of Blenheims and Beaufighters. Airfield construction was slow and tortuous because heat and humidity had a debilitating effect on all.

Civilian culture also hindered progress. The caste system, for example, was baffling; if an Indian civilian worker died he could only be touched by another civilian of similar or lower caste.

Flora and fauna on the Burma front were fascinating. A press report in June 1943 told of a fighter station that had elephants as neighbours; bomber crews had tigers nearby. The elephants, wandering about at night were fairly harmless. Many had been abandoned by Burmese teak loggers and had returned to the jungle. A tiger near a bombing station was believed to be a stray. “He has made off with a few cows and a goat or two, but hasn’t been seen yet,” wrote an RCAF press officer. Most feared was the malaria-bearing mosquito; short sleeves and shorts were acceptable dress in daytime but forbidden after dark.

Personnel encountered a zoological maze where it was difficult to tell the “good guys” from the “bad guys”—or to be more specific, the lice that carried typhus from those that did not, or which of the 300 varieties of snakes were dangerous as opposed to those that were benign. “It’s a good thing to examine your bed with a flashlight at night before getting into it; you may find a snake has curled up by your pillow.” 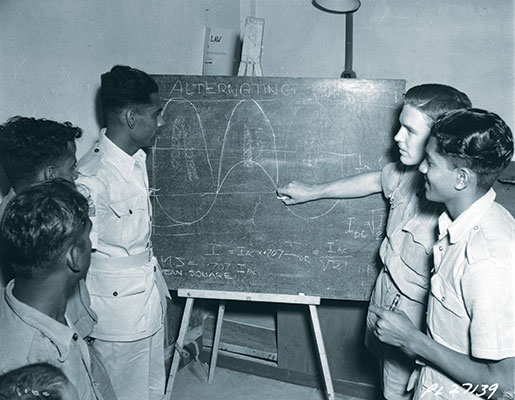 One went to sleep to the screams of jackals, “a call somewhere between that of a coyote with a sore throat and a lovesick banshee.”

A man also had to check his boots in the morning for scorpions. Then there were the ants, “red, black, white or brown, which generally prefer to feed on your clothing, but some will bite humans.”  The most common scavengers were kite-hawks, somewhat larger than a crow, which were bold and ravenous.

The main aerial enemy was the Japanese Army Air Force (JAAF). The India/Burma theatre was considered secondary to both sides, which explained the relatively low aircraft priorities accorded the region. The principal enemy fighter was the Ki.43 Oscar which compared favourably to the Hawker Hurricane. Eventually the RAF introduced Spitfires to the area; the Japanese brought in a few Ki.44 Tojo and Ki.84 Frank aircraft, but other advanced types such as the Ki.61 Tony were reserved for the East Indies, Philippines and eventually for defence of Japan itself.

From the autumn of 1942 onwards, combat between air forces was sporadic. Both sides operated over huge territories. The Japanese had no radar; the allies had little until late 1943 and even that was hampered by the Burmese mountains which screened low-level enemy fighter sweeps. There were few great air battles comparable to the European theatre.

A rare set-piece air battle occurred on Dec. 5, 1943, when the JAAF and land-based elements of the Japanese Navy attacked the Calcutta docks in two waves totalling 27 bombers with swarms of escorting Ki.43s and naval A6M Zeros. The raid caught the RAF by surprise; an attack on Chittagong, which was an important base for Allied forces during the Burma Campaign, had been expected. Japanese casualties were minimal while some eight Hurricanes were lost. Among the RCAF pilots that day was PO A.R. Corston of No. 67 Sqdn., who force-landed his damaged fighter in a paddy field. Corston of Chapleau, Ont., was a Cree and known in the squadron as “Chief.”

Given that the India-Burma theatre was not “target-rich,” Canadian fighter pilots ran up relatively modest scores. One successful RCAF pilot was Sergeant John F. Barrick of Sweetwater, Texas, who had enlisted in Windsor, Ont., in September 1940. Posted overseas in June 1941, he ended up with No. 17 Sqdn., which flew Hurricanes, at the beginning of the Burma Campaign—a time when the problem was one of “too many” rather than “too few” Japanese aircraft.

Between Feb. 7 and April 10, 1942, he destroyed five enemy fighters, was himself shot down, evaded capture, and returned to duty with No. 17 Sqdn. with which he served until January 1944, primarily on ground attack duties. 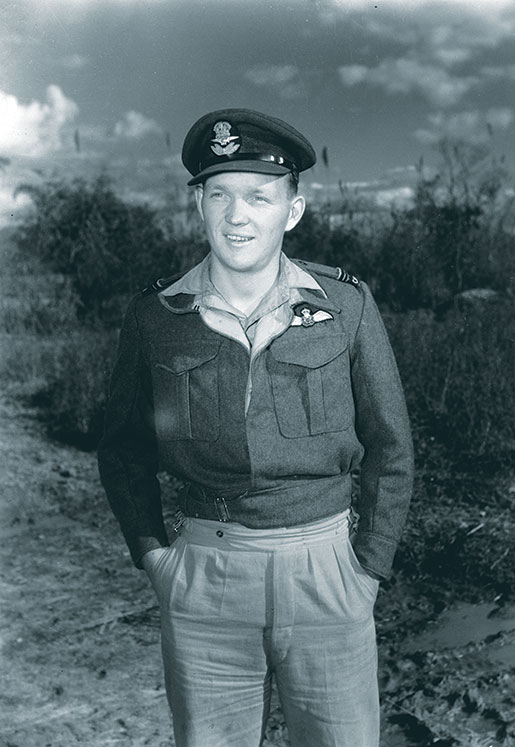 At the other end of the campaign was Squadron Leader Robert Day of Victoria. Following a 1943 tour in Britain he went to India, serving first with No. 81 Sqdn. and then with No. 67 Sqdn. He commanded the latter from December 1944 to February 1945. These units flew Spitfires which dominated their now-obsolescent Japanese opponents. Between February 1944 and January 1945, he shot down five Japanese fighters and shared in the destruction of a high-flying Ki.100 reconnaissance aircraft. His greatest success was on Jan. 9, 1945, when he led four Spitfires onto a formation of six to nine Ki.43s over Akyab Island; five were shot down, two of them
by Day.

Another successful RCAF pilot was Flying Officer Donald Rathwell of Brandon, Man. In the Mediterranean theatre he had participated in the destruction of three German aircraft. Between Feb. 13 and April 25, 1944, he shot down three Ki.43s and damaged two while flying with No. 81 Sqdn.

Nevertheless, Japanese pilots shot down their share of Allied fighters. FO Alexander “Sandy” Morrison of Montreal was one of them. He had gone overseas in February 1941 and joined No. 135 Sqdn. that August. Soon afterwards the unit moved to India. He logged some 160 combat hours in 1942, and was killed on March 14, 1943, in a fierce action between Hurricanes escorting Blenheim bombers and intercepting Ki.43s.

Letters of condolence were often awkward cliches, but there can be little doubt that when Sqdn. Ldr. Ian Bayles wrote, “Sandy was one of the senior pilots in the squadron. As a pilot and officer he was exceptional” it was sincere.