It flew on a surrendered U-boat, then was taken as a trophy

A ship’s ensign indicates the vessel’s national identity. It also embodies its crew’s honour. ‘Nailing the colours to the mast’ showed a crew’s determination to never surrender, as demonstrated by the German battleship Bismarck, which went down in 1941, its battle ensign still flying, after a right royal pounding by the British navy.

The alternative was to ‘strike the colours’—surrender the ensign, and the ship, to the victors, who would replace it with their own ensign—a powerful symbolic action Bismarck denied the British. But it was one freely granted to Canada at the end of the war: the Canadian naval ensign was flown on two U-boats that surrendered in the Western Atlantic.

On May 4, 1945, Admiral Karl Dönitz ordered U-boat crews to return to port or surrender to the Allies, later reassuring them “you will not be staining your honour.” At the time, 156 German submarines were at sea. Two patrolling in the Western Atlantic surrendered to Canadian ships and were escorted to ports in Newfoundland and Nova Scotia. 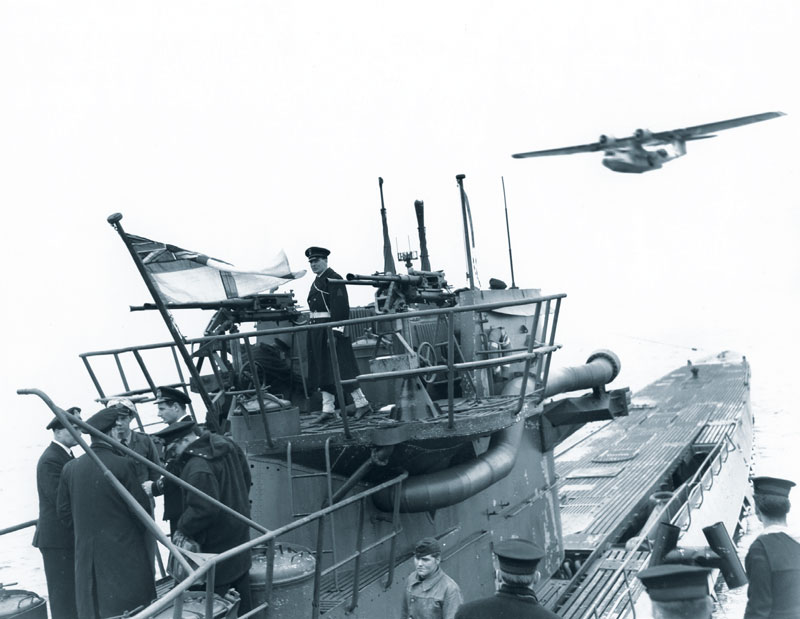 This Canadian Naval Ensign was flown on the German submarine U-889 after it surrendered
Victoria Ioganovv/RCN
U-889 was intercepted on May 10 off Newfoundland’s southeast coast and officially surrendered on May 13 upon arrival in Shelburne, N.S. The next day, it was commissioned into the Royal Canadian Navy. The sub “was fitted with the newest submarine technology,” said navy Captain Jean Stéphane Ouellet, commander of the Canadian Submarine Force at Esquimalt, B.C. HMCS U-889 flew the Canadian navy ensign at the Naval Research Establishment in Halifax while its technology, particularly the acoustic torpedoes and hydrophone array, was studied and tested.

“I thought it would be a good idea to give it back to the navy.”—Able Seaman Bob Haden

Although trophy collecting was discouraged, U-889 was going to be handed over to the United States navy and “it is not unreasonable to assume that officers and sailors alike wanted to have a keepsake,” said Ouellet.

Able Seaman Bob Haden, a motor mechanic posted to the U-boat, had his eye on a brass clock, he said in a story in Lookout. But the timepiece had also caught the eye of an officer, who offered the ensign in exchange. And so, a piece of Canadian history was squirrelled away for more than three quarters of a century until, at the age of 97, Haden decided to return it to the navy, handing it over to Ouellet in the fall of 2021 in a ceremony at the Royal Canadian Legion’s Prince Edward Branch in Victoria.

The ensign is to be mounted, framed and displayed at the Canadian Submarine Force headquarters in Esquimalt, next to the Canadian ensign from HMCS U-190, the sub that sank HMCS Esquimalt in April 1945, the last Canadian ship lost to enemy action.

U-889 was scuttled by the United States in 1947 but U-190 had a more symbolic ending: at the site where it sank Esquimalt, it was targeted and sunk on July 24, 1947, by Royal Canadian Navy ships and aircraft of the Naval Air Arm. 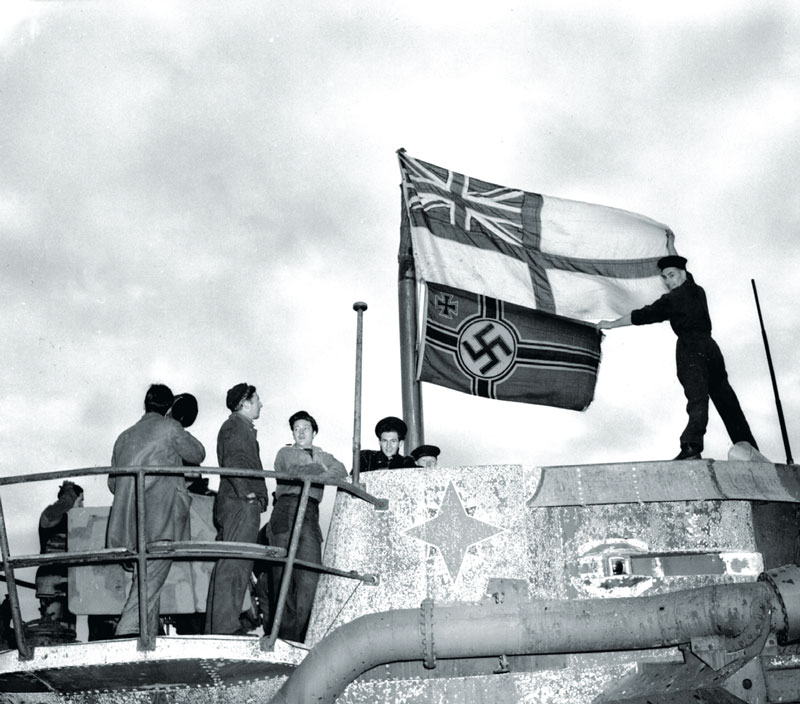 A Canadian Naval Ensign  flies above a Kriegsmarine war ensign on the snorkel of U-190 as it is escorted to Canada.
EdwardW.Dinsmore/DND/LAC/PA-145577