Home » Military History » On The Water, On The Beach

On The Water, On The Beach

Landing craft en route to Normandy, June 6, 1944. Note the stack of bicycles and the number on the door telling how many bunks are below.
PHOTO: GILBERT ALEXANDER MILNE, LIBRARY AND ARCHIVES CANADA–PA135966

It was shortly after noon on June 5, 1944, when we left the south coast of England. We didn’t know where we were heading until a couple of hours later when we opened sealed orders after clearing the boom between the mainland and the Isle of Wight.

From then on we knew exactly where we were going, and while we did not know it at the time, the operation would change the course of the war. We were part of the largest combined land, air and sea forces ever assembled, and we were en route to Normandy, France.

Today I sit comfortably in my home at Saint-Lambert, Que., contemplating in my 88th year the huge block of time—65 years to be precise—that separates that day from today. And while a lot of detail has faded from memory, I can recall specific events—as well as faces—from June 5-6, 1944.

I was 23 years old—just a kid with a background in trigonometry, serving in the Royal Canadian Artillery as an officer’s assistant in one of the troops of the 14th Field Regiment.

We were crossing the English Channel in a Landing Craft Tank (LCT), a flat-bottomed vessel built to run up on land (or more likely close to shore) where it would drop its bow ramp and then deposit men and machines in the midst of battle. I can still remember—early on during our crossing—the inch-to-a-mile map showing key locations, including where our first gun positions would go. There were approximately 40 of us on board, including the LCT’s crew, sharing space with four self-propelled 105-mm guns, a command tank and a Bren gun carrier with an infantry liaison group.

The sea was rough that morning, and many of the men had to take leave from playing poker or shooting dice to relieve upset stomachs over the side of the LCT as she bounced and pounded on the waves. 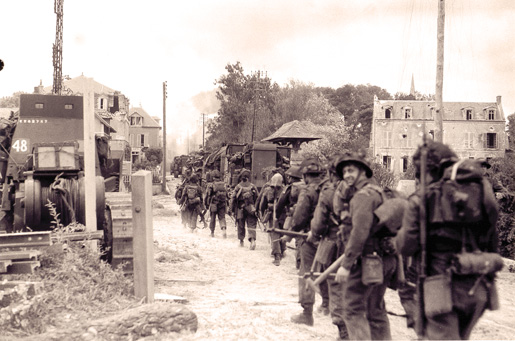 We could not sleep, and I got into the biggest game of Red Dog in my life. It was a high-stakes poker game that lasted throughout the night. Pretty well everybody on board played until they got ‘cleaned out,’ including the senior brass. Others watched and I ended up with the equivalent of $3,000 Canadian stuffed into my pockets. That was a lot of money in those days, and my winnings left me feeling—rightly or wrongly—more than a little vulnerable to those who did not do so well. My success was beginner’s luck because it was the only time I ever played Red Dog. I had put down everything—English pounds and French francs.

As the game ended and night turned to day we witnessed one of the most amazing sights. In every direction—as far as the eye could see—there were Allied ships, drawn into a massive armada.

Soon we were given the task of firing a barrage in front of our infantry as it assaulted the Normandy beaches at Bernières-sur-Mer. We were still well off shore at that point, and so it was a challenge to aim well above the heads of the assaulting infantry. The LCT continued to bounce around in the rough water, and so the trick to acquiring a good line of fire was to maintain your course and speed. Our job was to provide harassing fire for the Queen’s Own Rifles of Canada which landed on Juno shortly after 8 a.m.

I remember seeing the Duplex Drive amphibious tanks. Equipped with propellers and a buoyancy capability, these machines were designed to power through the water and stay afloat while heading to the beach. Unfortunately, some of them sank in the rough seas. I also noticed barges with rockets firing away, and heard the heavy locomotive sound of huge shells passing overhead from a warship we could not see. With all the noise I experienced, I never felt shameful years later applying to Veterans Affairs Canada for a pension for hearing loss.

It was around 9 a.m. when our craft hit a mine. We were in approximately six feet of water and the LCT’s ramp was destroyed. We went right down, but our vehicles didn’t stall because they had extended sides and extended exhaust pipes. The Bren gun carrier of the infantry regiment we were supporting got off the sinking LCT, but was blown up after hitting a mine.

I was on the tank—standing up in the turret, and I saw the Bren gun carrier rise up and then go upside down. It was like a huge whale jumping out of the water and then falling back down. A little later we tried to check for survivors, and possibly tow the wrecked carrier onto the beach, but we were warned by the beach master to keep moving.

While looking toward the shore and across the sandy beach I noticed many dead and dying soldiers on our side of a concrete seawall. It was a terrible sight.

Our group was on the beach by 9:25 a.m. and remained there for a good hour, sitting ducks with shells and bullets flying over our heads. Eventually, we took our turn getting through a narrow gap in the seawall at Bernières-sur-Mer. We were strafed only twice by enemy aircraft while on the beach.

While stuck in traffic inside the town one of our guys got shot in the head by a sniper. He was in front of us and the bullet came from a house which was later flattened. The sniper was a woman, and the rumour we heard was she was French, the girlfriend of a German soldier.

The field our battery had been allotted to was occupied by another battery so we ended up entering a field that had been mined. Our success at manoeuvering safely into the field was made possible with the warnings we received from a French boy of about 14 or 15 who had told us the Germans had forced him to lay the mines. With a little persuasion from the end of my rifle the lad sat on the front of our tank and showed us the way through.

That evening German planes arrived and created havoc with the ammunition dumps. It was a wonderful fireworks display, but damn scary. We also discovered around that time that our French francs were of little use. The only acceptable currency was in the way of cigarettes.

From the generals down, mistakes were made, but we did win the day. And we must never forget those brave young men who were left behind 65 years ago.

The Victory And The Cost The French Connection Centred On Juno Mayhem In Normandy: Army, Part 102