Love for the liberators 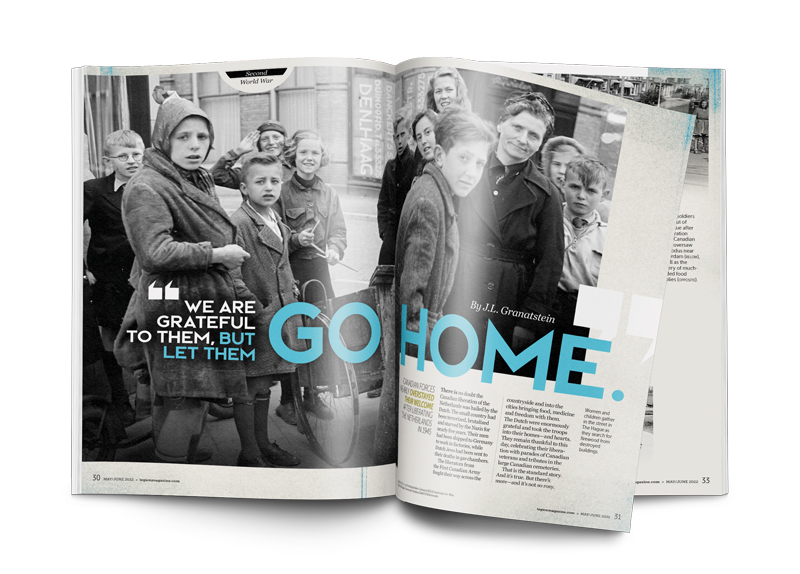 Comments can be sent to:
Letters, Legion Magazine, 86 Aird Place, Kanata, ON K2L 0A1
or e-mailed to: [email protected]

As a Dutch Canadian born in the eastern part of southern Holland some months before its liberation, I was very interested in the articles on Canada’s freeing of the Netherlands (“Liberation!” and “We are grateful to them, but let them go home,” May/June 2022). My background is a part of why I am so fascinated by the friendship between the two countries.

The Dutch joy following the liberation was, at least in part, relief that the tribulations of German occupation and the hunger of the 1944-45 winter were behind them. One Dutch witness observed: “You know, we were overwhelmed by the friendliness and hospitality of our liberators. This was in such sharp contrast to the hostility and arrogance of the Germans…. My friends and I spent much time among the soldiers, worshipping them as heroes. In turn, they displayed a warm kindness that stood out so noticeably after the years of Nazi tyranny.” Clearly, the Canadian soldiers and the Dutch public got along well.

But, as J.L. Granatstein has written, even a welcome guest can stay too long. As transport ships were in short supply, Canadian soldiers were still in Holland in 1946 and there were incidents of friction, though these were temporary. The lasting memory of the liberators’ time in Holland is captured by a skit done by a local town in Groningen to honour departing Canadian soldiers. In it all the different troops were depicted—the Americans with sloppy salutes, the Germans goose-stepping, a little Englishman saluting a corporal and hopping. But the house came down as a Canadian soldier entered, a girl on each arm, a carton of cigarettes and a bottle of whisky in his hands, drunk as can be. People laughed and cheered. The fondness they had for the Canadians overcame the foibles and excesses of the soldier.

Encounter with a saviour

I appreciated John Boileau’s article in the March/April 2022 issue on Leonard Birchall (“Saviour of Ceylon”), which concluded by noting that Leonard himself never used that nickname. Indeed, he was a very modest man. I worked with Leonard when he was an administrator at York University in Toronto in the mid-1970s. I had just graduated and was in my first job, and Len was incredibly friendly, kind and helpful.

I mentioned to my father, Wes, who had served in the air force near the end of the Second World War, that York had hired quite a few ex-military officers. He asked for names and when I said Len Birchall, he almost fell off his chair, so excited that I knew the Saviour of Ceylon. Dad subsequently retired, helped rebuild his local air force association wing and began attending association conventions (he met Len at one). Dad could hardly wait to tell me that both of us could now claim to have met the Canadian war hero. It was nice to remember both Len and my father while reading this article.