Lost In The Azores 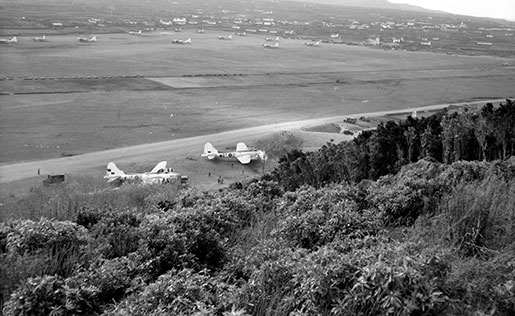 Members of the Lost Legion—Royal Canadian Air Force personnel who served overseas in British rather than Canadian units—saw many harsh or uncomfortable places, from Russia to Southeast Asia. Some locations, however, were quite delightful, including the Azores in the Atlantic Ocean.

The Portuguese discovered the islands in 1431 and claimed ownership of them ever after. Between 1580 and 1640, Portugal was part of Spain, and the Azores were fair game for Elizabethan adventurers who preyed on Spanish shipping. In 1591, Sir Richard Grenville, captain of the British warship Revenge, fought his heroic battle off the island of Flores, celebrated in Lord Tennyson’s poem.

The Anglo-Portuguese alliance is the oldest in British diplomatic history. Growing out of feudal wars and joint interest in the Crusades, it found expression in a treaty signed in 1373. More than 400 years later it allowed the Duke of Wellington to gain entry to the European continent and begin the Peninsula campaign that was disastrous to Napoleon’s ambitions. In the Second World War the alliance acquired new importance.

By the summer of 1943 the momentum of the Battle of the Atlantic had turned decisively against the Germans. Allied air and sea power based on Newfoundland, Iceland and Britain had inflicted crippling losses on the Kriegsmarine across the North Atlantic. The enemy sought Allied shipping in what seemed to be safer waters, notably the central Atlantic, but even these hunting grounds were about to become Allied waters, thanks to aircraft carriers and new airfields. Negotiations in August 1943 led to the establishment of air bases in the Azores which increased anti-submarine coverage into the central Atlantic. By then there was no chance that the Germans would occupy Portugal itself. In the process, that country put itself firmly on the winning side with little cost beyond stretching the definition of “neutrality.”

The Azores archipelago—three main groups of volcanic islands—are warm with no extremes in temperature, although with very abundant rainfall. At more than 2,350 metres, Mount Pico is the highest point, but it is well removed from the island of Terceira, the focal point of activity. Although some hills rise to 900 metres, the topography of Terceira offers no major challenges to aircraft. Valley fog, however, is another matter.

British personnel—soon followed by Americans—found the population to be very friendly and helpful. They provided eggs, cheese, meat, vegetables, butter, wine and fruit to men who had lived on British rations for years. The Azores were the poorest province of an impoverished nation; ox carts were common and water wheels were high tech. The militarization of the islands undoubtedly boosted the local standard of living.

In May 1919 the islands provided a stopover for United States Navy flying boats making the first aerial transit of the Atlantic. In the 1930s the islands were on the route of Pan American “clipper” flying boats. Portugal itself developed an air base at Lagens on Terceira, and had Gladiator fighter aircraft based there early in the war.

However, Lagens was unsuited to heavy aircraft until the Royal Air Force arrived early in October 1943. Equipment was landed at Angra do Heroismo and then hauled over primitive roads to the base site. Later, every gallon of gas and oil consumed would have to travel those same roads. Sixty thousand steel mats ensured the airfield would be weatherproof. 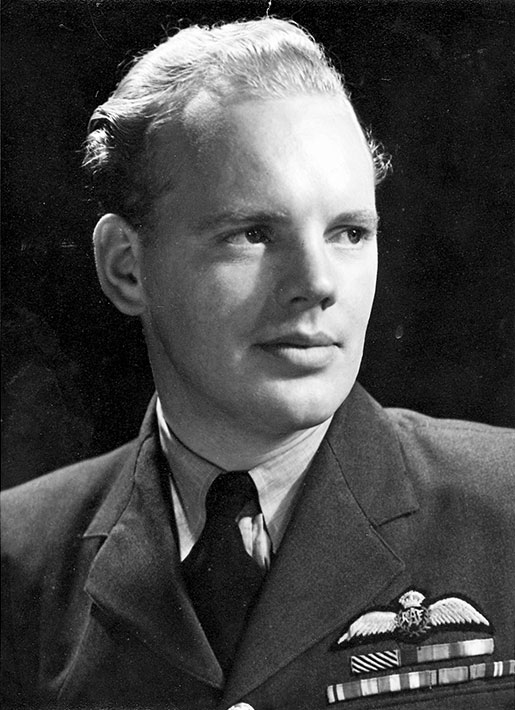 Until quarters and offices could be installed in Nissen huts, personnel were accommodated in tents—four officers or eight non-commissioned officers or 12 other ranks per tent. Water was short; men were sometimes excused from shaving until rain water had been collected.

The location of the islands and the lack of any serious aerial threat meant that there was no need for a blackout. Only once did a German aircraft approach the islands, when a Ju.290 ventured near, apparently on a weather reconnaissance.

On Oct. 18, 1943, a vanguard Fortress of No. 220 Sqdn. arrived, soon followed by more from No. 206 Sqdn. and Hudsons of No. 233 Sqdn. From November onwards the base was regularly used by Leigh Light Wellingtons of Nos. 172 and 179 squadrons from Devon and Gibraltar. British and American aircraft being ferried from North America to the Mediterranean and Middle East passed through, and even the mail-carriers of the RCAF’s No. 168 (Heavy Transport) Sqdn. landed.

The RCAF presence was notable from the beginning. Lists of ground crew personnel are sparse, but aircrews were well represented in the Fortress squadrons. As of January 1944 there were 23 in No. 206 Sqdn. and 41 in No. 220 Sqdn. As such they constituted some 20 per cent of the flying strength. The numbers rose and fell as men and units moved. No. 233 Sqdn., for example, soon left to become a transport unit. It was replaced by a detachment of No. 269 Sqdn. However, the greatest responsibilities were those borne by the Fortresses and Wellingtons.

Operations from Lagens began on Oct. 21, 1943, and the first casualty was a Fortress of No. 220 Sqdn. that crashed at sea on the 25th; the dead included three members of the RCAF. Another Fortress crash on takeoff, Dec. 4, killed a crew that included two members of the RCAF. Two more Canadian fatalities followed on Dec. 13 when a Hudson of No. 233 Sqdn. crashed near Lagens.

The first U-boat sighting was on Oct. 27. On Nov. 9, 1943, U-707 was sunk by another Fortress of No. 220 Sqdn. piloted by Flight Lieutenant R.P. Drummond of the RAF; the sole RCAF member of the eight-man crew was the co-pilot, Flying Officer Robert D. Thompson of Montreal.

The next U-boat sinking was very much a “Commonwealth” affair on Nov. 19, 1943. Flying Officer Donald McRae of Vancouver was piloting a Wellington of No. 179 Sqdn.; his crew included three members of the RAF, one from the Royal Australian Air Force and one from the Royal New Zealand Air Force. They were flying a night escort to two convoys when a radar contact led them to U-211, clearly visible in bright moonlight. McRae did not even switch on his Leigh Light; he achieved complete surprise. At the time he was uncertain of the outcome. He had sunk U-134 in August 1943 and severely damaged U-760 in September.

The next victim of a Lagens-based aircraft was U-542, sunk on Nov. 26 by a Wellington of No. 179 Sqdn. Flight Sergeant Donald Cornish of Scout Lake, Sask., was captain of what was otherwise a British crew. It was a night attack—this time using the Leigh Light—during which the submarine fired on the Wellington. Like McRae, Cornish was not sure what he had achieved; in fact, U-542 was the third U-Boat he had destroyed. 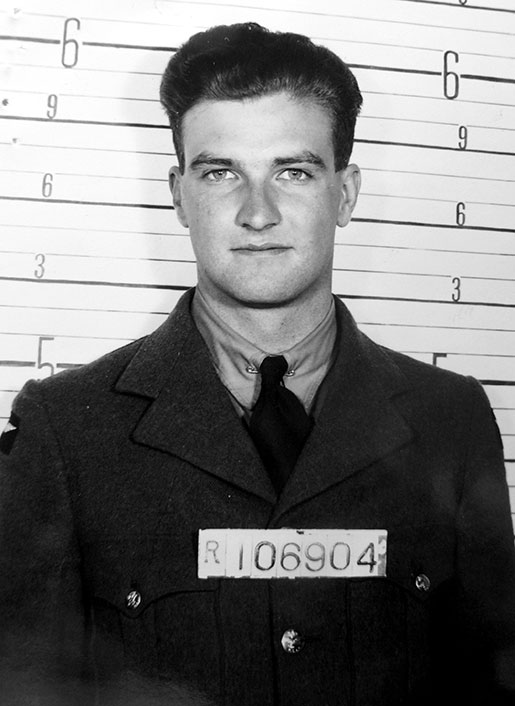 Canadian Flying Officer Alfred W. Dungate was among those killed in a crash on Oct. 25, 1943.
PHOTO: COURTESY HUGH A. HALLIDAY

On Jan. 13, 1944, FO William Armstrong of Summerland, B.C., another Wellington pilot—this time in No. 172 Sqdn.—made three deadly runs on U-231 in the face of angry flak which wounded his rear gunner. Armstrong’s successful crew included two other members of the RCAF and one of the RNZAF.

The final sinking achieved by an Azores-based aircraft was on Sept. 26, 1944. The victim was U-871, a supply submarine which was to refuel U-boats already at sea. By this time No. 206 Sqdn. had converted to Liberators and returned to England, bequeathing its “Forts” to No. 220 Sqdn. The German sub was hunted by three of No. 220’s Forts. For much of the time U-871 was running submerged, but FO Alex Paruk of Lamont, Alta., the RCAF co-pilot of one aircraft, spotted the periscope wake and a devastating attack followed. Besides Paruk, the crew included two other Canadians.

In December 1944, No. 220 Sqdn. also switched to Liberators. The last RCAF casualty in the Azores was FO Harry D. Laronde of White Rock, B.C., a navigator. He died when Liberator KG913 crashed soon after taking off for an air/sea rescue mission on March 8, 1945. Of the 10-man crew, two survived with serious injuries, including Flt. Sgt. H.R. Dobbie, a Canadian wireless operator/air gunner.

Although the RCAF personnel were the most visible Canadians present, a number of CAN/RAF aircrew were sprinkled through the units. These were Canadians who earlier had enlisted in the RAF. Among them was Squadron Leader Anthony J. Pinhorn of Hamiota, Man., a Fortress captain in No. 206 Sqdn. and a seasoned Coastal Command veteran. On Jan. 6, 1944, he damaged U-270 sufficiently to force it back to base, but he was in turn shot down by the submarine. The nine-man crew, commemorated on the Runnymede Memorial, included two members of the RCAF. Warrant Officers Donald L. Heard of Peterborough, Ont., and Oliver A. Keddy of Kingston, N.S., both wireless operator/air gunners.

One of the more surprising aspects of the RCAF presence was the relative paucity of radar personnel, a trade that was often over-represented in the Lost Legion.

Nevertheless, Flt. Lt. William McFaull, a former banker from Regina, headed the Radar Section at Lagens from the beginning. Not content with training set operators, he flew as crew on at least 15 sorties and participated in two attacks on submarines. He was awarded an MBE (Member, Order of the British Empire) in June 1945.

All Posts
PrevPrevious ArticleKilling MiGs In Korea
Next Article70th Anniversary of D-Day, 1944-2014Next