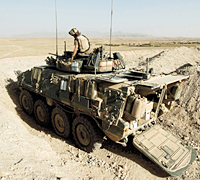 A soldier from 1 Princess Patricia’s Canadian Light Infantry does sentry duty from a LAV III at Forward Operating Base Robinson near Kandahar.

The first contingent of Canadian soldiers assigned to duty in the Kandahar region of Afghanistan is now back and a second rotation to that battle-scarred area is under way. Last spring the government of Prime Minister Stephen Harper secured a parliamentary mandate to extend the Kandahar mission to at least 2009.

The Kandahar mission has turned out to be every bit as dangerous as Chief of the Defence Staff General Rick Hillier and former minister of National Defence Bill Graham warned Canadians it would be when they toured Canada in the spring and summer of 2005, just after the deployment announcement. As of mid-September, more than 30 Canadian soldiers have been killed since the deployment of the battle group led by the Princess Patricia’s Canadian Light Infantry. Eight of those casualties were in August alone. It is not too early to begin to arrive at some conclusions about the nature of this war that Canada has chosen to fight alongside its North Atlantic Treaty Organization partners in the southern regions of Afghanistan.

First, and most important, this war resembles almost every other insurgency that soldiers have fought since the beginning of time. Put simply, the old lessons about how to fight an insurgency are still the best.

This realization probably comes as a sobering reminder to those defence analysts, military experts and soldiers who had become enamoured by concepts such as the revolution in military affairs, much touted in the late 1990s, and transformation–a more recent sobriquet–that war is still pretty much the same, regardless of the marvels of 21st century technology. It is still basically soldiers killing soldiers at relatively short ranges.

In Afghanistan, Canadians have been killed by roadside bombs, suicide bombers, ambushes and plain old fire fights between themselves and Taliban armed with assault rifles, machine-guns, rocket-propelled grenades (a World War II development) and improvised explosive devices. A shockingly large proportion of them have been killed while travelling in convoys. How much of our road movement is really necessary?

In these sorts of fights, digital data uplinks, network-centric communications, remotely piloted vehicles, etc., may well help on occasion, and certainly no modern army should do without them. But Canadian infantry battalions would probably be better off if they had their scout platoons and mortars back so that they could resort, when necessary, to their own mortars and their own explosives when digging out insurgents.

Second, a war such as this one is inherently a struggle of set-piece battles. Each attack on a Taliban stronghold, whether it be a house or a small village, is another set-piece attack. Thus good old fashioned artillery–which the Canadian army was on the verge of dropping not too long ago–has come back into its own. So has close air support, although it seems to be a lot less available to the Canadian infantry than it ought to be.

Third, this war is showing once again that infantry must have sufficient direct fire support to allow them to dominate by fire, rather than by manpower or manoeuvre. The cannon on the LAV has proven invaluable, but even better would be a heavy-calibre gun such as the one on the Leopard tank or some other such armoured vehicle. Canadian experience in Afghanistan, American and British experience in Iraq, and Israeli experience in Lebanon are proving over and over that tanks, properly supported and protected by infantry, are vital in dealing with well-dug-in insurgents. True, Israel lost about 30 tanks to Hezbollah fighters armed with up-to-date Russian-made anti-tank rockets, but that was mainly because the Israel Defence Forces seemed to have forgotten how to properly co-ordinate infantry and armour.

Fourth, all of the discussion that has been going on since Somalia about how Canada must prepare its military leaders for the 21st century with advanced education, military ethics, etc., is true enough, but will go for naught if these new leaders do not understand that leadership at all levels must begin with compassion. Not a compassion that leads to casualty avoidance, but a compassion that is based on an empathetic understanding of what the lower ranks must endure in order to fulfil a commander’s intent. And one based on willingness to demonstrate compassion in ways that are usually little more than symbolic, but nevertheless crucial.

Fifth, at any given moment when Canadian troops are actually in contact with the enemy in Afghanistan, killing and taking casualties, the great majority of Canadians back home are living normally without any limit whatever on their ability to work, to play, to entertain, to attend school, to do anything that is part of normal life. There is nothing inherently wrong with this, except that every time Canada takes another casualty, the Canadian media restarts its chorus of “Why are we in Afghanistan?” At the same time new polls are published that show that support for the war is up a half a point this week or down a half a point the next.

Two governments, one Liberal, one Conservative, decided on this mission as a matter of vital Canadian national interest. If the current government doesn’t do a better job of selling this war–yes, war-to Canadians, it had better learn to ignore the polls. Or do the best job it can to reassure the troops out there that their presence and sacrifice has great meaning. There, too, this war resembles thousands of others that date back to the dawn of recorded time, and probably even earlier. 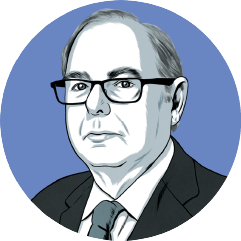 Author of the “Eye on Defence” column in Legion Magazine, is director of the Centre for Military, Security and Strategic Studies at the University of Calgary.
All Posts
PrevPrevious ArticleCanada’s New Special Ops
Next ArticleTask Force Afghanistan The Battle For The PeopleNext