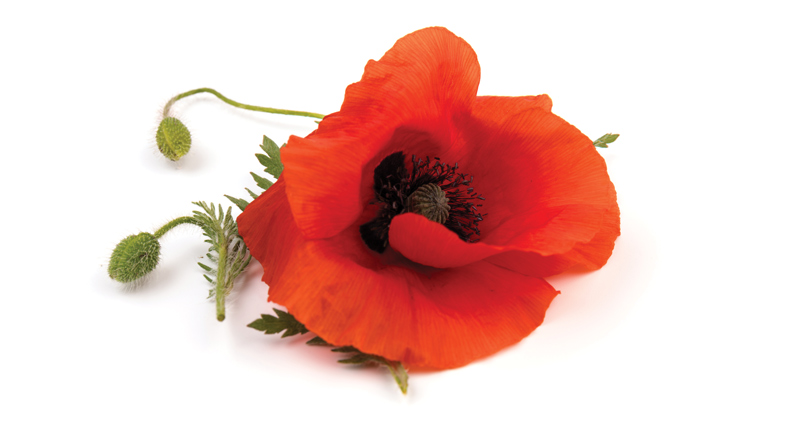 The bleak, muddy terrain of Western Europe during the First World War was trenched, scarred, bombed and cratered into oblivion. Tides of battle flowed back and forth across the front, and the ground and greenery were scorched by shellfire and poisoned by gas. Soldiers and horses, irretrievable, decomposed in the muck. It seemed nothing could exist here. Only death.

But amid the chaos and carnage, bright red poppies sprouted and blossomed in no man’s land and among the graves of the fallen. Soldiers grasped at the glimmer of hope they saw in the determined wildflower: if it could rise from the morass, they surely could too.

One soldier in particular—John McCrae, a Canadian doctor serving in Belgium’s Flanders region in 1915—was so moved by the battlefield death of a friend that he set that sentiment to poetry: “In Flanders fields the poppies blow / Between the crosses, row on row….” Once published, the poem passed from soldier to soldier and the concept of the poppy as a symbol of remembrance took hold.

American Moina Michael responded to McCrae with her poem “We Shall Keep the Faith” in 1918. “We cherish too, the Poppy red / That grows on fields where valor led / It seems to signal to the skies / That blood of heroes never dies.” She and her French counterpart, Anna Guérin, promoted wearing artificial poppies to commemorate the Armistice.

The red flower is synonymous with remembrance.

In 1921, the Great War Veterans’ Association of Canada, predecessor to The Royal Canadian Legion, decided the poppy should be worn in Canada every Nov. 11, on Armistice Day. With that, it launched Canada’s first poppy appeal in support of war veterans.

The red flower is synonymous with remembrance in the United Kingdom, Canada, Australia, New Zealand and the United States. In France, the bleuet de France, commonly called bachelor’s button or cornflower, is the flower of remembrance. In Belgium, a poppy or a white daisy is used. Newfoundlanders wear forget-me-nots. But the poppy generally prevails.

Over most of the past century, the Legion has found myriad ways to employ the poppy in fostering remembrance and supporting veterans and their families. It distributes some 20 million poppy pins annually via traditional donation boxes and the latest: tap-enabled donation boxes. It owns the trademark to the poppy image, sells poppy-themed products, projects a video image of poppies on the wall of the Peace Tower, and now, for the 100th anniversary, has produced the Immortal Poppy, limited-edition digital artwork originating from a real Flanders poppy scanned in 3D and “engraved” with the names of Canadian war dead.

This tenacious blood-red wildflower has come a long way from the time when the fields of Flanders were torn asunder. But it endures to remind us of the many sacrifices of war, lest we forget.