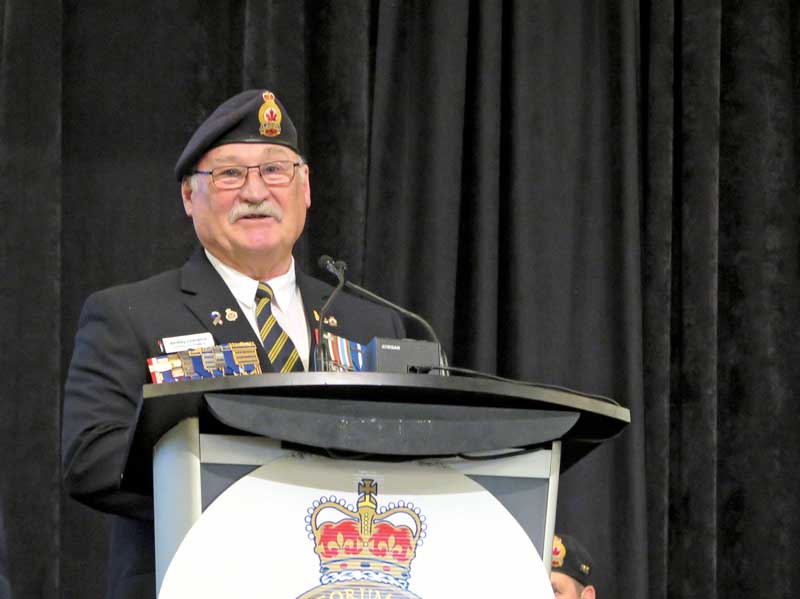 “The system was excellent, and it really was hassle free,” said Dominion Vice-President Berkley Lawrence, who conducted the elections and the installation of officers.

There were six nominees for two vice-president positions. “It took four votes and was completed in approximately 15 minutes, whereas using the scrutineers and paper ballots system, it would have taken well over an hour. My personal opinion was that it was great,” said Lawrence.

The convention went smoothly despite unco-operative weather that forced the parade indoors prior to the opening ceremonies. Wreaths were placed by community dignitaries, Lawrence and Command President Valerie MacGregor.

Lawrence declared the convention open after remarks highlighting several new national initiatives including the introduction of biodegradable poppies and wreaths, the expansion of the one-year free membership for the Legion’s Veterans Family Welcome Program to include parents and guardians of veterans, and advocacy on issues affecting Canadian Armed Forces members and those who helped them during the war in Afghanistan.

Lawrence also spoke about the Royal Commonwealth Ex-Services League, which supports 57 veterans and 62 widows in the Caribbean “in great financial need,” ensuring they get daily food and have access to funds to repair their homes. More than two dozen branches donated a total of $19,735 to the cause and another $1,700 was raised in cash from delegates.

As business sessions got underway, MacGregor reported that the command had welcomed its first new branch in 25 years—UBC Campus. Other developments since the last convention included: the donation of the building that housed the Fort St. James Branch, which closed prior to the pandemic, to the Ulh’goh Bi’yoh Native Friendship Centre Society; the development of a new five-year strategic plan; the launch of a new newsletter and updated website; and the announcement of plans by the Whitehorse Branch to build a new 75-unit residential complex, which will boast 10 units exclusively for veterans.

The command lost no branches during the pandemic thanks to more than $5 million in aid from Dominion Command and the federal and provincial governments, said treasurer Jim Diack.

He also reported that expenses were down, in part due to travel restrictions and the switch from in-person events to virtual meetings and training during the ongoing pandemic. Overall, the financial statement showed an excess of $965,335 in revenue over expenses for 2021. The biggest source of revenue is the per capita tax, which has not changed since 2016—making shrinking membership a financial concern, noted Diack.

“Command is always looking for alternative revenue streams to remain sustainable,” he said. One example—the Military Service Recognition Book—brought command $215,430 in income in 2020 and $303,624 in 2021.

Membership chair John Scott reported a decline in membership from 41,343 to 32,450. “However, our branches are just awakening from this long pandemic sleep,” he noted.

The pandemic also impacted the number of entries in the poster and literary contests, which dropped from 6,600 in 2019-20 to 4,295 the following year, reported committee chair Bev Croft. In 2021-22, however, submissions rebounded to 8,599.

Service officer Lori Castle reported that her bureau worked throughout the pandemic. It completed 368 applications to Veterans Affairs Canada during the past three years, processing more than $14 million in claims for pensions and compensation for pain and suffering for veterans.

Three presentations during the convention touched on how Legion donations are supporting veterans and their families, as well as first responders, in Canada and other countries.

Guest speakers Trevor Greene, formerly of the Seaforth Highlanders of Canada, and neuroscientist Dr. Ryan D’Arcy, described the innovative rehabilitation that has allowed Greene to walk again after an axe attack in Afghanistan damaged his brain.

That level of care will also be available to other veterans when the $312-million Legion Veterans Village Centre of Excellence opens in 2023 in Surrey.

D’Arcy, the centre’s chief scientist, said the project will provide integrated care and support services for veterans and first responders, as well as cutting-edge rehabilitation research. The project also includes housing—nearly 500 condominiums, including 92 affordable units in the first phase. The initial offering sold out quickly, allowing work on the second phase to start sooner than expected.

Meanwhile, Tim Laidler, board president of the Veterans Transition Network (VTN), told delegates about how that organization got involved in aiding refugees who helped the Canadian army during the war in Afghanistan.

As the Taliban took over Kabul, “VTN was fielding hundreds of e-mails” from veterans offering donations to help people they knew in Afghanistan get out of the country. The donations, including from the Legion, “allowed us to quickly take action.”

Laidler and his wife Jamie, who both went overseas to facilitate the work, talked about VTN’s efforts over the past year to provide emergency safe houses, aid with evacuations and help refugees settle in Canada.

Now, “2,000 Afghans are fully transitioned to living in Canada,” Laidler said. The VTN has closed its donation campaign and the new UBC Campus Branch has been recruited to help with refugee resettlement. 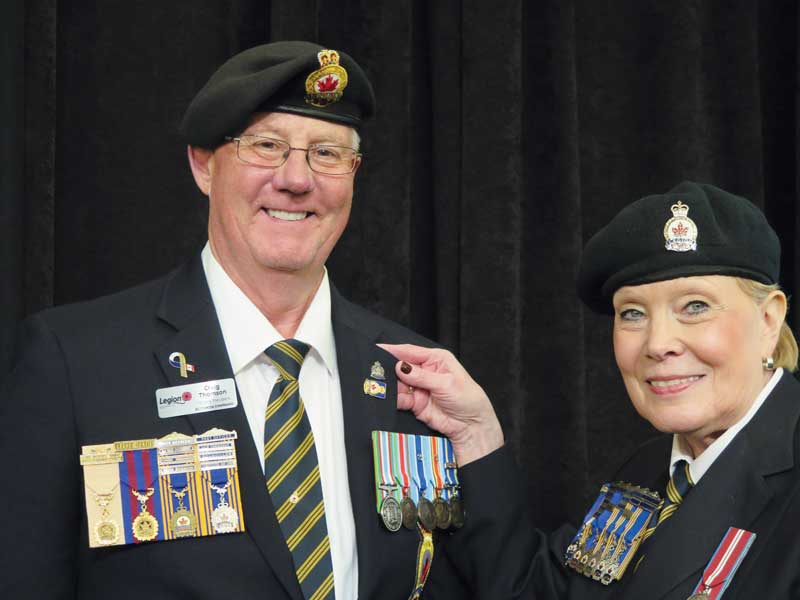 In other business, delegates voted to request Dominion Command include acknowledgement of traditional Indigenous land in the procedure at the
opening of Legion meetings. Also, two non-concurred motions were brought back to the floor and created much debate.

One, which called for holding provincial Legion Week in June when branches can hold events outdoors, was approved. The second, recommending a modified wreath to honour First Nations veterans, was defeated. Some speakers said there should be no distinction among veterans. Others argued a wreath’s ribbon can be used for such purpose.

The elections, with the new electronic system, went smoothly and quickly. There were 207 accredited delegates carrying 285 proxy votes.

It took four rounds of voting to elect vice-presidents Karen Kusek of Mission Branch and Dale Johnson of Cloverdale Branch in Surrey. Bev Croft of North Vancouver Branch, Terri Orser of Esquimalt Branch, Pete Pearson of Valemount Branch and Danny Reddon of Shalom Branch in Vancouver were unsuccessful in their bids for the position.

Treasurer Jim Diack of Qualicum Beach Branch was returned to office over contender Denise Young of Dawson Creek Branch, while Gary Peters of Seaview Centennial Branch in Lantzville prevailed over Past President Glenn Hodge for the position of Chair.

In a separate proceeding, delegates voted to appoint Dave Sinclair honorary president. A member of Britannia Branch in Victoria, Sinclair is a command past president, past president of Legion Manor and recipient of a Minister of Veterans Affairs Commendation, among other distinctions.

“I am overwhelmed and deeply honoured,” said Sinclair. “For my name to be mentioned in the same breath [as previous recipients, including Victoria Cross recipient Smokey Smith] is a huge honour.”