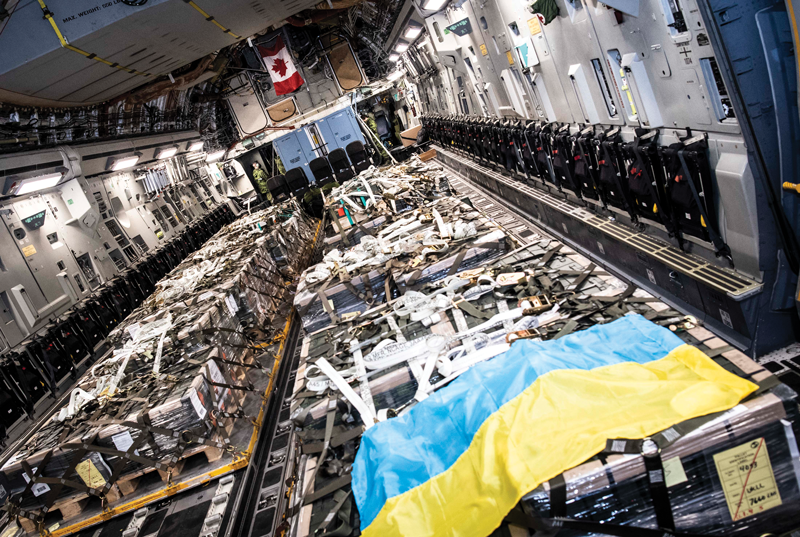 Why Canada should respond to global threats

Primordial violence, hatred and enmity. Carl von Clausewitz called these necessities for war the “paradoxical trinity” in his renowned book, On War.

American army Colonel Harry G. Summers borrowed heavily from On War in his 1982 book, On Strategy: A Critical Analysis of the Vietnam War to explain why the U.S. lost in Vietnam. Summers distilled von Clausewitz’s trinity to people, government and armed forces. In Summers’ interpretation, the people provide the emotion that permits the violence of war, the government—acting on the basis of popular opinion—organizes resources for war, and the military moulds the resources into fighting forces and deploys them to battle.

There have been several objections to Summers’ reduction of von Clausewitz’s formula, but Summers’ take can help explain the holy mess that is Canada’s modern defences and why the government was slow to provide significant military support in the form of lethal weaponry to Ukraine in the early months of the crisis.

Russia invaded Ukraine in February with substantial military force, breaking decades of norms in international relations. As Ukraine is not a member, NATO chose not to activate its collective defence mandates, limiting its ability to aid the country. (The organization had sent military trainers to Ukraine, including a few hundred from Canada, but all were withdrawn before the invasion.)

NATO countries, including Britain, the U.S. and the Baltic states, had sent anti-aircraft missiles, anti-tank missiles and other lethal weapons to Ukraine prior to the attack, but Canada refused. Afterward, Germany, Australia and other NATO members sent similar weaponry to Ukraine.

Before the war, Canada had initially offered Ukraine a loan of $120 million, not to be used for weapons, then increased the number of training personnel from 200 to 300 and sent non-lethal aid such as bulletproof vests and night-vision goggles. After the invasion, Canada offered an additional $500-million loan and dispatched 460 additional personnel to Latvia (a NATO member) to bring Canada’s total contingent there to 1,000. Nearly a month into the conflict, Canada finally sent lethal aid to Ukraine—about 100 anti-tank weapons and 2,000 rockets.

Meanwhile, NATO and NATO-aligned countries stepped up their preparedness. Germany, typically slow to increase military spending, significantly boosted its defence budget to align it with the NATO guideline of two per cent of GDP.

There, in a nutshell, is the root of Canada’s defence dilemma. The government just won’t step up to global norms on military funding. Defence spending remains near all-time lows. Either Canada can’t afford better or it’s not a priority.

Canada is a nation of 38-plus million people with the 10th largest economy in the world, but it only spends about 1.4 per cent of its gross domestic product (GDP) on defence.

Australia, in comparison, has a population of 25 million and the 13th largest economy on the planet, yet its defence spending is a little more than two per cent of its GDP.

This proportion of spending may be due to Australia’s uniquely dangerous place in the world, given its proximity to China. But Canada has threats of its own, with Russia across the Arctic Ocean, the vulnerable North and diplomatic spats with China.

Canada went to war to save Europe in 1939; to save South Korea in 1950. It should be of great interest to the country if its allies are forced into war by belligerent autocracies. The Cold War is back with a vengeance and Canada needs to mobilize as it did in 1951.

At present, Canadians aren’t emotionally willing to condone violence. But the government has a responsibility to lead in matters of defence. The prime minister and his cabinet should shoulder responsibility for the defence of Canada, its people and its interests.

When al-Qaida attacked the U.S., Prime Minister Jean Chrétien—not known for an interest in the military—sent Canadians to fight in Afghanistan. Paul Martin did likewise and Stephen Harper followed where they led. And although the war was eventually lost, Canada did what it could and did not hold back.

Today, Canada has no practical response to the hard realities of competing world powers, some of which are autocracies led by men who are endangering global peace and Western interests.

In response, Canada largely ignores its defences again. Canada can do better. Its allies expect it to.