Home » Our Veterans » Memoirs » Beyond Words 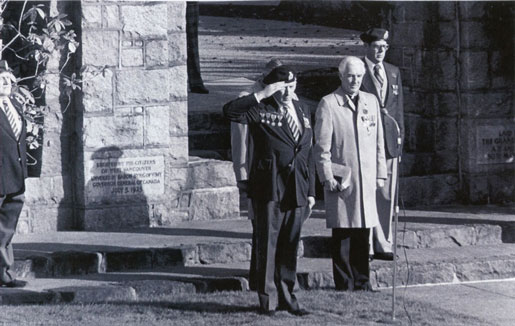 Driving across the fog-shrouded Lion’s Gate Bridge to West Vancouver on Remembrance Day morning, I heard six high school radio debaters discuss the possibility of Canada ever having to fight another war. Their consensus that contemporary youth are too self-oriented to fight would have raised more than a few bitter-sweet smiles from the veterans of West Vancouver Branch.

Sprawled along the coast between the Pacific and the last mainland stretch of the Trans-Canada, West Vancouver is a small-town corner of the metropolis. Little shops line the main street, broken occasionally by compact shopping centres, and in keeping with this atmosphere the veterans’ parade formed in the Safeway parking lot.

They began arriving singly on foot shortly before 10, warmly greeting those ahead of them, but soon tiny groups were filing down side streets to the plaza. There were handshakes, smiles and friendly jibes of “Closed the bar down last night, eh, Johnny” all around. Several proudly pinned on long bars of medals, and one 87-year-old WW I campaigner stood quietly embodying the term “ram rod straight.”

The mid-morning sun had melted the last remnants of mist and the day was crisp and clear as the color party formed. From across the street the tentative first notes of the West Vancouver Boys and Girls Band brass section fluttered and fell. The band moved in front of the police barricade and came to a parade rest before the post office. Following commands learned by rote years ago, the legionnaires fell in behind and moved out.

Dogs and small children kept stride with the men down main street to the memorial park. Three hundred townsfolk crowded the front of the municipal library, waiting. The men moved into place smartly, many with proud eyes on loved ones in the crowd.

A rock cenotaph arched over the entrance to the park. The official party gathered under it to lead the men in worship. Somehow, in small groups, the remembrance ceremony becomes more meaningful. The nervous, faltering notes of a cadet’s Last Post are more poignant, the children’s hushed questions during the dead silence more real.

A shattering rifle salute echoed between the mountains and a ridge of concrete high rises, answered eerily by a bewildered child’s cries. As the last of the shots sounded through the valley a lone girl began to pipe a Scottish lament, and Reveille broke the crowd’s stark silence.

There is something beyond words in the faces of veterans as they watch wreaths placed to honor their comrades. In some you can trace the years and the memories – good and bad; in others the fear and pain of another era is all too clear. Others cannot be read at all. But one could not help but be moved by the pride and sorrow of these men. As they moved off in formation behind the band, the crowd broke into spontaneous applause. Not that type of applause that follows a performance, or a well-placed pause in a skilled politician’s speech, but that type of applause that tightens your throat and averts your gaze. A young blond boy unselfconsciously saluted as the legionnaires passed.

Many in the audience paused after the ceremony to solemnly place their poppies on the grassy apron of the cenotaph. One man, too young to have fought but old enough to remember, placed the poppies of his many children one by one, pausing reverently after each as though reflecting on the spilled blood they represented.

Others stayed behind in the memorial library across the street to read the lists of those who left communities like this behind forever. Like many small Canadian towns, West Vancouver seemed to have given up far more than its share of young people.

The legionnaires, walking lighter now – some playfully razzing others who had fallen out of step – paraded back to the branch for their annual open house. Hot rum took the chill off the day and started the memories flowing.

As time passes I plunge deeper in to the mystery of war. Growing up in the sixties, I reflected the blind, youthful attitude that Remembrance Day and all other signs of war should be obliterated. As I met veterans, though, and began to think rather than react, I ceased my stereotyping and started to search for understanding. Perhaps it is most difficult for those who have never fought to comprehend how war for a young person could be both the best and worst time of their life.

For many, of course, particularly in the innocent days of WW I, it was the first great life experience: “We’ll go over and beat those Germans and be home for Christmas.”

For others, it was a sense of duty: Not so much a conscious sense of patriotism (a term that has received much denigration), perhaps, but a feeling of common purpose with one’s peers. The bonds of comradeship forged in war last forever. I still feel a touch of envy when I hear veterans speak of friendships struck in wartime that are solid through the years, and memories of fallen mates that remain fresh and alive.

The memories certainly seemed fresh for the 87-year-old veteran. He had proudly stated his intention to march to the cenotaph, sighed that there were few of his buddies remaining but declared that he was good for a least a few more ceremonies.

I stared hard after him, imagining him as a young man with hopes and goals, fighting in the deadly mud of France. It is far too easy to forget that our elders were once filled with dreams and the determination to live a good life, only to be thrust wholly into an uncompromising situation. No one wants to die, and very few want to kill. If the radio debaters could see the veterans reminisce with old friends or escape into song for a few brief moments by a piano with a glass of hot rum and the satisfaction that they faced a challenge and survived, they might not judge them harshly as a generation apart.

PrevPrevious ArticleThe Battle For Panjwai: A Soldier’s Story
Next ArticleAdrift With DeathNext