Home » Canada Corner » Home Front » A league of her own

A league of her own 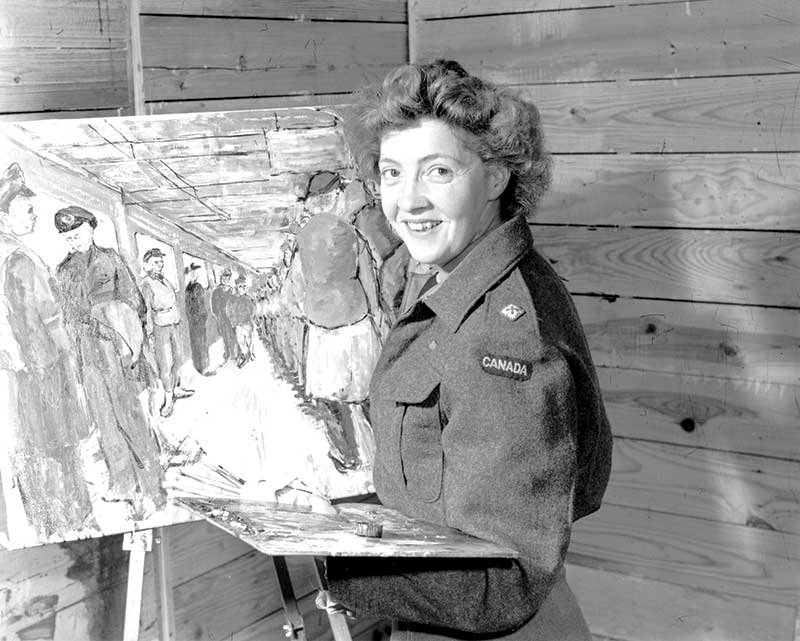 During the Second World War, the Canadian government officially appointed 32 war artists—but only one was a woman. Her name was Molly Lamb. Born in British Columbia and the daughter of celebrated photographer Harold Mortimer-Lamb, she was exposed to art and famous artists at an early age. Indeed, she longed to be a painter like family friend A.Y. Jackson, a member of the Group of Seven.

With that in mind, Lamb studied art under Jack Shadbolt at the Vancouver School of Art, now the Emily Carr University of Art + Design. He encouraged her artistic practice and they became lifelong friends. Lamb Bobak and her husband, Bruno, also a war artist, married in December 1945. Lamb Bobak kept a diary after she joined the Canadian Women’s Army Corps. As an official war artist, she painted scenes of the conflict’s aftermath, such as Ruins, Holborn Street, London, 1945 and Bremen Ruins at Night, 1945.
LAC 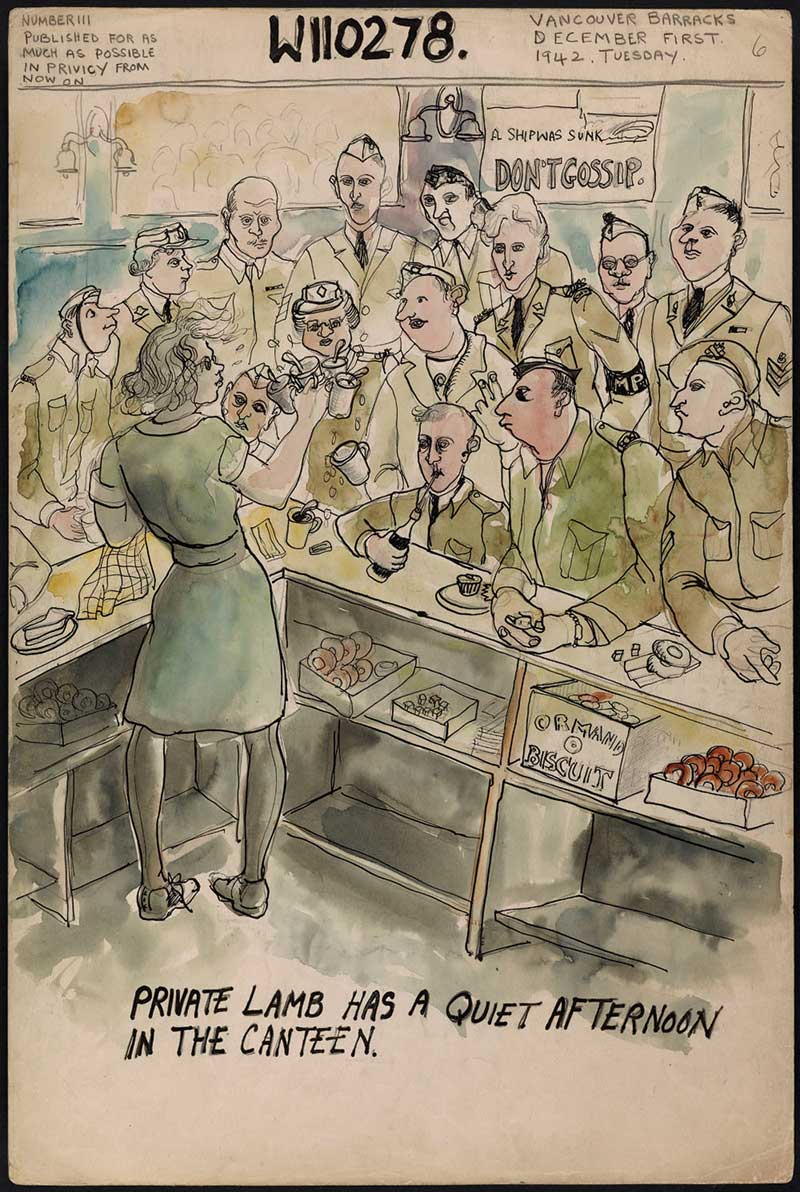 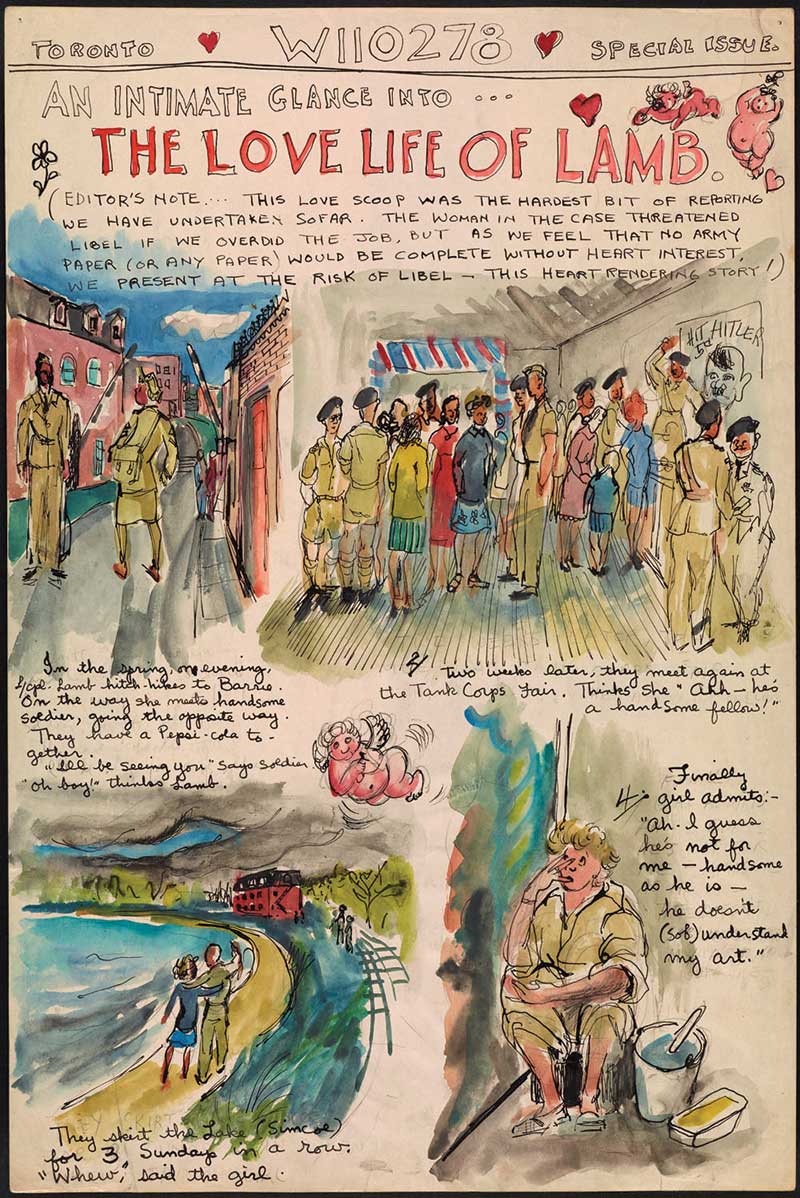 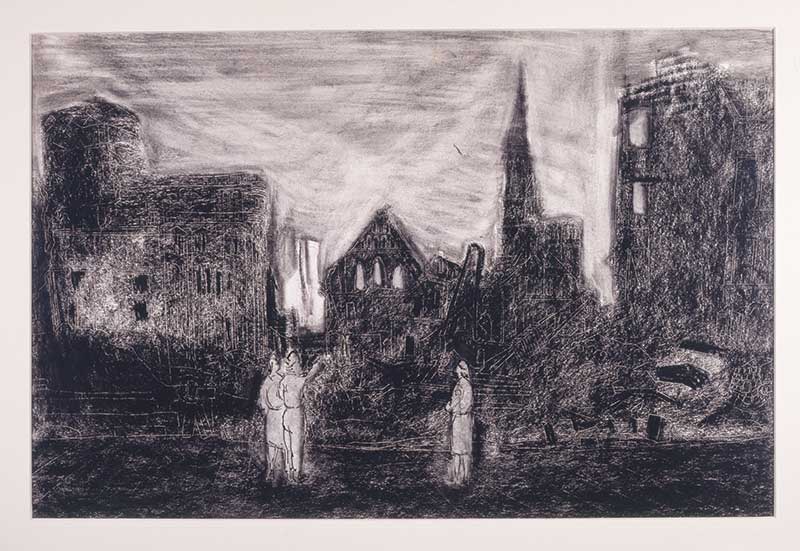 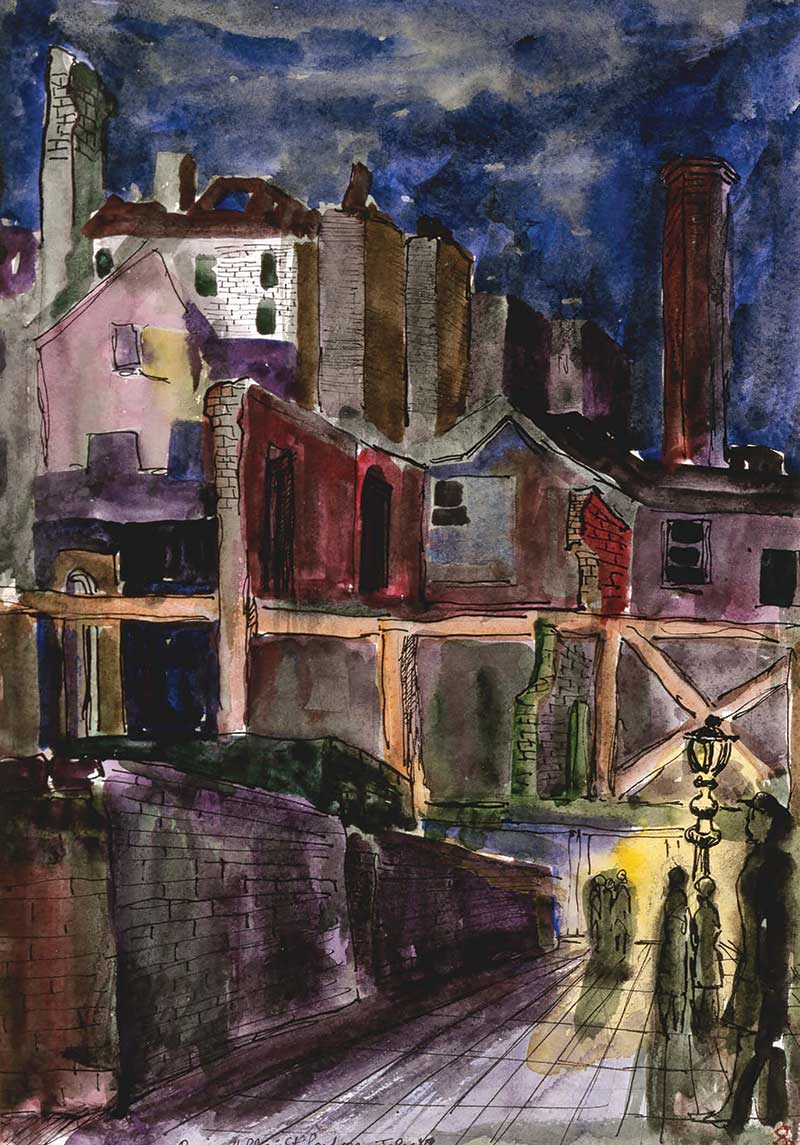 After graduating in 1942, Lamb had her first solo exhibition at the Vancouver Art Gallery. That same year she joined the Canadian Women’s Army Corps (CWAC) as a private. During that time, Lamb kept a diary, with illustrations recording the work of servicewomen aiding the war effort in Canada.

At the start of the Second World War, Canada had no official war art program. But by 1943, the Canadian War Artists’ Committee was established, thanks largely to future governor general Vincent Massey and Harry Orr (H.O.) McCurry, the director of the National Gallery of Canada.

Lamb lobbied to become an official war artist, even hitchhiking from Toronto to Ottawa once to meet with McCurry. In 1945, her push came to fruition and she was promoted to the rank of lieutenant.

As a woman, she was not allowed to go to the battlefields like her male counterparts. Instead, she was posted to places in Canada where, through her sometimes humorous paintings, she documented the daily activities of women on the home front.

Six weeks after VE-Day, Lamb was finally sent overseas and she painted scenes of the aftermath of the conflict. She travelled throughout England, the Netherlands, France and Germany, creating paintings such as Ruins, Holborn Street, London, 1945 and Bremen Ruins at Night, 1945.

It was during this trip that Lamb met Canada’s youngest war artist, Bruno Bobak, 21, in London. Returning to Canada in 1945, they married, settling briefly in Ottawa. But when Lamb Bobak became pregnant the following year, the army discharged her for “medical reasons.” The couple moved to B.C. to be closer to Lamb Bobak’s family. They both taught at the Vancouver School of Art.

By the 1960s, the Bobaks had moved to Fredericton. There they both taught art at the University of New Brunswick (UNB). Patricia Roberts-Pichette, a biology professor and the only female in the science faculty at UNB, met the pair and took lessons from them in 1960-61. “I loved their classes,” she said.

“We launched it together at a bookstore in Fredericton,” Itani recalled. “The book pretty much sold out in the first couple of days. Her wonderful illustrations, displayed at the book launch, sold immediately.”

Lamb Bobak also did illustrations for Itani’s third book of poetry, A Season of Mourning.

“I was living in Ottawa then,” said Itani. “She was still in Fredericton, but agreed to come to Ottawa by bus for a winter launch at Food for Thought Books. People lined up down the street for a block to meet her and get her signature.”

As a war artist, Molly Lamb Bobak’s paintings often documented the destruction war left behind. Others such as Arrival, City Hall, CWACs on Leave in Amsterdam, September, 1945 and Gas Drill, depict crowd scenes.

Lamb Bobak once wrote about her wartime paintings: “The whole structure of my army life is agreeable to a painter and everywhere you turn there is something terrific to paint. There is endless material in one barracks alone, though one could spend hours at the desk in the main hall, drawing the C.W.A.C.s checking in and out, the new recruits, the fatigue girls in their overalls, the orderly officer.”

In her book, Molly Lamb Bobak: Life & Work, Michelle Gewurtz noted that the artist said her days in Europe were “six of the richest and most exciting weeks of my life.” 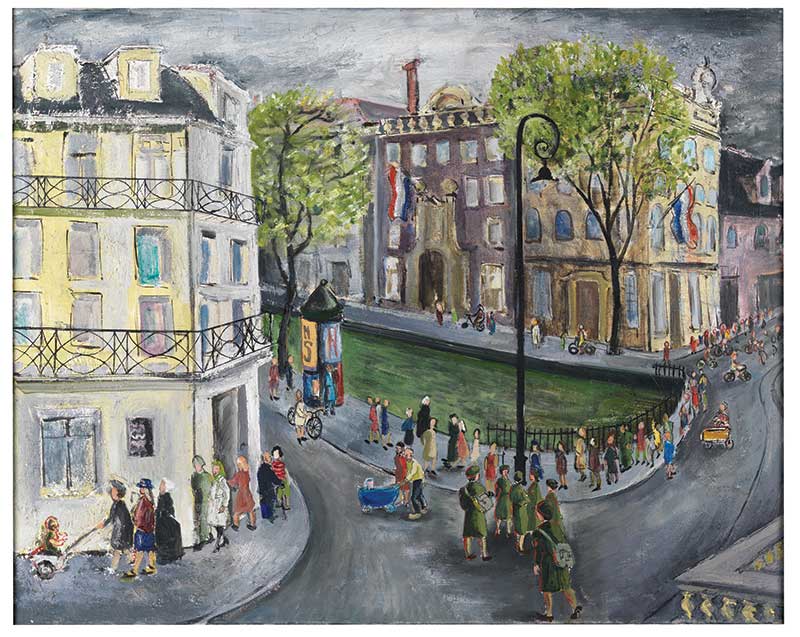 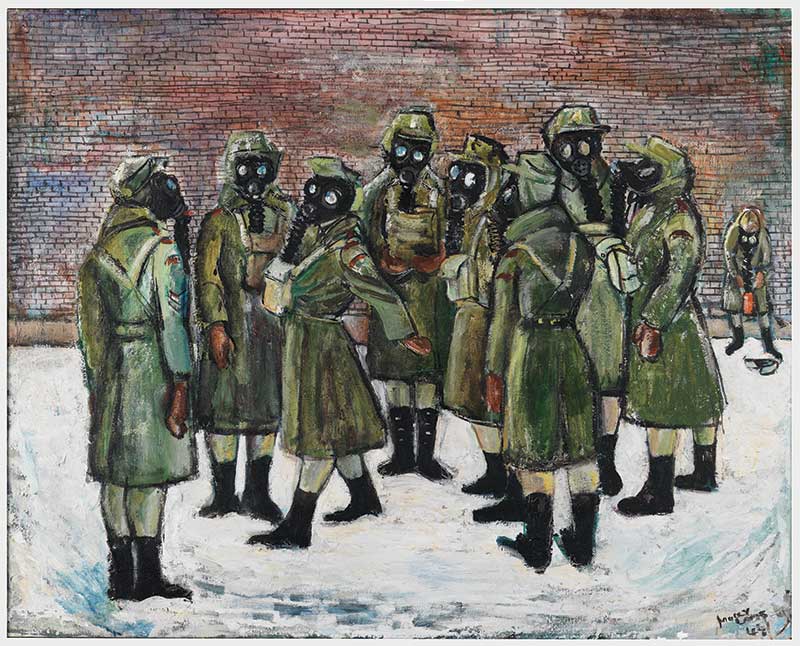 In 2000, Lamb Bobak illustrated the book, A Tale of Merlin the Billy Dog, written by her daughter Anny Scoones, and in 2004 Lamb Bobak and her husband illustrated another of Scoones’ books, Home: A Heritage Farm.

Roberts-Pichette received annual Christmas cards created by the Bobaks, as did Itani, who “treasures every one of them.” Both also own some of Lamb Bobaks’ paintings—cherished artworks from a war-art trailblazer.

There have been numerous exhibitions of Lamb Bobak’s work, and her art appears in galleries and private collections across Canada and around the world. Lamb Bobak’s war art often depicted crowd scenes, such as November 11, CWACS on Leave in Amsterdam, September 1945 and Gas Drill. After the war, she did illustrations for her daughter’s book , Christmas cards for friends and family and painted flowers and landscapes.
Pagurian Press

As a private citizen after the war, crowd scenes continued as a theme of Lamb Bobak’s work. One painting, a Prince Edward Island beach scene called Tea Hill, was reproduced on a stamp in 1982. After moving to New Brunswick in 1960, flowers became another theme in her works. Although primarily known for her art, Lamb Bobak was also a teacher, printmaker and author. 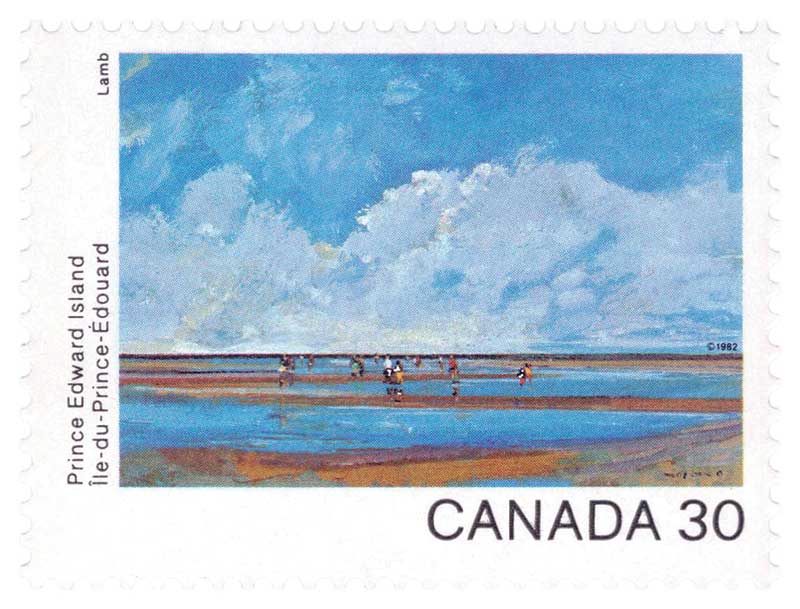