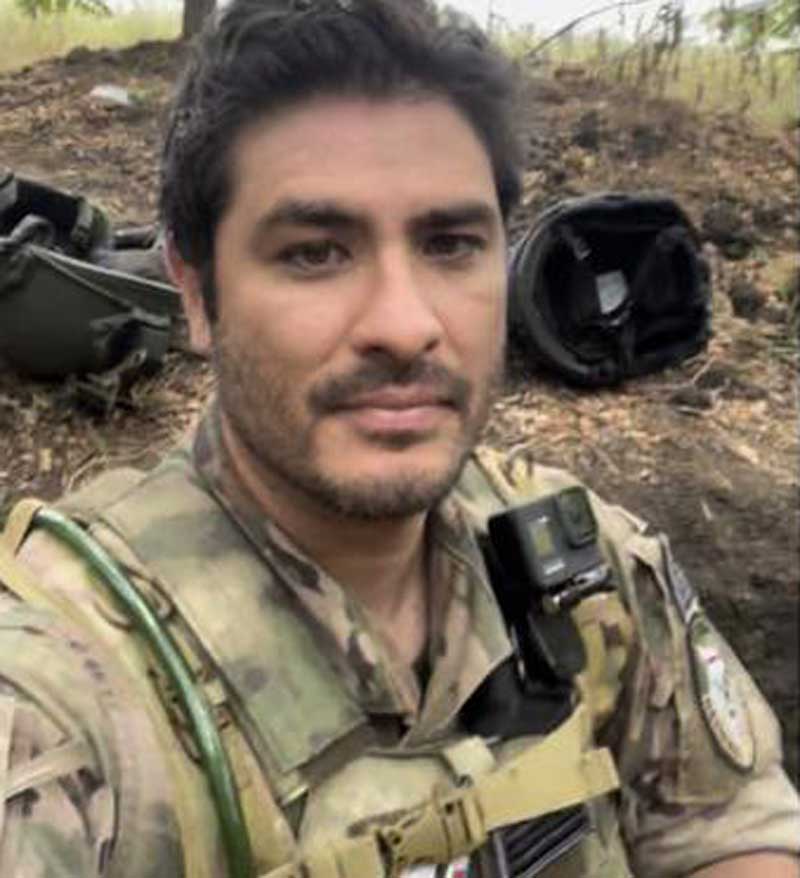 War Santa, a 36-year-old former U.S. Air Force sergeant, is photographed in a Ukrainian trench. He works anonymously from his home in Texas to funnel specialty gear to Ukrainian soldiers, Americans and other foreign fighters.
War Santa
Working out of his home in Texas, a former United States Air Force sergeant is making a list and checking it twice. He calls himself War Santa and he already knows who’s naughty and who’s nice.

Working anonymously, War Santa exploits the knowledge and connections he made working in military intelligence to procure equipment and deliver it to Ukrainian soldiers, Americans and other foreign fighters in Ukraine.

Polish volunteers provide vital assistance in getting some of the more sensitive military supplies through the Polish-Ukrainian border. 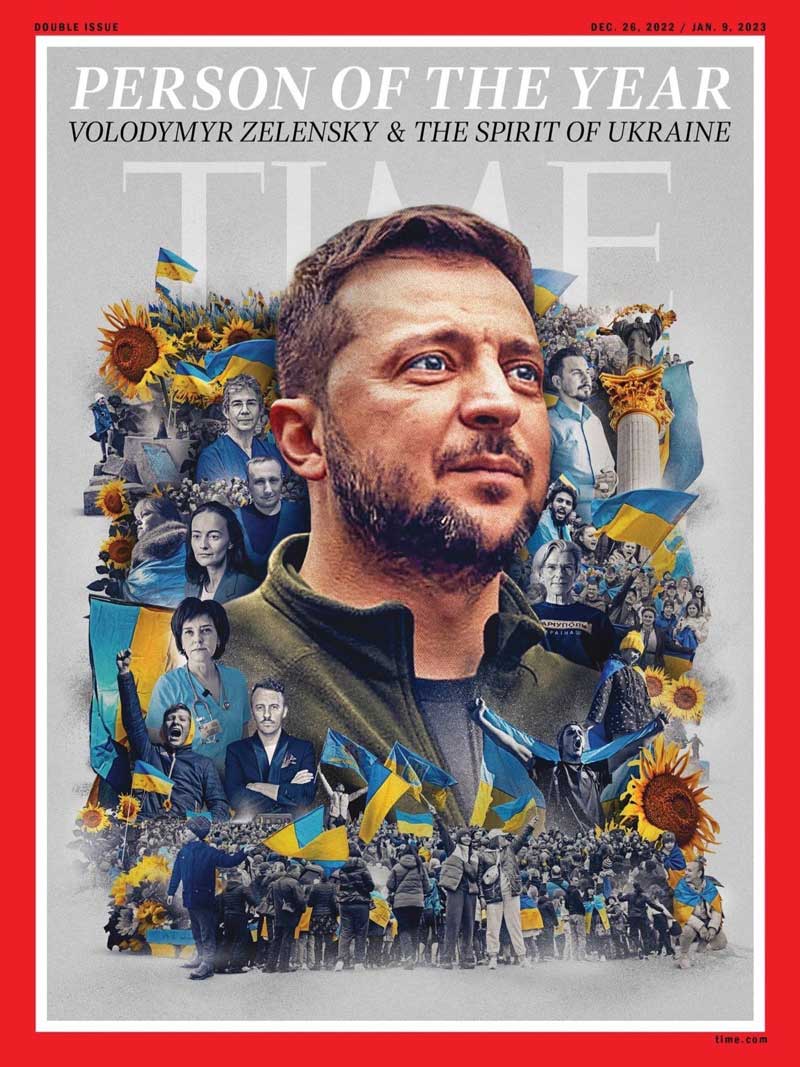 Volodymyr Zelenskyy was chosen as Time magazine’s 2022 Person of the Year.
Twitter/Defense of Ukraine
“What I take in isn’t necessarily humanitarian; it is to help out the warfighter and help them do their job as if they were properly outfitted in the U.S. military,” War Santa told the American military newspaper Stars and Stripes.

“The U.S. government and Poland and Ukraine give soldiers specialty equipment on top of the basic gear, but there’s a lot of stuff that they don’t get so that’s where we’re going to meet those needs.”

War Santa started the equipment runs to help a friend fighting in the Georgian Legion, a group of foreign volunteers formed by ethnic Georgians. He branched out as word of his deliveries spread. Only a few people, including his boss at an investment bank—another veteran—know his identity.

And War Santa wishes to keep it that way.

Russian troops, who’ve gained a reputation for brutality if not skill, have been dubbed orcs.

Western aid has kept the Ukrainian military outfitted with heavy weapons and other munitions since Russia’s invasion last February. Canada has committed more than $1 billion in military aid such as training, equipment, fuel and medical supplies—even thermal blankets and sleeping bags.

Morning Pikachu Dance. Winter has never been an obstacle to a good mood.
🎥 by Operative #UAarmy pic.twitter.com/B5efM39lcT

A female member of the Georgian Brigade dances while gunfire echoes. [Defense of Ukraine/ Twitter]

(Overall, Canada has committed $3.4 billion in general assistance for Ukraine.)

But supply gaps remain among individual fighters and units who rely on private donations to meet their needs.

Fundraising pays for much of the donated gear, but War Santa and Issac Olvera, a former U.S. Marine Corps infantry major who’s now advising Ukraine’s armed forces, also have contributed tens of thousands of dollars to the effort.

They said they fill a unique niche, obtaining pricey, sophisticated equipment for units that don’t have enough of it to go around.

“Coming to Ukraine, especially coming from the U.S.—a very well-funded military—one of the biggest shocks was the shortage of equipment,” said Olvera, an Iraq/Afghanistan vet.

Olvera, 41, said he quit his job in management consulting and left Texas in March to fight with Ukraine’s legion of foreign fighters out of a moral and patriotic duty. He said he felt compelled to defend the cornerstones of Western democracies: rule of law, free and fair elections, freedom of speech and freedom of assembly.

“I thought it was unfair for Ukraine to fight for these values alone,” he said.

The commander of the Georgian Legion, Mamuka Mamulashvili, said his 1,300 fighters lack thermal- and night-vision goggles. The unit, created in the aftermath of Russia’s incursion into Ukraine’s eastern Donbas region in 2014, obtains much of their own equipment via Twitter and rely heavily on private donations.

“We’re trying to do it ourselves and concentrate [on] as many useful items for the guys as we can.”

Amid appeals for support and videos of dancing Georgians outfitted for war, the unit’s Twitter profile declares that it is “defending the innocent from the [Russian] aggressor, the howl of our wolves has put fear into orcs since 2014.”

Russian troops, who’ve gained a reputation for brutality if not skill, have been dubbed “orcs” after Tolkien’s brutish, aggressive, ugly and malevolent race of soldiers who serve the Dark Lords.

There’s a photograph on the Georgian Twitter feed of what it says is a “captured Russian ‘tiger’ armored vehicle now it serves Georgian Legion thou its sh*t.”  The poor punctuation and spelling are theirs.
Topping Ukrainian fighters’ wish lists are reconnaissance drones, night-vision goggles, secure communications radios, vehicles and high-quality, cold-weather gear.

“Getting them into Ukraine can be tricky and dangerous,” reported Svetlana Shkolnikova for Stars and Stripes. “Time-consuming paperwork is needed for sensitive items such as drones, and transporting certain equipment—firearm magazines, hard-body armor—can violate export control laws set by the U.S. State Department’s International Traffic in Arms Regulations.

“Volunteers do their best to stick to official rules and regulations, but the urgency of their cause sometimes requires creative alternatives. Drones, scopes, thermal-vision goggles and other sensitive items have crossed borders in bundles of clothes or, more often, buried in pet food because ‘it smells, so no one checks.’”

An award-winning journalist, editor and photographer. He has reported on the downfall of South African apartheid and from war fronts in Kosovo and Afghanistan.
All Posts
PrevPrevious ArticleCivilian death toll, Russian war crimes soar in Ukraine
Next ArticleMisery, optimism and homesickness: WW II Christmas lettersNext