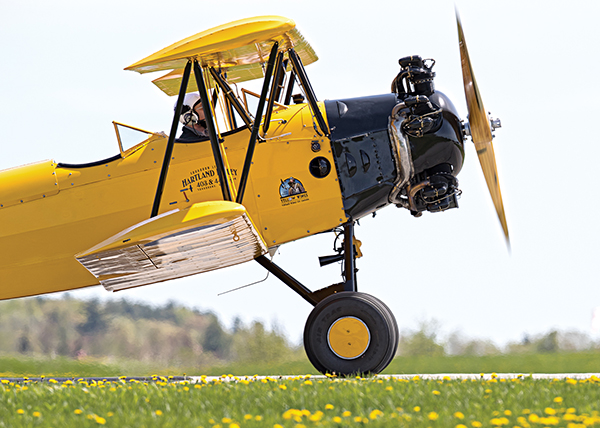 At their most essential, they are wooden or tubular alloy skeletons wrapped in paper-thin fabric or sheet-metal skins—riveted tin cans powered by internal combustion engines, driven by propellers and flown on a wing and a prayer.

Belching fire and smoke, coughing and kicking as if in protest at being awakened from slumber, they come to life. Tentatively at first, they rise, shaking their earthly bonds with growing assuredness to finally sing and soar and dance like divas among the clouds. 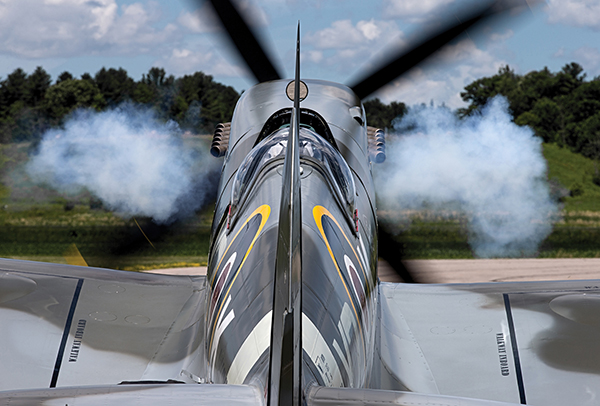 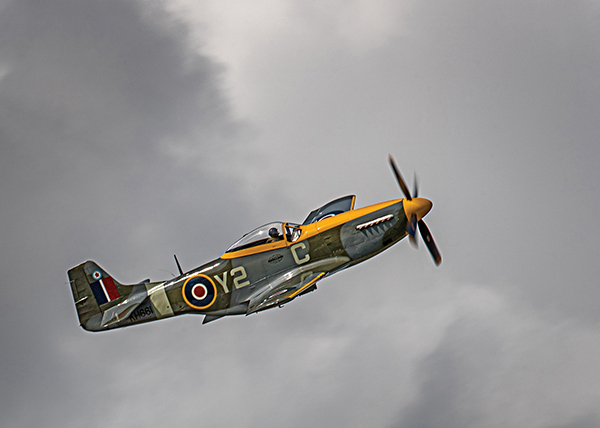 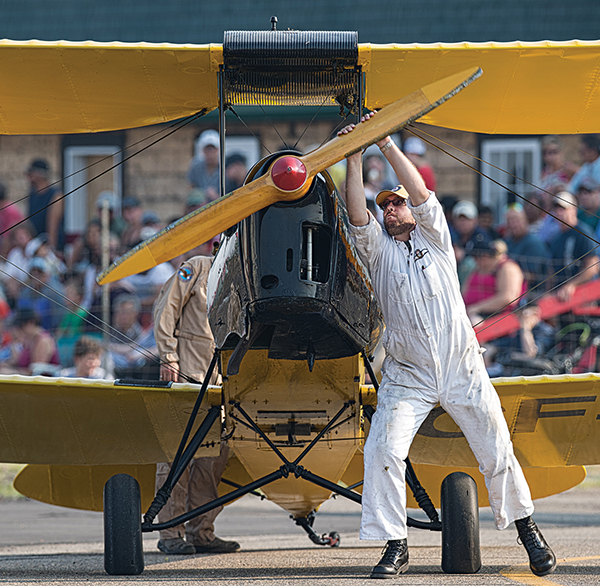 An aero-tech cranks the prop of a Tiger Moth at the British Commonwealth Air Training Plan Museum in Brandon, Man.
Stephen J. Thorne

Few machines churn conflicting emotions like Second World War aircraft. They are, after all, instruments of death and destruction: Warbirds. Yet they inspire great nostalgia, tenderness and sentimentality among the veterans who flew them as well as the generations raised on the stories they told.

Names like Spitfire, Hurricane, Mustang, Corsair and Lancaster are immortal, summoning lofty ideals…purity of purpose and nobility of cause, hearkening to a time when the lines delineating good and evil were clearly and undeniably drawn, and battle in “the footless halls of air” was an uncompromising test of skill and courage, mano a mano.

In their own antithetical ways, they are pretty prima donnas with contradictory sensibilities—crude and temperamental guzzlers of gasoline and spitters of oil who deign to afford their human cargoes only rudimentary aids by today’s standards: basic instrumentation, a stick and pedals.

In return for these parsimoniously spare concessions, they demand unshakable instinct, unfailing eyesight, unwavering confidence and unyielding execution from those few to whom they grant access to the great blue.

They were at once indispensable and dispensable tools of war (the Allies lost 22 Spitfires and 35 Hurricanes a week while winning the Battle of Britain; more than 900 fighters in all). Almost 80 years on, the survivors are rare birds worth millions apiece.

On the ground, they are pampered and preened poseurs, their chins raised and noses thrust skyward like pompous pretenders, coddled and cosseted by expert aero-technicians and dedicated volunteers who dote over their demanding charges like new mothers.

But set these babies free and, oh, how they fly! Wheels up! Left turn out! Glory reclaimed! What beauty! What speed! What grace! What thrill! 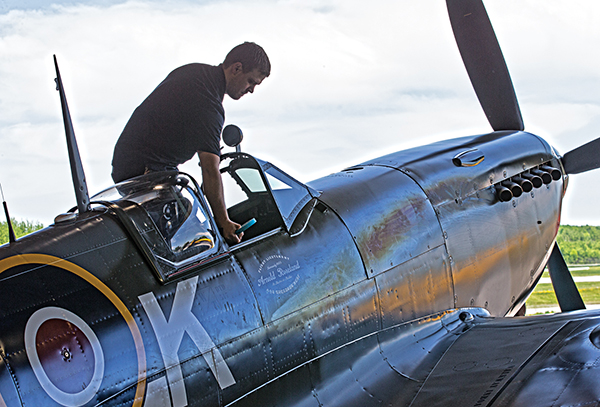 Adjustments are made to a Spitfire Mk IX before another flight.
Stephen J. Thorne 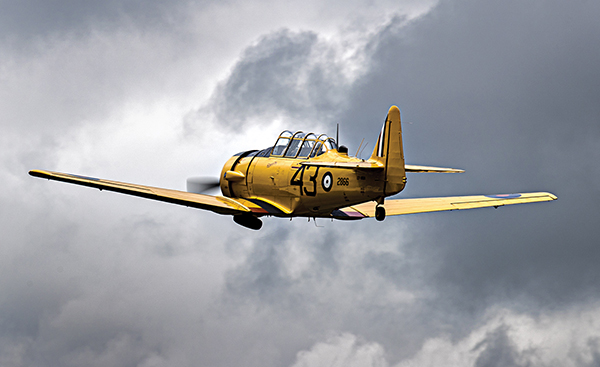 The North American Harvard was the last plane many newly minted pilots flew before they were deployed overseas.
Stephen J. Thorne 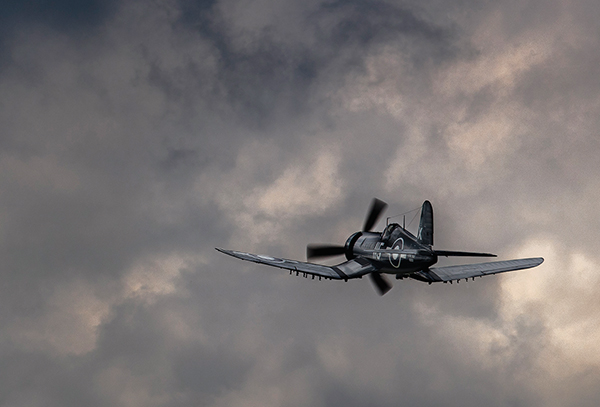 Surely there are few more stirring manmade mechanically generated experiences than the sight and sound of a Spitfire making a low pass, the 500 pieces of its growling 1,575-horsepower Rolls-Royce Merlin V-12 engine working in flawless harmony as it climbs out and turns in a steep bank, fading in seconds to become but a speck among the clouds and expanse of blue sky. Even then, it is unmistakably a Spit. Its tapered, aerodynamic body; signature elliptical wings; snug cockpit that inspires flyers to say it is worn, not flown—there is not, as they say, a bad line on it. It is the quintessential marriage of form and function.

More than mere machines, these birds live. They breathe. They flex and bend and scream and roar under the stresses and strains of air and altitude. Mistresses and masters of the sky, defiers of gravity, they rekindle memories and inspire dreams. Soon enough, they will be the last tangible remnants of their time and those who flew and fought and lost and ultimately prevailed in them. 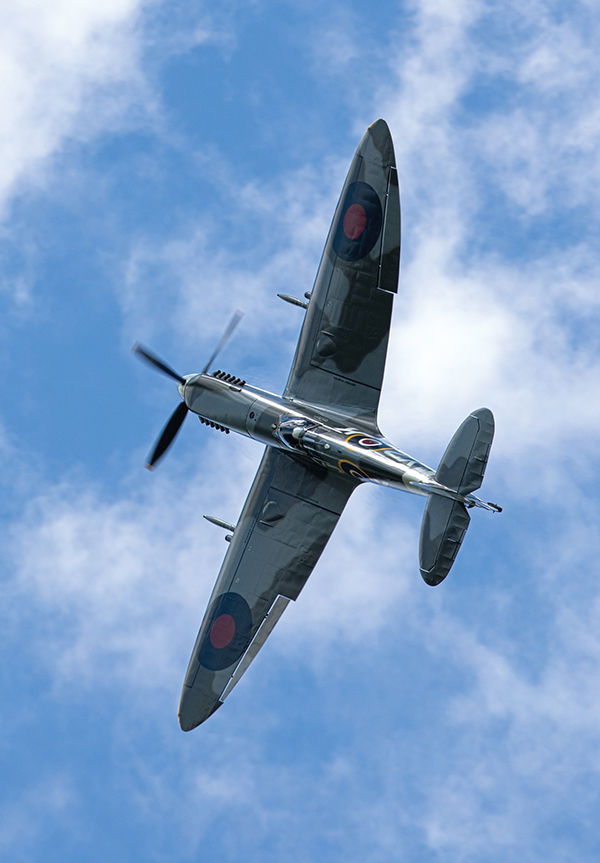