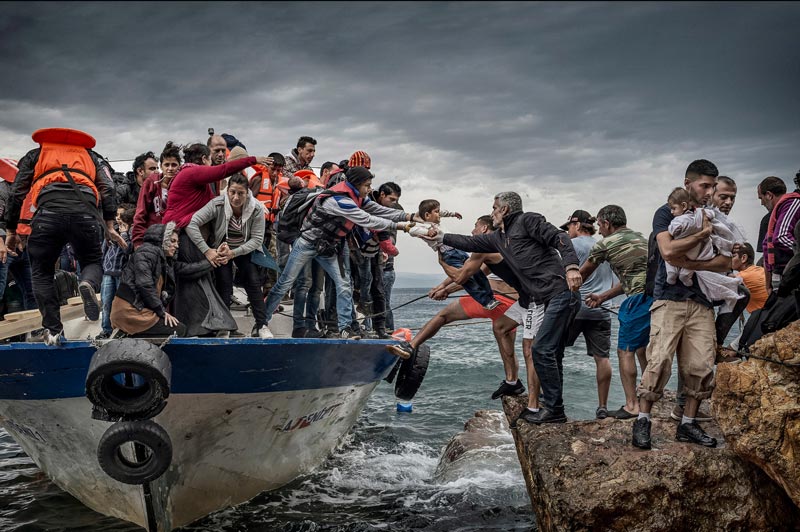 Refugees and migrants reach the coast of the Greek island of Lesbos after crossing the Aegean sea from Turkey on October 11, 2015.
Antonio Masiello
The United Nations High Commissioner for Refugees is urging world leaders to boost their efforts to promote “peace, stability and co-operation” in the face of a global refugee crisis.

The agency says refugee numbers driven by violence, persecution, war and human-rights violations have been increasing for the past decade, rising by four per cent from 2019 to a record 82.4 million in 2020.

Almost a million children were born in displacement between 2018 and 2020.

Children under 18 are particularly affected, said the report. They account for 42 per cent of all forcibly displaced people despite the fact they comprise just 30 per cent of the world’s population. Almost a million children were born in displacement between 2018 and 2020, it said.

The COVID-19 pandemic has made the lives of those forced from their homes more difficult, both within and outside the borders of their native soil. More than 160 countries implemented border and travel restrictions last year.

“With many governments closing borders for extended periods of time and restricting internal mobility, only a limited number of refugees and internally displaced people were able to avail themselves of solutions such as voluntary return or resettlement to a third country,” said the report, released June 18. 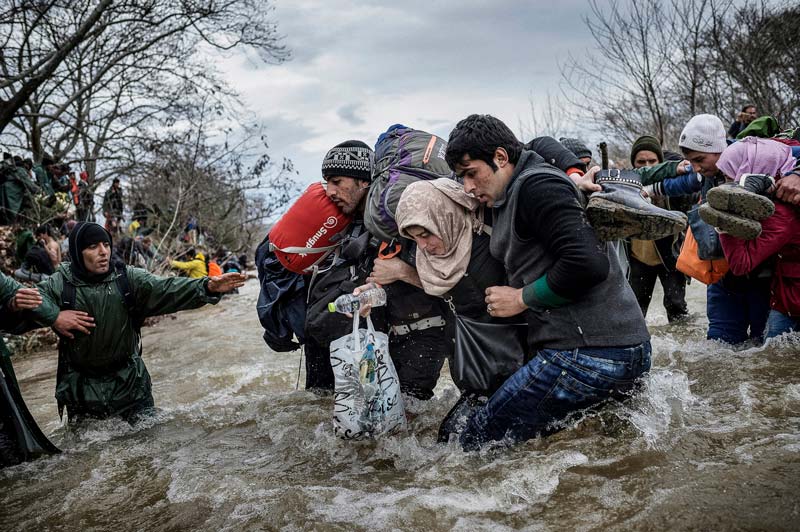 Migrants cross a river on the North Macedonia-Greek border after leaving the Idomeni refugee camp in Lesbos on March 14, 2016.
Antonio Masiello
“People who have been forcibly displaced or who are stateless have been among the hardest-hit groups of society, facing increased food and economic insecurity as well as challenges to access health and protection services.”

Basing its numbers on government, non-governmental organizations’ and its own data, the Geneva-based agency said Syria had the most displaced people as of Dec. 31, at 6.8 million, followed by Venezuela with 4.9 million, Afghanistan with 2.8 million and South Sudan with 2.2 million.

About 251,000 refugees returned to their countries of origin in 2020, the third-lowest number in 10 years. The report said continuing insecurity, an absence of essential services and a lack of work contributed to the decline.

Canada plans to bring in 45,000 protected persons this year.

The report pointed to areas of continuing conflict—notably Syria, Afghanistan, Somalia, Yemen and Ethiopia—and echoed calls for a global ceasefire.

“With numbers having risen to more than 82 million, the question is no longer if forced displacement will exceed 100 million people—but rather when,” said the report. “The need for preventing conflicts and ensuring that displaced people have access to solutions has never been more pressing than now.” 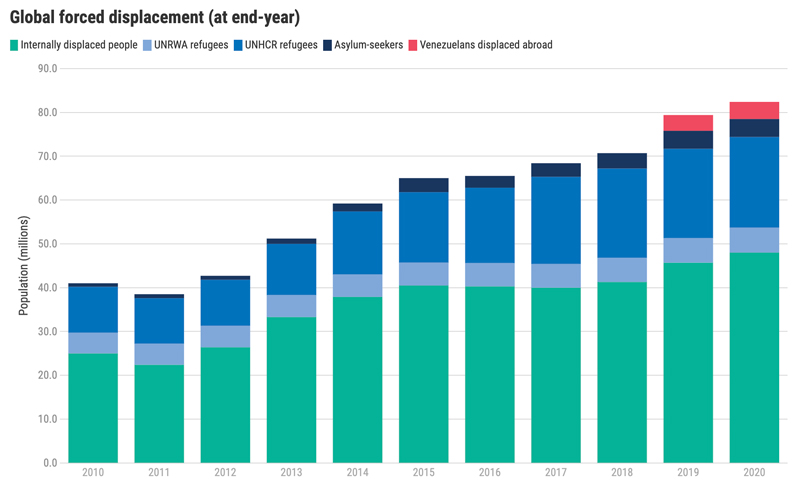 82.4 million people have been forcibly displaced as a result of persecution, conflict, violence, human rights violations and events seriously disturbing public order.
UNHCR
Rema Jamous Imseis, the UNHCR representative in Canada, recently described Ottawa’s response to her agency’s urgent pleas as “a critical lifeline to people who desperately need it.” Canada plans to bring in 45,000 protected persons this year, up from 23,500 in 2020.

“Protected persons” is a legal term under international humanitarian law meaning people under specific protection of the 1949 Geneva Conventions and subsequent legislation.

Ottawa says it will offer asylum to more people in need, welcome more refugees through new channels, and increase support to community-sponsored refugees.

In 2020, Secretary-General António Guterres repeatedly urged a drastic de-escalation of hostilities worldwide by year’s end. “The world needs a global ceasefire to stop all ‘hot’ conflicts,” he said.

The measure would help fight the pandemic and “create opportunities for life-saving aid, open windows for diplomacy and bring hope to people suffering in conflict zones who are particularly vulnerable to the pandemic,” the UN declared.

At least 180 countries, including Canada, along with the UN Security Council, peace advocates, civil society groups, regional organizations and millions of everyday people endorsed the call.

“The early months of 2021 have offered a glimmer of hope, even as conflict and displacement continue in many parts of the world,” said the agency report, citing a decision by U.S. President Joe Biden’s administration to admit up to 62,500 resettled refugees this year and as many as 125,000 in 2022.

“Many more such symbols of solidarity and responsibility-sharing are needed to fulfil the rights, needs and, where possible, hopes of the displaced people around the world.”

Turkey hosted the most refugees in 2020, at almost four million, 92 per cent of them Syrian. Colombia took in over 1.7 million displaced Venezuelans, while Germany hosted almost 1.5 million refugees, the bulk of them Syrians and asylum-seekers. At about 1.4 million each, Pakistan and Uganda rounded out the top five hosts.

These are for the most part temporary solutions. The bulk of refugees would naturally prefer to return to a safe and peaceful home country or resettle elsewhere. Resettled—another legal term—refugees have the right to reside long-term or permanently in their country of resettlement and may also become citizens of that country.

The UNHCR and the International Organization for Migration froze resettlement departures for several months last year amid early pandemic-related border and travel restrictions.

“We need much greater political will to address conflicts and persecution.”

Some of those restrictions were eased over time, but just 34,400 refugees were resettled to third countries in 2020, down from 107,800 the year before—a 69 per cent drop. The agency estimates 1.4 million refugees are in need of resettlement.

More conclusions from the UNHCR report:

Forced displacement situations.
UNHCR
“The tragedy of so many children being born into exile should be reason enough to make far greater efforts to prevent and end conflict and violence,” said agency Commissioner Filippo Grandi. “We need much greater political will to address conflicts and persecution that force people to flee in the first place.

“Solutions require global leaders and those with influence to put aside their differences, end an egoistic approach to politics, and instead focus on preventing and solving conflict and ensuring respect for human rights.”

An award-winning journalist, editor and photographer. He has reported on the downfall of South African apartheid and from war fronts in Kosovo and Afghanistan.
All Posts
PrevPrevious ArticleVeterans with PTSD should have MedicAlert IDs, says Afghanistan vet
Next ArticleTop general warns of civil war threat as U.S. troops exit AfghanistanNext