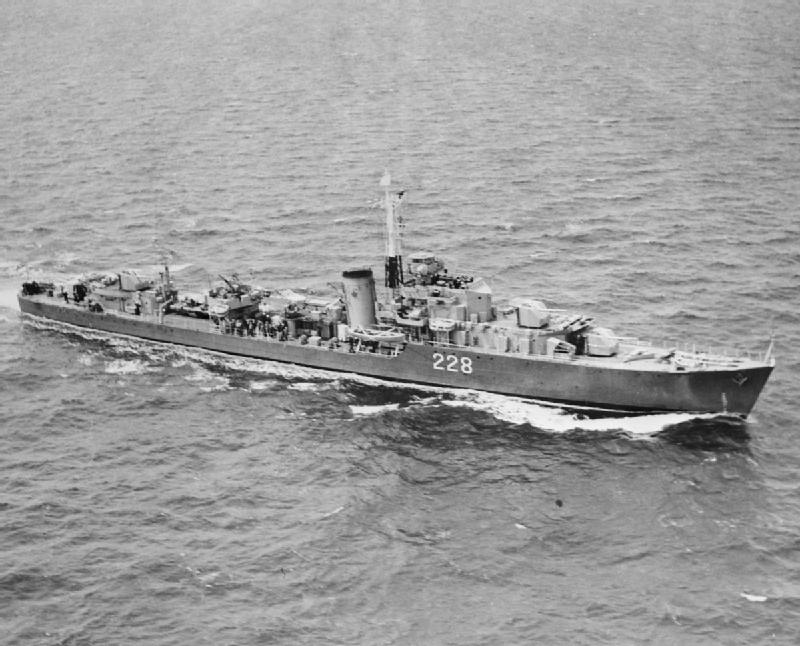 The Royal Canadian Navy C-class destroyer HMCS Crusader (DD 228), circa 1946 after the transfer to the RCN. Crusader had been commissioned in 1945 as HMS Crusader (R20). It was later converted to an anti-submarine frigate (DDE 228) and scrapped in 1964.
Imperial War Museums- Wikipedia
In late-October 1952, during the Korean War, HMCS Crusader joined the Trainbusters Club in Korea. Within six months, Crusader garnered the club’s championship for Canada.

The club was an informal competition between ships in the conflict which took out enemy trains.

“We had some of the finest gunners in the Canadian navy,” said Irving Larson of Crusader.

It began in July 1952 after an American destroyer, the USS Orleck, demolished two trains in two weeks. It was declared trainbusting champion and a challenge was issued to beat the score.

A ship could only claim a train if they destroyed the engine, regardless of how many rail cars were obliterated.

In one area, there was a series of five tunnels. “We caught a train between tunnels and destroyed all the boxcars,” recalled Norman Heide of Sioux. But without the engine, Sioux received no credit toward the championship.

Trains carried supplies for North Korean forces along the eastern coastline bordered by the rugged Taeback Mountains. In some places, the rail line came within range of guns on UN coalition navy ships, which had to stay some distance from land to avoid being targeted by Korean coastal batteries.

A ship would spot the trains, then radio the vessel whose “guns were already loaded ready to fire,” said Ken Kelbough of HMCS Sioux. “The guns would level off and then foooom, foooom, blew them up.”

Then “we had to get out of there because they would bring up shore batteries and you’re a sitting duck on a ship.”

Most ships escaped, except for HMCS Iroquois, which was the only Canadian ship to suffer losses from enemy action. It came afoul of shore batteries on Oct. 2, 1952. Three sailors died and 10 others were casualties.

Two of the trains were running in opposite directions: they were taken out simultaneously.

The success of the Canadians was no fluke. They were careful hunters.

“At night, in the dark, they’d shut down everything onboard the ship and just glide along the coast…listening to see if they heard a train or whistle.” When they did, up went a star shell, flooding the coast with light so gunners could “hit it before it heads into a tunnel,” recalled Daniel Kendrick of HMCS Huron.

Crusader was initiated into the club by taking out a 13-car train, and engine, on Oct. 28.

It was around 11:20 p.m., when a train was spotted. At first sight, the gunner fired at the lead engine, hitting dead centre. It caused an explosion and rail cars spilled along the line. Then Haida gunners obliterated what was left of the train.

Another opportunity was missed just three days later when an engine squeaked into the safety of a tunnel after uncoupling its cars.

In April, Crusader moved the bar higher, destroying three trains and engines in a 24-hour period. Two of the trains were running in opposite directions: they were neutralized simultaneously.

HMCS Athabascan was the last to join the club, taking out its first train on May 24, 1953.

Hitting a train “was quite an achievement truthfully because the ship is going up and down, you’ve got to get your guns…right exactly where the train is, or just below a bit, to destroy the track and knock it off. And it became quite a feat,” said Haida gunner Jim Wilson.

In the end, 28 trains and their engines were destroyed by the Trainbusters Club. Eight of them owed their demise to the three Canadian ships. Athabaskan and Haida equalled Orleck’s record, taking out two trains apiece. But Crusader crushed the competition, credited with destruction of four trains and engines.

All Posts
PrevPrevious ArticleDaughters of the King now mothers of Canada
Next ArticleOn this date: November 2022Next