The price of sexual harassment in the military 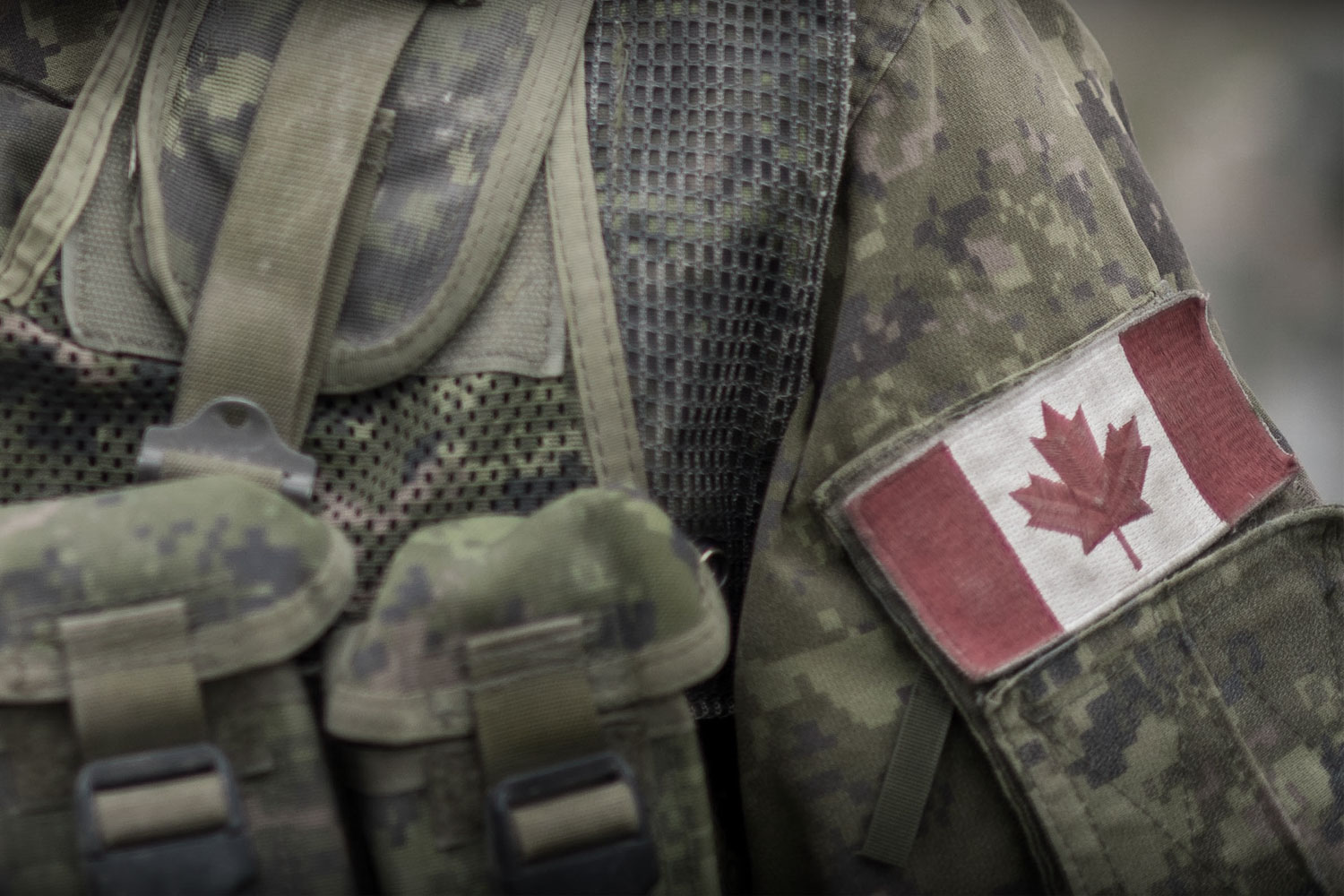 The Canadian Armed Forces has gotten tough on sexual harassment and assault.

Chief of the Defence Staff General Jonathan Vance has said ending this behaviour is at the top of his agenda.

In the past year, dozens of military personnel have been discharged, demoted or fined for offences ranging from sexual relationships with a subordinate to harassment, pressuring someone into sexual relations, assault and rape.

Nearly 1,000 of 43,000 regular-force military personnel responding to a November 2016 Statistics Canada survey revealed they had been subject to inappropriate sexual behaviour in the workplace or sexually assaulted by a colleague in the previous year.

More than 27 per cent of regular- force women and 3.8 per cent of men reported they had been sexually assaulted sometime during their career. Nearly half of those reported the assault had been by someone of higher rank. Less than a quarter of the women surveyed reported the assault; others were worried their report would not be taken seriously or would harm unit cohesion, feared retaliation and ostracism, or worried stigma would harm their careers.

Research indicates that the CAF is taking investigation more seriously. The rate of unfounded cases dropped from an average of 28.89 per cent between 2010 and 2015 to about seven per cent in 2016. Recruits are warned of the consequences of sexual misbehaviour. Education for all ranks now includes clear instruction on what constitutes sexualized social behaviour, sexual harassment and sexual offences. The CAF has hired gender advisors and established the Sexual Misconduct Response Centre for victim support. 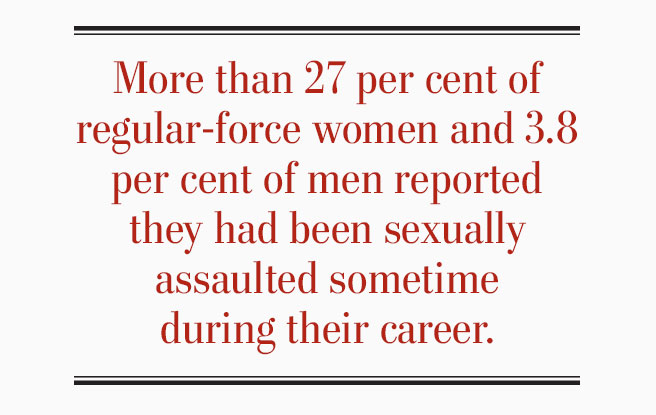 The Canada Labour Code and the Canadian Human Rights Act maintain that all Canadians have the right to live and work free from sexual harassment. But stopping sexual assault is also the healthy thing to do. Trauma of any kind increases the risk of mental disorders and suicide attempts. Research in the United States shows sexual assault is more likely to result in post-traumatic stress disorder than combat trauma. In civilian populations, 65 per cent of male and 46 per cent of female sexual assault victims develop PTSD and a third have a major depressive disorder sometime in their lives. Rape survivors are six times more likely to use cocaine and 10 times more likely to use other drugs.

“Female veteran survivors…face an increased burden of chronic pain, including a broad range of pain conditions independent of the psychological effects of (the trauma),” concluded a report in Military Medicine.

This can blunt careers, forcing some victims to change their career goals or even leave the CAF. The Statistics Canada report revealed 17 per cent of regular-force members were personally targeted by sexualized or discriminatory behaviour. 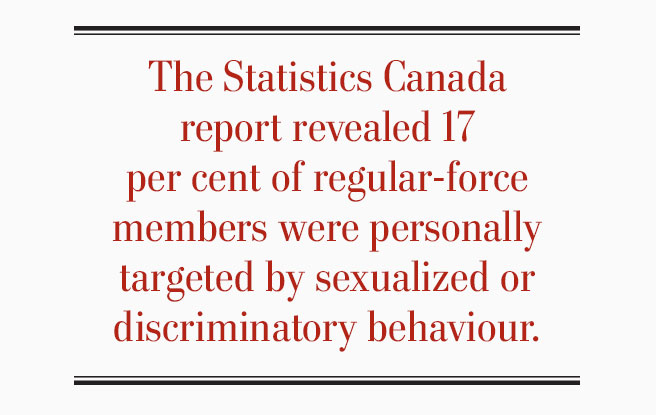 Fear and stress from working under such conditions weakens the immune system, increasing susceptibility to viral and bacterial infections and increasing the amount of time needed to get better. Powerful stress hormones flood the body, raising blood pressure, shutting down or slowing the digestive process, releasing extra blood sugar. When those hormones flood the body on a daily basis, it increases risk of heart disease, digestive problems such as acid reflux, diarrhea or constipation, bowel disease, and type 2 diabetes. In men, it can lower testosterone levels, leading to erectile dysfunction and impotence and increasing risk of prostate infection.

Most stress studies are conducted on civilian populations, and there is an argument that effects on military victims of sexual harassment and assault are magnified because military workspaces and living spaces often overlap, so victims can’t escape from the person who is harassing or has assaulted them.

In addition, assault or harassment by another member of the military carry a sense of betrayal, which in itself can cause a moral injury. And there is a cumulative effect as this stress is added to an already long list of stressors that affect everyone in military service.

Military sexual harassment and assault not only affect those directly involved, but all of us. Toxic environments squelch innovation and productivity, preventing military personnel from working at their peak. Once they leave, they are likely to be less healthy, increasing the burden on Veterans Affairs Canada and our provincial health-care systems.

Music soothes the injured brain MILITARY HEALTH MATTERS: Checking on your buddies Progress in the fight against malaria Time heals