COMMONWEALTH WAR CEMETERY, BAYEUX, NORMANDY, JUNE 5, 1955: Bent and frail, Lise Enguerrand was a poor village woman in her early 70s. I was a Paris student from Toronto, aged 21. We were both there to attend to Stuart Hogarth of Hampton, Ont. Stu was a 28-year-old Canadian sergeant killed on Sept. 4, 1944, three months after the Allies’ June 6 Normandy invasion. His mother, my mother’s distant cousin, had asked me to come to this majestic garden of grief to represent her at her son’s grave.

Madame Enguerrand was there, as every week, to dust Stu’s upright headstone and bring fresh flowers. She had come, and would come for years more, as Stu’s “French mother.”

Her weekly mission to the cemetery was my first inkling of how many French felt about Canada’s sacrifices in the two World Wars: 66,655 killed in the first one, more than 45,000 (all theatres) in the second. Madame Enguerrand told me that “quite a few” of her friends had also ‘adopted’ one of 181 dead Canadians among the 4,144 Commonwealth burials of the Second World War resting in Bayeux, only a few miles inland from the sea.

That visit changed my life, making war remembrance reshape my whole view of Canada. But more importantly, I’ve often wondered how French attitudes toward Canada’s involvement in the war have evolved since my visit to Bayeux.

Key factors are age and geography, then official attitudes—but also imagination. Obviously, French who lived through 1939-45 start with imperishable memories of the war’s scope and all-eclipsing importance. Living near D-Day beaches constantly reminds local people of Canada’s sacrifices. Large and small monuments and cemeteries abound, strengthening lifelong affinities with Canadians. Once or twice a year—June 6 and Nov. 11—white-haired Canadian vets, with Canadian officials and honour guards, turn up at local squares, fields and beaches, even their stops in hotels and restaurants keep memories fresh. Our vets always get an effusive welcome, including from children waving Canadian flags. 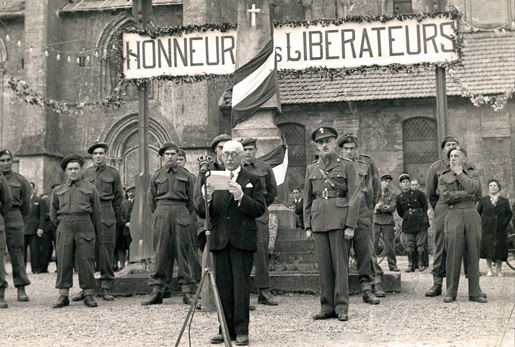 A speech is made during wartime liberation ceremonies.
PHOTO: CANADIAN ARMY

Mayors, chambers of commerce, tourist offices and citizens’ war-memory associations back these welcomes with special events and guides for Canadian visitors. Dieppe, recalling the catastrophic, mainly Canadian raid in 1942, virtually becomes a Canadian city each August 19. When French strollers see how high-placed German machine-guns could sweep the beaches, they realize the Canadians had no chance. But they learn that Canada’s sacrifices tested Hitler’s Atlantic Wall for the massive D-Day invasion less than 22 months later.

These attitudes of appreciation have been passed down through generations, and they are not confined to the last 65 years or within the borders of France. Philippe Martin, president of the Friends of the Canadian Monument at Vimy, recalls the 10,062 Canadian victims of Canada’s brave assault on the Ridge in the First World War. “Most of our 150 members are here by conviction—to perpetuate the memory of those who died for us. The Canadian National Vimy Memorial is essential to the life of Vimy [pop. 4,675]. It inspires us all to remember our pasts. Our children visit it with parents and teachers.” 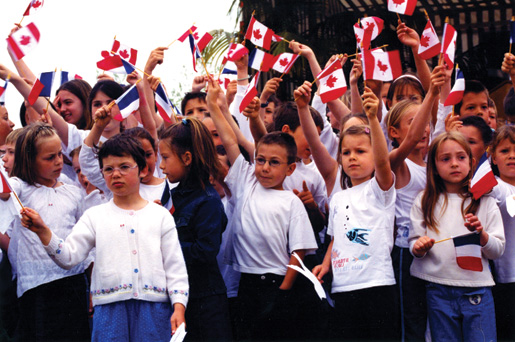 It is a fact though that for many decades after 1945, Gaullist politicians played down Allied contributions. De Gaulle’s strategy was to efface the humiliation of France’s 1940 defeat. He wanted to make Frenchmen believe that France had played a decisive role in liberating itself. He rarely mentioned Allied contributions, and discouraged high-level French attendance at Allied commemorations and celebrations. This was painfully the case in the years following his 1967 incitement to Quebec independence.

A break from Gaullist nationalism came in 1988 when President François Mitterrand opened the imposing Mémorial de Caen—a museum of 20th-century “history for peace” with rich coverage of Allied and Canadian contributions during the Normandy Campaign. Operated by the City of Caen, where Canada fought a ferocious, winning battle, it enjoys wide popular and business support. Its 84 staffers each year greet some 400,000 visitors.

Starting with the breathtaking Canadian National Vimy Memorial, France has donated land for Canada to build cemeteries and monuments. Official France is always well represented at Canadian events. With state encouragement, Normandy Day (June 6) began in 2004 to deepen French memories of Canadian and Allied war sacrifices in the campaign.

Naturally, many local initiatives recall French dead: for France, the First World War was a generational holocaust. But Nathalie Worthington, director of the Juno Beach Centre, points to countless Canadian-memory deeds of ordinary citizens. “For over 60 years,” she assures, “the Comité Juno Normandie-Canada has organized tributes to Canadians all over Normandy, and helped welcome returning veterans. Last August it inaugurated a Falaise monument honouring Canadian airmen—and this June it unveils near our centre a monument remembering Canadian sailors.”

Other examples: The village of Le Mesnil-Patry, where 114 1st Hussars and Queen’s Own Rifles died, built a Canada monument in its Place des Canadiens square. The Collège de Courseulles built a lovely Canadian monument. And perhaps most moving of all, each year since 2004, Caen’s Collège Professionnel Victor-Lépine asks students to remember—in the Westlake Corner—the death of the three Canadian Westlake brothers.

Claude Gérard, president of the volunteer Association Jubilee is disappointed at national education authorities: “The only regret of all our members,” he told a local newspaper in August 2006, “is the lack of Dieppe school visits [to the Dieppe Memorial museum]. I don’t understand the education ministry’s lack of interest for such an important page of local, national and international history.”

A spectacularly different story comes from Marc Pottier, education and research director of the Mémorial de Caen. He has no complaints about the government, for his institution attracts young people easily. “Of our 400,000 annual visitors, half are under 20, and a third come on well-prepared school visits.”

Why is the museum so successful? “We don’t just show exhibits; we explain them, using all the tools of modern pedagogy: kits, films, debates and interactive displays. Everything we do targets specific age groups—primary, secondary and university. We help each child or youth find his or her own way, so they go away with real and lasting understanding. We even train 1,000 teachers a year to support this thought-provoking pedagogical approach.”

As the Caen Mémorial imaginatively demonstrates, reaching French people of all ages, especially youth, requires putting technology in the service of pedagogy. Showing “dead” objects—weapons, uniforms, helmets—is interesting only up to a point. Why not have interactive, special-effects video-game exhibits, Google Earth (space-satellite) over-flights of battlefields?

What do longtime observers of France’s souvenir des Canadiens believe? Will today’s French gratitude for Canada’s wartime exploits and sacrifices continue? “Absolutely,” assures highly decorated retired lieutenant-general Charles Belzile, a founding director of the Canadian Battlefields Foundation and now Honorary Grand President of The Royal Canadian Legion. “The French people’s interest in remembering Canada is steady and heartening. We’re especially happy with schools’ support: teachers and pupils have mounted candlelight vigils at Canada’s cemetery at Beny-sur-Mer, among others, strictly on their own initiative.”

Worthington at the Juno Beach Centre concurs enthusiastically. “Canada enjoys a huge capital of sympathy among us French, and this will continue. For the people of Normandy, Canada is now in our genes and our collective memory. Courseulles (of which she is a native), Caen and Falaise belong to both Canada and Normandy.”

Yves Le Maner, director of the scholarly yet accessible La Coupole “war and memory museum” in France, agrees that “memories naturally last longest near battlefields. And youth education is critical. For Hollywood—plus easy availability of non-copyright U.S. photos and films—can make many believe the Americans came alone. But we give a lot of attention to Canada, and always will.”

Those working in war remembrance know that French memory for Canadians’ sacrifices is a fragile flower. It needs watering from generation to generation. And it needs endless re-interpretation, using the values, vocabulary and tools of each era.

Madame Enguerrand, with her hand-picked bouquets, expressed French devotion to Canada in her time. Zeal for such testimony may vary with the years, and with closeness to battlefields. But in different ways than that frail, unassuming woman from Bayeux—but with equal heart—most Frenchmen and women today still vow never to forget this: that Canada twice helped bring them freedom and peace.

The Victory And The Cost On The Water, On The Beach Centred On Juno Mayhem In Normandy: Army, Part 102