The folly of militarizing space 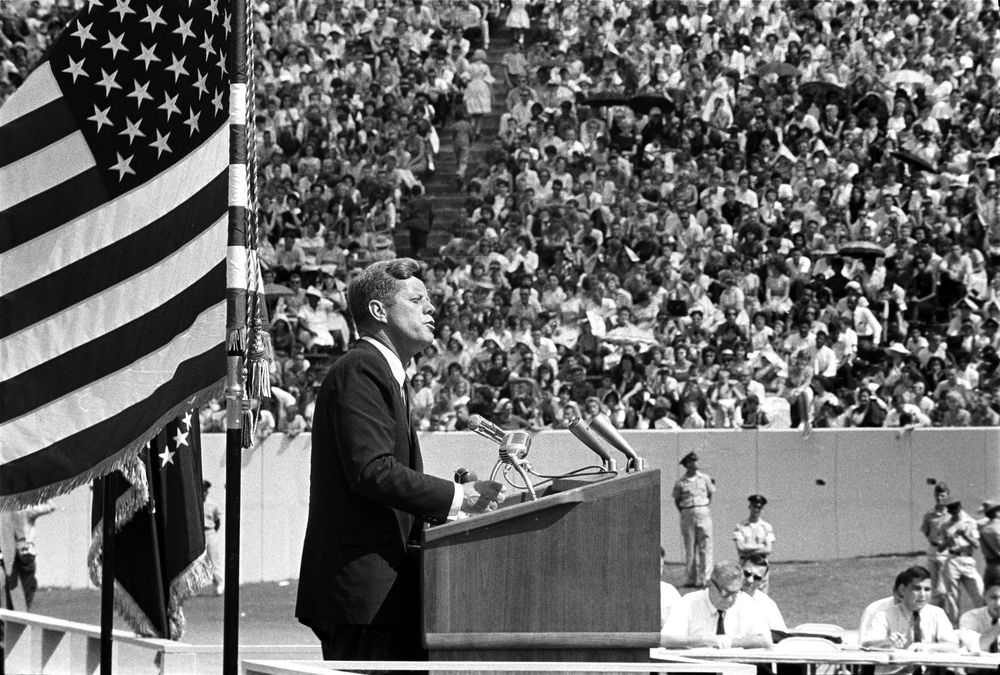 He was speaking to a crowd of 40,000 at the Rice University football stadium in Houston, many of them wide-eyed schoolchildren, their heads filled with visions of astronauts and rocket ships, space capsules and starscapes.

The first manned missions of the Mercury program were drawing to an end when Kennedy spoke, and the Apollo program was already in its early stages. Destination: the moon.

Those were different times, at least in the public mind: idealistic, hopeful, prosperous and unified. Americans were in the grip of Cold War rivalry. It was also an age when science was at the forefront of public discourse.

Kennedy declared the space race to be a quest for knowledge and progress, a race that must be won because “space science, like nuclear science and all technology, has no conscience of its own.”

“Whether it will become a force for good or ill depends on man, and only if the United States occupies a position of pre-eminence can we help decide whether this new ocean will be a sea of peace or a new terrifying theatre of war,” he said.

Kennedy’s predecessor, Dwight D. Eisenhower, was deeply engaged in the security implications of space technology and had launched a network of spy satellites starting in the mid-1950s. They were photographing Soviet installations well before Russian cosmonaut Yuri Gagarin became the first human to orbit Earth. 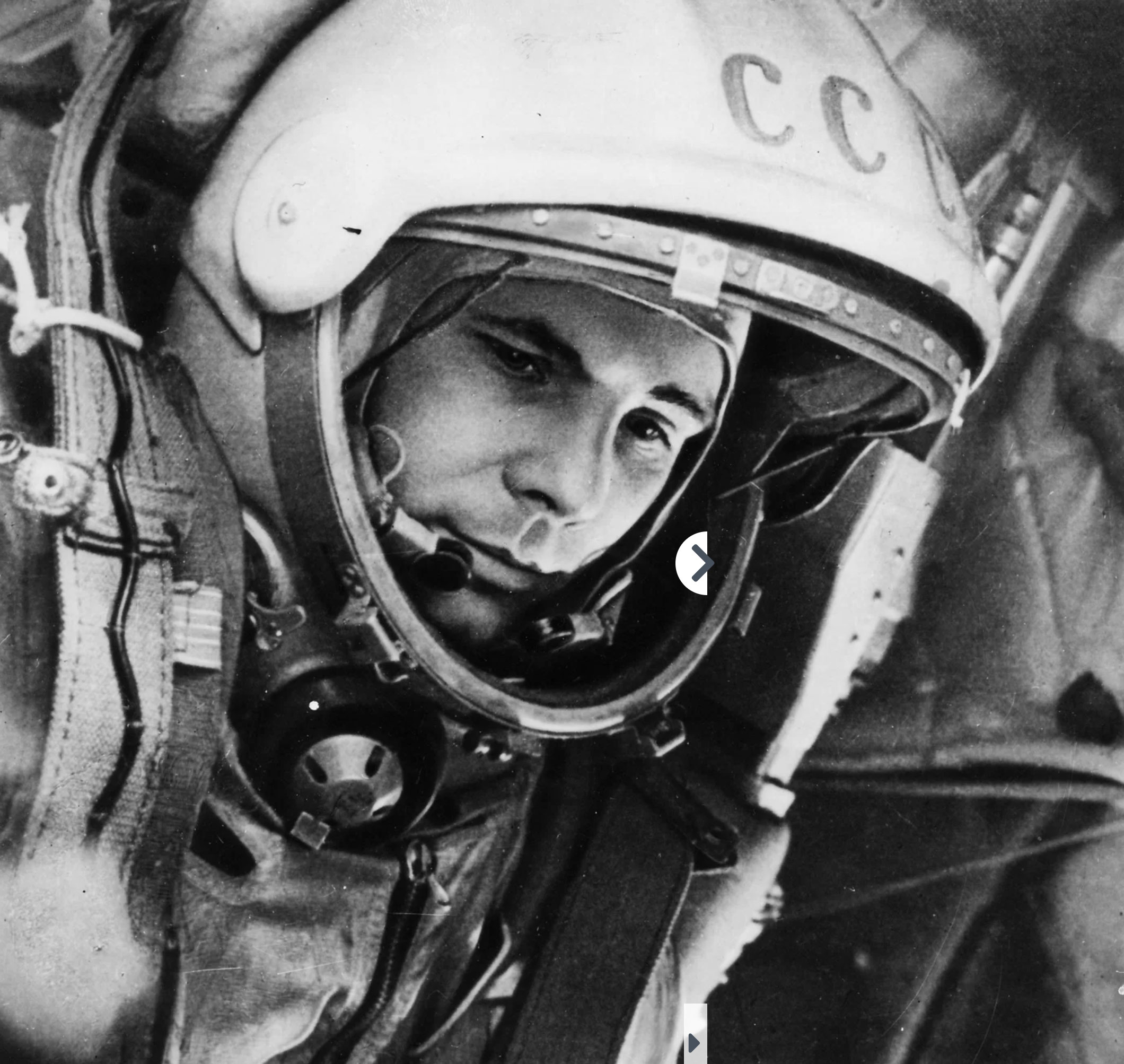 Soviet pilot and cosmonaut Yuri Gagarin became the first human to journey into outer space when his Vostok spacecraft completed one orbit of the Earth on April 12, 1961.
Wikimedia
Satellites notwithstanding, Eisenhower made other key decisions during the space program’s infancy that purposely distanced it from the military and no doubt informed Kennedy’s thinking.

Indeed, it was Eisenhower—a warrior and career army officer notoriously mistrustful of the military—whose blueprint for the peaceful exploration of space shaped the future of cosmic exploration to this day.

“From his long experience with the military, and the inexorably growing power of what he called the military-industrial establishment, he also knew that giving the job to the military services was not an option,” according to the online Encyclopedia Astronautica.

“They would squabble endlessly between themselves—each service already had its own planned satellite, man-in-space, and man-on-the-moon projects in the works.”

Eisenhower proposed the creation of a civilian space agency to Congress in April 1958. The National Aeronautics and Space Agency (NASA) was formed.

“He would rip out of the military those parts of it that were mainly devoted to fundamental rocketry or space research,” says the encyclopedia. “Most notable of these were the Army’s Jet Propulsion Laboratory at Caltech and [Werner] von Braun’s rocket team at the Redstone Arsenal in Huntsville, Alabama.”

The military would still pursue its own space programs, and it continued to push for a manned role in space and the deployment of combat spacecraft in orbit.

“The wisdom of Eisenhower’s choice was indicated by the fact that, despite the expenditures of hundreds of billions of dollars on these projects, not one of them reached the flight-in-orbit stage,” said the encyclopedia. “When the budget crunch came, military space projects were always the first to go.”

A resolution discouraging deployment of weapons of mass destruction in space was first tabled in the United Nations in 1963 after the Americans and Soviets made statements saying they had no intention of orbiting such weapons, installing them on celestial bodies or stationing them in outer space.

In 1967, the two superpowers ratified what’s become known as the Outer Space Treaty, roughly based on a pre-existing Antarctic agreement. Besides banning weapons deployments in space, it limited the use of the moon and other celestial bodies exclusively to peaceful purposes.

In 1983, President Ronald Reagan announced the Strategic Defense Initiative, a space-based missile defence system that threatened to weaponize space and upset the balance of mutual-assured destruction that existed between the nuclear arsenals of the United States and Soviet Union.

Scientists determined the technologies involved in the initiative were decades away from reality and the controversial project was ultimately shelved.

Matthew Overton, executive director of the Conference of Defence Associations Institute, says Canada should follow suit with what sounds an awful lot like a militarized version of what is already represented in the Canadian Space Agency.

Overton was vague about what the point of a Canadian space force would be beyond benefiting the institute’s benefactors—defence contractors including General Dynamics, Lockheed Martin, Pratt and Whitney, and Raytheon. 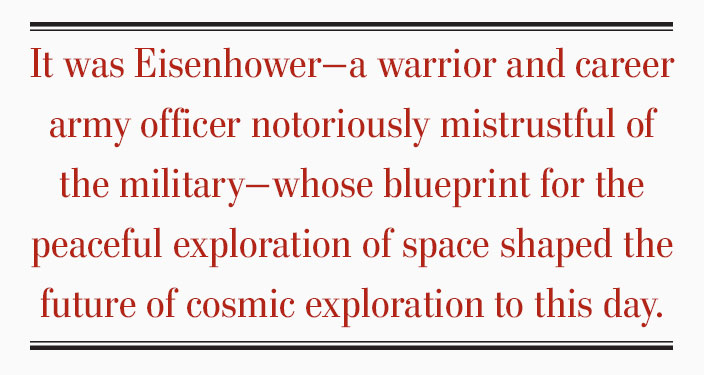 “At some point, we might like to think about a space force,” he told Postmedia. “Thinking about space as a separate entity in itself that deserves attention and expertise, I think is a good idea.”

He said Canada need not rush into anything. He suggested it should first develop a centre of excellence on space knowledge. But hasn’t the Canadian Space Agency, not to mention NASA and many others—which all have military components—filled that role, with distinction, for decades? 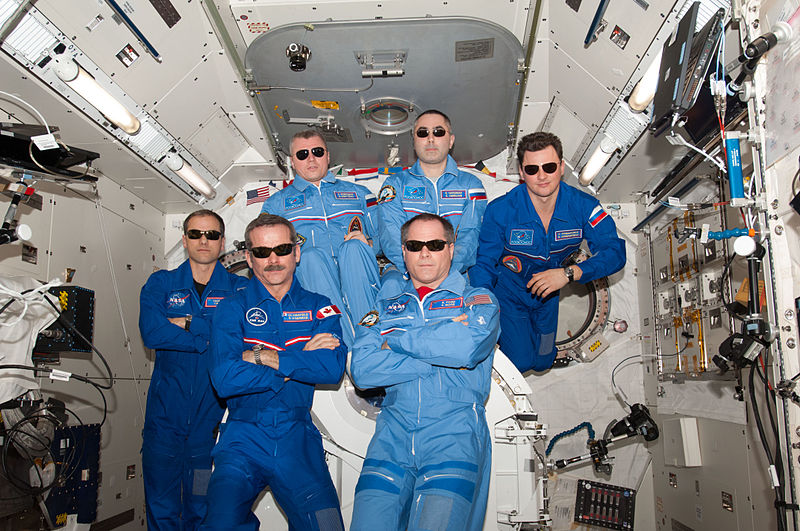 Commander Chris Hadfield (second from left) with the Expedition 34 crew in the Kibo laboratory aboard the International Space Station in April 2013.
NASA
The International Space Station has been manned by 220 people from 17 countries since 2000, including six Canadians on eight missions. It is a shining star in the annals of borderless co-operation and the peaceful pursuit of knowledge.

A “space force” conjures up images of The Thunderbirds, the marionette-driven 1960s television series whose (unintentionally) comical if not earnest puppets comprised a force of privately funded do-gooders operating on land, sea and in outer space.

The reality would inevitably be somewhat less altruistic and peace-fostering.

“That is why Canada’s defence policy…commits to investing in a range of space capabilities such as satellite communications, to help achieve global coverage, including the Arctic…. Canada will continue to promote the peaceful use of space and provide leadership in shaping international norms for responsible behaviour in space.”

PrevPrevious ArticleDouglas Gordon (Part 2): The troubles with Typhoons
Next ArticleErnie Verhulst (Part 1): A wide-eyed boy in Rotterdam, May 1940Next