The fight for Lake Ontario 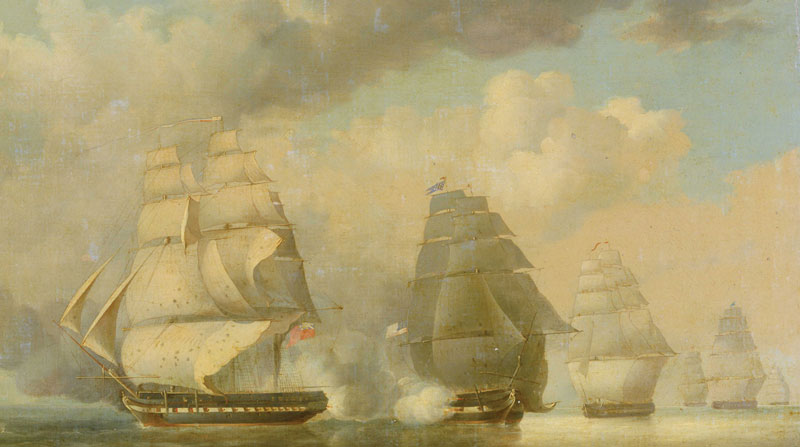 Under chase by the USS President, a damaged HMS Belvidera fires its stern guns as it makes a run for Halifax in June 1812. It was the first exchange of the War of 1812.
wikimedia.org
During the War of 1812, before roads connected large cities in North America, the sea, lakes and rivers served as highways.

Troops, armaments and supplies could most easily be moved long distances by ship.

The great cities were located on the shores, and thus could be attacked from the water.

So, control of the waterways could determine the fortunes of war.

The British had several ships and an arsenal on Lake Ontario, based at the Kingston Royal Dockyard, and the resources of the Provincial Marine. Thanks to the foresight of Upper Canadian administrators, notably General Isaac Brock, the Lake Ontario squadron had already been armed with a total of 105 guns. 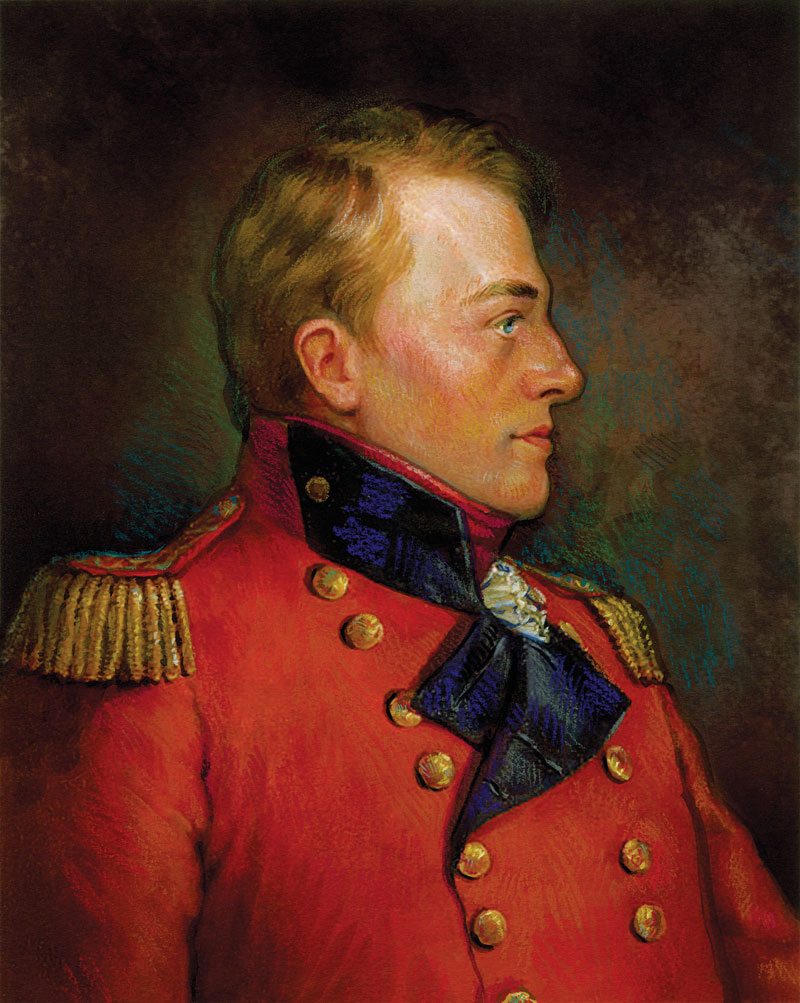 Isaac Brock was 43 years old when he died defending Niagara from the American invasion at Queenston Heights on Oct. 13, 1812
CWM
But an attack on the American navy yard at Sackets Harbor, N.Y., was unsuccessful, and in response, Isaac Chauncey was assigned in September to build the U.S. navy.

While the naval yard at Sackets Harbor got up to wartime speed, Chauncey commandeered and armed—in a process we would call retrofitting today—some merchant schooners. In November, Chauncy chased the British ship Royal George into Kingston, where shore batteries and gunboats repelled further attack.

Over the winter, Chauncey kept carpenters busy sawing ice around his ships so they could be moved to bear fire on any attackers approaching the shore. None did.

Yeo attacked Sackets Harbor at the end of May 1813, intending to destroy the shipyards and vessels under construction.

In March 1813, the Royal Navy appointed James Lucas Yeo commodore and commander-in chief on the lakes of Canada. Yeo arrived in May, along with 465 reinforcements to man the British navy and Provincial Marine vessels. Yeo was determined to maintain control over Lake Ontario.

While the British had the more experienced crews, Yeo’s chief weapon was HMS Wolfe’s 32-pounder carronade, which was deadly at close range. That is, if he could get close enough to use it—American guns had longer range.

Yeo attacked Sackets Harbor at the end of May 1813, intending to destroy the shipyards and vessels under construction, particularly the USS General Pike, which he feared could shift the balance of power.

The Americans torched General Pike to avoid it falling into British hands. After Yeo withdrew, the fire on the ship was quickly extinguished. The warship was still serviceable, but the shipyard was a mess.

While Chauncey dealt with the destruction, Yeo had the run of Lake Ontario and raided American supply lines.

On June 30, he set out to destroy General Pike with a raiding party of 700.

But two men deserted when the squadron put ashore to wait for darkness to cover their attack. The deserters were picked up by the Americans.

The jig was up. Yeo retreated and the Americans put heavy guard around General Pike.

Yeo was convinced a battle was inevitable, and set out on July 31 to find the Americans, who were sighted Aug. 7, anchored near the Niagara River.

Chauncey sailed until the British were in range of his guns, but safe from theirs, fired a broadside at the British at 7:30, then skedaddled.

So began a frustrating battle of cat-and-mouse between Yeo and Chauncey on Lake Ontario in August 1813.

“Immediately cleared for action. At 5:20 observed the enemy squadron,” of 13 vessels, reads the log of Yeo’s flagship, HMS Wolfe, quoted in “The First Encounter: Fighting for Naval Supremacy on Lake Ontario” by R.J. Williamson.

Chauncey sailed until the British were in range of his guns, but safe from theirs, fired a broadside at the British at 7:30, then skedaddled—at least as quickly as wind and sail allowed—to shelter under the shore batteries at Fort Niagara.

“Chauncey was four miles east of Niagara when the enemy hove into sight and his manoeuvres indicate he wanted, first and foremost, to be close to the covering fire of Fort Niagara’s long-range guns,” wrote Williamson in the 2002 article in Canadian Military History.

“All his reports showed that he believed that the British out-gunned him.”  Chauncey was also intimidated by Yeo’s reputation.

The next sighting was on Aug. 8.

Unbeknownst to the British, the American ships had heeled over in a squall in the middle of the night and two schooners sank, top heavy from the weight of their retrofitted guns and inexperienced sailors leaving too much sail aloft for the wind conditions.

At 5 a.m. the British spotted the Americans, but did not know they were searching for survivors. The American ships once again high-tailed it to shelter under the guns at Niagara.

“This accident gave to the enemy decidedly the superiority,” Chauncey wrote, “and I thought he would take advantage of it, particularly being to windward of me.”

“I fear Mr. Chauncey will not engage if he can help it …” Yeo reported. “My hope is they may remain out at night when we may be able to close with them before they see us.”

“Every gun was pointed, every match ready in hand.”

On Aug. 9, fortune favoured Yeo. As darkness fell, he was upwind of the enemy. He could control the start of battle. He chose to press that advantage after dark, sneaking in close after nightfall where his carronade was at most advantage.

“Every gun was pointed, every match ready in hand,” reported an officer on General Pike, “when to our utter astonishment, the Commodore wore and stood southeast, leaving Sir James to exult in the capture of two schooners.” 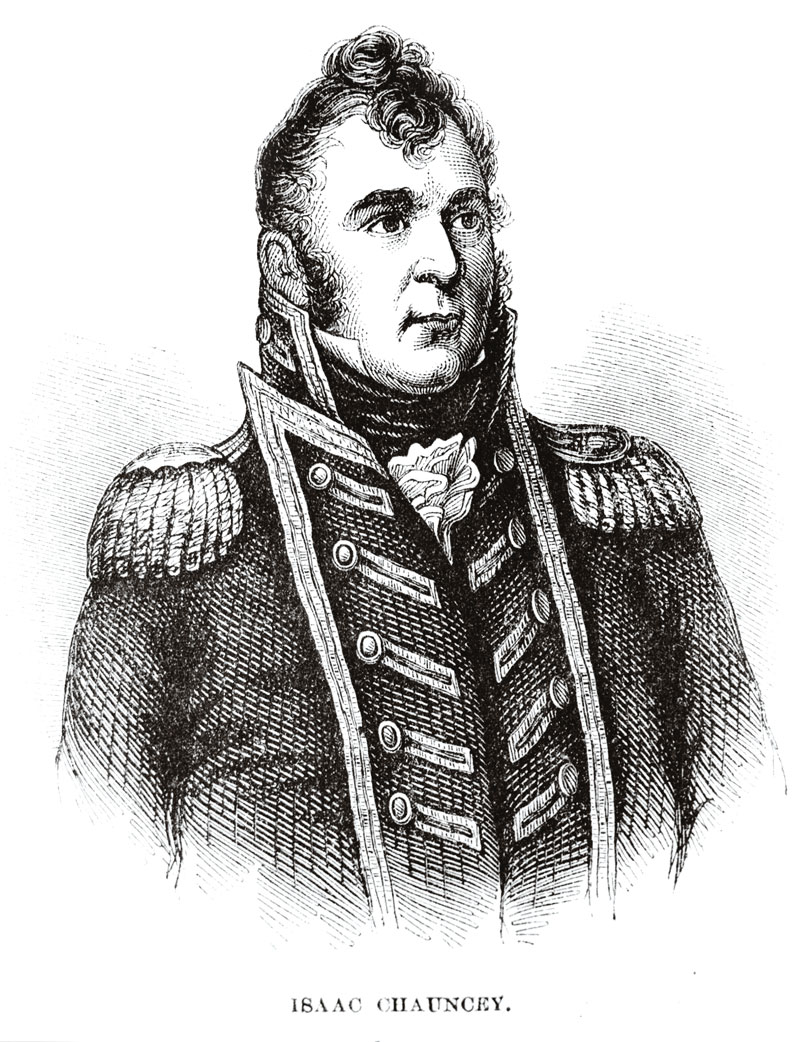 Commodore Isaac Chauncey exchanged fire with HMS Royal George in Kingston harbour on Nov. 10, 1812.
LAC/2932176
“It concerns me to find I have such a wary opponent, as it harasses me beyond my strength,” wrote Yeo.

The game of cat-and-mouse dragged on in September, the Americans firing off their longer-range weapons and dancing away before the British could engage.

At the end of September, when the two flagships finally engaged, General Pike brought down two of Wolfe’s masts.

Shielded by another British ship while wreckage was cleared and sails sent up, Yeo made his escape. Chauncey followed, but was towing another vessel, which he refused to cut loose, and could not match Yeo’s speed.

The early skirmishes on Lake Ontario were hardly great battles, much to Yeo’s disappointment.

Each side had been bruised, but time had been bought for both to build more ships. Which is why the battle for control of Lake Ontario is also known as the Battle of the Carpenters.

PrevPrevious ArticleThe 1943 battle in the Italian mountains
Next ArticleAllies fight the weather, terrain and the Japanese in a battle for Pacific islandsNext