A venerable search-and-rescue plane, the de Havilland CC-115 retired from service one year ago 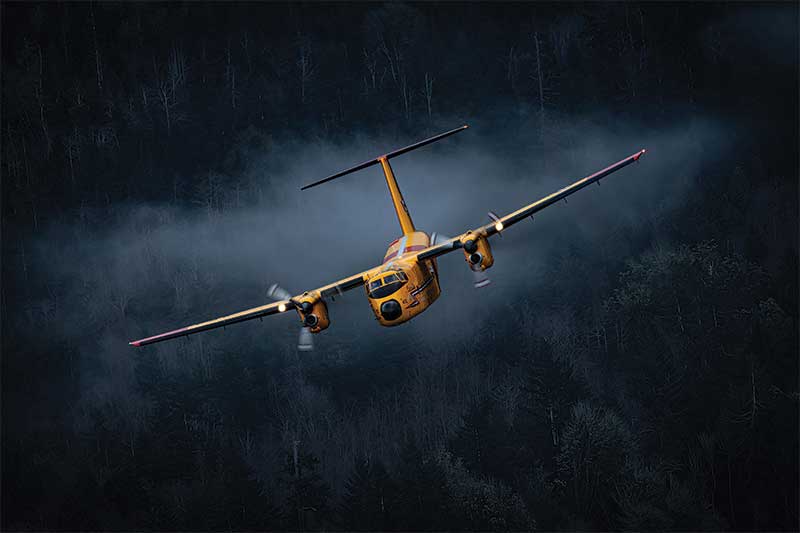 The “Buff” was a stalwart of West Coast search-and-rescue operations for decades.
Derek Heyes

After 55 years, the thrum of a Buffalo taking to the sky will be heard no more. The last of the Royal Canadian Air Force de Havilland CC-115 Buffalo fixed-wing, search-and-rescue (SAR) aircraft took their final flights—one on a training mission and the other to document the last performance—one year ago, on Jan. 15.

Weather conditions precluded a parachute jump, but crew members practised dropping rescue equipment and supplies to boats on open water and performed “valley shoots,” flying low through mountain passes so SAR technicians could get a close look at conditions on the ground.

“It was a great way to continue working full-out right to the very end,” said pilot Major Ryan Port in AirMed&Rescue magazine.

Entering RCAF service in 1967, the turboprop aircraft was initially used for tactical transportation, moving troops and equipment. In 1974, nine Canadian Armed Forces peacekeepers were killed in a Buffalo shot down by Syrian missiles in the Golan Heights.

The “Buff,” as it was affectionately called, could fly at low altitudes day or night for parachute drops, handle all weather conditions and take off and land in about the length of a soccer field. That meant the aircraft was also well suited for search and rescue, and CC-115s were eventually stationed across the country. But as age culled the herd, the remaining planes were concentrated on the West Coast, where they worked particularly well in mountainous terrain and over wild waters. 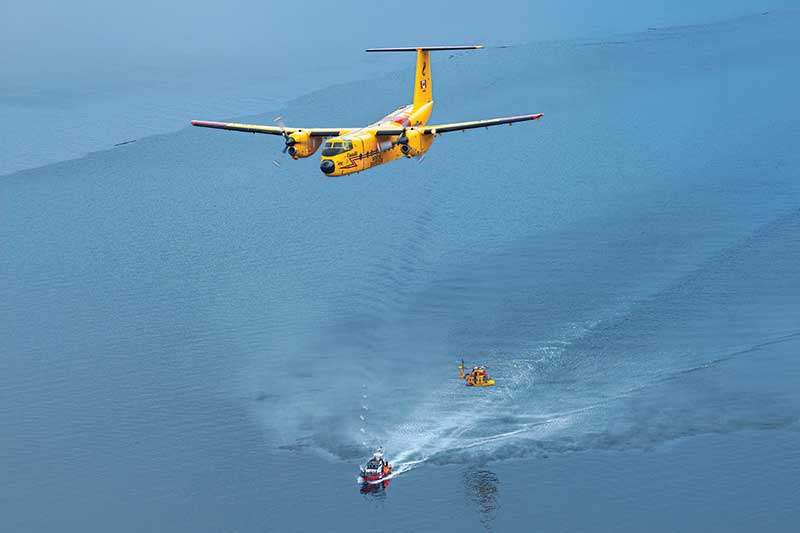 During its last operational flight, a Royal Canadian Air Force Buffalo search-and-rescue aircraft is joined by a Coast Guard vessel and a CH-149 Cormorant.
Derek Heyes

In the 2000s, 442 Transport and Rescue Squadron at Canadian Forces Base Comox on Vancouver Island became home to the final six Buffalo. But maintenance costs soared, and parts became hard to find. It was time for retirement.

“[The Buffalo has] been there
since before I was born,
and it just kept on going.”

On the final working flight, as his crew practised dropping sea rescue kits, Captain Fahim Awan recalled for Skies Magazine a life-saving drop in November 2021. A 14-metre boat had burned to the waterline and its crew was in a dinghy, fighting high winds and wild seas, in danger of being hurled onto rocks and swept away.

“It was a speck in the water [surrounded by] whitecaps,” said Awan. SAR techs dropped a 180-metre line to establish communications. The Buffalo crew could hear the desperation in the castaway’s voices. A fishing boat had come to their aid, but couldn’t safely get close enough to help. 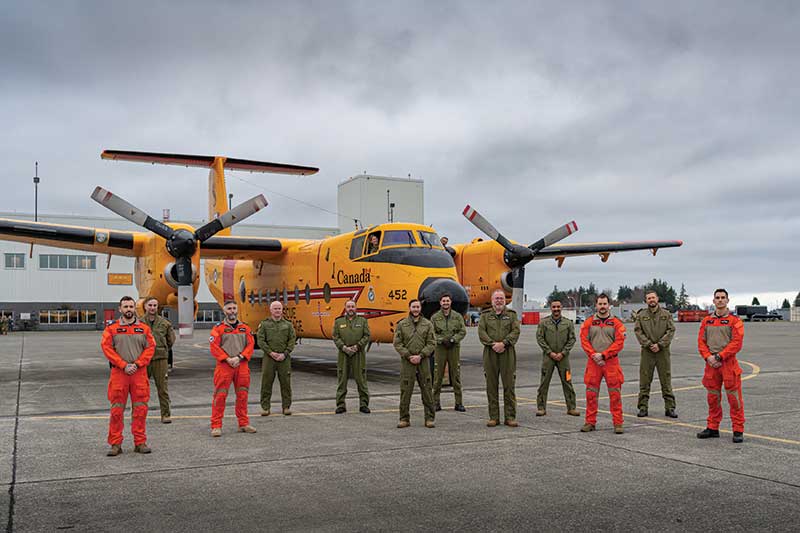 The Buffalo’s crew pose for a photo commemorating the occasion.
Derek Heyes

“I…got us down and dirty, low over the water,” said Awan. SAR techs dropped another 180 metres of line, connecting the vessels so the fishing boat could pull the dinghy to safety.

“That was probably the highlight of my career as a SAR pilot,” said Awan, though piloting a Buff’s final flight has also got to be high on that list.

Range of the CC-115 in kilometres

Maximum speed in kilometres per hour of the Buffalo

Maximum gross weight in kilograms of the aircraft