The aging brain—slower, but wiser

Everybody has lapses in memory —“Where did I leave my keys?”  “What is his name?” “What’s that word I need?” But once you pass the milestone birthdays of 60 and beyond, such questions raise the worry: “Could this be the first sign of dementia?” 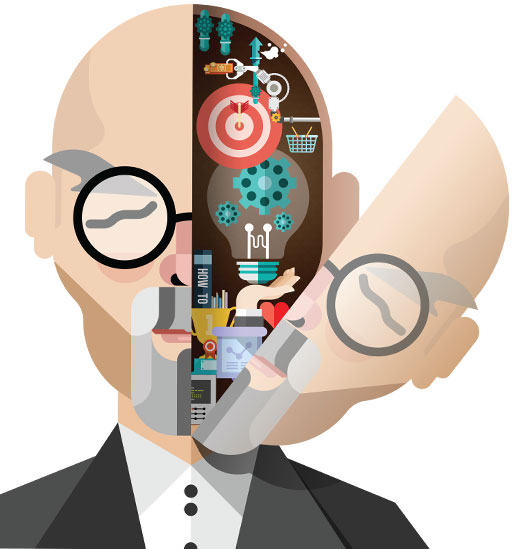 It is wise to be watchful, as risk rises with age. But we don’t need to feel doomed or helpless. Research is showing that although there are changes in structure and function, healthy older brains function well—albeit a little slower.

Research also shows we can take action to improve memory and cognition as we age. And as a result of research, more and better treatments are being devised to lower the risk of developing dementia, delay its onset and maintain more function as it progresses.

One in 13 Canadians aged 65 to 74 years old is affected by dementia, one in nine between 75 and 84, and one in four over the age of 85, according to the PONDER (Prevention of Neurodegenerative Disease in Everyone at Risk) program at the McGill Centre for Studies in Aging.

PONDER’s national network of 1,500 scientists, academics and physicians aims to change those statistics, in part by investigating how to prevent neurodegenerative disease in the first place. Their long-term studies will document healthy aging, identify things to prevent disease, pinpoint who’s at risk, and test effectiveness of cognitive training. By assessing differences in participants’ lifestyles, diets and exercise, researchers hope to identify things that can prevent or delay development of disease.

Some surprising results have come from recent brain research.

We take longer to understand technology, make decisions and remember facts because even in healthy brains the areas responsible for learning, reason and memory shrink and communication between brain cells is disrupted. As well, blood flow to and within the brain is reduced. And inflammation, which is involved in so many disease processes, can wreak havoc.

The human brain has developed some work-arounds for these problems—including some cognitive reserve to cushion against decline in function and recruiting alternate neural networks when one area of the brain can no longer complete its job alone.

“By midlife our brains have developed a whole host of talents,” Barbara Strauch, author of The Secret Life of the Grown-Up Brain, said in the Harvard Business Review. We’re much better at solving problems as we get older because our brains have laid down millions of memories and interconnected pathways, allowing us to focus on solutions, rather than problems. Older brains recognize patterns faster, make better judgements and recognize unique solutions. And we express our thoughts better due to the rich vocabulary built up over a lifetime.

The healthy aging brain is also stronger than we were once led to believe. Neurologists at the Massachusetts Medical School and General Hospital have debunked the notion a goodly portion of our brain cells die off as we age. They discovered the brains of healthy people who died in their 90s had as many brain cells in the regions governing memory, cognition and problem solving as those who died between 57 and 60.

Exercise, sleep and a healthy diet are all important for brain health. But for seniors these can be problem areas.

Deep sleep helps consolidate and lock away long-term memory, but as we age, we get less deep sleep.

The Canadian Physical Activity Guidelines for those aged over 65 call for 150 minutes of aerobic activity per week (or about 20 minutes a day) and muscle-building activity twice a week.

Getting enough nutrition can be a challenge when coping with heartburn, constipation, a slower digestive system or side effects from medications. As we age, our sense of smell and taste diminish, along with appetite.

Statistics Canada reports a third of Canadians over 65 are at nutritional risk through such things as shirking vegetables or skipping meals. Aside from the healthy eating advice in the Canada Food Guide, the Alzheimer Society of Canada recommends a diet rich in the brain-healthy nutrients vitamins D, B6, B12 and folate.

When it comes to brain health, there’s plenty to cogitate.