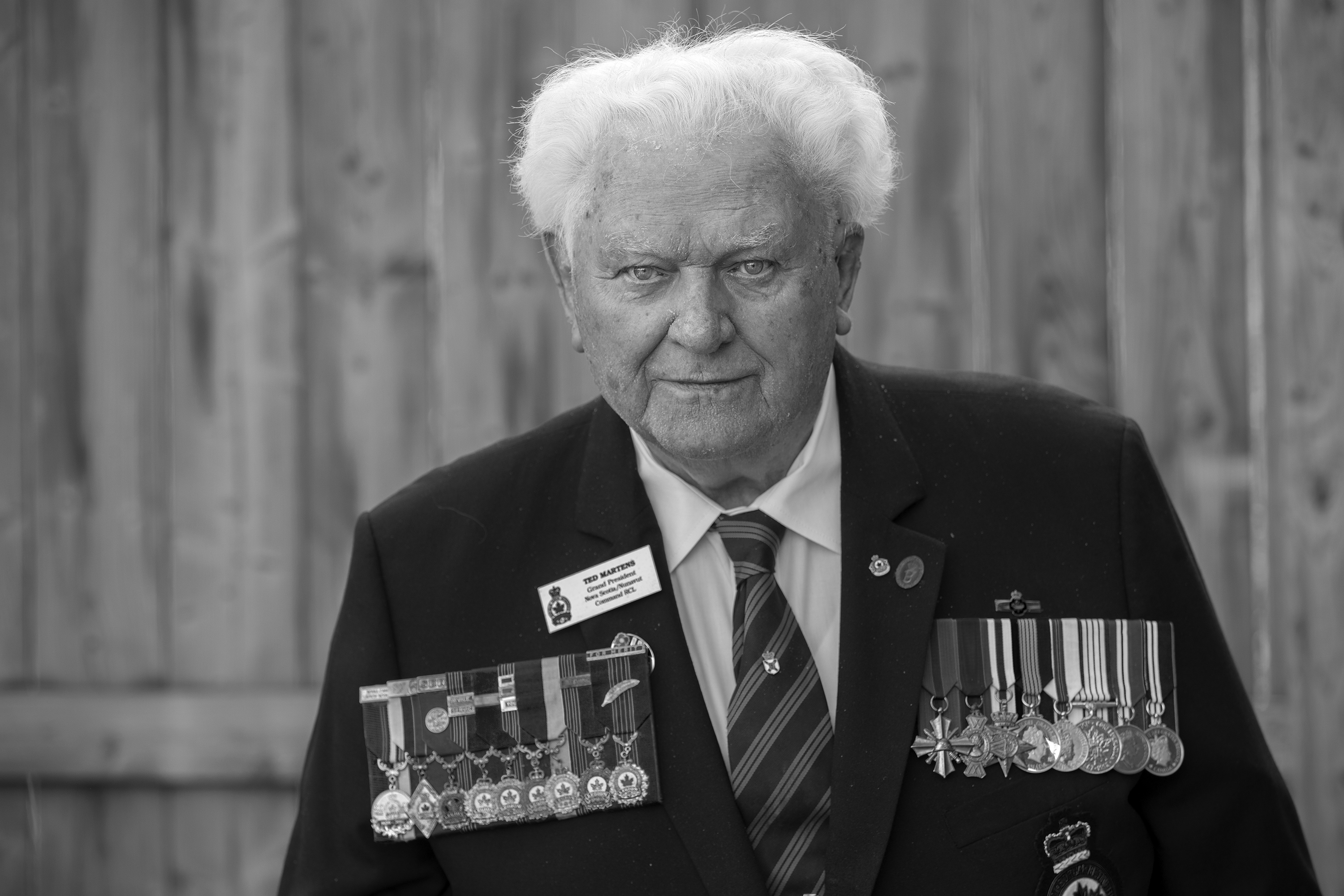 Martens was captured early in 1942 and came within a hair’s-breadth of torture and execution at the hands of German troops. But the strapping Dutchman staged a daring escape and later joined British forces in the drive to liberate his homeland from Nazi tyranny.

The youngest of eight children born on a dairy farm, Martens was just 18 when he and a handful of friends mounted a resistance cell around their village of Neerbosch, less than 20 kilometres from Nijmegen.

Martens had a year of small-college education under his belt. But his plans to follow three uncles into law had been handed a double-whammy: first, the Germans took over the campus; then the Americans bombed it by mistake.

“So we started a little bit of a resistance group,” he recalled during a recent interview with Legion Magazine in his adopted home of Nova Scotia. “There were five or six of us, I think, when we started. We were all young bucks.”

Lacking access to explosives, they pulled railway spikes, rendering tracks crooked. In 1943, they stole a cache of weapons from a German depot.

But their specialty was forging identification and travel documents that would help the Dutch underground pass through German checkpoints. They also helped Dutch citizens escape German labour camps where men between the ages of 18 and 40 had been sent.

They did this by rolling warm, unshelled, hard-boiled eggs over Nazi stamps—such as the eagle and swastika—on genuine documents then rolling them back over blank paper. The heavy, dark-blue ink would transfer, albeit somewhat faded and sometimes yellowed. They would alter the false documents as needed.

“We did almost anything we could to upset the Germans, which probably didn’t make one can of beans to the war effort,” said Martens, who turns 96 in August. “However, we took a good number of boys who were in Germany with no leave and no passes, and we made them passes.”

Martens was granted a one-year deferment from German labour because he ostensibly worked on a farm. Eventually he was pressed into service and managed through a German farm equipment salesman whom his father knew to get posted just across the border a few kilometres from home.

He could report to work on Monday morning and return home on Friday night, and was thus able to continue his resistance efforts, providing falsified documents to Dutch slave labourers who could then, in turn, escape.

Martens travelled as far as Dusseldorf and Dortmund, more than 150 kilometres away, where he provided numerous Dutch labourers with the papers that would enable them to clear German checkpoints and escape back into Holland.

“I crossed the border with one of them,” said Martens. “He was right behind me. The [German guard] let me go by. He looked at the papers of the other young fella and said ‘where’d you get that?’ Instead of saying ‘I dunno, the boss gave me that,’ he said ‘from him,’” motioning toward Martens.

Later, he was standing next to a urinal—a circular enclosure with a trough inside and a single entrance. He asked a German Panzer officer if he could use it. The German told him to go ahead.

“So when I got in, there was an opening about this wide with a screen in it,” he recalled, spacing his hands about shoulder-width apart. “I kicked the screen out and went out of the thing on the other end.

“I made my way back across the border. I didn’t go through the legal border system.”

He got home and immediately went underground, sleeping in sheep sheds and hay barns, wherever he could, all the while working for the resistance.

Once, he had come home for supper when a Gestapo vehicle came ripping up the laneway. Martens’ mother grabbed his plate off the table and hid it in the stove.

Martens slipped out the back and hid in the henhouse as the Gestapo officers entered the kitchen and began questioning his mother, who denied any knowledge of his whereabouts.

He went on to rescue an Allied flyer during the battle of Arnhem, depicted in the movie A Bridge Too Far. He got him to change out of his uniform and get on a bicycle, then he delivered him to Allied troops nearby.

Martens ended up working with British forces, donning a uniform and guiding them through the Dutch countryside. Eventually, he was stationed on a dike along the Waal River outside Nijmegen.

In March 1945, two months before the war in Europe ended, he was shot in the leg while on a patrol. He spent three weeks in a Belgian hospital, followed by a stint in rehab before returning to a Dutch unit.

In 1946, he joined a Netherlands division headed for Indonesia—120,000 troops. A Dutch colony since the 17th century, it had been invaded by Japanese forces in 1942. It declared independence from the Dutch at the war’s end, and a bloody four-year revolution ensued.

By 1949, international pressure essentially forced the Netherlands to recognize Indonesian independence, spelling the end for colonial administration of the Dutch East Indies.

Martens fought with the Dutch forces for three-and-a-half years, returning home in 1950. His father had died, his brother was running the farm, everything and everyone had changed and he couldn’t get along with any of them.

His wife was Joanna Peperkamp, a neighbour he had recruited early in his days with the resistance. Her Dutch father was in a German prisoner-of-war camp and her mother was German. The scrawny 18-year-old was fluent and she proved an invaluable asset falsifying Nazi travel and identification documents.

They married just before Martens shipped out to Indonesia. Now he wanted to go to Australia, but Australian immigration was overflowing and new immigrants were being placed in camps until they were processed. Joanna said no, so he suggested Canada. She agreed.

He appeared before an immigration board and one of the members asked him where he wanted to go. “Ontario,” Martens replied.

Everybody wanted to go to Ontario, he was told. “Why don’t you go to Nova Scotia? Nova Scotia is 50 years behind the rest of Canada, but it’s coming. Ontario has a long trough with a whole bunch of pigs on it, and when you pour in the slop at this end, it gets pretty scarce by the time it reaches the last pig.”

That’s all Martens needed to hear. He settled in St. Peter’s, in southeastern Cape Breton, where he worked for a farmer. “It wasn’t much of a farm and he was in the wine all the time.”

He stayed a month, then went to work for a car dealer who owned a farm with an ox, a crippled horse, an old tractor and a sheep. He managed it for a year, then bought it through the Soldier Settlement Board and the Veterans’ Land Administration, which among other things provided veterans with help settling in Canada as farmers or fisherman.

Farming proved a challenge, however, and Martens bounced around different jobs until he settled in at a mill owned by the Finnish forestry company Stora. He worked there for 25 years. 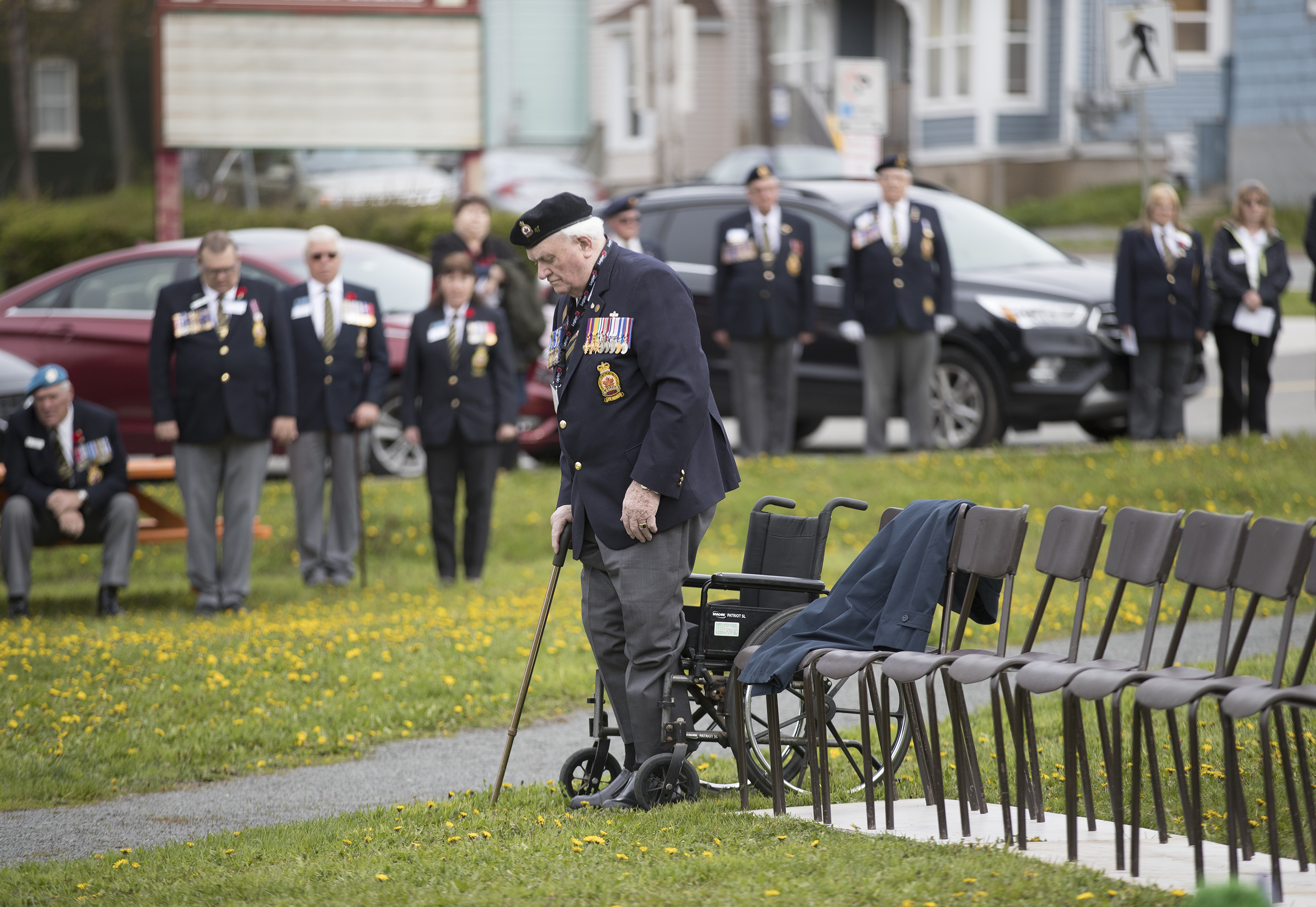 Ted Martens was a Dutch resistance fighter during the Second World War.
Stephen J. Thorne
“When I did it, when I was involved [in the war], I thought it was OK,” said Martens. “Now that I’m old and broken down, I [wonder] what good did we do? When you see your best friend torn in half by a mortar shell, something happens.

“That’s human nature. In Indonesia, they buried 6,000-7,000. Those are the ones who are dead, not the ones who got home mentally scarred or physically scarred—for what?”

An award-winning journalist, editor and photographer. He has reported on the downfall of South African apartheid and from war fronts in Kosovo and Afghanistan.
All Posts
PrevPrevious ArticleEuphemisms, acronyms and outright lies: The language of war
Next ArticleLast men standingNext