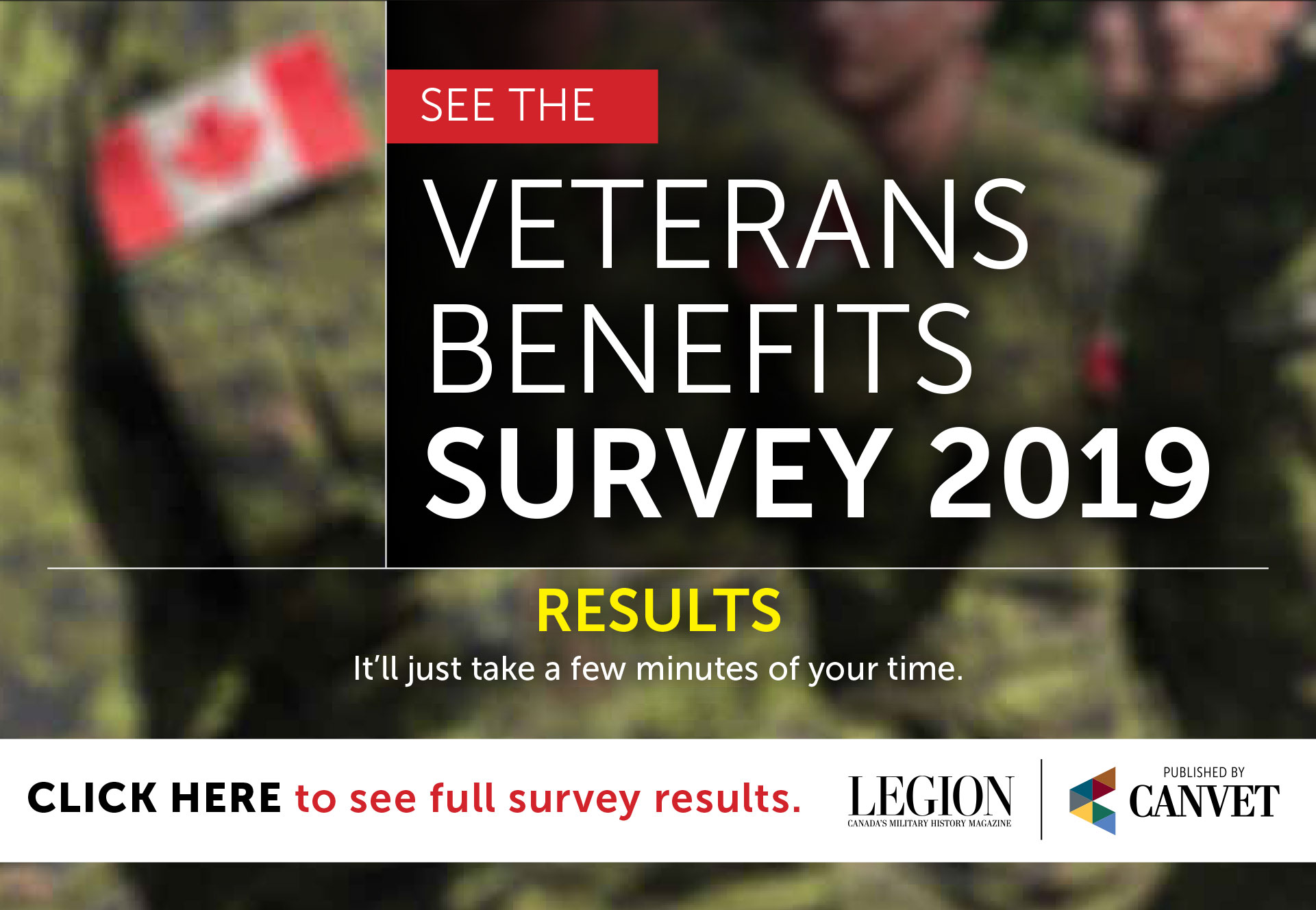 Nearly 60 per cent of respondents to an online survey conducted on behalf of Legion Magazine said the country’s veterans are poorly served by Veterans Affairs Canada.

Almost 75 per cent, or 952, of 1,275 respondents to the non-scientific survey identified themselves as veterans. The survey was conducted on Twitter, Facebook and on the magazine’s website at legionmagazine.com from May to October 2019. An ad in the July/August issue of Legion Magazine asked readers to fill in the survey on the website.

Legion Magazine conducted similar surveys in the magazine in 2013 and 2014, resulting in nearly 2,200 responses the first year and 449 responses in the second.

The survey asked 15 questions. To the query “Are Canadian veterans well served by Veterans Affairs Canada,” 58.67 per cent of respondents said they are poorly served, fewer than a quarter (24.94 per cent) said veterans are “adequately served” by the federal department; less than eight per cent (7.76) said they are well served.

Discontent was palpable, with wait times and a complex benefits application process plagued by excessive bureaucracy the chief complaints among 751 written comments and suggestions.

“Too many forms to fill,” said another on Aug. 20. “Duplication of services between civilian doctors and VAC doctors, who always reduce the severity of the medical condition when they know nothing about the veteran’s condition.”

The same respondent said civilian doctors have to fill in paperwork every two years confirming that a chronic medical condition still exists. The respondent also said their own hand-delivered forms have twice “miraculously disappeared inside paper-choked VAC,” leaving the onus on the veteran to restart the process.

There was qualified anger among the written responses: “Wait times for decisions are atrocious and so are the wait times for phone calls,” was a comment on July 14. “I truly believe that the staff are doing what they can; there just isn’t enough of them to serve the numbers of personnel who require help.”

And there was outrage: “Stop treating veterans like they are guilty when we are trying to claim benefits,” wrote a respondent. “VAC treats us like we are trying to cheat the system. Just give us what we know we are entitled to.” 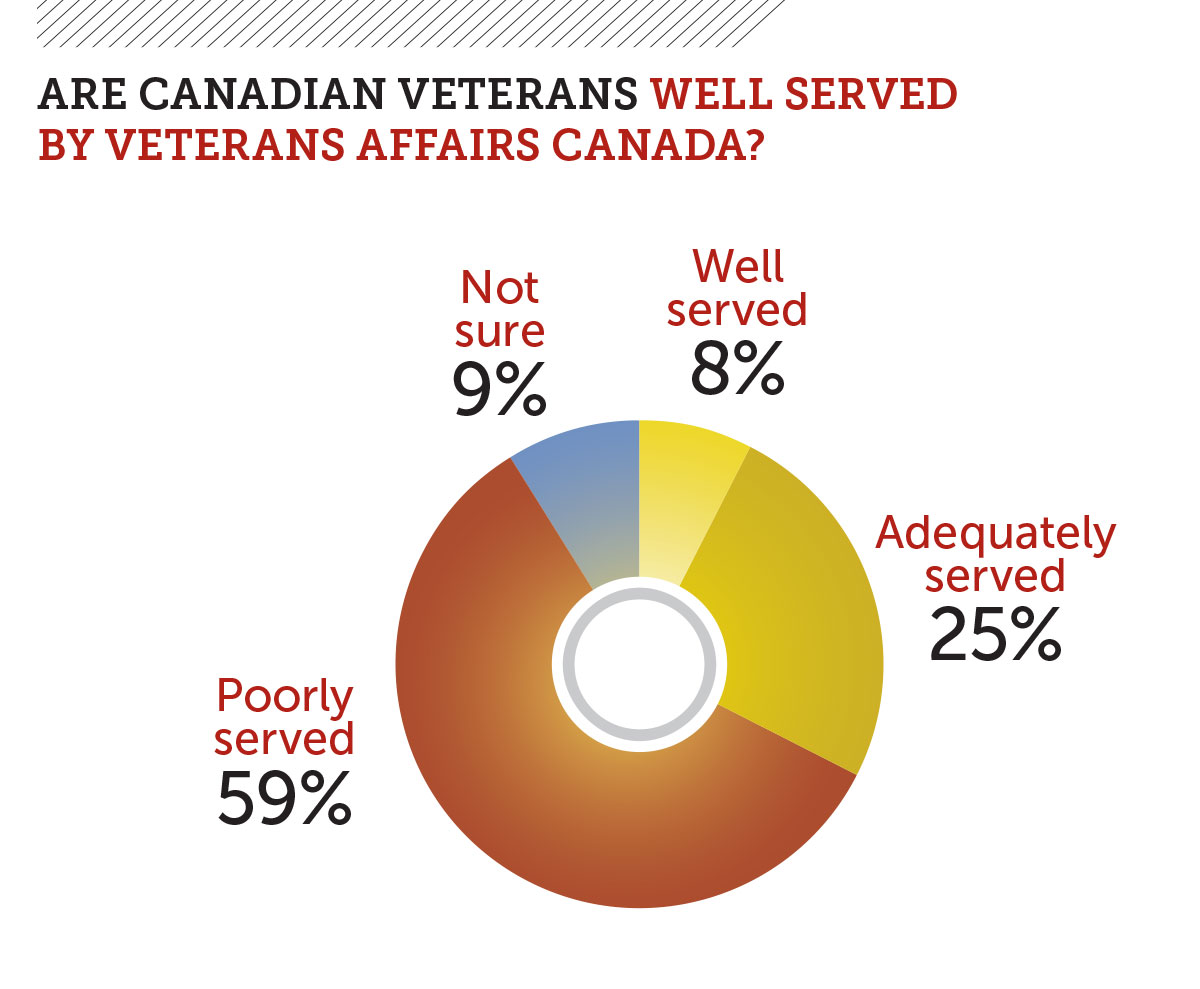 There was also plenty of advice: A respondent said the shortage of front-line staff “can be dispiriting and depressing to some, with actual health implications. Decisions should default in favour of the applicant, NOT in favour of bureaucratic denial.”

Another respondent called on VAC to “quit putting stuff on the internet or website and just have staff available to answer questions.”

“Quit expecting people to navigate a maze of crap to get a question answered,” they wrote. “Not everyone is tech savvy enough to know where to look for answers to questions. Double or triple or quadruple staff at Veterans Affairs to answer phones and give answers to questions.”

“I think that all the benefits received should be tax-free,” wrote another respondent. “Currently the amount of taxes paid are straining us financially.

But for many, the survey comments simply offered the opportunity to vent.

“The process timing is long and arduous,” wrote one respondent. “There is little feedback through the stages. Secure e-mails take weeks to be addressed, after a tertiary auto reply. I’ve been sent by them to different bureaucrats; seems like they are not very co-ordinated or really know what the other hand is doing.”

“I have been well served by VAC but my problem was not complicated or very serious,” wrote a respondent on July 15. “I hear many stories of younger vets having great difficulty with VAC.”

“Why can RCMP veterans not get assistance to stay in their homes?” asked one respondent. “When will policy change to get spouses after age 60 benefits upon our death?”

More than 60 per cent of survey respondents said it was “difficult” to understand the application process for a disability benefit or services from VAC. 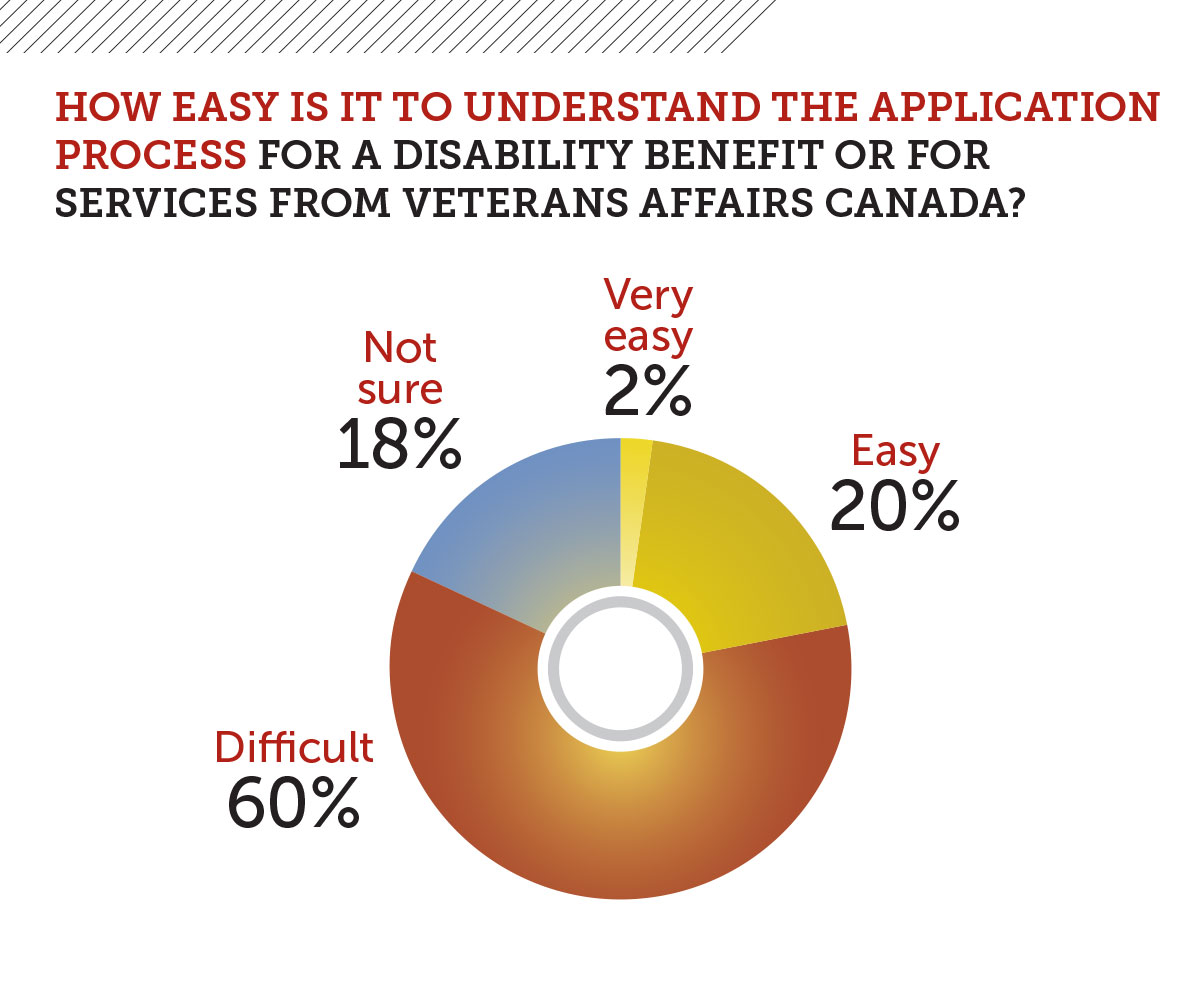 Indeed, there was a thread of sympathy for what some survey respondents characterized as overloaded personnel and high expectations at VAC.

One respondent said there are “very dedicated, excellent public servants at VAC. The improvement opportunities are with the culture and executive leadership of the department. The senior leadership of the ministry is subpar.”

“Veterans Affairs cannot do everything for everyone,” declared another writer. “I have been treated fairly. The fact that it takes a few weeks to process a file is standard. Because they are dispensing taxpayers’ dollars, there must be checks and balances. That takes time to administer. So whatever staff are needed to handle a 30-day, or even a 60-day, turnaround is what they should have.”

The survey addressed other issues:

• half of respondents said their income from all sources has not kept up well with the cost of living; 42 per cent said it has;

• a third said the Veterans Independence Program has been helpful or somewhat helpful in allowing them to stay home;

• more than half (51.8 per cent) of eligible veterans rated the continuity of care transition under the New Veterans Charter as poor; 31 per cent said it was fair; 14 per cent rated it good; three per cent called it excellent.

“Overall, VAC has been quite good in assisting with my dad’s care,” said one respondent. “I’m frankly appalled by the manner in which many younger veterans have been treated in seeking care and redress. There is a bean-counter mentality that is both childish and cruel in decisions that, by times, appear arbitrary and inflexible.”