Home » Our Veterans » Remembrance » Shipping out 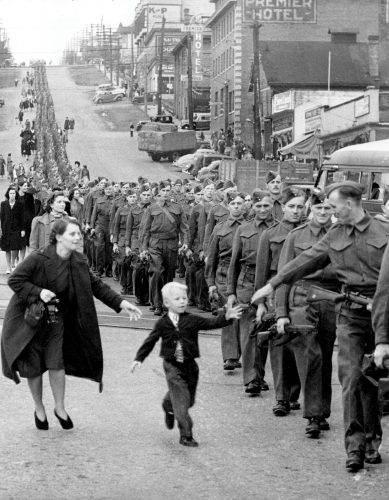 Young Warren (Whitey) Bernard breaks from his mother Bernice and reaches for the outstretched hand of his father Jack, who was headed for training with The British Columbia Regiment (Duke of Connaught’s Own Rifles) in Nanaimo, B.C., before shipping out for Europe.
Claude P. Dettloff/The Province/Wikimedia

No matter what era, the moment when a soldier ships out is laden with bittersweet emotion—excitement, uncertainty, pride and trepidation

For soldiers and those they leave behind, shipping out is all about goodbyes. Iconic photographs of wartime goodbyes the world over tend to focus on loved ones—family and friends massed dockside to bid farewell to waving soldiers swarming a ship’s deck; American soldiers and sailors, filled with bravado, kissing their girls on the steam-clouded platforms of New York’s Penn Station; troops milling about on a tarmac, waiting with stoicism to board a transport flight while family members wave from behind barriers.

Mothers and fathers, wives and sweethearts, family and friends. Perhaps no goodbye is more wrenching than that of a son or daughter.

Canada, a young nation, found its iconic adieu in Warren (Whitey) Bernard, 5, (right) breaking from his mother’s grasp to reach for the outstretched hand of his marching father, Private Jack Bernard, a rifleman with The British Columbia Regiment (Duke of Connaught’s Own Rifles). Jack and his brothers in arms were marching off to war down 8th Street in New Westminster, B.C.

It was Oct. 1, 1940. Germany had conquered Europe and was at Britain’s doorstep. In 1944, Jack landed at Juno Beach on D-Day and fought all the way to Germany. He survived the war, but his marriage didn’t. The photograph, entitled “Wait for Me, Daddy,” was one of the last of the Bernard family together. 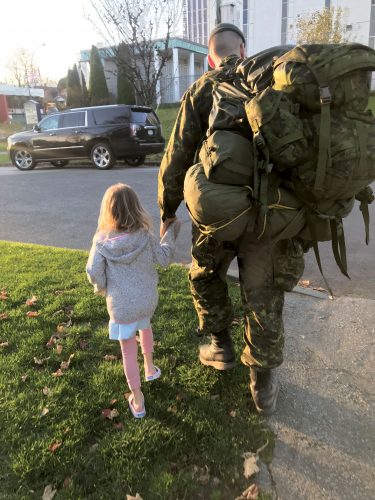 Military life can be a constant rotation of departures and arrivals. Private Dryden MacLeod with the Royal Westminster Regiment reunites with his five-year-old sister Lola after a training exercise. The oldest of five children, MacLeod is continuing a long military family history. He accompanied a Canadian battlefield tour several years ago and was the first of his family to visit his great-uncle’s First World War grave in France.
Courtesy of Cass MacLeod

In 2014, Warren, by then an 80-year-old retired businessman living in Tofino, B.C., wrote about those days in The Guardian. He said he didn’t remember photographer Claude Dettloff of The Province taking the picture, but he sure remembered the fuss after it appeared on the front page the following day.

The image was published all over the world. Warren would go on to appear in victory bond drives, a blond boy in blazer and short pants appealing to the masses to “buy bonds; bring my daddy home.”

The photograph hung in every B.C. school for the war’s duration. It was depicted in a statue, reproduced on a coin and emblazoned on a stamp.

After attending the statue’s 2014 unveiling, Warren said the emotion evoked by the photograph was overwhelming. Said another veteran, “It’s not about war and blood and guts and guns. It’s about the families who get left behind.” 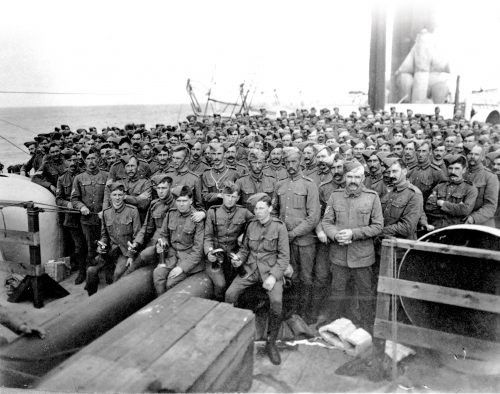 Members of Lord Strathcona’s Horse (Royal Canadians) make their way to fight in the Boer War aboard SS Monterey. They sailed from Halifax on March 17, 1900, and fought with the 3rd Mounted Brigade and 4th Infantry Brigade, II Division, until January 1901.
LAC/C-000171 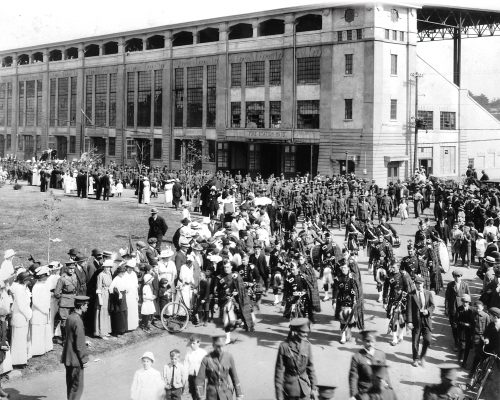 The Princess Patricia’s Canadian Light Infantry marches out of Ottawa’s exhibition grounds on Aug. 28, 1914, destined for war. Raised by Captain Andrew Hamilton Gault, it sailed from Montreal aboard SS Megantic and was the first Canadian infantry unit to enter the theatre of war, arriving in France on Dec. 21, 1914.
LAC/C-006258 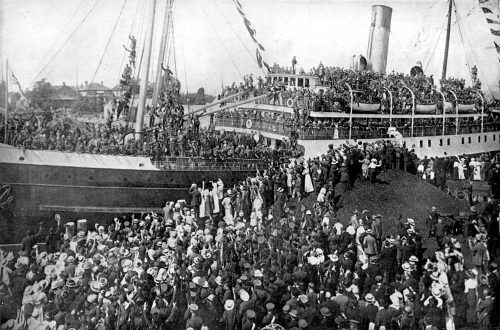 Well-wishers crowd Victoria Harbour in 1914 to bid farewell to the first troops leaving from British Columbia on SS Princess Sophia to fight in Europe. The ship sank on Oct. 24, 1918, after colliding with a reef during a voyage from Alaska to Vancouver. All 364 people aboard died in what remains the deadliest maritime disaster in British Columbia history.
The Print Collector/Alamy/T8RKBY 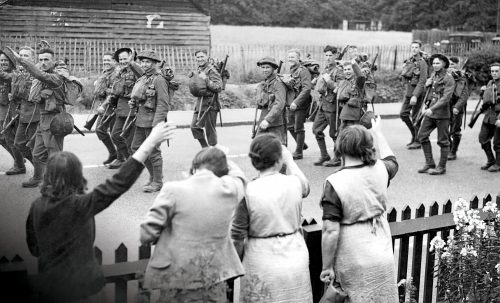 Women wave goodbye to troops “somewhere in England” as they march off to war on Sept. 21, 1939. Farewells like this were common the world over during both world wars.
Chris Ware/Keystone/Getty/3364498 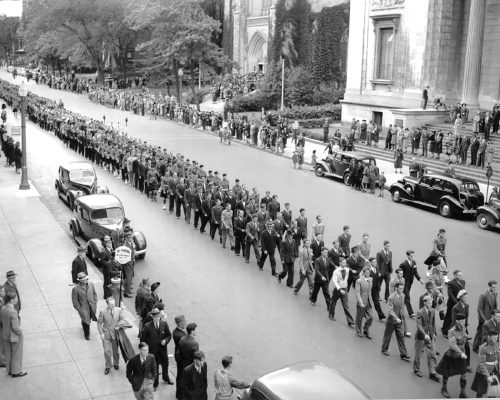 Black Watch (Royal Highland Regiment) of Canada recruits clad in military and civilian attire march in Montreal (left) after the regiment was called to service in 1939. It would spend two months in Newfoundland before embarking for England in August 1940. Three platoons were in on the 1942 raid on Dieppe. The battalion returned to France in July 1944 and fought in Northwest Europe until war’s end.
Courtesy of Tim Cook 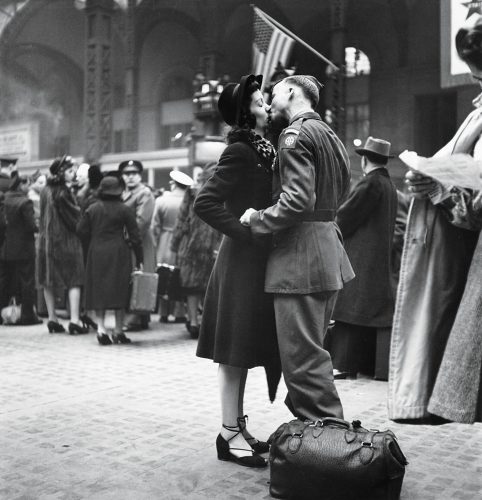 A couple in New York’s Penn Station share a farewell kiss before they are separated by war.
Alfred Eisenstaedt/The LIFE Picture Collection/Getty/72430816 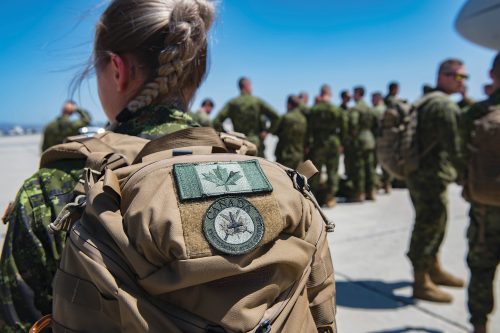 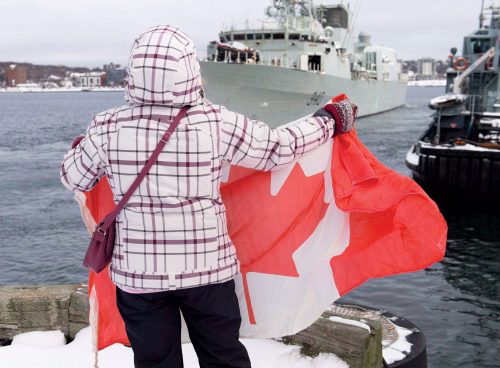 A family member holds a flag as HMCS St. John’s deploys to the Mediterranean Sea on Jan. 16, 2018, to participate in Operation Reassurance, part of a NATO mission to promote security and stability in central and eastern Europe.
Andrew Vaughan/The Canadian Press/CP16230

The Royal Canadian Legion 2013 Pilgrimage of Remembrance: The Pilgrims’ Watch The Korean Miracle: Marking 60 Years of Peace in a Place of Enduring Conflict On My Honour Normandy Tour: Juno Beach Route

An award-winning journalist, editor and photographer. He has reported on the downfall of South African apartheid and from war fronts in Kosovo and Afghanistan.
All Posts
PrevPrevious ArticleService & Devotion
Next ArticleDolls for small handsNext